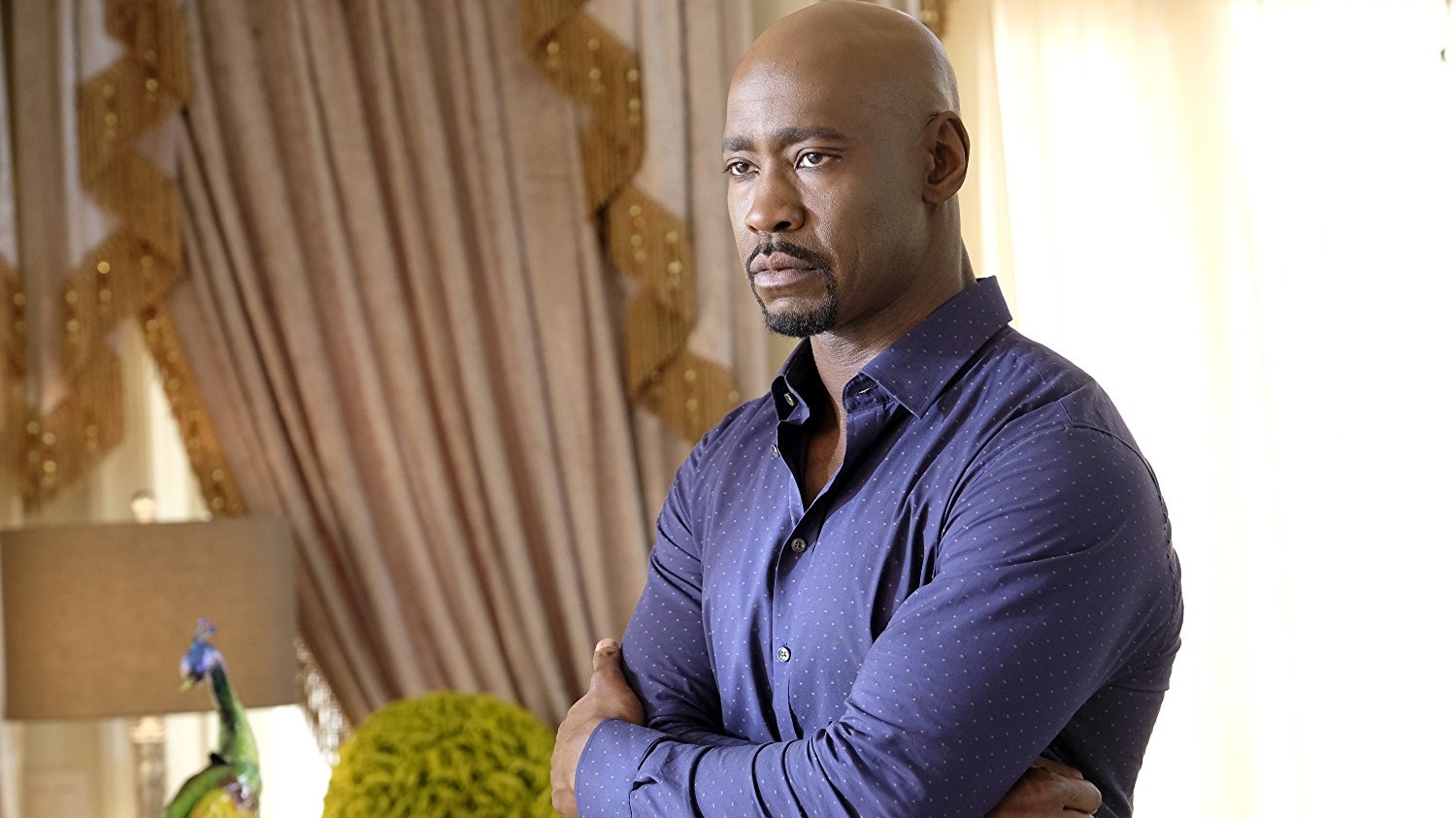 Lucifer delivers an entertaining origin episode that takes place in 2011 when he first vacationed to “City of Angels?” This has been an incredibly uneven season where arching narrative was concerned. On the other hand, there have been several great episodes carried by the Lucifer bench. Maze and Doc Martin both had fantstic role-centric stories but it’s D.B. Woodside’s Amenadiel that really shines in “City of Angels?”

The story begins on a lovely Los Angeles afternoon in 2011. Lucifer is on vacation from hell, a little out of fashion, but searching for pleasure and ready to party. It doesn’t take the Prince of Good Times long to gather a posse of pleasure seekers, pop a cork, and dive into deep adult fun. Fast on his heels, Amenadiel puts the party on pause and informs Lucifer he must return to hell immediately. Amenadiel waits outside when Lucifer asks for a couple of minutes to say a proper good-bye. 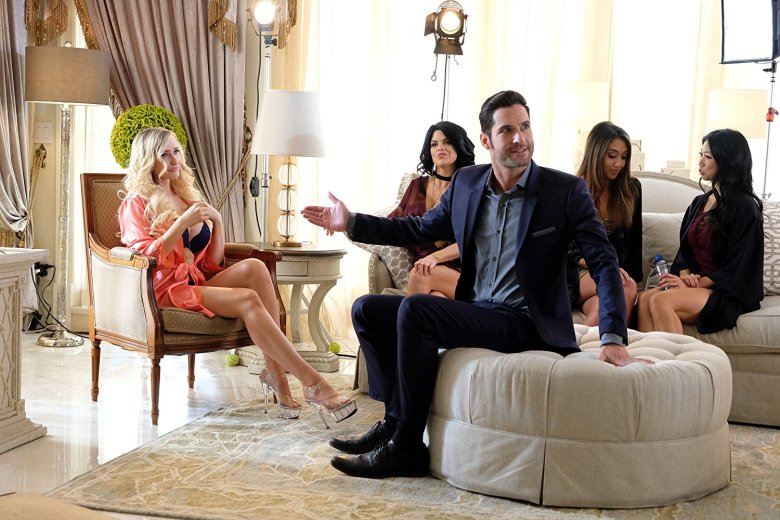 Chloe Decker is the desk sergeant, this is before she passed the detective’s exam but during her marriage with Dan. It’s a hilarious scene, Amenadiel presents a rendering of his assailant that looks most like a child’s sketch of a jack-o’-lantern. He doesn’t know about the murder, but he reports his necklace stolen. It has divine significance and he can’t leave it in human hands. Dan calls Chloe and interrupts the theft report. Besides being late for dinner, Dan caught a murder at the same location as Amenadiel’s mugging. Chloe considers the two cases might be connected but Amenadiel already left the station.

Amenadiel returns to Lucifer’s place to ask for help. He doesn’t feel right leaving Earth without the necklace and he concedes Lucifer knows more about humans than he does. Lucifer agrees, he loves LA, but he makes a bargain with Amenadiel for his assistance; if he recovers the necklace, Amenadiel will owe Lucifer a favor to be named later. Amenadiel is self-righteous and naïve, he agrees to the terms. Lucifer finds his trade mark convertible and they drive to their first stop, a beach lounge. Lucifer is just messing around and Amenadiel gets anxious with the lack of progress, but they catch a news update about the murder. Amenadiel recognizes the victim, the jogger who insulted him, a local MMA fighter named Aiden Scott. 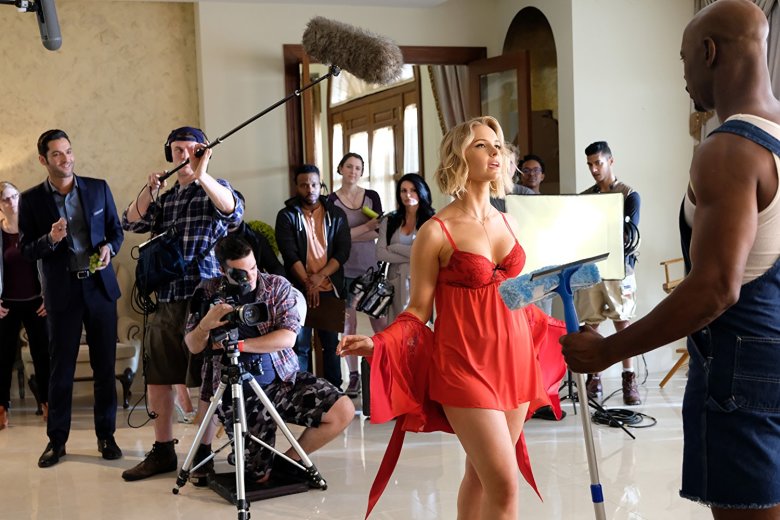 Amenadiel is confused for the actor playing the role of “Window Washer” in Misty’s next scene. They put him in wardrobe and send him out for the BJ shot which he blows by asking Misty who might have wanted to kill Scott. Misty can’t imagine anyone would want to hurt him. He was always nice to her and his fellow fighters respected him. She knows he was very excited about a big fight he had coming up but someone wanted him to throw it. 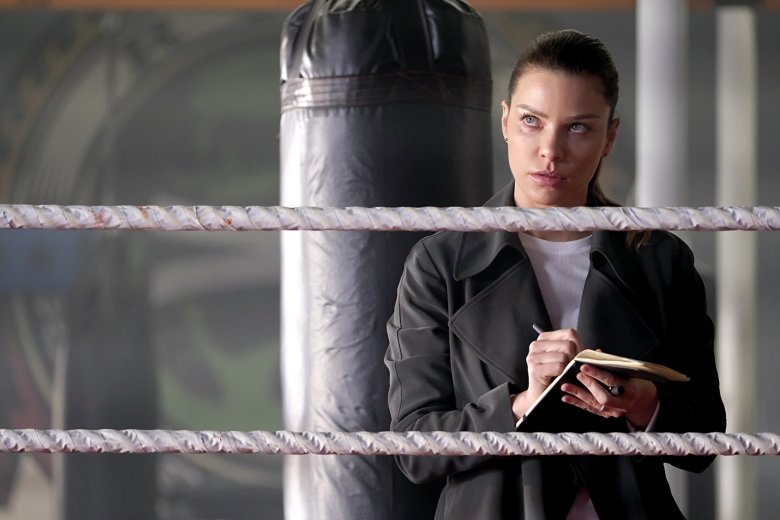 Lucifer deducts he was murdered for not going along with the plan. Chloe interviews Gil, the man who trained Scott at the gym. He also has nothing but good things to say about the fighter but he does admit he recently had an argument with a promoter named Tio Sorento. Chloe heads to Sorento’s place, Rico’s, an octagon fight venue for women. Lucifer arrives at the same time and instantly feels different around Chloe. Series Plot Point; this would pre-date anything Lucifer would do in the near future to anger his father.

Chloe identifies herself as LAPD and chases down one of Tio’s thugs while Lucifer and Amenadiel talk to the promoter, Tio, about booking Amenadiel for the fight Scott had scheduled. Amenadiel trains to show the proper amount of strength and impresses Tio. Lucifer baits Tio into asking if Amenadiel would consider throwing the fight for a big payoff. They grab Tio and take him someplace quiet for questioning. When Amenadiel strikes out, he asks Lucifer to torture Tio for information about his missing necklace. Lucifer explains he doesn’t really conduct any of the punishments personally and calls on Maze to rip the answers from him. Maze loves the almost infinite expanded freedoms available to choose her method of extraction while on Earth. 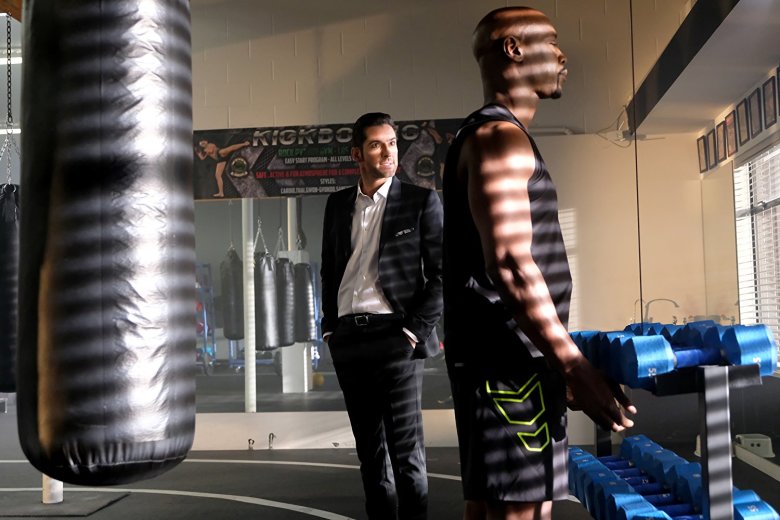 Tio admits he wanted to set up the fight, but someone else got to him first. He doesn’t know anything about Amenadiel’s necklace either. For now, the best plan is to go through with the fight and see who shows up with the payoff. As Amenadiel gets ready to step into the ring, he thanks Lucifer for helping with the recovery effort and says he knew his evil mind would think of something useful. These words hurt Lucifer and he steps into the ring for a brotherly fight. They both give and take quite a beating, Lucifer gets the worst of it but Amenadiel still throws the fight.

Chloe pressure’s Tio’s lawyer, Charlotte Richards, to advise a cooperation deal. Dan doesn’t think it will pay off but he and Chloe stake out the drop area. Tio puts the money in a locker and a few moments later, Gil arrives to collect it. Chloe chases him but Lucifer and Amenadiel get to him first. Gil freaks out when he sees Amenadiel, the man he shot three times point blank, alive and well. He confesses to shooting Scott and stealing the necklace as well. They recover the necklace from Gil’s gym and send him back to the locker where he confesses Scott’s murder to Chloe and Dan.

Amenadiel thanks Lucifer for finding his necklace and tells him it’s time to go back to hell, but he reminds Amenadiel he owes him a favor. Lucifer stays in LA, takes over Rico’s club and renovates it into Lux. Lucifer asks trusty Maze to cut his wings off and burn them at the beach. I don’t think we needed this episode to answer any burning questions, but it was a lot of fun and entertainment value is always a perfect reason for television.