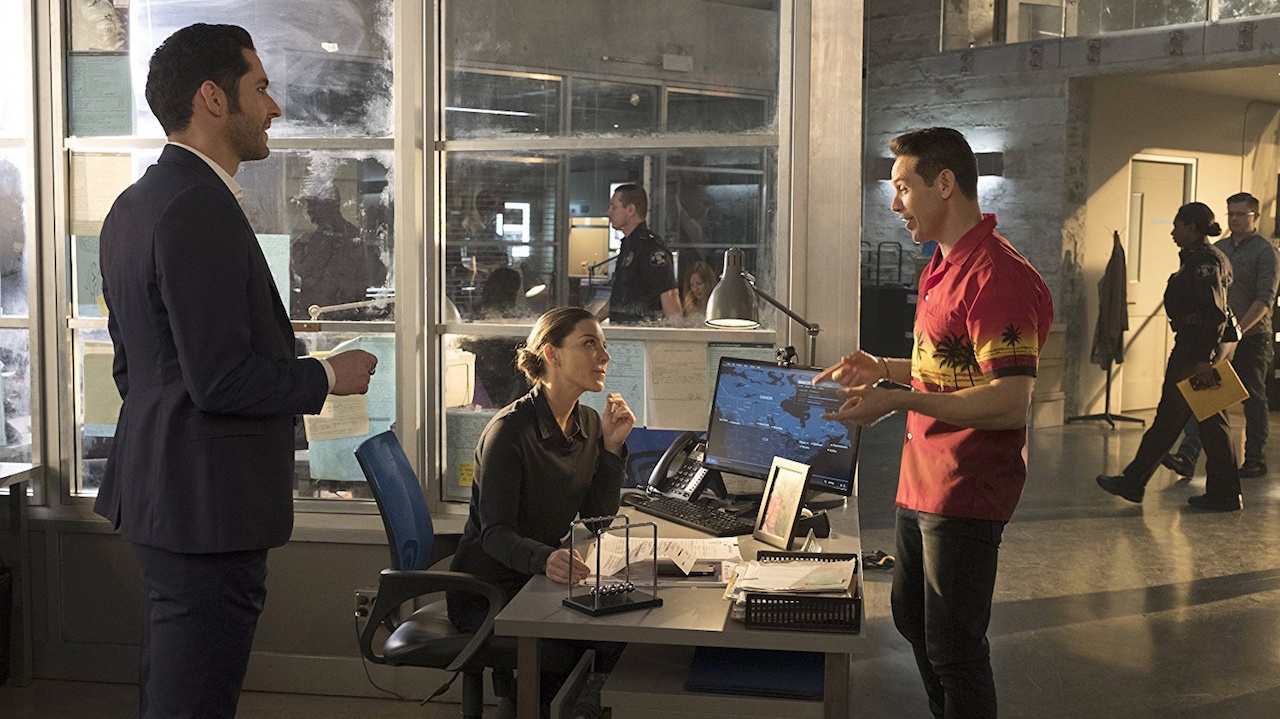 Lucifer taps a hard hitter from its bench to hunt a devious serial killer in “Mr. and Mrs. Mazikeen Smith.” Great shows keep deep character benches they can count on to boost the season’s momentum. Maze makes her third season debut in a great Maze-centric action-thriller. Our favorite demon is on a quest to find her place in a world where everyone else has a soul. The fact that Maze just dies when she dies is enough thematic material for its own narrative.

“Mr. and Mrs. Mazikeen Smith” is a stand-alone episode that has nothing to do with Lucifer’s ongoing search for Sinnerman. The story drapes over a standard marshal-tracks-deadly-criminal armature. Maze, the bounty hunter, is restless and wants to hunt the trickiest human possible. Lucifer is genuinely concerned about her happiness and supports her decision. He suggests she check in with Lt. Herrera, the head of the LAPD organized crime task force for the most difficult targets. 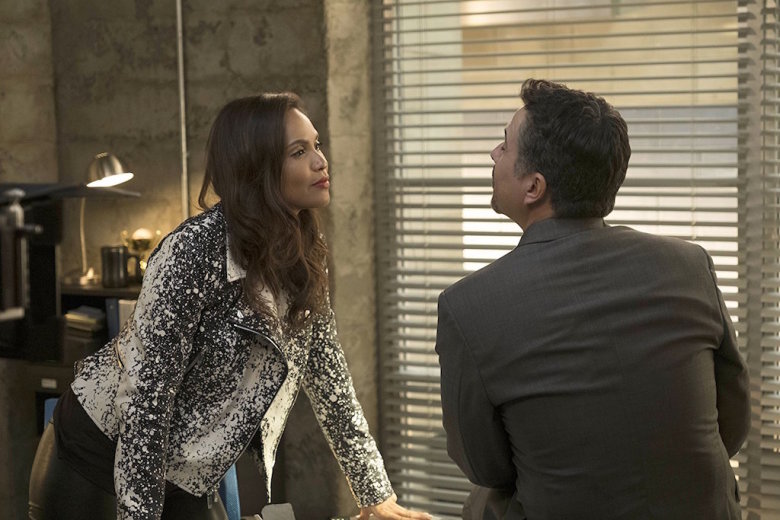 Maze breaks into Herrera’s office and finds a suitable subject, Ben Rivers, a viscous killer that’s eluded Herrera for years. Herrera looks serious, but he has peculiar reactions. He warns Maze that Rivers is a dangerous target but he also gives her his latest leads. Maze heads to Canada to catch the killer’s scent. Meanwhile, Dan cashes in his miles and burns some vacation time in Hawaii. Chloe pulls pure support duty this week, they still haven’t figured the best way to weave her into weekly stories. This is what happens when a character has no real personal demons and few professional demons, which is ironic in a show top-lined by the Prince of Darkness and his protector demon.

Maze isn’t prepared for the cold weather, it takes her a few scenes to adjust to Canada. She starts by stealing a puffy coat off a ski-slope jerk, and proceeds to leave a trail of misbehavior across Canada. Maze rattles Norm, a polite hotel clerk, who fears trouble from his wife. Rivers went to Whistler with a wealthy young woman, Muffy… for real. Maze tags in for Muffy’s masseuse and kneads the location of their next date from her. Muffy thinks Rivers is a prince and he promised to show her his secret castle. That sounds right. the ‘ol secret castle.

Rivers finds Maze wearing a “Muffy” type wig and strikes up conversation. Maze is quick to cuff Rivers to the bar but he does little to protest. Rivers says he knew someone would catch him at some point but he didn’t think it’d be someone he recognized, a runner. Though Maze has no soul, she is interested and listens well enough for tricky Rivers to slip the cuffs off his wrists and onto Maze. Rivers leaves Maze intrigued, not disappointed, he is the challenge she was hoping for. 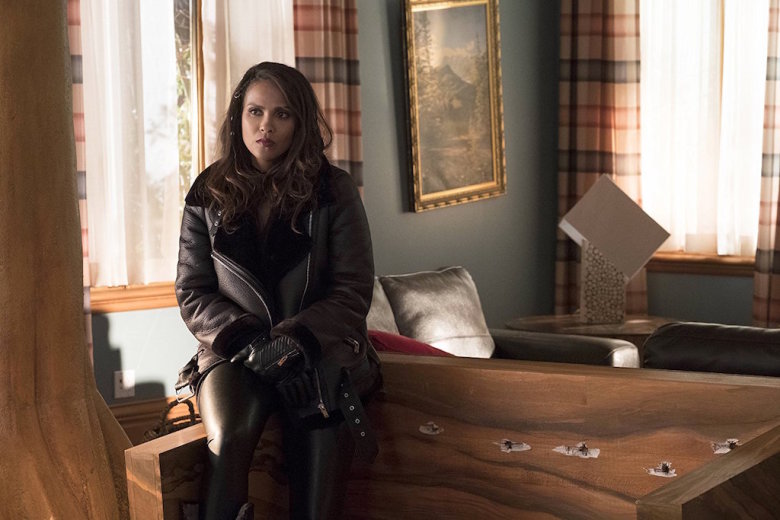 Chloe tracks Maze across Canada while she and Lucifer argue over matronly concern or fraternal support. Chloe thinks Rivers may be too dangerous for an inexperienced Maze, but Lucifer texts her information he has on Rivers’ hotel room. Rivers packs to disappear into the wilderness without Muffy when Maze breaks in and makes herself conformable. Rivers is intrigued by the clever bounty hunter, it’s adjacent to one of those two ships in the night situations. Maze clamps unescapable cuffs on Rivers and they have a clever little fight until they’re interrupted by room service.

Maze recognizes the assassin from the hotel lobby where she wore down Norm. Assassin Joan opens fire on Rivers and Maze who take cover behind the available furniture. Maze counter attacks Joan with an amazing knife throw, but Rivers is hit. Maze calls Dr. Martin for help, she isn’t willing to let her bounty slip away. Martin tells her she needs to extract the bullet and sew up the wound. Rivers doesn’t have any pills so Maze knocks him out while she does the cutting.

When Rivers wakes up, the bleeding has stopped but he has a headache and a red button sewn to his sutures. Here’ a valid question, does fear exist without the soul? Maze doesn’t hesitate to cut into Rivers, she’s either completely detached or wields incredible control over her emotions. Rivers claims Herrera framed him for killing a couple of teens because he refused to do it. He worked for a Herrera for a while, but eventually, he quit. Since then, Herrera’s been sending people to kill him. Maze doesn’t believe him, but she relays his story to Chloe. 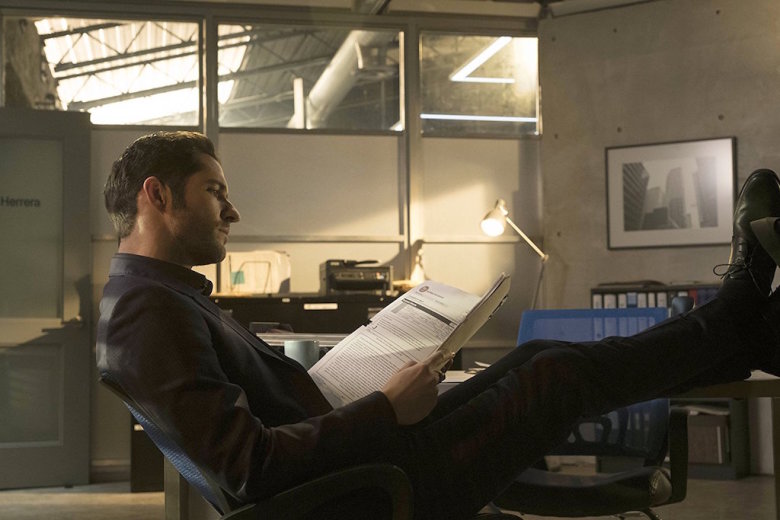 Chloe and Lucifer re-interview the security guard who identified Rivers of killing the teens. He quickly confesses to telling a tale Herrera wanted him to tell. Herrera is corrupt and Chloe already gave him the file she put together for Maze. She diverts Dan from his vacation to help Maze in Canada. Dan arrives and updates Maze about the security guard’s fake confession, but Rivers slips away again. Dan tries to convince Maze to let the Mounties take over the investigation but she also sneaks off to re-capture Rivers.

Maze finds Rivers as Joan and her hench trio are about to execute him in the snow. Rivers tries to talk Maze to safety, but she still isn’t ready to part with her bounty.  Plus, Maze considers taking on Joan plus three a recreational activity. Then, Dan Han Solo’s in and tackles one the puffy coat hench. Maze uses the distraction to grab another hench and use him as a bullet sponge. Team Maze wins. Dan hands Joan over to the Mounties, they get her to confess to Herrera’s repeated corruption. Maze lets Rivers go, his bounty is useless now that Herrera is arrested. Rivers invites Maze on the run with him. Rivers explains Herrera’s people are dangerous and will keep looking for them both. Maze isn’t afraid, but she does feel like she belongs with Lucifer and Chloe in their world. Soul or not, she belongs.

Lucifer should drop more contained episodes like this featuring its bench team. They can easily open up their story world and increase their fan base. Now, when do we learn Ella’s sinister secret?