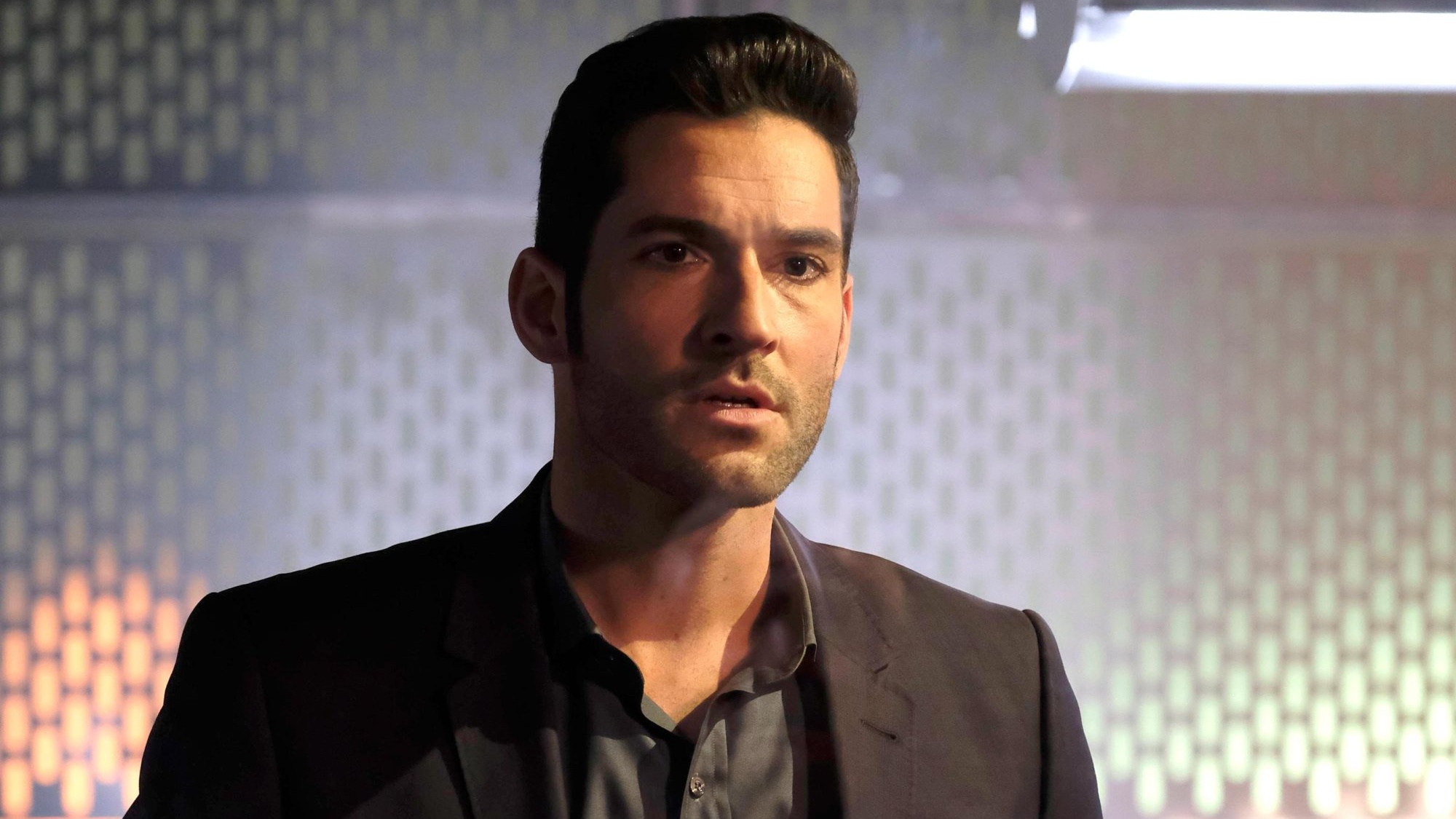 Lucifer delivers a polished but astonishingly weird episode in “Off the Record.” I can’t imagine how an episode like this happens. Since the episode plays with a time jump, I’ll attempt one too.

Remember in season three, episode seven when Lucifer aired that pointless, plotless, series kryptonite “Off the Record?” Now we know it was because of a writer’s walk out. And the issues over rights didn’t help either. Neither did the sudden loss of co-stars, firing of producers, black hole in financing… 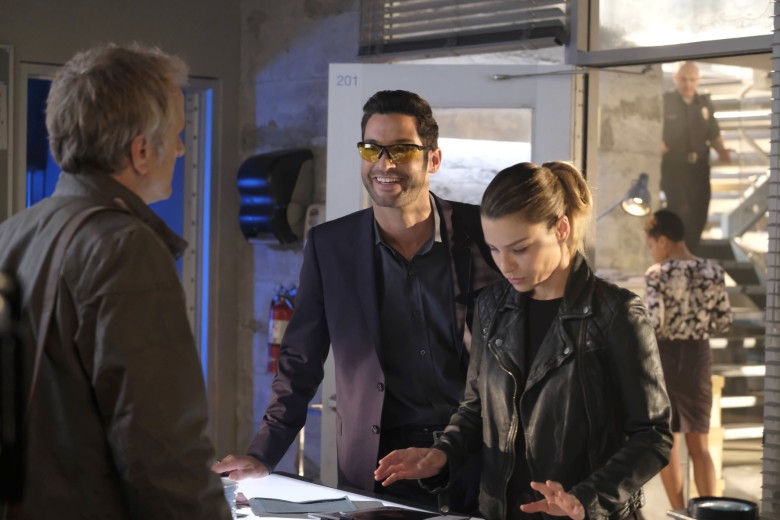 There has to be some secret behind-the-scenes tragedy no one is talking about. This season has moments of greatness, but there is absolutely nothing holding it together. “Off the Record” begins with Reese Getty, an award winning, celebrated, investigative reporter, wakes up after a brush with death in the hospital. He wants to know if his wife has been visiting but the nurse confirms he hasn’t had a single visitor. Still, he has a new lease on life and rushes over to his wife’s house with a bouquet of flowers. When he arrives, it’s clear she already has company. Reese hides in the bushes to see this scoundrel. Of course, it’s Lucifer.

Reese stalks Lucifer back to Lux where he gives him serious stink-eye for chatting up a line-up of ladies. The waitress tells Reese Lucifer’s name and Lucifer sits down with Reese to explain they have zero chance of sleeping together, Reese isn’t his type. Reese explains his wife is cheating on him with a scoundrel and Lucifer advocates destroying this A-hole. Then, Chloe arrives with a case. Reese does some snooping and convinces his editor there’s a story about LAPD employing a conman consultant. Reese’s revenge plan forms. So far, this has the making of a regular episode, so what went wrong? The victim of the week is a skin-care celebrity, Poppy Parker. Poppy was one of the million or so hypocrites living in LAPD’s jurisdiction and someone killed her for it. She was number four in the series of shame. 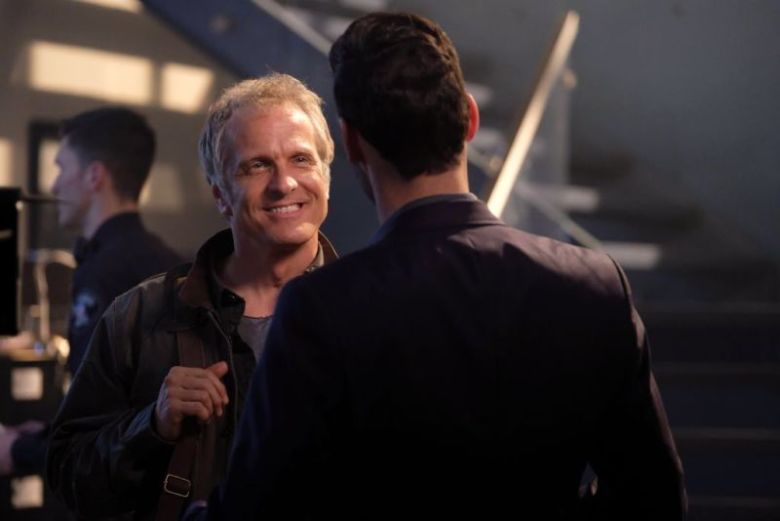 Reese calls his wife to warn her about Lucifer, she turns out to be Doc Martin. It also turns out all this stuff is going down last year. So far it isn’t a bad episode, but it’s mostly about this new passing character and takes place in a time we’ve already seen the main characters navigate. Reese vows to prove Lucifer is the devil after he sees him show his devil face in the interrogation room. He closes up his office and fills his walls with an investigation board linking everything we’ve already seen and come to learn about Lucifer, a wiki of sorts. Why do we need this? Maybe they plan an emergency re-boot? Similar things have happened on other shows during writer strikes. The thing is, as fun as the scene is, there’s absolutely no new information given.

Skip to, one year later, Chloe and Lucifer knock on Reese’s door looking for help with the old serial killer case. Maybe it wasn’t a half-filmed episode where they jammed in a few late re-shoots, but it sure feels that way. The whole rest of the episode, and we come to learn the entire episode, is about Reese’s obsession to reunite with Doc Martin. Lucifer has a great bench of talent and supporting characters, I wish they would do more supporting character-centric episodes like the season 3, episode 3, Maze chase thriller. Reese is not part of that bench. This is not a bang against the performance either. 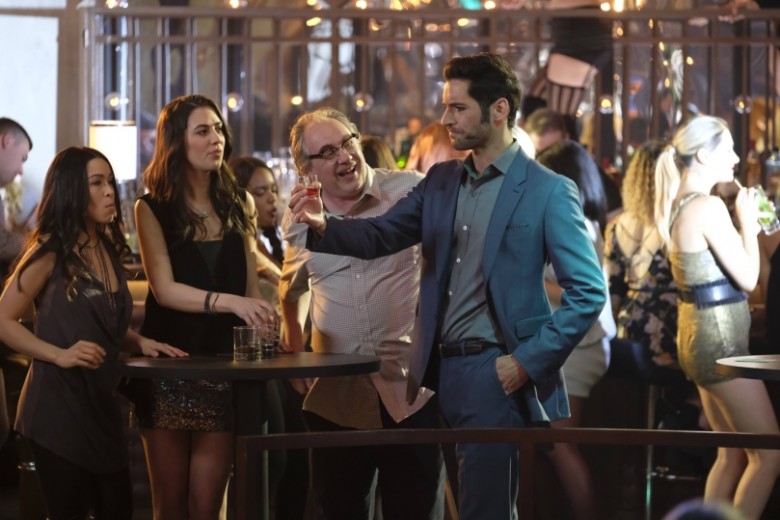 This is about Lucifer spending a whole episode to show us something we’ve already seen in the least interesting way about an unknown character while not forwarding any of the main or supporting character stories. Reese tries to shoot Lucifer in front of Martin. We know it won’t hurt him nor will Martin be shocked by his invulnerability. Reese deducts that Chloe makes Lucifer vulnerable. He tracks down the serial killer and sets Lucifer up to be ambushed by this guy, Alvin, at Lux. Chloe shows up, but the ambush goes sideways when some innocent woman drinks the poison meant for Lucifer.

Again, Reese returns to Martin’s office and pleads to rekindle their marriage. Why? Because this was the best idea they could come up with while Lucifer deals with some secretive yet devastating production catastrophe. She calls the cops and sends them to his office where he promises to hand over evidence about Alvin, the real serial killer. Reese arrives and drinks a tumbler of desk vodka which Alvin has already poisoned. Chloe and Lucifer arrive in time to tackle Alvin and arrest him. Reese wakes up again in his hospital bed, in hell, exactly like the other times they’ve shown other people suffering in hell, about to suffer through this episode again. The next episode is called, “Chloe Does Lucifer.” It has to be better, Lucifer needs to stitch a few episodes in a row together.