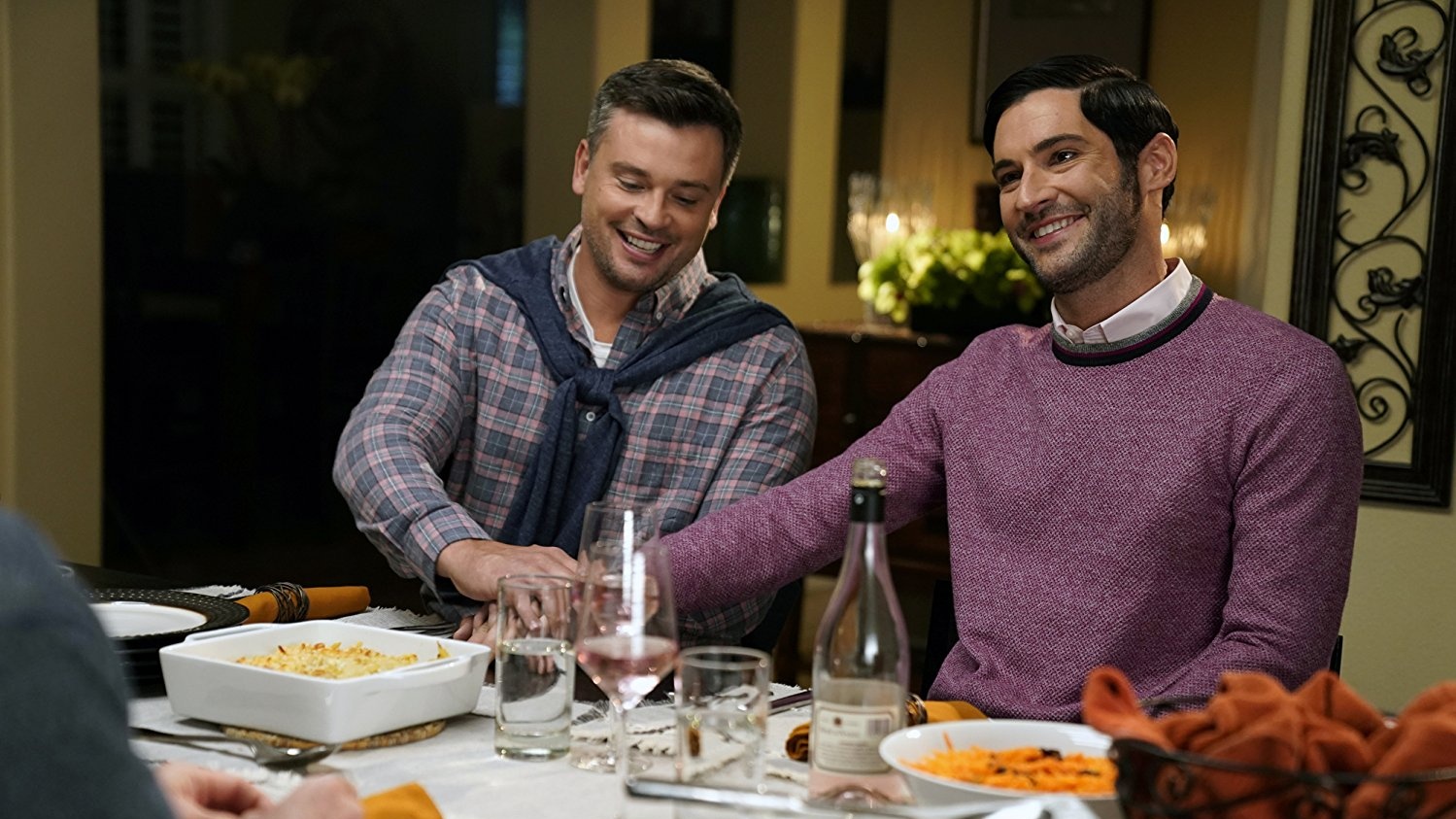 Lucifer heads in a new direction with the Pierce/Cain story in “Til Death Do Us Part.” Lucifer’s mom-story made a compelling arc for the entire second season and Cain’s is rolling out at least as good. No doubt, it’s strong storytelling, but it’s also a sign of Tom Ellis’ charm. His scenes with Tricia Helfer were riveting and his scenes with Tom Welling are magnetic. They seamlessly volley the comedy and drama back and forth. This week’s scenario was a perfect launch.

Lucifer promised Pierce he would find a way to kill him. Pierce has already tried every earthly manner to attack his body. Even if he cuts it in two or blasts it apart, one piece or side will grow back. Lucifer has access to divine weapons, powerful enough to kill Lucifer, but they don’t do the job either. Maze makes a useful observation, if Chloe can make Lucifer vulnerable, maybe there is something that makes Pierce vulnerable. Lucifer channels Doc Martin to mine Pierce for psychological clues, but Pierce doesn’t like answering questions about himself. If only someone in Los Angeles would kill someone else in LA and bring these two together?

Let there be murder. Chloe and Dan recognize the neighborhood, there was a time when they thought about moving there. Times change. The victim is June Lee, identified by the recent pedicure work on her feet. Her front half was destroyed in a wood chipper. All the neighbors say they loved her, it couldn’t have been one of them. Chloe discovers June Lee was not her real name, the victim was actually Sandra Jang, a woman recorded as dying three years previous. Pierce suggests people fake their own deaths when they’re running from someone or something. In Sandra’s case, she was associated with an organized crime unit called, Korean Power. 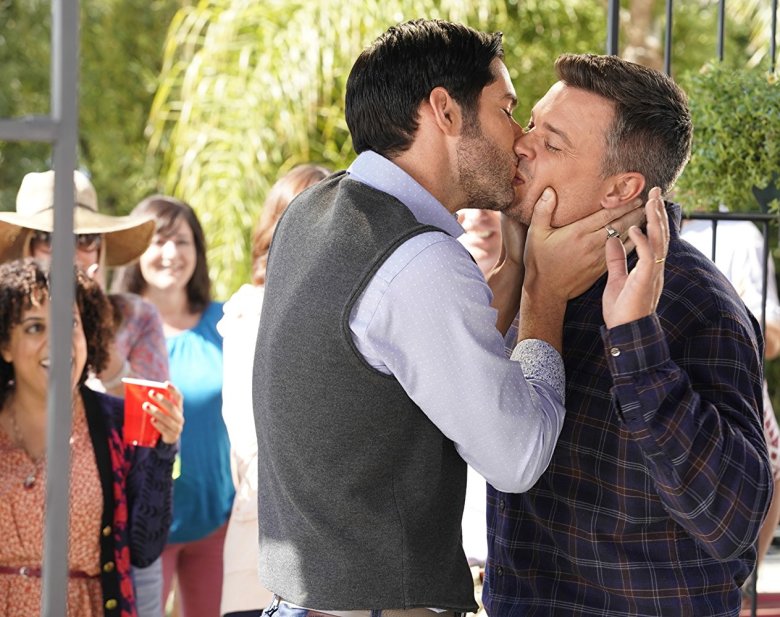 Lucifer knows that group well, they used to supply the best ecstasy blend in the city, K-Pop. They discover several recipes on Sandra’s laptop, she was their head cook until they had a falling out. Lucifer heads right over to Korean Power’s Karaoke and recreational drug lair. There is a hallway full of security hench and Lucifer has a dazzling fight cutting through them to the man in charge, Brandon Hong. Lucifer makes a deal with Hong, if he tells Chloe what he knows about Sandra’s life and work, he’ll deliver her famous recipe for K-Pop.

Chloe is surprised to see Hong walk in with a smile and tell her everything she wants to know about his relationship with Sandra and their drug business. Sandra stole a chunk of change from Korean Power and faked her death to get away clean. Hong was mad she took the money but he couldn’t forgive her for walking away with her recipes. He didn’t kill her, but she did call him recently. She said she could return the money she took, she was tired of looking over her shoulder. Hong can provide alibis for all his people.

Lucifer finds a threat letter hidden in Sandra’s hard drive. Chloe asks Pierce to send a couple into the neighborhood undercover, but it cannot be her or Dan. Pierce agrees and Lucifer is thrilled. Moving into the neighborhood undercover as a couple will give him quality time to learn more about Pierce. Neighbors Brian and Anya are quick to welcome the new couple, Mark and Luke. Luke (Lucifer) invites them over for dinner. Pierce may have been on the planet longer, but Lucifer is much more comfortable hanging out with people. 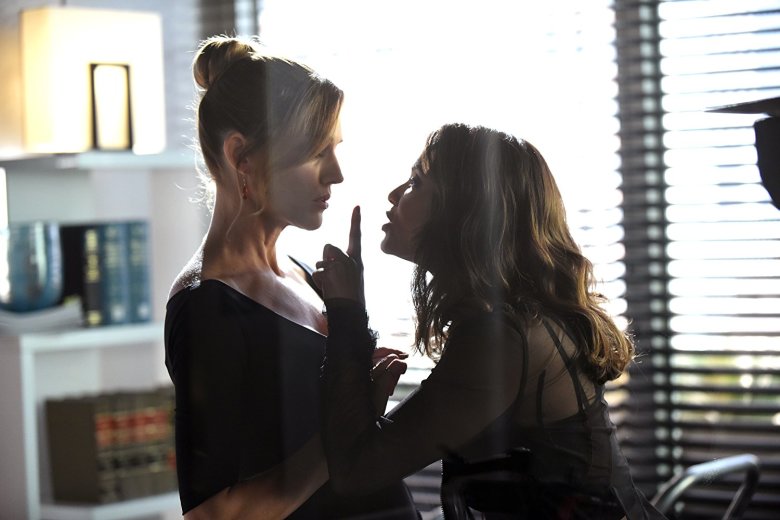 Luke doesn’t learn much about Mark, but Brian and Anya tell them about a mysterious neighborhood avenger that’s been leaving nasty notes in everyone’s mailbox. Chloe watches and listens form outside, the mysterious avenger is a prime suspect and Luke becomes Los Angeles’ most annoying neighbor to draw the avenger out. Loud music, water parties, annoying speedos, and he’s barely scratched the surface.

Speaking of scratch. Maze is looking for her next bounty and she isn’t thrilled with the county’s convict offerings. Charlotte enters the building while Maze is picking her next hunt and she instantly smells her walk by. Maze follows her nose to Charlotte’s office. Charlotte doesn’t remember Maze or the nature of their relationship. Maze can’t figure out why Charlotte smells so delicious now. It must be the changes Charlotte made after returning from hell. Later, Maze crashes a quiet dinner date between Charlotte and Dan. She suggests they all team up for a threesome. Dan is open to the suggestion but seems uncomfortable with the idea at the same time.

Charlotte tells Maze the difficulties she’s going through and her search for a normal life, something Maze has no interest in. Later, Charlotte apologizes to Dan for the weird date and also tells him about her current issues. Maybe not the best time to date. Dan encourages her to take her time, he assures her she’s worth the wait. They make him out to be the fool, but they also give him a lot of good lines. 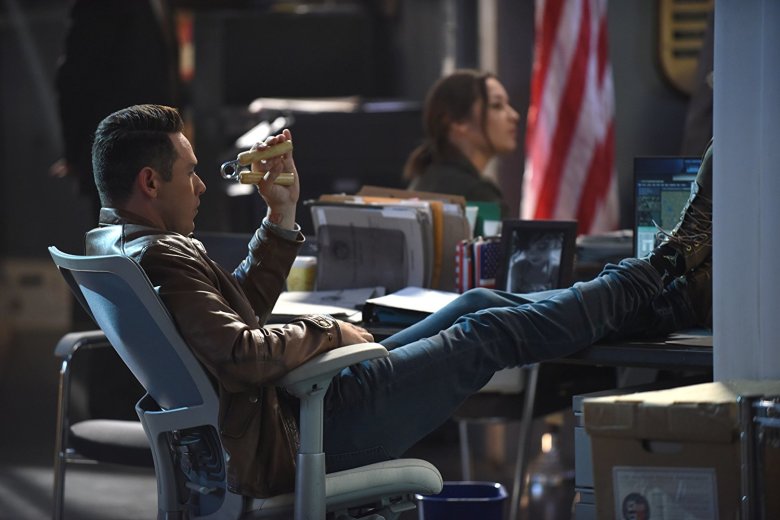 Chloe spots a man in a hoody sneak a letter into Mark and Luke’s mailbox while they argue in their garage. It’s neighbor Brian. She brings Brian in for questioning. The handwriting on his note doesn’t match the writing on Sandra’s. He admits he bought drugs from her all the time, they changed his life. He lost a keg of weight, made additions to his house, he never felt better. He didn’t kill her either.

Mark and Luke hold a block party with a sign-in book, hoping the killer will leave enough for them to make a writing match. The last person to sign is Anya. Brian tries to get her to leave the party before she does. He recognized her writing, she killed Sandra. Anya thought Brian and Sandra were having an affair. She confronted her and Sandra’s denials made her angry. She killed Sandra by accident but fed her into the chipper on purpose. Take that Korean Power with all your hench enforcers and assassins.

Lucifer isn’t any closer to finding a way to kill Pierce than before, but they are both committed and, in the meantime, they’ll find some other way to get revenge against his father.