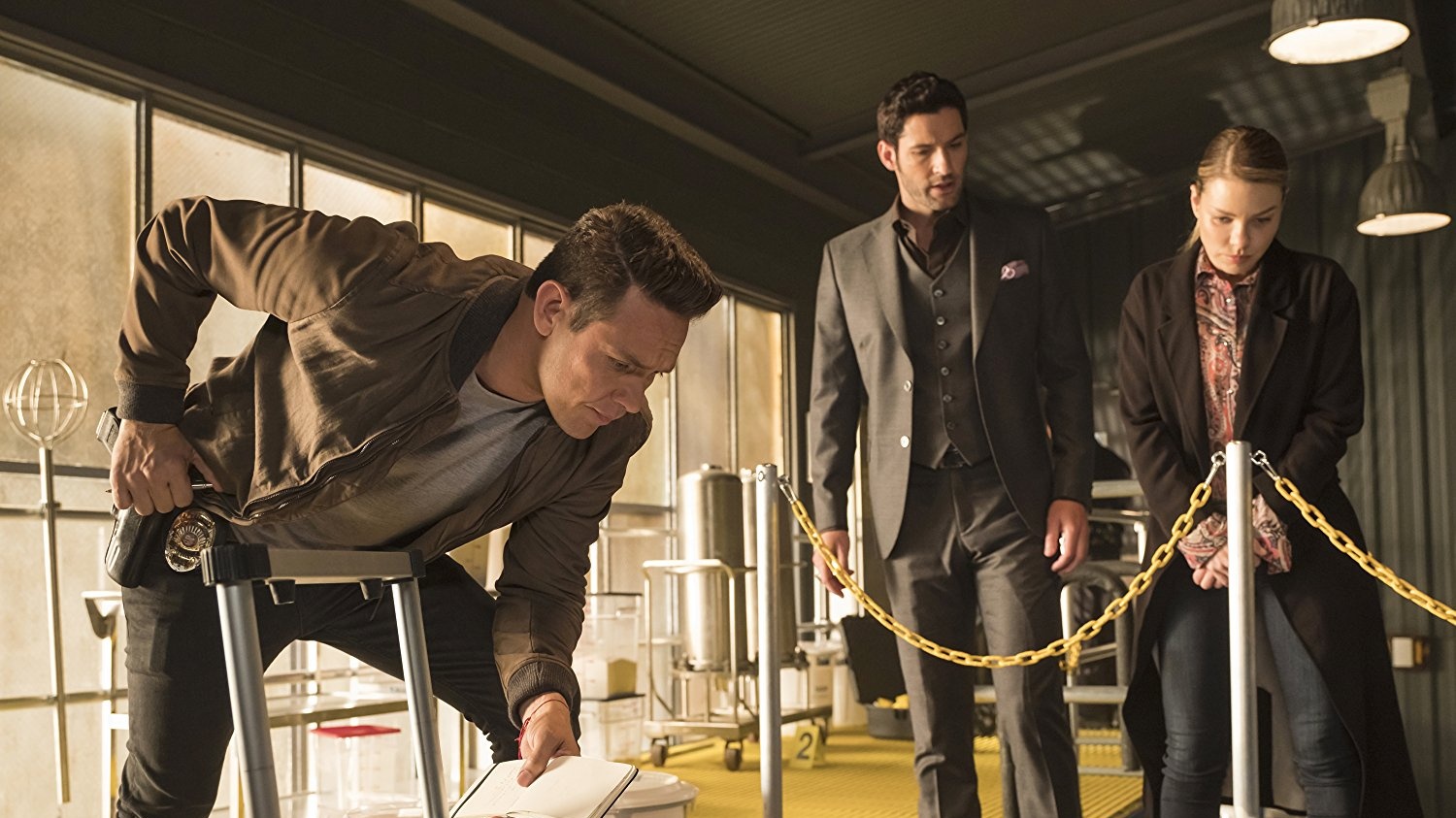 Lucifer and Dan suffer a special torment when our favorite defense attorney returns in “Welcome Back, Charlotte Richards.” We’re five episodes in to the third season and it feels more like a rebuilding year. There was a lot of talk about a new big baddie, The Sinnerman, but that story went cold shortly after the opener. Detective Pierce was only available by cheesy off-screen phone call this week. While it might make good business sense to leave Tom Welling out of an episode where he had little to do, it also makes me wonder if he was supposed to be in it at all.

Welling has been a great addition to the team, but they brought Charlotte back this week too. Tricia Helfer lights up the screen when she plays a character channeling and gauging spiritual layers. The trick about her return is she doesn’t remember the months she was possessed by Lucifer’s mother. Helfer plays the new Charlotte who remembers the old Charlotte in search of clues to her missing time. At first, Lucifer and Dan think it’s the Charlotte they both knew before. Lucifer is cautious of her next sinister trick and Dan is confused about her cold reactions to him. 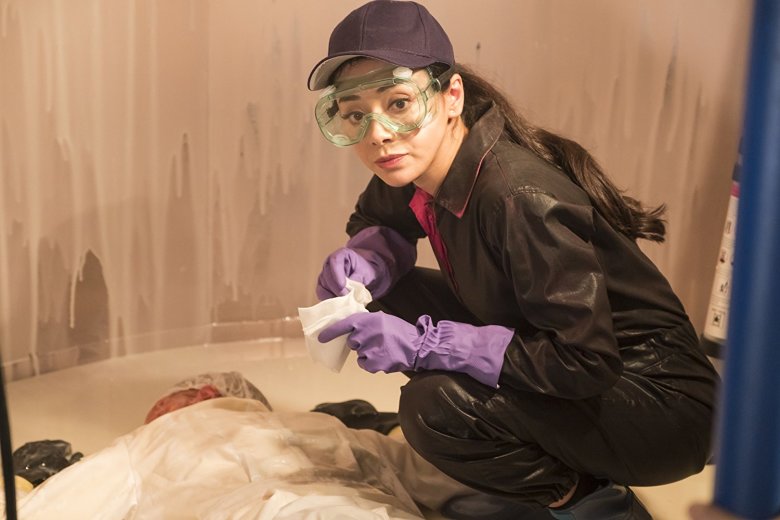 If there is any irony to this week’s victim, I missed it. Simon Fisher, the head cook for Detective Dan’s favorite pudding company, Performance Pudding Plus, is murdered while he checks the mix in one of their huge pudding vats. Ella determines he didn’t drown in the product, he was scalded to death. The factory has a decent array of security cameras and Chloe wants to see the footage.

Adrian Yates, the CEO of Performance Pudding Plus, agrees to bring the footage to LAPD but his attorney, Charlotte Richards, advises him not to release the security file. This is the first time anyone’s seen Charlotte since Lucifer sent her back to her divine waiting room. She looks and sounds like the Charlotte they knew, but she’s also a little off. Helfer is masterful with this kind of subtlety. After Lucifer, she walks right past Dan and leaves a thin coat of ice on his heart. Ella faces Charlotte at the elevator and lets her know Dan is under her protection now. This is another great scene because Charlotte is no longer hiding anything but we know Ella has some clever and diabolical secret. 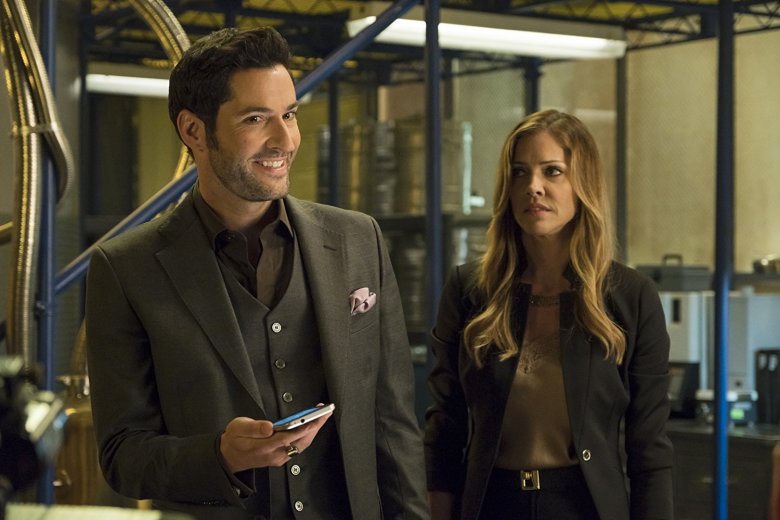 Chloe and Lucifer head to a movie studio to question Grace Foley, the CEO of Heavenly Pudding, the rival company. She’s in the middle of shooting a commercial with a platoon a beautiful bikini angels eating her product. Lucifer desire mines Foley and discovers she doesn’t want to shoot the commercial at all. She knows her pudding isn’t as good as the stuff Simon Fisher made. Over the years, she tried to poach Simon from Adrian several times, but he stayed loyal to Performance Pudding Plus. At the studio, Chloe spots a tail and confronts him. He won’t admit to anything accept being Adrian’s fixer, until he talks to his lawyer, Charlotte Richards, but she isn’t answering her phone.

Charlotte is hiding out at Lux, when Lucifer walks in, she fires up her lips. Lucifer defends himself but Charlotte sneaks in a couple of kisses. At this point, he still believes this is his mother. Then, Charlotte explains losing her memory, and for a reason she doesn’t know, also lost full custody of her kids. She also confides that in place of a few months of memory, she suffered a recurring nightmare, it felt like hell. Lucifer confirms her hell idea isn’t as crazy as she thinks, but he also comforts her by reminding her she’s been given a second chance.

Ella’s autopsy shows Simon would have been dead in a few days if he wasn’t murdered. The Fixer explains Simon had nothing to sell or trade, the two pudding companies agreed to a merger months ago. He was retained to follow up any leads that may wreck the deal. Adrian, Foley, and Simon all stood to gain by the deal, the only person who didn’t was the security guard, Lalo. 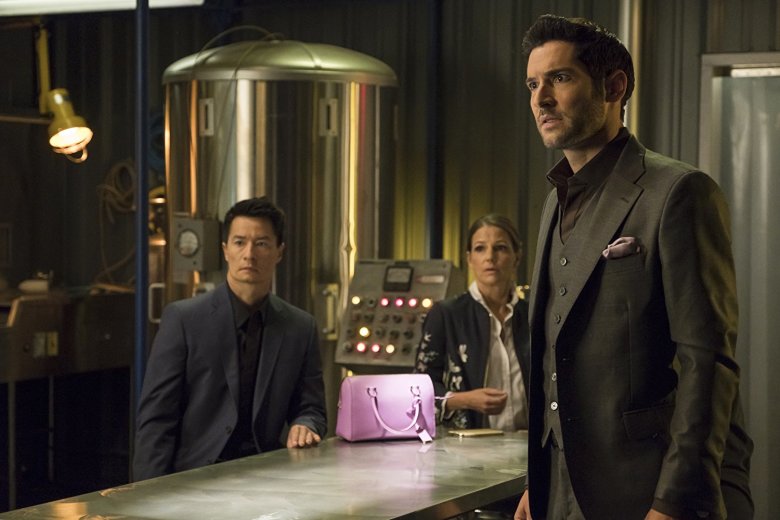 Lalo had been out drinking with Simon weeks before the murder. Simon got drunk and explained he was dying and thinking about killing himself. Charlotte turns over the security footage as part of her new do-no-harm philosophy. The camera doesn’t catch a second person struggling with Simon, but it does reveal an important clue. Two of Performance Pudding Plus’s ingredients are toxic when stewed together. Simon through himself in the vat, made it look like a murder so the cops would investigate the company and uncover the truth before they sold it to millions of loyal customers, like Dan.

Charlotte calls her three clients to suss out the killer at gunpoint. She doesn’t want the blood of guilty clients on her hands anymore, the problem is, no one at the table murdered Simon. Lucifer arrives in time to stop Charlotte from shooting Adrian, Foley, or the Fixer and secretly records their pact to keep the poison recipe from the public, at least until after their deal goes through. They had no intention of taking responsibility for Simon’s adrenal failure or anyone else they may have killed over the years.

Improved Charlotte takes Lucifer’s advice and before she exits the scene, she apologizes to Dan and invites him to coffee sometime. Chloe buttons the episode with an on-the-nose lesson for Trixie in taking responsibility for your words and trying not to hurt people. Loopholes are everywhere, responsible people don’t exploit them.