You guys, this is it. This is the one. “Just to Get a Rep” is everything I wanted LUKE CAGE to be and more. The plot picks up, the characters have motivation, the stylistics are amazing, the tie-ins are all humming. This episode couldn’t be better and that bodes well for the rest of the show. 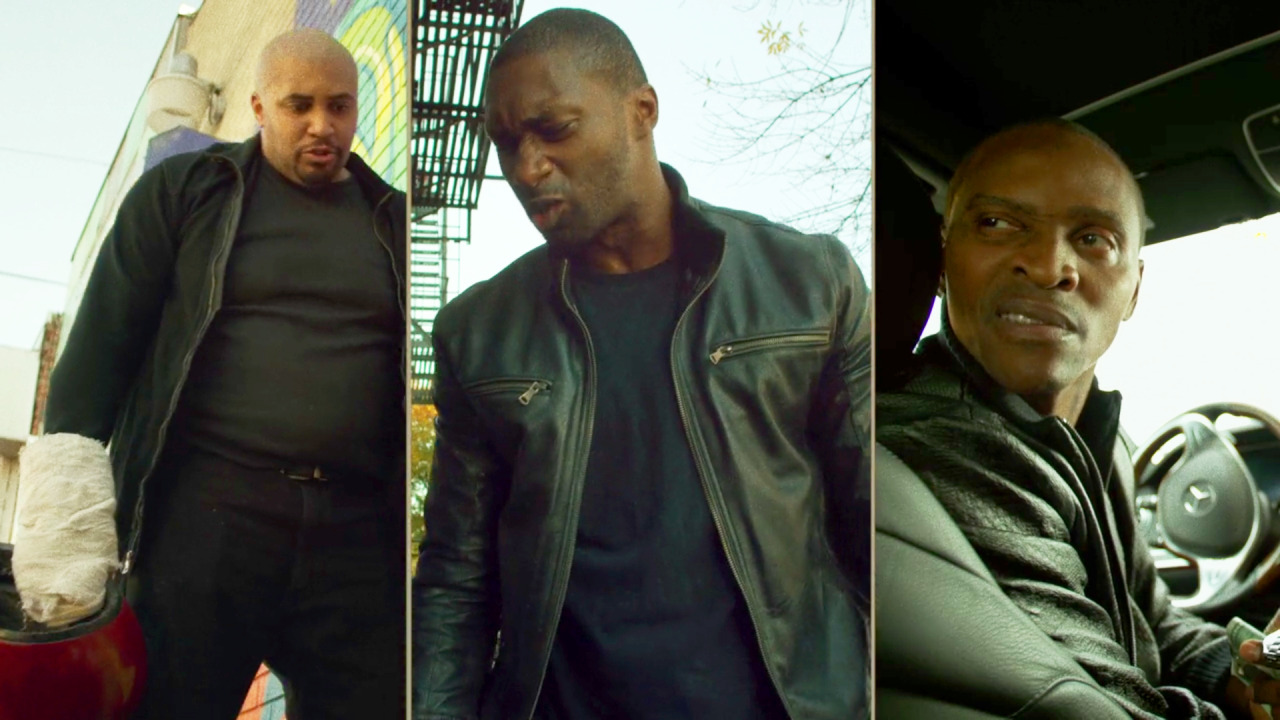 I’ll start with all the accoutrements that had me squealing in glee. First, the style finally is something. I’m sure it’s been here all along, but the driving, funky theme during all of the montages and Luke’s fight scenes stands out in this episode in particular. The split screen montages and scrolling fade-ins are that perfect level of ’70s cheese that the show has been missing. The entire sequence of Cottonmouth’s goons fleecing people for their valuables and Luke tracking them down is dynamic while at the same time it provides solid motivation for all the characters involved. Cottonmouth is angry that Luke divested him of his dirty money. Luke is defending the honor of his name after Cottonmouth enforces the “Luke Cage stupidity tax.” The whole sequence is shot and edited so well that it consistently carries a hectic energy for like twenty minutes without flagging. It’s superb, exciting, and just corny enough that it’s a good homage without being overdone. 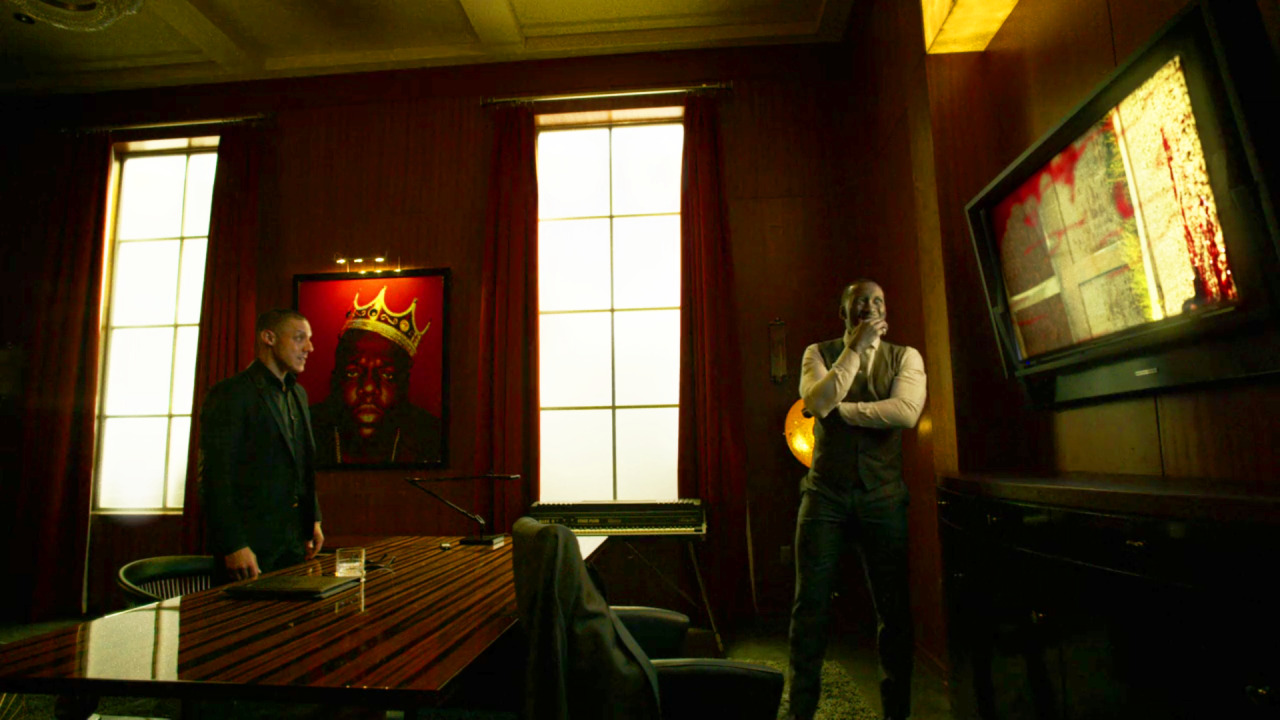 Even with all that style, the first thing that hooked me in this episode was that I finally believed Cottonmouth had a reason to behave the way he was behaving rather than just feeling like he was playing at being a crime boss. His flunky giving articulate suggestions on how to deal with Luke based on a sociology book about hip-hop was a moment of both humor and brilliant intellect. Who on earth confronts their crime-boss boss with the social theory behind their idea? I loved it because it’s completely incongruous to the situation but it injects a fairly complex idea into your consciousness with humor. One eloquent speech contextualizes the situation more than the first four episodes of the show did. And then Cottonmouth shoots him for his brazenness which elucidates his character more than anything to that point. There are moments of earnestness mixed throughout this episode as well and they balance well with the action and levity. Luke ends up pleading the case for honorable black masculinity at least three times over the course of the episode and yet it never feels pedantic. His run around Harlem to catch all the bad guys doubles as a brief cultural tour of the city, punctuated by Luke insisting that everyone respect the history they’ve been entrusted with. It’s so good. To top it off, the climactic moment of conflict had nothing to do with guns or beating people up. It wasn’t even a face-to-face conflict. Luke and Cottonmouth both speak at Pop’s funeral essentially presenting their ideological views of Harlem directly to the people and letting them choose which perspective they prefer. Cottonmouth is focused on maintaining his own power by casting himself as a protector and a champion of the idea of Harlem. Luke, on the other hand, speaks not about Harlem as an abstract but as a community created by the people within it. Both are championing black pride and perseverance but in very different ways. Luke favors allowing everyone their agency while Cottonmouth simply wants to maintain the status quo of corruption. Cottonmouth’s ideals sound powerful, until juxtaposed with Luke’s. It’s so well-written you find yourself cheering in agreement along with the mourners at Pop’s funeral while Luke is speaking. Luke and Cottonmouth also directly confront each other without even mentioning each other’s names which is the definition of throwing shade. The entire thing is brilliant and far more climactic than any action scene could be—especially after action was such a huge part of the episode earlier. Luke’s powers are tricky to write for without getting annoying or redundant and I love making the true conflict ideological rather than physical. Nothing much is going to take Luke down, but ideas can be far more powerful than fists. But all the tie-ins, guys. Lord help me. They all fit so seamlessly into the narrative it just feels like someone pulled the stitches tighter on the whole Marvel Cinematic Universe. Claire Temple not only makes an appearance but is a significant part of the episode, staying with her mother in Harlem to clear her head after all the ninja crazy from Daredevil. Claire gets better every single time she shows up. I felt like she was a weak character in the first season of Daredevil but at this point she’s one of my favorite things about the Netflix shows. Telling her mom about all the superpowered people she’s encountered is one of those things that probably doesn’t make sense if you watch Luke Cage in a vacuum but it’s not designed to watch that way. None of this is designed to work that way. You either cram 200 hours-worth of story in your head and obsess for all-time or you just lightly enjoy things and don’t fret too much about the tie-ins. Myself being an obsessive, Claire in this episode makes it truly feel like I’m catching a glimpse of an alternate, consistent, complete universe that exists wholly independent of whether I’m watching or not. That is my favorite thing. My favorite thing. I have a feeling I’ll get to Claire herself very shortly in a future review, so I’ll leave her be for now. Even beyond Claire, the weaponry that Shades demos for Cottonmouth is an exploding bullet developed from a Hammer prototype using Chitauri metal from the Incident in The Avengers. The thing that could hurt Luke Cage is so thoroughly grounded in what the MCU has had lying around for six years that there were legitimately tears in my eyes it made me so happy. That’s some beautiful, A+, well-kept world-building right there—another of my favorite things. I always say about Agents of SHIELD that they do best when they use what they already have. The thought didn’t even cross my mind for Luke Cage and co. to do the same thing, but the results are stunning.

I’m so happy. If the rest of the series is like this then the slow start is irrelevant. Luke Cage has found its footing and hit its stride. I am on board for this entire ride.