I am so easy. There are just certain things that, if a story gives them to me, I will eat up like a bear slurps honey. I’m discovering that traumatic childhood backstories—especially for villains—are one of those things. But not nonsense ones; I mean ones where they really show how awful someone’s life was. That’s what LUKE CAGE just did for Mariah and Cottonmouth in “Manifest” and I hadn’t realized I’d been waiting for it the entire time. Cottonmouth had always struck me as a weak villain with very little motivation for his criminal activity. The second they showed me that he’s, at heart, a gentle artist who was forced to be tough by his grandmother it flipped the switch for me. He suddenly made sense 100%, and that’s perfect storytelling. It was also so subtly done. They never told me about his and Mariah’s traumatic past; they showed it with bloody hands and faraway gazes. They talked about Mama Mabel so much in the previous episodes I was glad to finally meet her and her appearance didn’t disappoint. I also loved the vastly different viewpoints of Mariah and Cottonmouth on what their childhood had been like. Cottonmouth felt betrayed because he believed his Uncle Pete was the only person who ever supported him, while Mariah felt ill used because she had always had to take care of Cottonmouth and was abused by Uncle Pete. The whole dynamic is perfectly done and presented carefully and respectfully. Rather than making them both out to be irredeemably evil and weak, they’re granted pathos. On top of that, Mariah beating Cottonmouth to death had me legitimately screaming “I KNEW I LOVED YOU. I KNEW IT” at like 3AM. All of that self-control finally snapped. It’s also phenomenal because the show sets up Cottonmouth as the main antagonist and then it’s a domestic squabble that takes him out like halfway through the season. It’s unexpected and deeply satisfying because of it. It’s also a fantastic warning to all the people who like to tell folks that their abuse is their own fault. Do that and you will get destroyed with a mic stand. Bless Mariah. 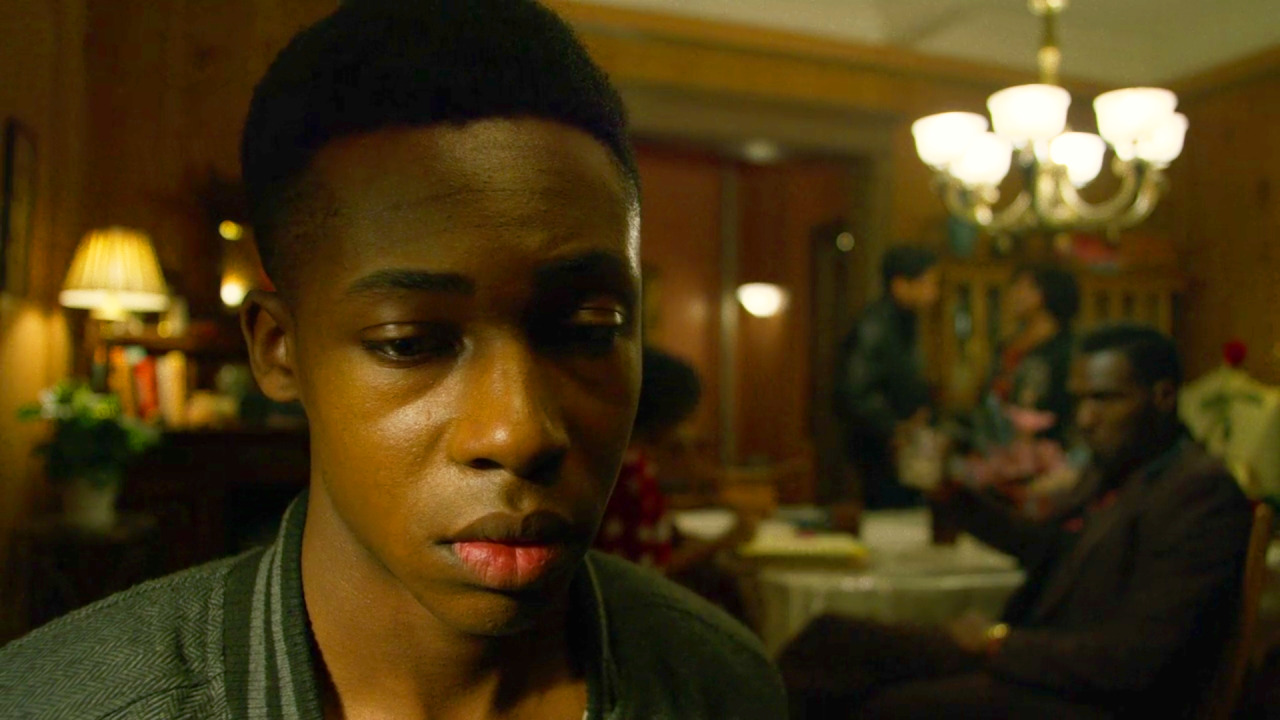 It’s shot so well you can feel how trapped he is.

Mariah and Cottonmouth’s sympathetic backstory is definitely the focus of this episode but it’s far from the only thing going on. Misty, Luke, and Claire all have plenty of relevant business. Misty’s boss is fired and her new boss has her under a microscope, grilling her about not going after Luke Cage. Cottonmouth is blackmailing Luke with Luke’s criminal past so he wants to run away but Claire talks him out of it. Luke gets the missing contraband guns back and hands them over to Misty. Mariah is forced to resign from the position as councilwoman and goes a little crazy over it. I can’t decide if my favorite part of this episode is Misty, Mariah, or Claire. Claire is so good now at talking superpowered people into using their powers for good. She’s like the sensible conscience of powered New York. I especially love just how much she’s in this series. They’ve finally given her space for character development and she’s a joy to get to know. Misty also seems pretty close to cracking, what with losing her partner, Cottonmouth getting released, and her being under so much pressure from above. I loved her confrontation with Cottonmouth. Please continue insulting each other with etymology and pride. That scene so early in the episode was so well-written and anytime something that masterful crops up right at the beginning I’m always on board for whatever story they’re going to tell. I also love that Misty’s new boss is another black woman. Positions of authority in this show are pretty much universally held by black women who are excellent at their jobs and that’s a delight to see. It’s especially nice because the first few episodes looked like they were holding up a kind of toxic masculinity that got at least one person killed per episode. The shift in narrative authority is subtle but definite. It pleases me.

I also liked Luke’s plot. He has a personal crisis where he wants to run from his past but ends up standing up for what’s right instead. He tracks down Cottonmouth’s gun buyer Domingo, walks in amidst machine gun fire, and persuades Domingo to give up the contraband guns. It’s another one of those “action” scenes that doesn’t even have that much violence in it because Luke is invulnerable. It also underscores how shocking it is that a bullet actually hurts him at the end of the episode. Shock and awe! Luke’s been shot! Fade out!

Here’s a character I never thought I’d love so suddenly: Shades. To this point, he’s just sort of menaced around in the background like a messed up Joe Cool and I ignored him. Sure, he kept dropping the name of his boss but he just seemed like a useless lackey. Shades showing up at Mariah’s house and challenging her to claim the power due her had me sit up and pay attention. When he was there after Mariah killed Cottonmouth and basically contextualized the entire thing like the moment she made herself into the queen I was so into it. I should not be this into it. Shades isn’t just suddenly a power player, he can tell where the real authority is and turn it into something great. The one weird bit here was the random man with the rifle showing up at the end and shooting Luke with the special bullets. Who are you, grudge-man? In a normal network show I’d call foul so fast on something like that, but let’s be real: I’m just going to hit play on the next one immediately. I trust they’ll fill me in pretty fast.

This is the third episode of Luke Cage in a row where I’m completely on-board. It took a while to get going, but I’m fairly confident this show will keep chugging along with its current greatness.