What’s that? Did you hear that? That preternaturally high shriek of delight? That was me. LUKE CAGE’S sixth episode, “Suckas Need Bodyguards,” is vastly different from the last episode but just as good for a lot of the same reasons. Starting the episode off with a little bit of Trish Talk (the talk show from Jessica Jones) was absolutely cheating because it sucked me in immediately. But it was a good cheat. It provided context to Luke’s situation and firmly established him as a named, superpowered individual out in the open. That’s important. The only other heroes in this whole universe out in the open are the Avengers. It also furthered the conceit that all of this takes place in the same world without even having to show someone’s face. Anything that can catapult me into the story that fast gets an A+ in my book. I finally get space to talk about the cop side of this story which until now has been kind of a background flavor. Misty and Scarfe were sniffing around Cottonmouth’s operation before this, but his operation wasn’t really that menacing and the shootings that stemmed from it didn’t seem like they were pressing issues for the police. I loved Misty because she was dedicated and interesting. I liked Scarfe because he was disaffected but not disinterested. “Suckas Need Bodyguards” lets this unconventionally police narrative play out to its fullest. Scarfe is corrupt but he’s not a slimeball like corrupt cops are so often portrayed. He doesn’t use the extra money for anything and he tries to blackmail Cottonmouth in turn. The entire blackmail scene upsets your expectations three or four times, setting up an episode so fresh to me that I was excited with every direction it went. You don’t expect Cottonmouth to punch Scarfe in the face, or for him to shoot him, or for Scarfe to survive it. I hate about 95% of the cop stories I watch because they’re always so predictable. This episode made me smile constantly because it eschewed every single awful police trope that shows usually go for. It even let Misty detail her affection and loyalty to Scarfe, express her emotions at the death of her partner, and hold his hand as he died. It was truly touching and choked me up a bit just because everyone involved let that moment play so real. This episode also functions well as a piece of Luke Cage, not just an unconventional cop plot, because it gives everybody something relevant to do. Misty is looking for her partner, Cottonmouth and Mariah are fighting over how to get rid of Luke Cage, and Scarfe goes directly to Luke for help and flips on Cottonmouth at the drop of a hat. I can’t even pick apart how they’ve made Scarfe so likable when he’s the kind of character that’s usually portrayed as despicable. He out-and-out killed Chico, for goodness’ sake! And yet I still genuinely like him. The business of keeping Scarfe alive and getting him to the police is a fantastic and consistently exciting way to structure this episode. It has stakes for everyone involved and you feel it. Clair wants to keep Scarfe alive, Scarfe wants to stay alive, and Luke would get to take down the gangster terrorizing Harlem. It’s just good. It’ also fairly inevitable that Claire shows up and someone starts bleeding out. Another thing I loved? Luke tried to hit on her and she shut him down immediately. Yes, Claire! Long ago when I still read press stuff and interviews, Rosario Dawson said that Claire isn’t just a love interest in the first season of Daredevil. Which is a patent falsehood; all she is in that season is a love interest with convenient medical training. The more she crops up in these stories the more they let her be more than a love interest. I adore that. She seriously gets better every time she shows up. Where all the superpowered folks can get bogged down in their particular moral qualms and troubles, Claire is more and more the person who slaps them upside the head and tells them to get over it and use their powers for good. I love her. 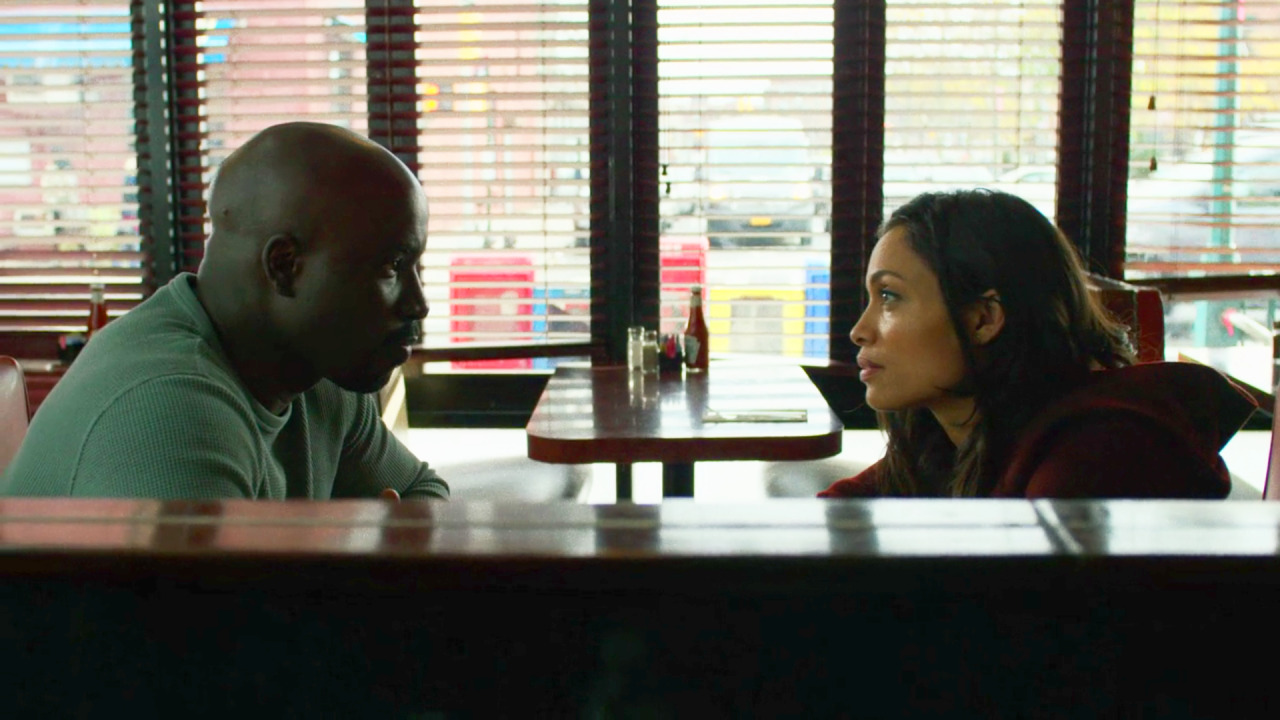 Over the course of this episode and the last one, Cottonmouth developed his own brand of crazy rather than just being a knockoff Fisk. That matters because this show needs its own identity narratively in addition to its unique style. Otherwise it’s just a repeat of what we’ve already seen in a different wrapper. Cottonmouth still doesn’t feel like a strong threatening force, but that he’s zeroed in on Luke as a target makes his actions far more compelling. The true star for me here though is Mariah. I had so much fun watching Mariah’s devious practicality while she listed ways other than bullets that Cottonmouth could try to kill Luke. Combine that with her subtle issues fighting her grandmother in her own head and the confrontational interview that she has with the TV reporter and the balance Mariah has between her shiny public life and the crime undercurrent is straining to the breaking point. I love her so much; I feel like she’s one of the most compelling parts of this show and I can’t wait for her to hit that breaking point and let loose. She’s fascinating to me because Cottonmouth is the one who is trying so hard to be a gangster but he really sucks at it. Mariah is constantly saying she doesn’t want anything to do with his criminal activity but she’s also the one who is telling him how to be a more effective criminal. She’s a delight, and I love watching her try to force the world into the shape that she wants. 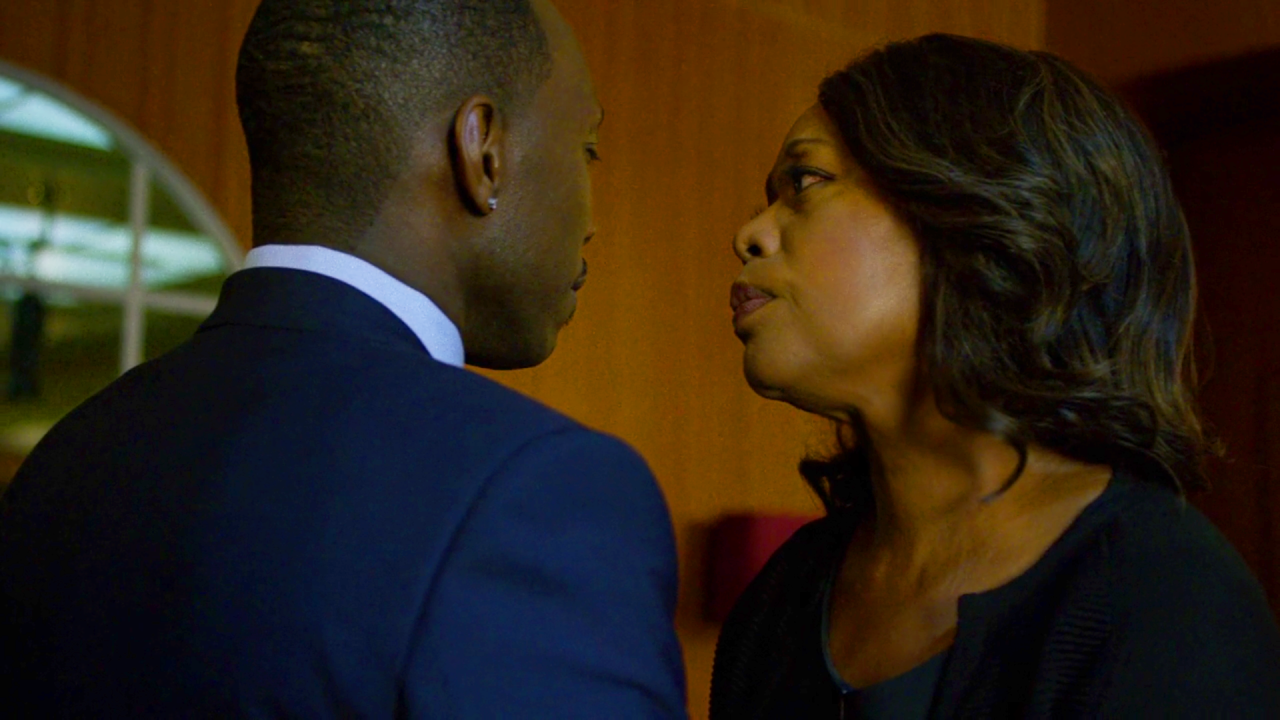 This whole thing is just so well done. Every single character has a reason to be here and something to do. Cottonmouth and Luke are in (in)direct confrontation, Claire has to keep Scarfe alive, Misty is trying to find him. No one is at rest here and every plot affects the others. I’m honestly having a hard time expressing why this was so great just because it completely upended narrative expectations for a story like this. I loved it, I was into it from start to finish, and all of the characters had stakes and motivation. It was superbly done. Keep it up, Luke Cage.