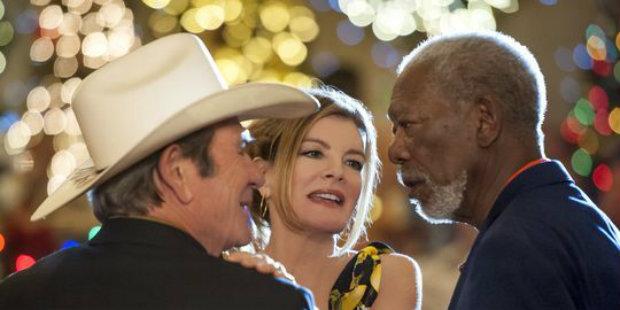 In the comedy directed by Ron Shelton (Tin Cup, White Men Can’t Jump), Freeman plays Duke Diver, manager of a luxury Palm Springs resort called the Villa Capri, who tries to hide his past while turning the place into a non-stop party. When Jones’ Leo checks into the Villa Capri, it becomes a non-stop competition to become the resort’s alpha male while trying to win the affections of another newcomer named Suzie (played by Russo).

It’s the latest in a line of Morgan Freeman comedies that either pairs or pits him against other veteran actors, following Going in Style earlier this year and Last Vegas a few years ago. In some ways, 2007’s The Bucket List with Jack Nicholson started Freeman’s run of comedies in this vein, although they’ve gotten less successful the more Freeman does this sort of thing.

Just Getting Started will hit theaters on Dec. 8.