At times, MR. ROBOT leaves you scratching your head, wondering if what you’re seeing is real or all just a figment of Elliot’s imagination. It’s this thin line between fact and fiction which makes watching the show so rewarding. Elliot has blackouts, a split personality where Mr. Robot can take over his mind, a drug problem, and intense hallucinations of both people and events. He’s a classic unreliable narrator, so nearly every scene with him in it needs to be scrutinized.   What is real? What is an illusion? If Mr. Robot is a figment of his imagination, what other characters are as well? It’s a tough thing to parse out at times. 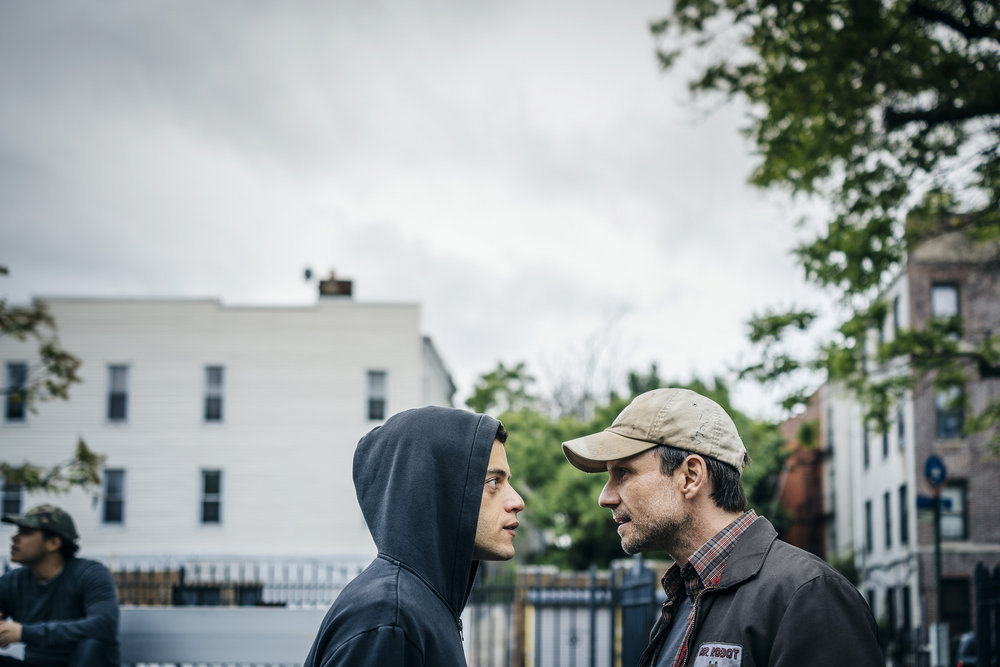 This entire season has been about Elliot gaining control of his life, and in order to do it, he has to get rid of Mr. Robot. He thought a regimented routine would do the trick, but Mr. Robot won’t go quietly into that good night. We know as viewers that Mr. Robot is too ingrained in Elliot’s subconscious to be gotten rid of so easily. I mean, Elliot is Mr. Robot and Mr. Robot is Elliot. Can you even separate the two? It seems it’s been this way for a very long time; Probably ever since his father died. The guilt Elliot carries with him about his father’s death has become something he can’t seem to shake, which is why Mr. Robot looks like his father.

Episode two left on a cliffhanger where Elliot snapped out of a black out holding a telephone with Tyrell on the other line, and tonight we see what happens in the aftermath. Elliot wants to know where Tyrell is, but Tyrell doesn’t tell him. Before Elliot can find out any more, Mr. Robot hangs up the phone. Mr. Robot has partially given Elliot what he wanted, but not enough to satisfy him. Has Mr. Robot proven to Elliot that Tyrell isn’t dead? No, in fact since we can never tell truth from hallucination, this could all just be in Elliot’s head as well. In fact, I have a strong feeling Tyrell may be a hallucination of Elliot’s much like Mr. Robot is. Perhaps that’s a bit of a stretch, but it hasn’t been ruled out yet. Either way, this phone call and Mr. Robot’s reaction to it is what gives Elliot the initiative to try to rid himself of Mr. Robot once and for all. 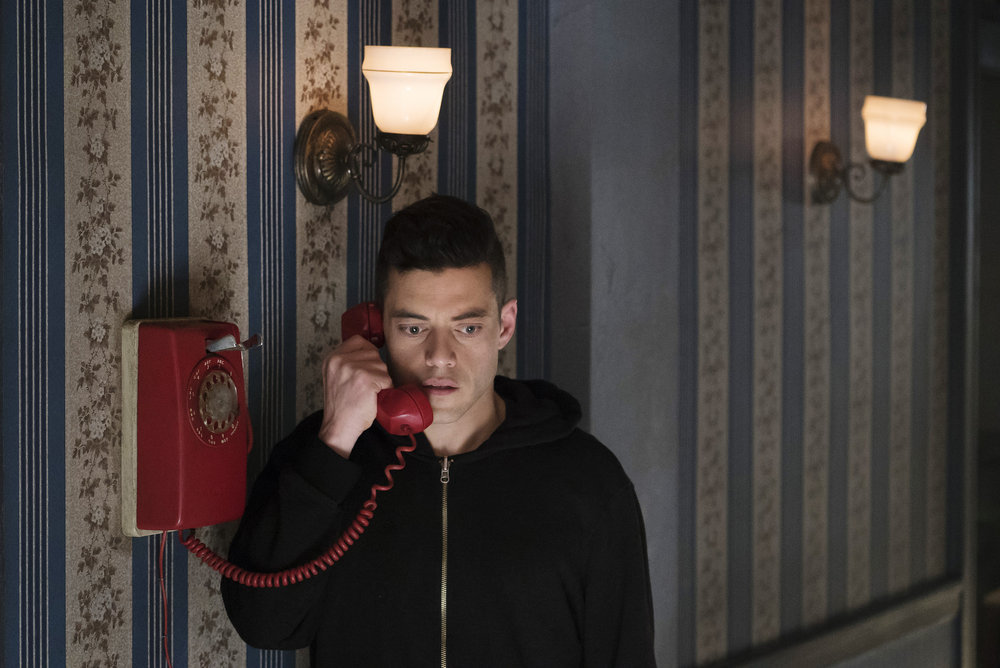 Elliot’s plan is to stay awake constantly in the hopes Mr. Robot goes away. If he doesn’t fall asleep, there’s no chance for Mr. Robot to take him over and do things Elliot can’t remember. He buys adderall from Leon, and it makes Mr. Robot mad. Elliot takes a lot of it in front of Mr. Robot out of spite, and soon finds himself abducted by mysterious men in an SUV who take him to a parking garage, tie him to a chair, mix some concrete in front of him, and use a funnel to pour it down Elliot’s mouth. Who are these people? Why are they doing this?

Hold on, wait. This is all in Elliot’s head. Mr. Robot is making Elliot think this is real. Instead, Elliot is in his room throwing up the hallucinated concrete. It was just a way for Mr. Robot to force the adderall out of Elliot. Only once Elliot realizes what happened, he digs through his vomit, grabs the regurgitated pills, and reingests them. Elliot’s plan works for a while. He stays up for six days straight, and no Mr. Robot. The problem is this won’t last. He can’t stay awake forever, and he knows the minute he falls asleep Mr. Robot will reappear. The drugs have everything literally fuzzy around the edges, and though Elliot tries to convince us and himself that he has things under control, he does not.

Angela has a weird relationship with Price. It’s hard to tell if he’s trying to seduce her, or groom her to take his place in E-Corp some day. She’s as confused as anyone, and underneath the icy, controlled surface she maintains, there’s a lot of vulnerability and fear. When Price asks her out to dinner it seems like it’s a date, but when she arrives two colleagues from E-Corp are waiting there with Price. After an awkward dinner he drops a huge shit bomb on Angela. Both of the men were in the room the day E-Corp decided to cover up the toxic leak that eventually killed her mother. After setting her up to see the banality of these men’s evil, he offers her enough information to put them in jail for a long, long time. What is he doing, and why is he doing this? What’s his endgame? Angela doesn’t trust him, and why should she? He’s just royally screwed with her mind. In an interesting bit of character revelation we find out that both Ray and Dominique have very similar qualities to Elliot. We learn Ray speaks to his wife every morning at breakfast, but she’s been dead for over five years. He tells this to Elliot, to let him know it’s ok he speaks to Mr. Robot, but Ray is also trying to get Elliot to work for him, so it’s hard to see what’s manipulation and what’s just similar character traits. Either way, Ray opens the door back up for Mr. Robot in Elliot’s life. Dominique on the other hand has insomnia, which clearly Elliot has as well, only for him Mr. Robot takes over and he blacks out. For her, she tries everything to fall asleep. She watches TV shows in bed, unplugs her clocks so she can’t see what time it is, and tries to masturbate in a sex chat room all to help her finally get some sleep. None of it works. Her lack of sleep is what makes her so driven, and will also lead to a crack in the case.

In this episode we get a glimpse of something that happened before season one, before the arcade, and before fsociety. We witness Mobley recruiting Romero to join fsociety. Romero has just gotten out of jail, so he’s wary, and all he has is an arcade that’s entirely off the grid, fallen through the cracks, that he’s trying to rent to Mobley and his hacking friends. Instead, Mobley gets Romero to join fsociety since he’s a genius with computers. The story Romero tells of the arcade, and how it came into his hands is a long history of bad shit happening to everyone who owned it. Nearly every owner has ended up dead or murdered. Which is interesting, because when we jump back to the present, the curse continues with Romero. Mobley drops by Romero’s mother’s house, where Romero lives, and finds Romero murdered. Mobley is scared someone is picking off people involved with the hack in one way or another. First Gideon, and now Romero, and even though Darlene assures Mobley he’s safe, he doesn’t trust her or Elliot.

The other problem is Romero’s murder catches the attention of the FBI, and in particular Dominique since her name is on a list of FBI agents Romero had printed out. It’s clear Romero was a hacker, they just don’t know what he was involved with. The cops royally screw everything up though, and any information they could have gotten out of Romero’s computer goes up in smoke since no one bothered to check if the drives on his computer were booby trapped before trying to remove them. Dominique’s insomnia leads her to revisit Romero’s mother after the cops leave, to try and see if she can learn anything. She finds out Romero’s only friend was a chubby guy (Mobley) and she finds a flyer for “the end of the world party” Darlene put on at the arcade after the hack. When Dominique goes to the address, she finds out the arcade is linked to fsociety. Just a couple of strange things I noticed: