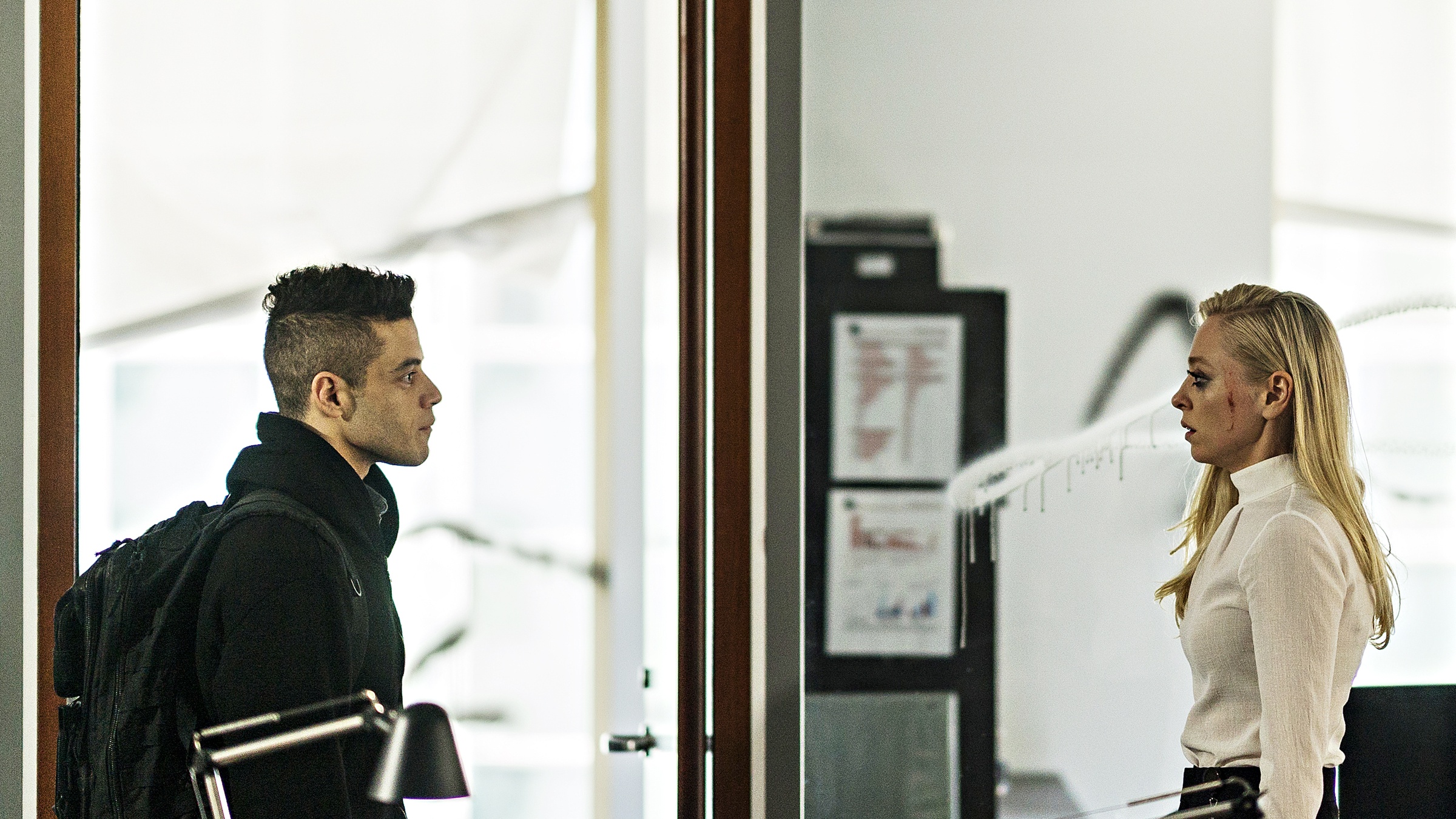 This tension filled episode begins with a flashback to Angela as a young girl.  Her mother is dying of cancer because of something Evil Corp has done, and she’s thrown a goodbye party for herself before she succumbs to her illness.  It’s an unsettling idea for a child to process, and the knowledge her mother is dying and there’s nothing she can do about it makes Angela feel helpless and afraid.  Instead of enjoying and savoring the last moments she has with her mother, Angela hides in the family room watching Back to the Future cartoons.  Elliot’s father notices, and sits down to talk to her.  He nudges her to talk to her mother and spend some time with her.  It’s clear he knows he’s dying too, and asks Angela to look after Elliot if anything ever happens to him, and to give him the nudge Mr. Alderson won’t be there to give Elliot himself. 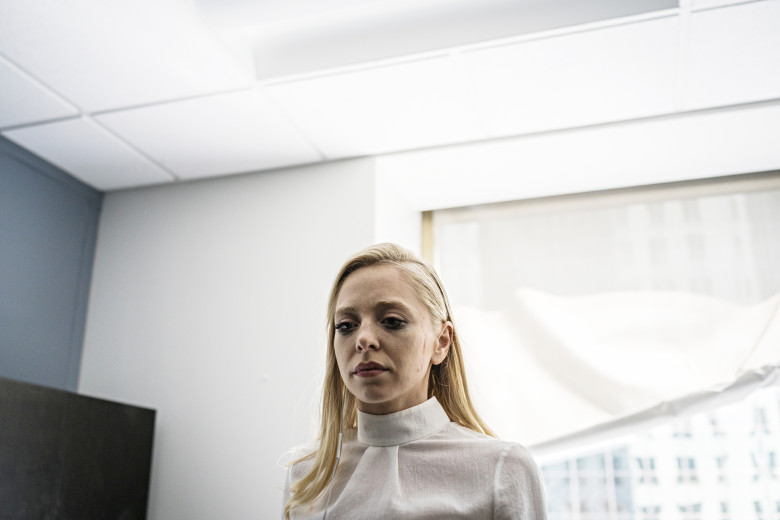 The loss of a parent is a devastating thing for a child, so Angela’s inability to deal with the knowledge her mother will be gone soon is understandable.  Avoiding the problem won’t make it go away though, and when she does finally go speak to her mother she’s resentful of the party, and of the false idea they’ll see each other again.  Her mother tells her something interesting that has echoes in what Zhang/White Rose has been insinuating all season, “This isn’t the end.  There’s another world out there for us and we’ll see each other again.”  Another world, or parallel universe, where everyone who’s dead will be alive again is clearly something Zhang/White Rose is aiming for access to.  Is it madness to believe it’s possible?  Is Angela deluding herself with hopes she may be able to see her mother again?

The confrontation between Elliot and Angela is tense, especially given the Evil Corp building is still being ransacked by hooligans.  Elliot knows she’s been working with Tyrell, Mr. Robot, The Dark Army, and White Rose.  Together they’ve all used his fondness for Angela to manipulate him into doing something he didn’t want to do.  He wants to stop Stage 2 from taking place, but this is the moment Angela nudges Elliot.  She tells him White Rose is going to save the world.  When Elliot argues that people will die if Stage 2 goes into effect, she tells him people are going to be fine, including her mother and his father.  She believes in the parallel universe theory White Rose has told her.  In her mind it will be a type of Utopia where all of the dead will be alive again, almost like heaven.  When Elliot pushes her further, she completely shuts down, goes cold, and won’t talk to him anymore.  He wants to know where Tyrell is, and in her silence Elliot notices a food bag from the Red Wheelbarrow Restaurant and quickly puts it all together.  He calls Darlene to tell her and the FBI where they can find Tyrell, while he rushes over to the Evil Corp warehouse to stop the explosion. 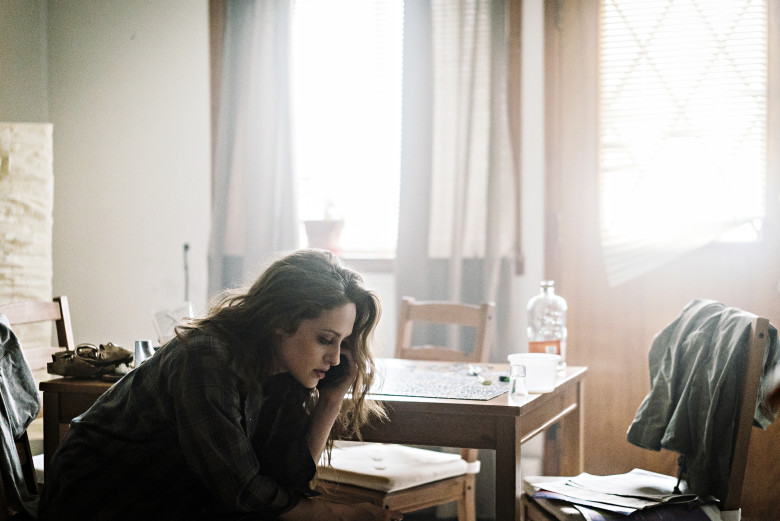 Darlene calls Dom to tip her off that Tyrell can be found at the Red Wheelbarrow Restaurant, which is the most solid chance Dom and the FBI have of taking Tyrell into custody.  Dom has no idea her boss Santiago is on the take, snugly in the pocket of White Rose.  Santiago drags his heels on apprehending Tyrell, and plays it off as if he’s being careful since this may be their only chance at taking Tyrell.  Dom knows something’s up, and sits angry at her desk until she and her partner decide to go grab lunch, unsurprisingly at the Red Wheelbarrow.  Santiago has already tipped off Irving that Tyrell has been made, but when Zhang/White Rose finds out their plans are not to be altered.  Dom notices smoke coming from the kitchen and soon finds the basement where Tyrell was staying, but no Tyrell.

Tyrell has been in the dark as to what’s really going on, who Elliot truly is, and the purpose of their work.  He’s completely unaware his wife is dead and his son is in a foster home, instead believing once Stage 2 takes place he’ll be on a plane with them both heading to the Ukraine.  When it’s clear he’s no longer of any use, he thinks Irving is going to kill him, but that’s not the plan at all.  Irving gives him instructions for what to do next, which appear to let him know about his wife’s fate.  It’s unclear if the parallel universe theory is told to him, but it would make sense that he does what he’s told in the hopes of seeing his wife again, no matter how crazy it all makes him appear in the public eye.

Elliot’s only chance of stopping Stage 2 now that the Evil Corp building has been ransacked and Angela has had him fired, is to sneak into the warehouse and stop the attack in the very building it’s supposed to take place in.  The problem is whenever he gets close to executing a patch to stop the Dark Army’s malware, Mr. Robot takes over and Elliot wakes up again five to ten minutes later somewhere else.  It’s reminiscent of the movie Groundhog’s Day, only each time Elliot comes to again, he needs to go back and try to finish thwarting the Dark Army.  The more he fights Mr. Robot the smaller these missing time windows become.  They appear like glitches in a video feed as they happen.  A struggle rages between his two personalities, and soon he’s fighting his way to the computer servers. 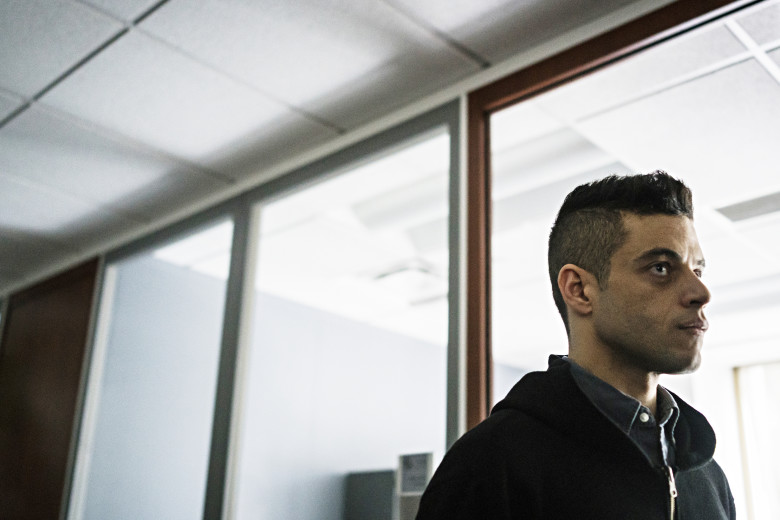 Mr. Robot makes Elliot fall down stairs, bang his head on the walls, and does everything in his limited power to stop Elliot from reaching the servers.  It’s like the scene in Fight Club where they reveal that all of Jack’s interactions with Tyler Durden have been just Jack by himself.  When Elliot reaches the servers, he’s locked out.  When he tries to use the computer to access the room, Mr. Robot throws him against the walls.  Elliot opens a text box on the computer to have a dialogue with Mr. Robot, and seemingly convinces him White Rose and the Dark Army have been using him.  There are no records in this building, and Elliot proves it to him.  It seems to sway Mr. Robot and he allows Elliot to get into the room and manually stop the servers from blowing themselves up.  Stopping Stage 2 is a huge relief to Elliot, and he walks the streets afterward with a joy that isn’t matched by all of the people he sees.  Something terrible has happened, and he has no idea what it is.

All this time it seems Elliot was sent on a wild goose chase about what Stage 2 really was.  Stopping the warehouse explosion and rerouting all of the paper documents were just a manipulation.  All 71 of the Evil Corp warehouses Elliot rerouted documents to have exploded or caught on fire, leaving thousands of people dead.  Elliot’s moment of elation at having stopped the Dark Army is like a rug that’s been pulled out from under him when he realizes he helped make all this possible.  Zhang/White Rose has proven to be a master manipulator.  All of this has been by his design, including the UN vote to allow China to annex the Congo.  Everything seems to lead to his parallel universe theory, but how will White Rose actually open a gateway between dimensions, and what does it have to do with the Congo and a nuclear reactor?  Mr. Robot has been on fire this season.  The episodes have been so well written and crafted, they’ve made me forget about last season’s narrative stumbles.