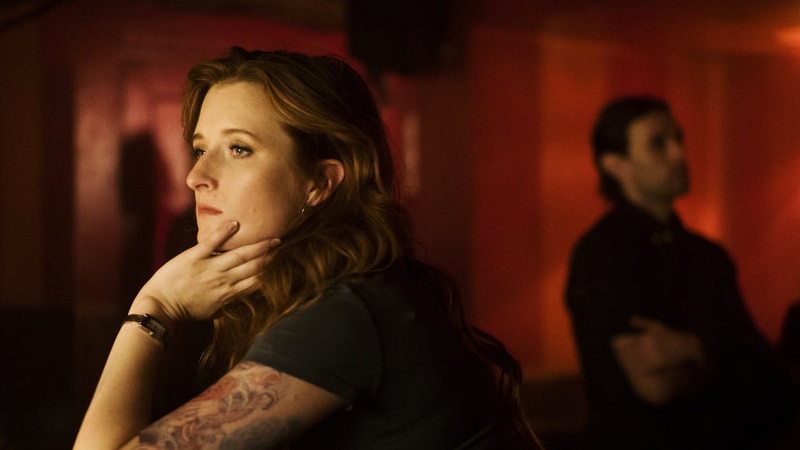 For a very long time there’s been a divergence in Elliot and Mr. Robot’s interests that’s left a huge wall between the two sides of his personality.  Both personas worked in opposition of each other’s goals, until it became evident after Stage 2 that they’ve both been used by White Rose and the Dark Army.  The idea of Elliot and Mr. Robot working together and speaking together, or even sharing thoughts with each other, has been closed down for a long time, instead they’ve both been suspicious of each other, until now. Stage 2 wasn’t what either of them had planned on, and White Rose exploited Tyrell to alter their plan until it became a national disaster.  The chasm between Elliot’s two personas is so deep that it’ll take something to bridge the radio silence.  A note scrawled in soap on the mirror of Elliot’s bathroom from Mr. Robot to him finally does the trick and gets them on the same page. 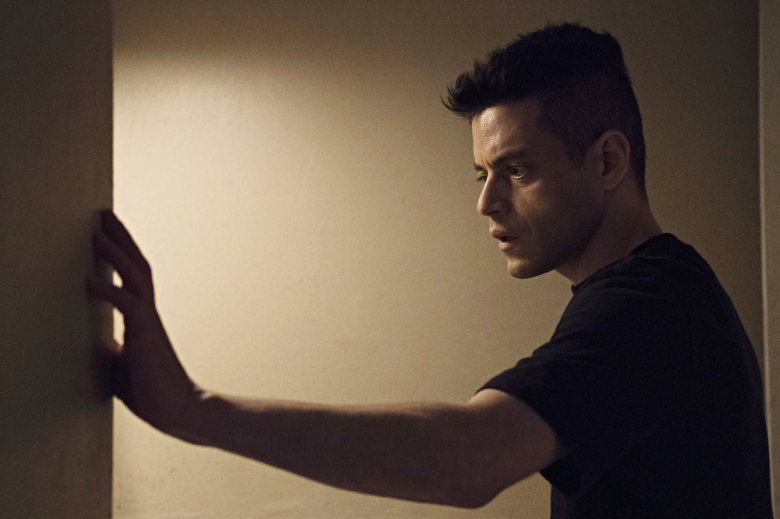 The structure of the episode itself is interesting, since we’re looking at two separate timelines jumbled together.  In one timeline we see what Mr. Robot did before he scrawled the message to Elliot, and in the other we see what Elliot did with this information to further their shared goals.  In a way, Elliot has to be a detective.  With no memory of anything he does as Mr. Robot, he has to piece it all back together and use what he knows and what Mr. Robot knows to come up with a game plan.  The editing shows the actions of both men as if they are happening simultaneously, and it’s done so we can discover what they discover.  Instead of knowing too much all at once, the revelations build until the final scene of the episode puts Elliot’s life in jeopardy.  It’s a smart way of mixing the two timelines, since if we knew everything Mr. Robot did first, instead of discovering it, a lot of the tension and excitement of the episode would disappear.

At the end of the last episode, there’s a beautiful shot of Elliot and Angela on opposite sides of her door talking about the past, and reminiscing about a simpler time they both wish they could go back to.  This was Elliot reaching out to a friend who’s losing her mind.  He’s trying to be there for her in the way she’s been there for him in the past.  His attempt to reach her does not change the downward trajectory of her sanity though.  Angela, always smooth and polished with a cool exterior, now resembles a disheveled vagrant.  Her mind is scattered, she’s paranoid, and still convinced White Rose has a plan for them all.  Seeing her like this scares Elliot, and though he tries to tell her that her belief that their dead parents can be rescued is a lie, she doesn’t believe him.  Her apartment looks like the manifestation of her disordered mind.  It’s nothing like the penthouse we’ve seen before.  There’s garbage all over the place, the walls and windows have been painted black, and there’s a constant stream of bad news from a television playing in the background.  At one point she decides to flee her apartment, certain she’s being followed, only for a van to show up, with men asking her to get in.  Is this even real, or is all of this a manifestation of her broken mind, much like Mr. Robot is for Elliot? 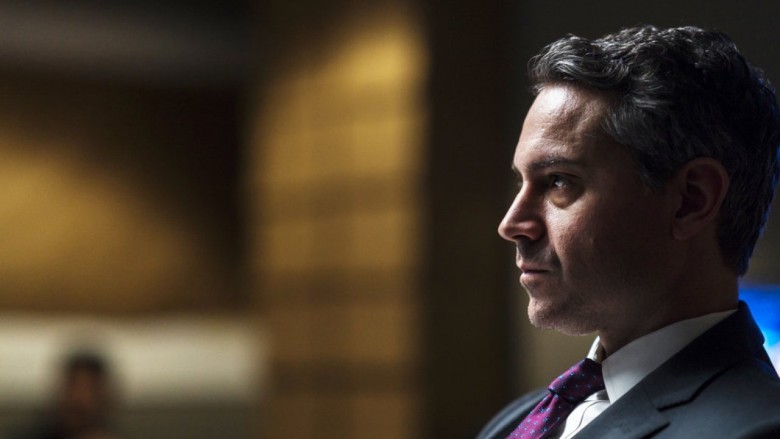 Mr. Robot discovers just how deep the manipulation of his plan has been when he pays a visit to the newly released Tyrell.  Tyrell is a broken man, who lost everything in the pursuit of Mr. Robot’s idealism.  The scene of him coming home for the first time is heartbreaking.  He collapses and weeps when he sees the crib his child once occupied, now empty.  Mr. Robot’s sudden appearance does not make him happy, and their discussion soon turns violent as Tyrell unleashes his anger on Mr. Robot.  The beating would be a lot worse, but Price shows up unexpectantly to speak to Tyrell and who he believes is Elliot.  He announces Tyrell will be the new CTO of Evil Corp, but he’ll be a powerless puppet.   Price has known they were both behind the 5/9 hack and fsociety, and the only reason they were allowed to do what they did is because powerful men like himself and White Rose allowed them to do it.  Instead of helping their idealistic goals, the hacks only enriched the wealthy.  Price mocks them, which gets Mr. Robot thinking about a way to get back at them, but Tyrell knows the Dark Army controls everything, and tells Mr. Robot they also own the FBI.

With this news, coupled with the discovery through Trenton’s email that Romero kept the keys to the 5/9 hack on his computer in case they ever needed to reverse what they’ve done, Elliot and Darlene decide to game both sides of the equation.  Darlene will use her friendship with Dom to get access to Romero’s data so she can reverse the hack and rebuild all of the information it wiped out, and Elliot will attempt to contact White Rose to discuss his plans for Stage 3 of the hack.  Things don’t go well with Darlene’s attempts to copy Dom’s key card, so she improvises and seduces Dom to get access to it, only she’s caught and hauled into the FBI.  Santiago crashes Dom’s interrogation of Darlene, and is confronted by Darlene’s knowledge there is a Dark Army mole in the FBI.  A worried Santiago calls Irving, and soon White Rose knows about the possibility to undo the hack, and that their connection to the FBI has been discovered.  Elliot meets with White Rose’s representative to discuss Stage 3, but they copy everything off of his laptop and tell him White Rose isn’t interested in Stage 3.  Elliot’s ruse works, and soon the Dark Army opens up a pdf of his Stage 3 plan, which is actually malware that gives Elliot access and control of the Dark Army’s computers. 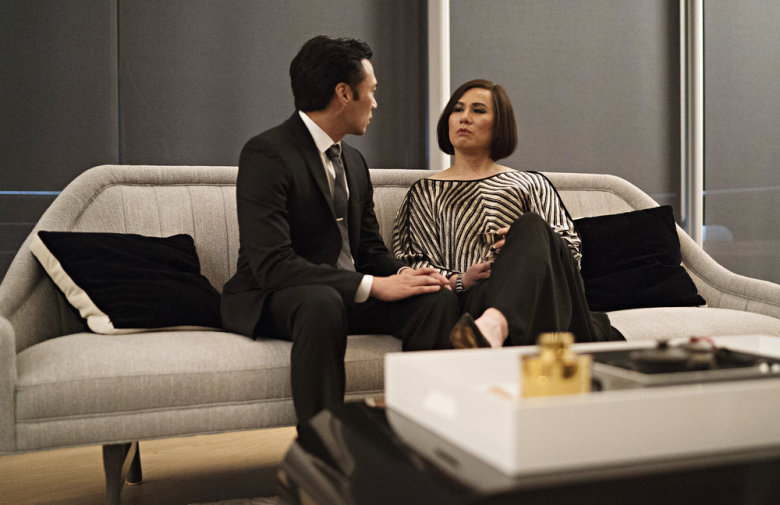 For the first time in a long time we see Zhang dressed as White Rose, and it becomes clear she’s impatient for their operation to move from the U.S. to the Congo.  A month is far too long to wait, and she begins throwing a temper tantrum and smashing things.  The man Elliot met with tries to calm her, and in the conversation we learn White Rose may have anticipated Elliot’s move, and be aware of what he’s doing.  The part that surprises and confuses her is Darlene at the FBI, and the possibility of Romero’s computer containing the ability to reverse everything they’ve done.  We know Elliot’s father died working for White Rose, and now she gives the order for her assistant to have Elliot murdered as well.  There’s a lot at stake moving into the finale, and we know White Rose has a tendency to use up people and kill them when they’ve fulfilled their roles.  Will Elliot and Darlene escape unscathed, or will they become the next victims of White Rose’s plans?