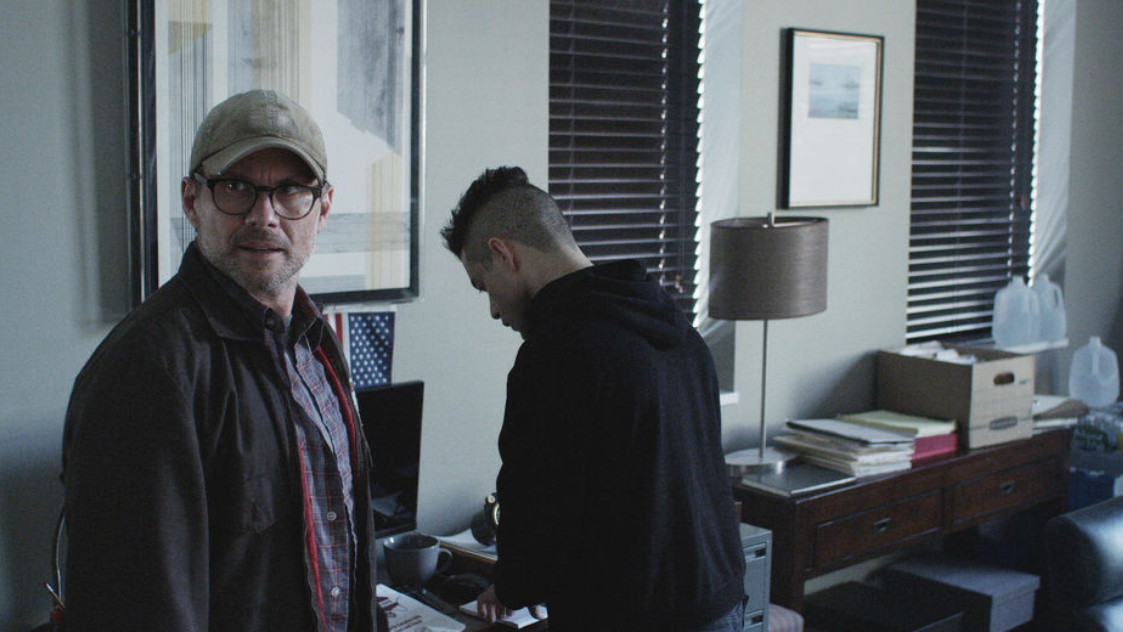 The season finale of Mr. Robot brought everything to a head, while at the same time laying the groundwork for the next season.  In typical Mr. Robot fashion there were some big twists.  Some were easy to predict as they happened, but this didn’t take away from them being interesting.  Sam Esmail doesn’t care if you see the twists coming from a mile away, as the big season two twist is evidence of, but none of the twists at the end of the finale felt false.  These twists actually make what’s coming next for our characters more interesting while also making it clear Mr. Robot has certainly made it past the half way point of the story.  I wouldn’t be surprised if Mr. Robot had only two more seasons before the story wraps itself up, so it’ll be interesting to see how Esmail handles finishing his tale.

The biggest difficulty for Elliot this season has been he and Mr. Robot’s inability to communicate.  This wall between them (or really between the two sides of himself) has made him ineffectual at being able to stop the Dark Army from both using his two personas against each other, and from creating the chaos of the 71 building explosions that left so many people dead.  Fearing Darlene has been captured and/or killed, Elliot needs these two sides of his persona to come together in order to save Darlene from the Dark Army and the mole in the FBI.  The scene where Mr. Robot and Elliot finally do speak is on a Ferris wheel on Coney Island, in a clear homage to The Third Man.  Just like Orson Welle’s Harry Lime and Joseph Cotton’s Holly Martin finally meet face to face and talk after a huge chunk of the film, Mr. Robot and Elliot finally find themselves working as a team, but their teamwork is short lived since Irving captures them. 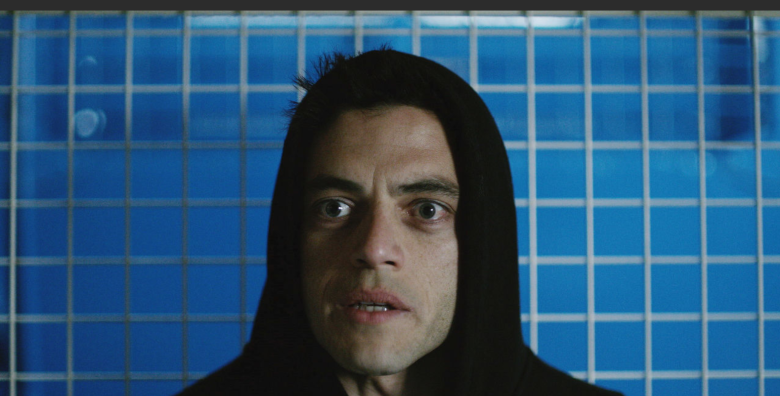 Dom has been suspicious of Santiago’s motives and reasoning for a long time, but has been unable to put her finger on why he seems to stifle their investigation at every turn.  She confronts him when he attempts to whisk Darlene away without anyone knowing, and is knocked out.  Dom wakes up zip tied in the back seat of his car with Darlene.  When she berates Santiago for being a dirty cop, he tells her she has no idea what the Dark Army have over him to make him comply with their demands, but she’s going to find out by the end of the episode.  She’s brought to the Dark Army farm Tyrell hid out at, and put in the barn with Darlene, Elliot, Mr. Robot, Leon, and some Dark Army goons.  Dom has been the type of FBI agent who puts her job and her ethics above all things, so Santiago has made a huge mistake involving her.  He pleads with Irving for Dom’s life, but it seems Irving is going to kill her with an axe.  Instead Dom is promoted to be the Dark Army’s new mole inside the FBI, and Santiago is viciously murdered.  She refuses, but Irving makes a threat to her family that’s impossible to ignore.  Dom has no choice but to go along with them, vocalizing later that Darlene is the worst thing to happen to her, and has effectively ruined Dom’s life and career. 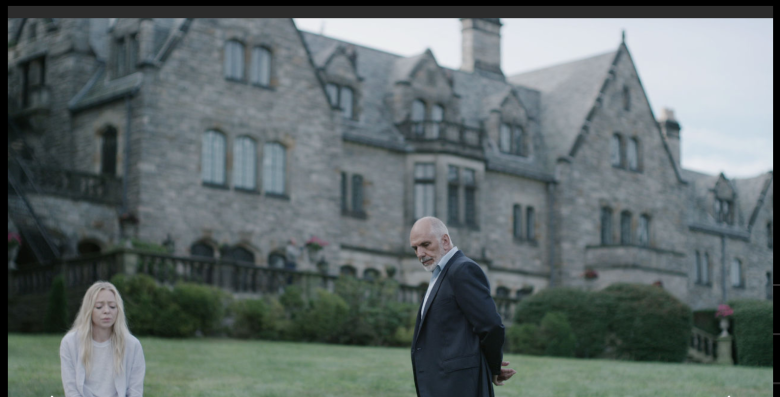 The last time we saw Angela, she was wandering the streets like a crazy bag lady right before some men in a van took her away.  When we see her again it’s hard to tell where she is.  I first thought she might be in a mental institution, but she’s been whisked to safety by Philip Price, and brought to one of his mansions so he can protect her.  He knows what White Rose does with people once they’ve outgrown their use, and fears she may try to have Angela killed.  There’s a very big reason Philip wants to protect Angela from White Rose, and it has to do with Angela’s mother.  She and Philip were a couple.  Philip sensed where his life was going, as well as the danger of his long term symbiotic relationship with White Rose/Zhang, so he was intentionally cruel to her mother to push her away.  She was pregnant though, and decided Philip was a monster who she didn’t want her child having anything to do with, so Angela was raised by another man she believed was her real dad.  As if learning your true parentage wasn’t shock enough, she’s devastated to learn White Rose is delusional and the promise of being able to see her mother again in exchange for her cooperation in helping Phase 2 blow up all of those buildings was a lie.  Philip tells Angela that White Rose has only done these things to spite him, crushing her only way of her being able to come to terms with her hand in the tragedy and making it clear she was just being used.  Will Angela be able to pick up the pieces of her life and get the revenge on White Rose she craves?  Or will it all just drive her insane?

Back in the barn, Elliot and Mr. Robot try to think of a way to get out of the situation they find themselves in.  Leon has Darlene at gunpoint, and they’re surrounded by Dark Army goons with guns.  White Rose’s assistant, Grant, arrives to kill Elliot, while White Rose watches the entire thing from a security camera feed.  This may be it for Elliot and Darlene, as they’re both on their knees with guns pointed to their heads.  Elliot pleads with White Rose, promising he can help move her operation to the Congo smoother and faster than things are currently going.  Mr. Robot merely watches helplessly as their options appear to run out.  Grant’s can’t see the big picture of White Rose’s plans like Elliot can, and Elliot moves White Rose so much that she decides to spare his life.  Leon takes out every one of the Dark Army thugs with a barrage of bullets, leaving only Grant, whose phone rings.  It’s White Rose.  She tells him she loves him, and that when her project is complete she’ll search for him on the other side.  Clearly White Rose truly believes in the parallel universe she touted to Angela, but what is she so desperate to accomplish or reach if it’s true?  Grant kills himself, and Leon immediately gives Elliot a computer to launch the hack to get the Congo operation up and running.  His quick thinking has saved Darlene and himself, but is it just a momentary reprieve?

Darlene, Dom, and Elliot walk away from the barn with their lives, but they’re all forever changed.  Dom is now miserable, working for White Rose out of fear for her family’s safety. She gives Elliot access to the FBI to find Romero’s encryption keys, only they aren’t there.  Trenton was wrong.  It wasn’t Romero who’d made a back door to reverse everything they’d done, it was Mr. Robot.  He hid the encryption right under Elliot’s nose on a burned CD in Elliot’s apartment.  The key to reversing everything they did is buried in the metadata of a photo of Elliot and his father together.  There’s been a lot of talk of reversing the hack, going back in time or to a parallel universe to be with Elliot and Angela’s dead parents, and there’s also a clip from Superman where he flies around the Earth so fast he goes back in time to save Louis Lane from death.  With the stroke of a key Elliot and Mr. Robot triumphantly reverse the 5/9 hack, but what comes next?  Will everything go back to the way it was before the hack?

Elliot and Mr. Robot are clearly going after White Rose next season, but in an after credits sequence we see he’s also going to have Fernando Vera and his thugs to deal with.  The last time we saw Vera was in season one, when Elliot broke him out of prison.  As a thank you, Vera killed Shayla, the only person Elliot connected with in any meaningful way.  It’s unclear what Vera’s intentions are, but whatever happens will be interesting and entertaining.  Sam Esmail did a great job of getting Mr. Robot back on track after last season’s sophomore slump, and it’s going to be intriguing to see where he takes the show in the future.