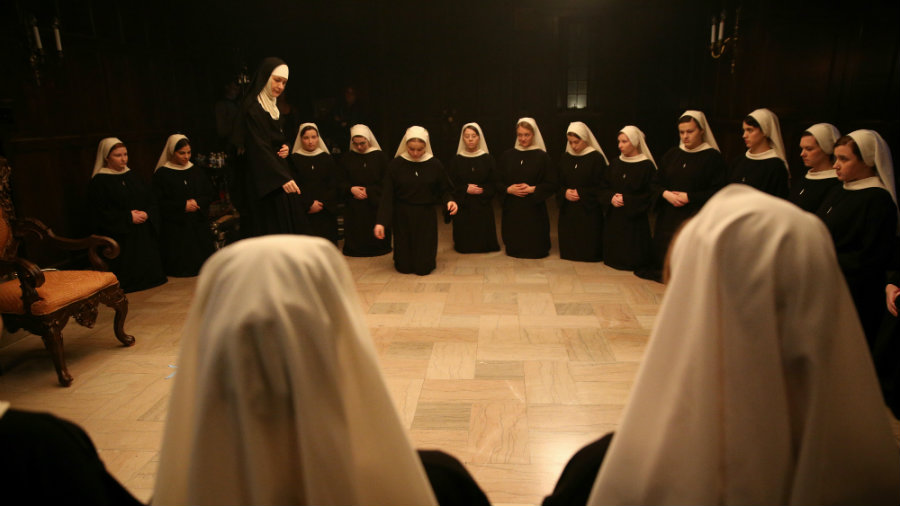 The idea of a period coming-of-age drama about a teen girl’s relationship with God might not sound too enticing, but in the able hands of filmmaker Maggie Betts, Novitiate deserves all the praise it received at the Sundance Film Festival and more.

Set in the early ‘60s, Margaret Qualley (The Leftovers) plays Cathleen Harris, a young girl raised by single mother Nora (Julianne Nicholson). Nora is so non-religious, she’s shocked to learn of Cathleen’s interest to become a nun by joining the Sisters of Blessed Rose, which would mean being sequestered at their convent for life. The abbey’s Reverend Mother (Melissa Leo) has dedicated her life to God for 40 years, but she’s gotten bitter about a lot of things not going the way she expected. When the Catholic Church announces it’s going to make a series of changes dubbed “Vatican II,” she becomes particularly upset for reasons that will become clear later, taking it out on her young charges.

It might be hard to understand why Novitiate would be something of interest to seek out, but it shows a level of dramatic storytelling where you constantly feel it must have been adapted from a beloved novel. In fact, this is a completely original screenplay by Ms. Betts, and it’s a fantastically layered piece of work. 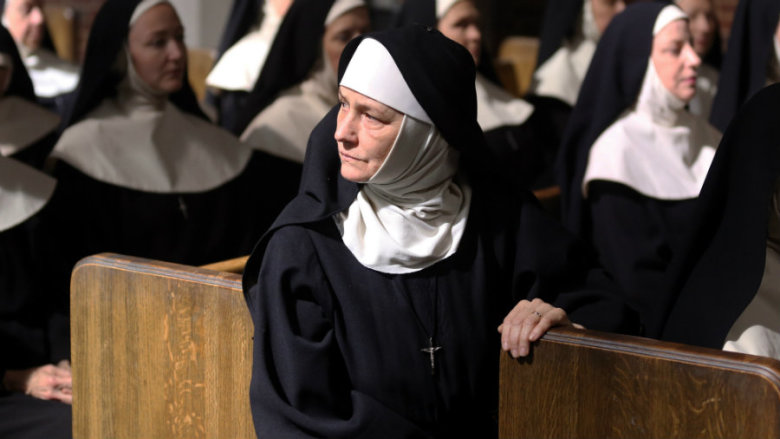 Who knows what inspired Betts to set a story in this time period and setting, but it’s so distinctively unique, maybe because Betts deliberately made a film that involves practically no men either behind or in front of the camera. When you think about the number of genres that tend to feature all-male casts – war movies, Westerns, prison films – Novitiate is quite groundbreaking for that fact alone, but you also end up learning a lot about what’s involved with becoming a nun. The 6-month period as a postulant is almost a cakewalk compared to the interim novitiate stage in which the aspiring nuns are tested over and over by the Reverend Mother, who forces each of them to confess their flaws and sins in front of their peers.

It’s impossible to talk about Novitiate without discussing the amazing, inimitable Melissa Leo, who continues to give incredibly confident performances that make it impossible to ignore her presence. Leo plays the Reverend Mother in such an imposing and intimidating way, that when she chews out one of the novices, you really believe the younger actor is legitimately frightened about what Leo might say or do.

The film’s perspective changes over the course of the film, where at first it’s all about Cathleen and her relationship with her mother. Once she arrives at the convent, it becomes more of an ensemble piece with each of the other young actors getting their moments with their teachers who range from sweet (Dianna Agron’s Sister Mary Grace) to a chip off the Reverend Mother’s stern demeanor (Ashley Bell’s Sister Margaret).

Qualley does a fine job with her first leading role, showing her to be on par with a Kristen Stewart with far more range. She’s surrounded by a fantastic young cast, including Morgan Saylor, Liana Liberato, Rebecca Dayan and Maddie Hasson, all of whom show tremendous potential. Nicholson delivers another amazing performance in a far smaller role, and when she shows up at the abbey to confront the Reverent Mother about her daughter’s health, it’s an explosive scene that’s a high point of the movie. 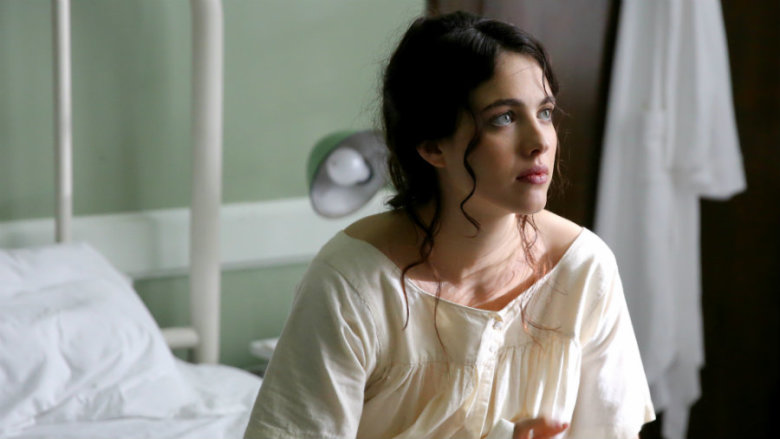 Eventually, the story shifts back to Cathleen and her own doubts about whether her faith is living up to the expectations she puts on herself, which causes her to stop eating and making herself sick. The implications of Vatican II has a huge impact on this last act, since the edict from the Catholic Church means the Roses won’t be as special anymore – they will basically have the exact same status as a normal civilian. Can you imagine dedicating 40 years of your life to something only to learn it’s no longer true? That’s the dilemma in which the Reverend Mother finds herself, as she takes it out on the novices, although the nuns-in-training are no longer allowed to use “The Discipline” as penance for their purported sins.

All the credit for Novitiate should go to Betts and the incredible cast and crew she’s assembled, but a special medal of honor goes to composer Christopher Stark. It’s hard to believe this movie is Stark’s first credited film score because what his music, especially the choral work, brings to the film really takes it to another level.

Betts proves herself to be a fantastic storyteller who really gets you thinking, and Novitiate is intense and riveting dramatic storytelling we rarely get to see in any given year. It’s also a film that forces you to examine your own relationship with faith and God. As much as you might envy the ambition and commitment these young nuns have in showing their love to God, you wonder why they would put up with such humiliation at the hands of the Reverend Mother, and why someone meant to be teaching love can be so darn vicious.