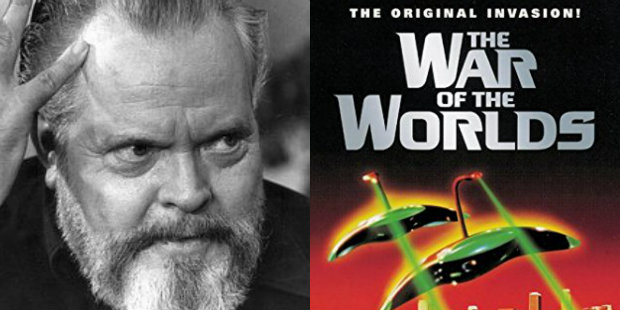 Everyone knows the story of H.G. Wells’ alien invasion classic War of the Worlds, since it’s been made into a number of classic movies, including a fairly recent one by Steven Spielberg.

Not as many people know that actor and director Orson Welles went on the radio in 1938 and read a radio play based on Wells’ novel as part of his radio anthology series, The Mercury Theater on the Air, and scared the bejeesus out of the country, who thought an actual alien invasion was happening. (Woody Allen used this radio trivia as the basis for one of the segments in his 1987 movie Radio Days.)

Royal Viking Entertainment producer Sean Sorensen has written a spec script called WE INTERRUPT THIS PROGRAM about the broadcast, which he’ll be teaming up with Echo Lake Entertainment to finance as a film. They’ll be going out to directors soon in order to start filming in 2018.

Welles famously made the broadcast while still running the Mercury Theater and before he made his film directorial debut with Citizen Kane. The film will cover the panic the broadcast caused, as well as the behind the scenes struggles between Welles and his producer John Houseman once they realized what was happening.

Doug Mankoff and Andy Spauling from Echo Lake are producing with Sorensen and Royal Viking, while FilmNation International will be handling the oversea sales of the project.

Echo Lake previously produced the Cate Blanchett and Robert Redford drama Truth, as well as Alexander Payne’s Nebraska, and they also produce the SyFy TV series Van Helsing, which will be returning for a second season on Oct. 5. They actually hold the rights to the original War of the Worlds radio play by Howard Koch. They’re currently in development on Kirsten Dunst’s directorial debut, an adaptation of Sylvia Plath’s The Bell Jar.

Sorenson is repped by Jon Levin at ROAR.

This film project was first reported by Deadline.