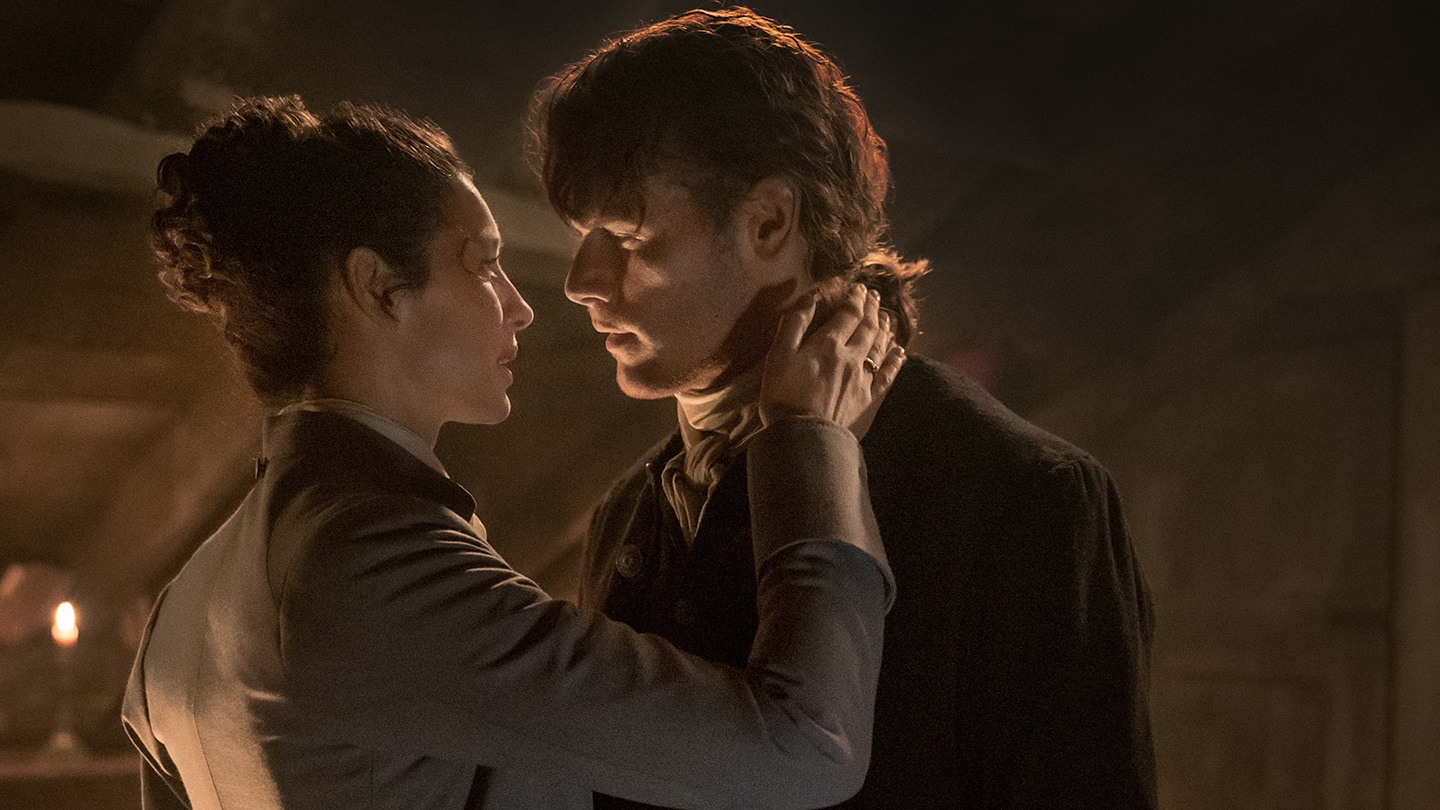 Twenty years is a long time to go without seeing someone you love.  Many things can change in that amount of time, and the people you once knew may be completely different than who they are today.  Of course there’d still be a shared history to draw on, but all of the experiences and choices made during those twenty years apart could alter two people so much, that once they reunited they’d be strangers.  The question for Claire and Jamie then becomes, have they grown out of each other? The best thing about the reunion of Claire and Jamie is Outlander chose not to idealize it and make it this huge sweeping romantic thing where they pick up right where they’d left off.  Instead the actual awkwardness and shock of Claire’s surprise visit is allowed to play out like it would really happen.  If this were just a romance show, they’d soon be off to bed, making love as if making up for lost time, but thankfully Outlander is so much richer than that. 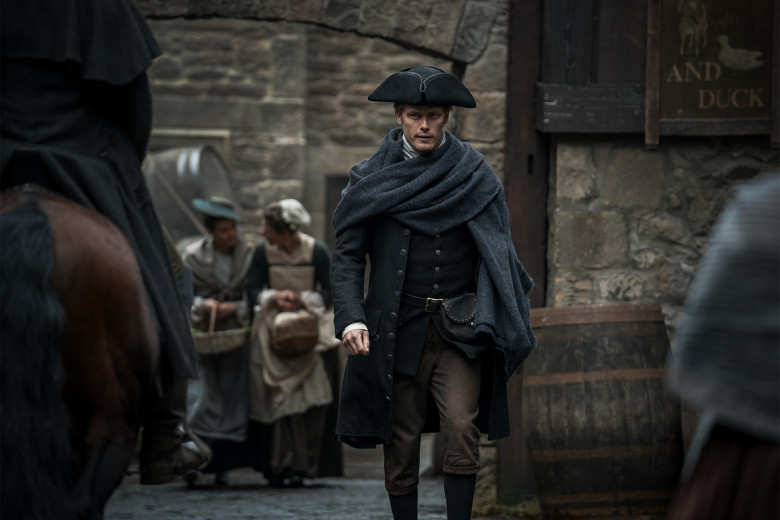 The episode starts off showing us the beginning of Jamie’s day right before Claire surprises him at his print shop.  There are insights to be gleaned from the brief portion of Jamie’s life we see before Claire arrives.  A woman adjusts the knot in Jamie’s scarf before he heads out for the day.  It’s clear there’s a familiarity between the two of them, and this moment is meant to throw us off and make us think this woman may be Jamie’s new wife or girlfriend.  She isn’t.  We also notice Jamie takes great pride in his new trade.  So much so, that he stops to clean his shop’s sign to make sure it looks right.  Inside his shop are two men from his past life in prison, whom he employs to deliver illicit printing materials for Papists and others.  It’s dangerous to be caught with these things, and both Jamie and these men would be hanged if captured.  This brief series of scenes shows there’s still danger in Jamie’s life, and Claire walks into it when she pops back into his life.

When Claire appears to Jamie for the first time outside of his dreams in twenty years, he faints.  The shock is too much for him, and he loses his senses.  When he comes to, she’s crouching above him, and he’s amazed she’s real.  In the first of many moments of comedy in the episode, Jamie’s afraid he’s pissed himself, but it’s just some liquid he knocked to the floor when he fainted.  He needs to change his pants, but is shy in front of Claire.  It’s been so long since he’s seen her that he asks her to turn around when he changes.  She finds this amusing since it’s nothing she hasn’t seen before, and besides, they’re technically still married.  It’s little things, familiarity and comfortability once not even thought about, which now stick out since neither of them really knows where they stand in their relationship anymore.  They’re both excited to be together again, but there’s a lot of catching up to do, especially when Jamie asks about their child.

Claire has pictures she brought with her from the future.  They startle Jamie at first, until she tells him they’re made by painting with light to create a facsimile of someone’s likeness.  Jamie is impressed, and struck by his daughter’s beauty, though his reaction isn’t what Claire expected.  She thinks the picture of Brianna in a bikini puts him off, but that isn’t it at all.  Now that he’s seen their child, he feels the need to tell her about his son Willy.  He hands her a portrait of Willy, and insecurities play in Claire’s mind.  Did Jamie love someone else while she was away?  Is there another woman in his life?  She tells him she understands he’s had a life of his own while she was away, but he confides to her he’s never loved another in her absence.  He’s had relationships, but his heart has always belonged to her.  Jamie in turn asks about Frank, trying to understand how and why Claire came back.  He’s unsure if she’s come back to be with him, or to just tell him news about their daughter.  Once they come to an understanding they want to be together, he doesn’t want her to leave his side for fear she’ll disappear again, so she comes with him to a business meeting at a tavern. 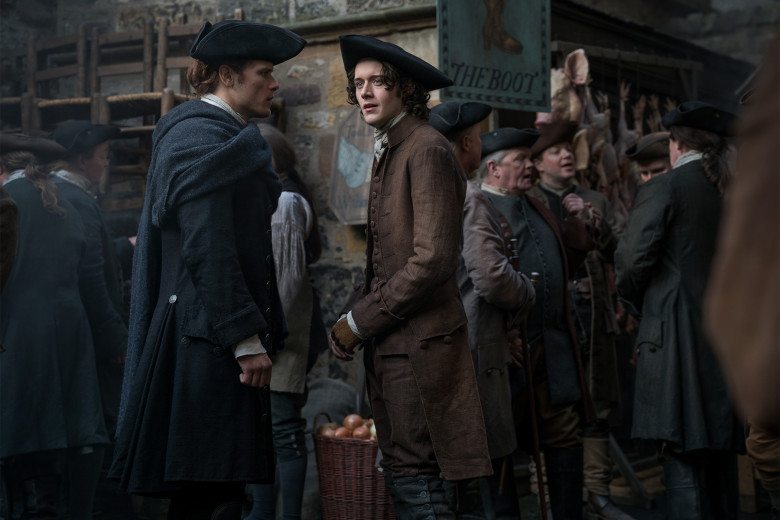 On the way to the tavern they run into Fergus, now a grown man, who believes he sees a ghost when he notices Claire.  He puts her on the spot and asks her where she’s been.  She creates a half-truth explanation that’ll stick as her history.  She believed they were all dead after the Battle of Culloden, so she fled to the colonies where she lived until she heard word Jamie was still alive.  Their reunion is touching, and it’s as if she’s been reunited with a son.  At the tavern she meets Mr. Willoughby, a Chinese man Jamie found stowed away on a ship.   The man was starving and near death, so Jamie took him under his wing and they became friends.  I’m not sure how big of a role this man will play in Outlander, but I hope it’s more than just a passing one.  He’s an interesting character, and Claire really takes to him while Jamie conducts some business in the basement.  It appears someone is blackmailing Jamie.  We’re led to believe it’s about his printing shop, but it’s not.  Jamie is paying hush money to someone who knows he’s smuggling and selling illicit alcohol in Edinburgh.  It’s a dangerous world Jamie lives in, and it’s clear this danger may end up casting a shadow over Claire’s return.

Jamie takes Claire to his home, which turns out to be a private room in a brothel.  The woman we saw at the beginning of the episode is the brothel owner, and not someone Jamie is in a relationship with, much to the woman’s chagrin.  The location throws Claire off, and she wonders why Jamie has a room here.  Is he a frequent customer?  It turns out to be the opposite; the madam is a customer of Jamie’s alcohol.  Claire and Jamie both have a lot of questions for each other, and they catch up over a meal.  There are things that worry Claire about Jamie, and vice versa.  They end up smoothing everything out, and finally allow themselves what they’ve been wanting this entire time, to touch each other again. 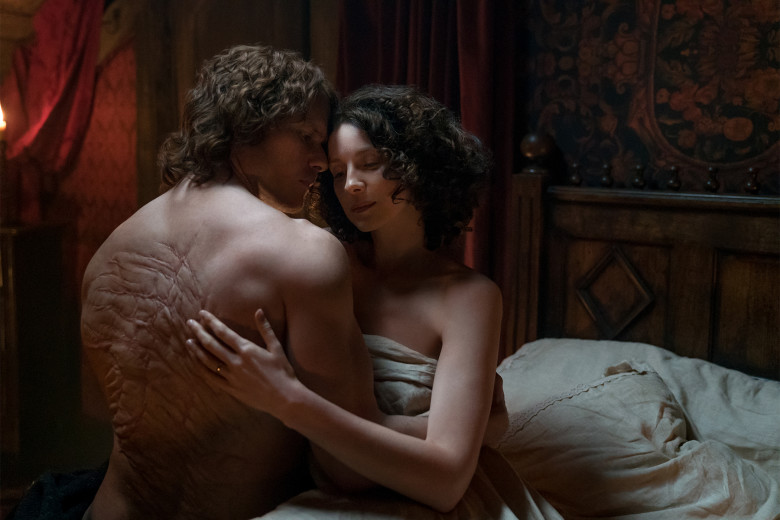 It’s been so long since they’ve been together that it’s like the very first time all over again, almost as if it’s a second wedding night.  They’re clearly excited as they undress each other, but Claire becomes self-conscious as she stands naked before him.  He’s speechless, and she mistakes his awe of her beauty for time having rendered her unattractive to him.  He reassures her this isn’t the case.  When they do retire to the bed, instead of the smooth perfect love making session we expect, they bonk heads.  They’ve been apart so long, that they’ve lost the rhythm of each other.  The moment is incredibly funny, and lightens the tension of the moment, allowing them to laugh.  They don’t want to leave the bed in the morning, but business calls Jamie away.

He asks Claire not to leave while he’s gone, but a knock on the door reveals Ian, the young son of Jenny and Ian.  She introduces herself, and he tells her everyone at Lallybroch told tales that she may have been a white woman or a fairy after she disappeared.  She sets the record straight and tells him about going to America.  Later, she goes downstairs and has an interesting breakfast with the prostitutes of the brothel.  When she returns to her room she finds a ruffian rifling through Jamie’s belongings.  The man threatens Claire and treats her like a whore.  He tells her he’s going to rape her after he finds what he’s looking for, and when she yells at him to leave he grabs her forcefully.  The episode cuts to credits and we’re left fearing for Claire’s safety.  Jamie’s illicit pursuits are catching up with him, the only question is will it keep Claire and Jamie from enjoying their reunion?