Droughtlander is finally over! The season picks up four months after Claire and Jamie wash up on the shores of America. The New World poses new problems for the couple since they find themselves far away from their Scottish home, yet still under the thumb of British rule. America is a beautiful, yet troubled place (it still is for that matter) and Outlander does not shy away from confronting America’s troubled history within the narrative of the premiere.

In the first scene of the episode, we see prehistoric Native Americans building their own sacred stone circle in North Carolina, similar to Craigh Na Dun. Whether this particular stone circle comes into play in the narrative of the season is up in the air, but Outlander continually shows an interconnectivity between everywhere Claire goes and the original standing stones that transported her into the past. The American (and British) treatment of the indigenous peoples of America is an excruciatingly cruel aspect of American history, and one Claire attempts to tell Jamie about given her foreknowledge of what America does to its first peoples as it expands and grows into the country it will one day become. She likens it to how the English treated the Highlanders, but that doesn’t even begin to touch on America’s intentional destruction of native culture. This poor treatment is something Claire and Jamie will no doubt witness first hand this season.

The credits sequence is something Outlander has played with throughout its run, usually when there’s a change of location. This season is no different. The “Sky Boat Song” theme gets an Americana/Bluegrass feel with fiddle and banjo added to the musical accompaniment, as well as new visuals of things to come this season. These changes are a fun way to announce that the show is entering new territory, as well as keeping their credit sequence fresh and interesting. The episode title card sequence is unique to each episode, and this one features the symbol of America (a bald eagle) plucking a fish right out of the water and flying away. Is it a symbolic warning that their new country is dangerous?

America has always been a violent society, and though Claire and Jamie are no strangers to violence, their hopes from a reprieve from it are soon dashed. In fact the first scenes before the credit sequence deal with a member of their company being hanged for an unintentional murder. While Jamie visits Hayes in prison, a stranger inserts himself into Jamie’s life. From the moment Stephen Bonnet (Ed Speleers) asks Jamie for a drink of rum, it’s clear this man is going to have a hand in whatever adventure or misfortune befalls he and Claire’s experience in the New World. 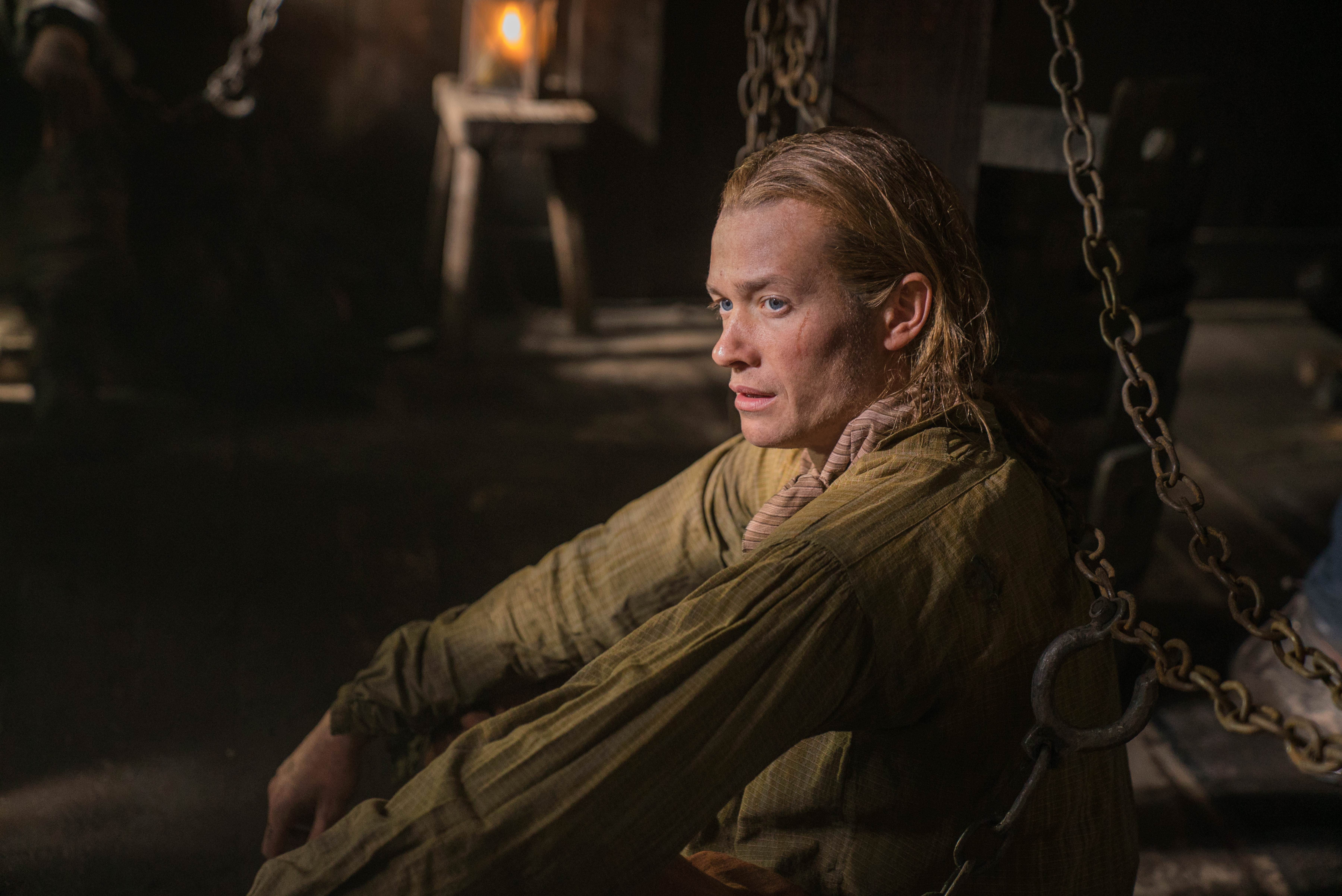 Stephen has a rogue’s charm, a way with words, and a friendliness that lulls people into letting their guard down. His cunning is on full display as the episode progresses. Bonnet is also waiting to be hanged. He’s a pirate and thief, and only escapes his brutal public punishment during a commotion while Hayes dangles from a noose. Bonnet makes a run for it, but his escape goes no farther than hiding in Jamie’s wagon with the body of Hayes. Because he tells Claire and Jamie he was a friend of Hayes, they help Bonnet get past the British checkpoint at great personal risk. If they were caught smuggling an escaped prisoner there’s no doubt Claire and Jamie’s necks could be the next ones stretched for the public. Bonnet owes them both a debt, and in parting warns them to watch out for thieves and outlaws outside of cities.

Jamie plans to sell a ruby he acquired on the Artemis at a dinner party so he and his companions can buy passage back to Scotland. The party is a chance for Claire and Jamie to dress up, rub elbows with powerful people, and entice a German baron to buy the ruby that hangs from Claire’s neck. Jamie has a familial connection in North Carolina that people at the party are familiar with; his aunt Jocasta runs a huge swath of land known as River Run. During dinner Jamie finds himself alone with Governor William Tyron, who offers Jamie a huge land grant in exchange for loyalty. The Governor is having trouble with a group of mountain men who call themselves The Regulators, and knows about Jamie’s military background. His hope is to entice Jamie with the prospect of land ownership in exchange for Jamie’s military expertise when and if The Regulators rebel. It’s an offer Jamie isn’t interested in, since he knows there are huge strings attached. 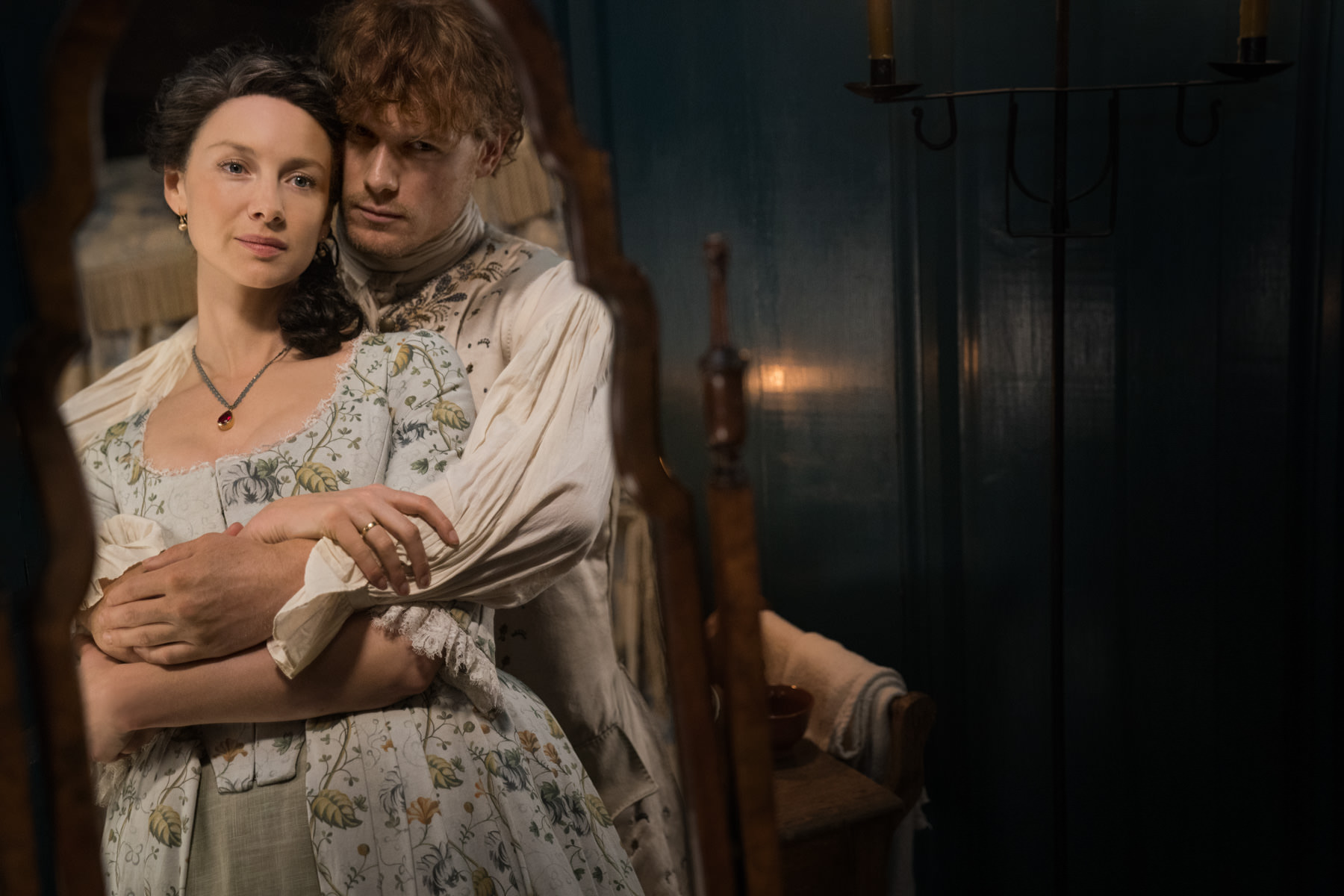 If they were to take the Governor’s offer, Jamie and Claire would find themselves on the wrong side of history once again. They would be loyalists fighting with the Crown, and when the British lost the Revolutionary War, all of their land would be stripped from them. Jamie wants to do something good for the country, since it’s the birthplace of his distant daughter Brianna. He and Claire decide to stay in America along with Fergus and Marsali who is expecting a child. It’s only young Ian, and his dog Rollo that he won gambling, that Jamie intends on sending back to his mother in Scotland. With the money from the sale of the Ruby, Claire and Jamie have enough of a nest egg to set up their new life, but they plan to visit Aunt Jocasta at River Run first.

On the riverboat trip to Aunt Jocasta’s, Claire and Jamie come face to face with slavery in America. The man operating the rudder of the ship seems to be the ship owner’s slave, and when Claire asks about giving him a rest after a long day, she finds her assumptions are not true. He’s been given his freedom for saving the boat owner’s life. A freed slave is a rarity in America in the 1760’s, and though Claire and Jamie have encountered slavery in the Caribbean, they’ve yet to see its unfortunate role in shaping America. It’s a missed opportunity for a real discussion about the brutality of seeing another human being as property, but one they are bound to confront if they intend on staying in the colonies. 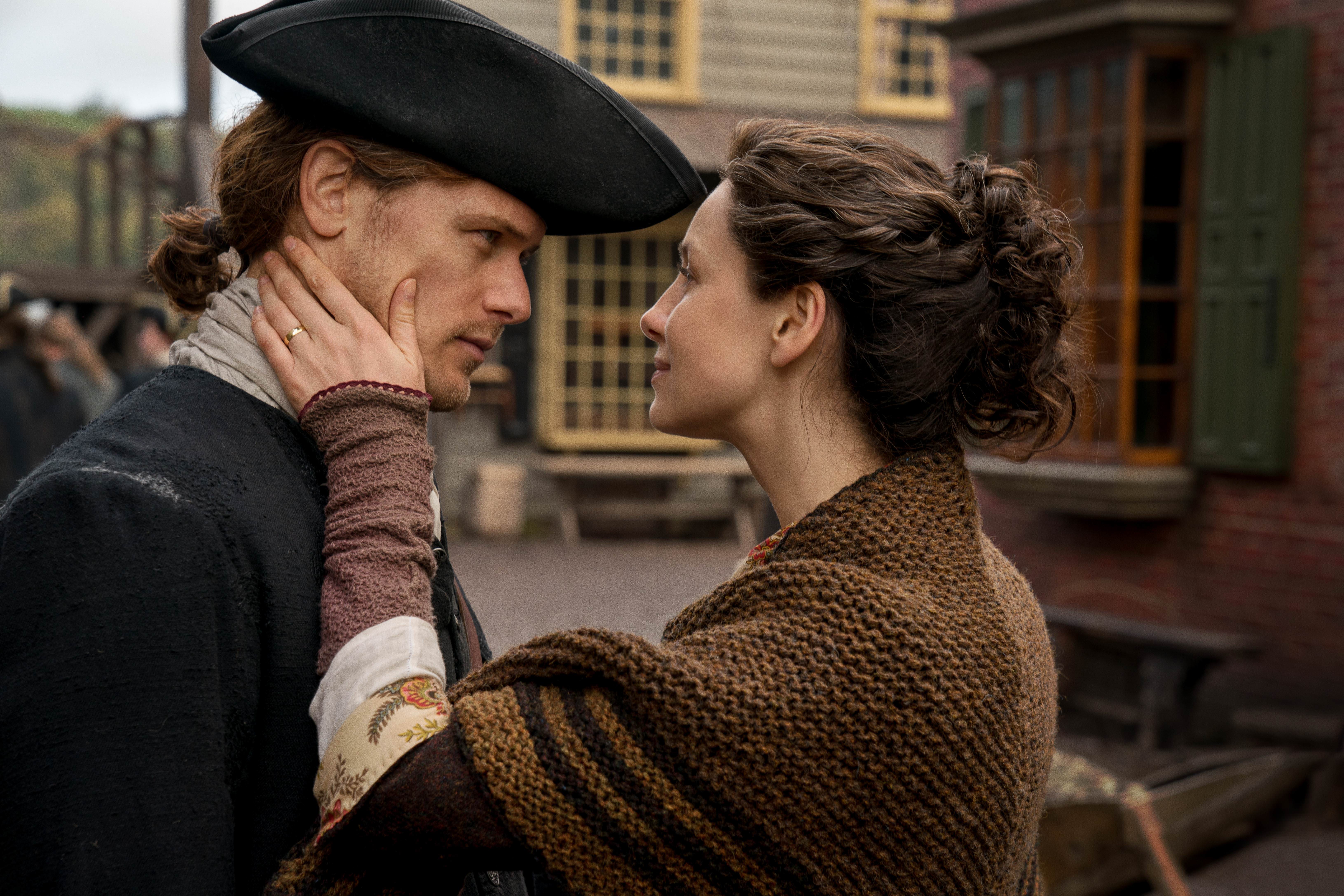 Outlander sets up an idyllic moment on this riverboat journey, as Jamie presents Claire with a thoughtful, and beautiful doctor’s kit. Their happiness is suddenly and rudely interrupted by the appearance of Stephen Bonnet. He’s clearly been following the couple, and instead of repaying their kindness for saving his life, he steals all of their money and jewels, as well as the wedding ring Jamie gave Claire, and then murders their friend Lesley before he leaves. This brutal encounter is ironically juxtaposed with Ray Charles’ beautiful rendition of “America the Beautiful.” This musical choice lays bare the brutality, violence, and (through Bonnet’s actions) the selfishness of America. It’s a land of opportunity, but only if you’re willing to step on others (indigenous people, slaves, or the poor) to get what you want.

Claire’s wedding ring from Jamie is the symbol of their enduring love. Though she tries to swallow both of her wedding rings to keep them from Bonnet, it’s only Randall’s wedding ring she’s left with when Bonnet’s river pirates take their leave. Bonnet is a different type of villain than Black Jack was, but no less dangerous. Jamie is not one to let things go, so we are in store for a revenge plot pitting Jamie and Stephen against each other for at least a portion of this season.