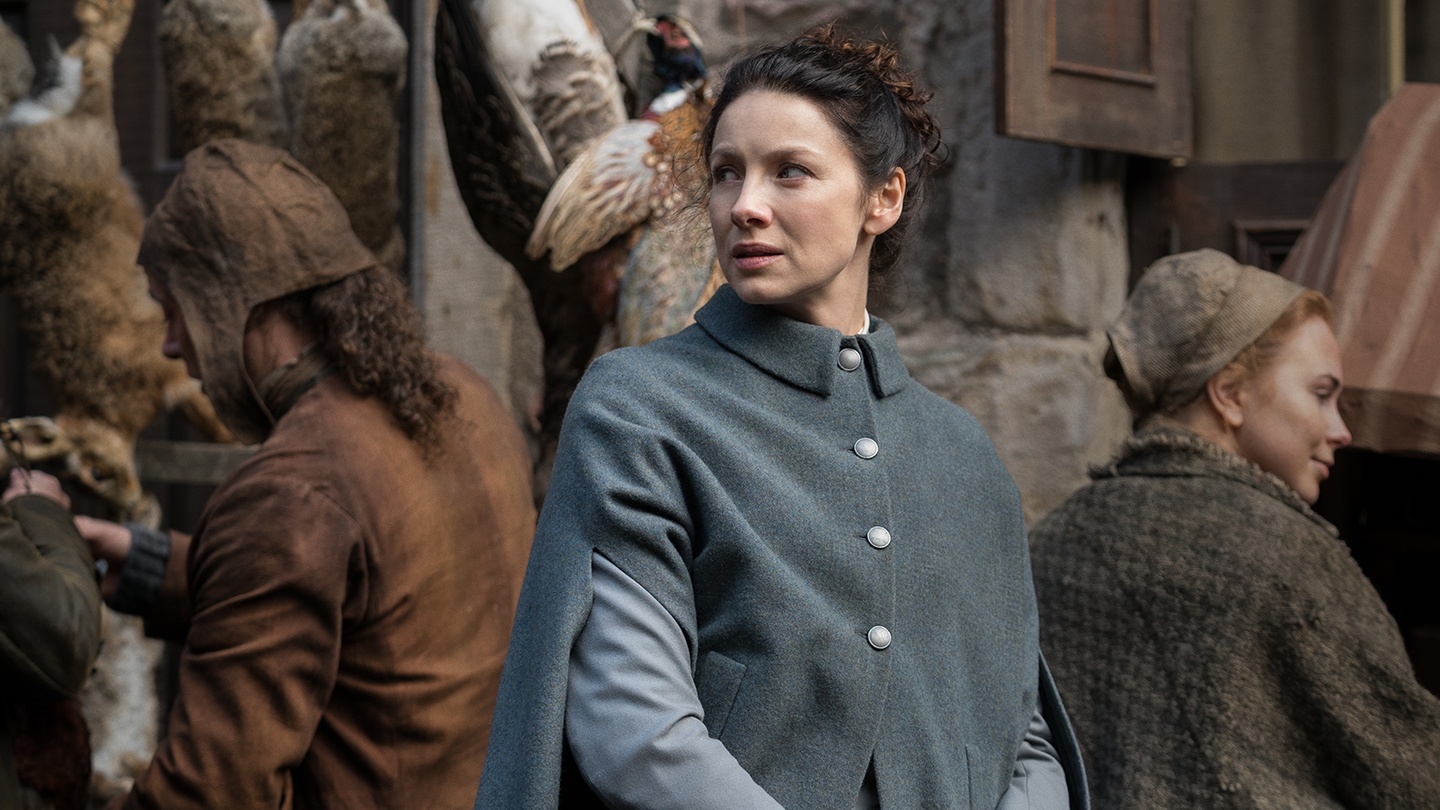 Claire arrives back in time hoping she and Jamie can pick the pieces of their lives back up and start over new, but it’s not going to be easy.  In her absence, Jamie has created a new life for himself filled with new dangers.  Beyond printing seditious materials, which could lose him his life, he’s been smuggling alcohol into Edinburgh, which could get him jailed.  He’s being blackmailed by Sir Perceval, an excise man responsible for taxing liqour, who isn’t happy about the amount Jamie pays him and demands more.  It’s one of Sir Perceval’s men that attacks Claire at the end of last episode, threatening to rape and kill her.  Instead of a simple life with Jamie she was envisioning, she now finds herself fighting for her life.

Luckily Claire has had a lot of experience with a knife, and as the man chokes her she’s able to get her hands on one, slicing into the man as he attacks her.  The man no longer thinks about raping Claire, he wants to kill her.  They struggle and the man trips.  He falls to the ground, striking his head on the hearthstone.  Jamie walks in on a frightened Claire holding a knife over a man gurgling out the remainder of his life on the floor.  Once he realizes who sent the man, Jamie wants nothing more than to see him bleed out.  It’s one less person he has to worry about coming after him again.  Claire sees things entirely differently.  She’s been a surgeon for the past fourteen years and took an oath to heal and care for the sick and wounded.  She wants to save the life of the man who just tried to kill her.  Her actions completely vex Jamie, but he has no choice but to let her try.

Claire’s been a healer of some variety since we first met her in season one, but her skills have advanced well beyond what anyone should be capable of this far back in time.  Normally a man with a head wound like this would die without anybody being able to do anything for him, but Claire knows there’s a swelling on his brain that needs to be relieved.  If she can drill into his skull and relieve the pressure, she may be able to save his life.  The supplies needed for such an operation are not readily available, so she runs to the apothecary to get what she needs to attempt surgery.  While there, she promises to visit a customer who’s sister is sick, after she attends to the gentleman dying in her room.  Jamie knows it’s only a matter of time before Sir Perceval comes looking for his man, so he moves all of the barrels of liquor out of the basement of the brothel just in time before Sir Perceval shows up looking for Jamie’s stash.  He doesn’t find it. 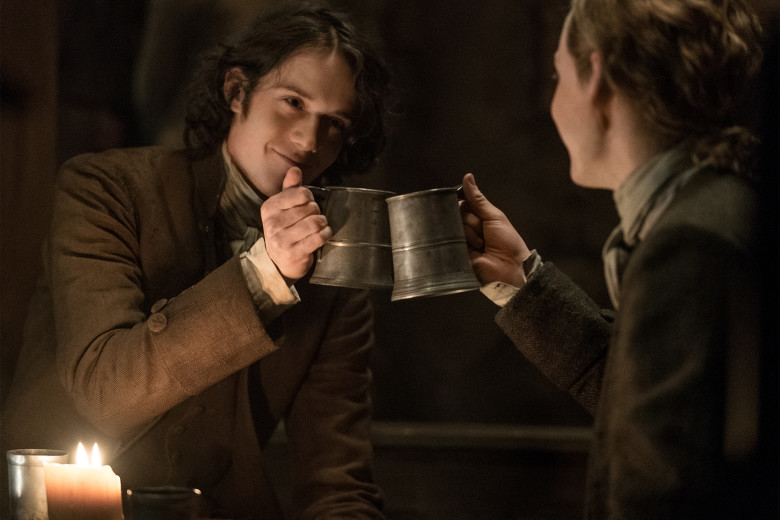 Claire performs brain surgery on the man with the help of Mr. Willoughby, and an ancient looking drilling tool.  She’s able to drill a hole to relieve the pressure on the man’s brain, but is unable to save his life.  Losing a patient is hard on Claire, especially since she knows if she had the modern tools she’s used to working with she’d have been able to save the man’s life.  Jamie doesn’t understand why she’s upset, especially since he believes it’s better for them that this man is dead.  His only worry is about how to get rid of the body.  Their differing views on the man’s life shows a distance between Claire and Jamie.  They’re not on the same page, nor is it likely they would be after so long apart.  it’s one of many things that comes to trouble Claire about Jamie this episode. 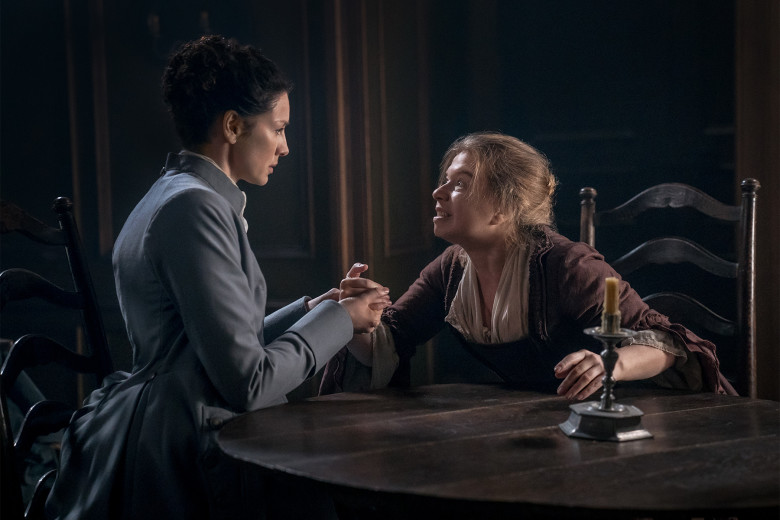 Instead of allowing herself time to be upset about the man’s death, Claire pays a visit to the customer she promised to see.  Claire finds his sister is agitated, babbling nonsense, and has some sort of mental disorder her skills are unable to heal.  It’s not healing the man wants for his sister, it’s a way to subdue her when she gets out of hand.  Usually he uses her state to their financial advantage, claiming his sister is a seer only he can interpret.  They work as fortune tellers, are about to travel to the West Indies, and he’s afraid the seaman, who are superstitious, may throw his sister overboard if there is inclement weather and she’s babbling incoherently.  Claire gives him some recipes for calming the woman down, but there’s not much else she can do.  Even though this scene was short, I believe there’s a lot of significance this brother and sister team will have in the future.  Perhaps Claire’s path will cross these two again before the end of the season.

One of the things Claire finds unsettling about Jamie is his penchant for lying.  She’s aghast when she witnesses Jamie lie to Ian’s face about whether or not Jamie has seen he and Jenny’s son, Young Ian.  After Jamie tells him he hasn’t, Claire confronts him on why he lied about Young Ian.  When Jamie points out she also lied to Ian about where she’s been all these years, Claire tells him that’s different.  Is it though?  The conversation sparks an uneasiness for Claire about what exactly she’s gotten herself into now that she’s back with Jamie, but the heart of this conversation has to wait, as Jamie gets word his print shop is on fire. 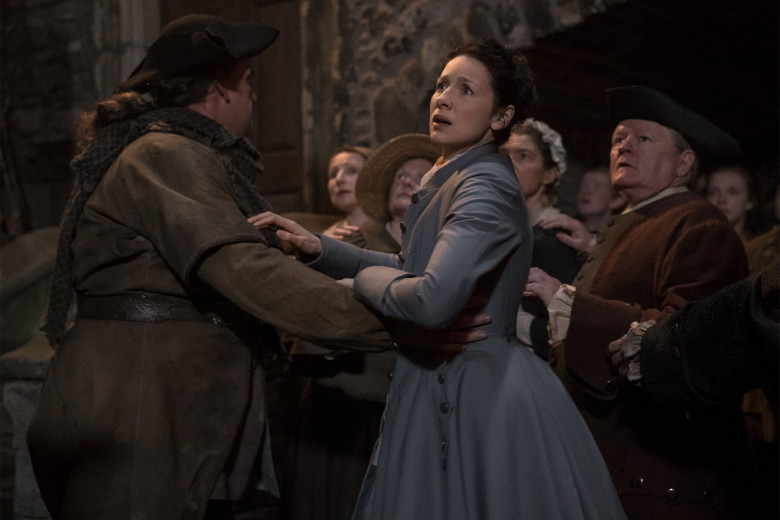 Young Ian has taken a bar maid to the shop to be intimate, but they are interrupted when one  of Sir Perceval’s men breaks in and starts rummaging through everything.  Young Ian sends the woman away, and then confronts the man.  They’re soon scuffling, and in the process of fighting the man discovers Jamie’s hidden cache of seditious pamphlets, something far worse than mere smuggling.  The man attempts to shoot Young Ian, but misses, and a fire breaks out.  When Jamie arrives, the shop is already engulfed in flames.  Jamie knows Young Ian sleeps there, so he rushes into the burning shop and saves Young Ian’s life before the print shop collapses in flames.  With the shop destroyed, proof of Jamie’s sedition in the hands of his enemy, and his smuggling business sidelined, Jamie has no other choice than to flee Edinburgh and head back to Lallybroch with Claire, Young Ian, and Fergus.

Jamie still has a secret he’s kept from Claire that could change everything once she finds out … he’s married.  He’s hoping Ned Gowan can get him out of the marriage contract, but how will Claire react once she finds out he’s been lying to her about this?  Will it be the end of their relationship, or will they find a way to forge on?  With nothing keeping Jamie in Scotland now that all of his businesses are in ruin, will he and Claire head to the New World, or go their seperate ways?