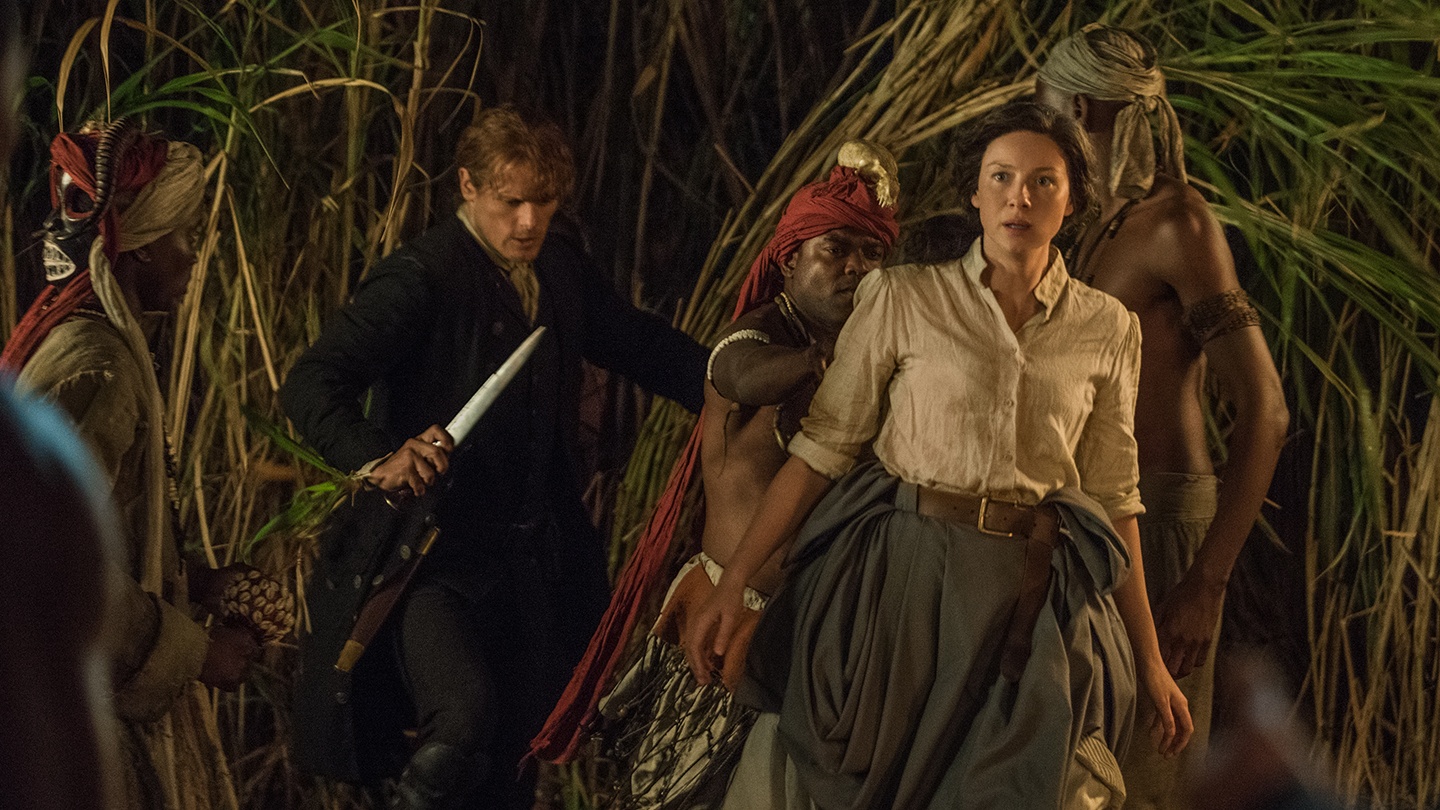 Geillis is a delusional woman, and likely always has been.  If you go back to the first season, it was clear she’d figured out how to travel into the past for a very specific reason. This reason was solidified while Claire and Brianna were in Scotland and stumbled upon Geillis as the speaker of a movement who wanted to restore the independence of Scotland.  She’s been transfixed by the idea she could go back in time and change things, but like Claire, she’s found herself unable to change large historical events, though it doesn’t stop her from trying.  Not only has she used her sexual wiles to influence powerful men, but she’s also taken to fortunetellers and talismans.  The sapphires were important to her, because it was told when the three sapphires were together, they could tell a prophecy about Scotland.

The only reason Margaret and her brother Archibald are in Jamaica is to tell Geillis this prophecy, and also interpret it’s meaning since Margaret’s prophecies come in riddles.  When it comes, it’s confusing.  Archibald makes sense of it to Geillis like this, “A new king will rise in Scotland upon the death of a child that is 200 years old the day of its birth.”  At first Geillis dismisses the prophecy for being ridiculous, but it quickly becomes not so ridiculous once Claire arrives at Geillis’s place looking for Young Ian.  With Jamie arrested by Captain Leonard, Claire searches the slave quarters for Ian, but is captured by Geillis’s muscle, and brought to her moments after Geillis was interrogating Young Ian. 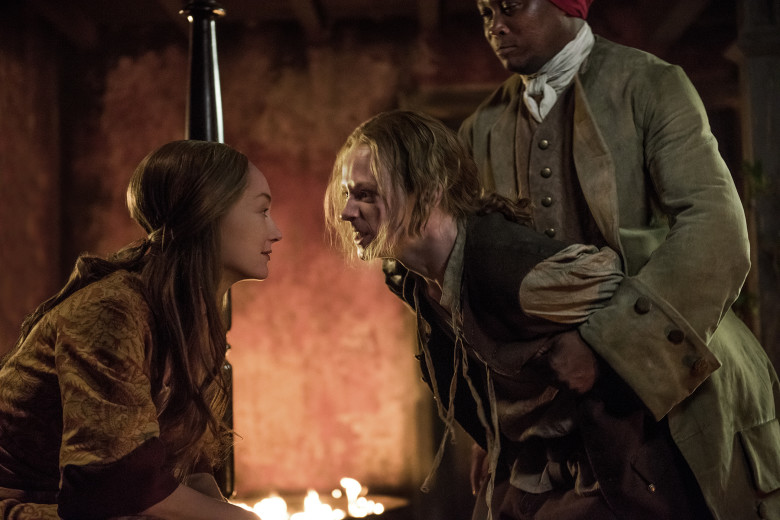 Claire and Geillis have always had a strained relationship.  Geillis knew Claire was a fellow traveler, but also knows Claire is the only other one she’s ever met.  There’s something special about both of these ladies, but their motivations are entirely different.  Geillis is motivated by her fervent desire to see a free Scotland again, and Claire is only motivated by love.  Her first transportation to the past was entirely accidental, whereas Geillis killed her husband as a blood sacrifice to the stones of Cragh Na Dun to allow her passage.  Geillis believes a sacrifice is always needed to go through one of the time travel portals, and doesn’t believe Claire when she tells her she went back to the future with Jamie’s child inside of her.  Claire shows Geillis pictures of Brianna she has on her to prove it.  It dawns on Geillis that the 200 year old child is Claire and Jamie’s daughter Brianna, so she pockets a photo of her.

Geillis acts like she and Claire are friends again, offering Claire her apologies as well as false assertions of help and devotion meant to confuse Claire enough to agree to stay in one of Geillis’s guest rooms for the night, where she’s promptly locked in.  Claire knew something was off about Geillis, and felt it since they were reacquainted at the Governor’s Ball.  If you really look at it, something hasn’t been right in their friendship since the first moment they met.  Geillis has always been suspicious and untrustworthy, especially after it came out she was carrying Dougal’s child.  To complete the prophecy and restore a Scottish king, Geillis is going to attempt to go back to the future using Young Ian as a blood sacrifice at Abandawe Cave, which is portal through time just like Cragh Na Dun, and then kill Brianna.

Unfortunately Jamie has been arrested for the umpteenth time, but Fergus knows Lord John Grey and Jamie are friends, so he rushes to John for help.  John and his military forces intervene and bring Captain Leonard and Jamie to the Governor’s mansion, where John gives the Captain a harsh dressing down before dismissing him and freeing Jamie.  Claire is still a prisoner at Geillis’s place, and sees Young Ian being taken away by Geillis and her manservant.  Claire is unable to find a way out of the locked room.  Jamie breaks in and frees her, and they’re soon on a chase to catch Geillis through the surrounding jungle.  They stumble upon a voodoo ceremony that reminds Claire of the dancing women around Cragh Na Dun she witnessed with Frank so long ago.  She soon realizes Abandawe Cave is another portal, and if she wants to save Brianna and Young Ian, she’ll have to stop Geillis before she goes through it. 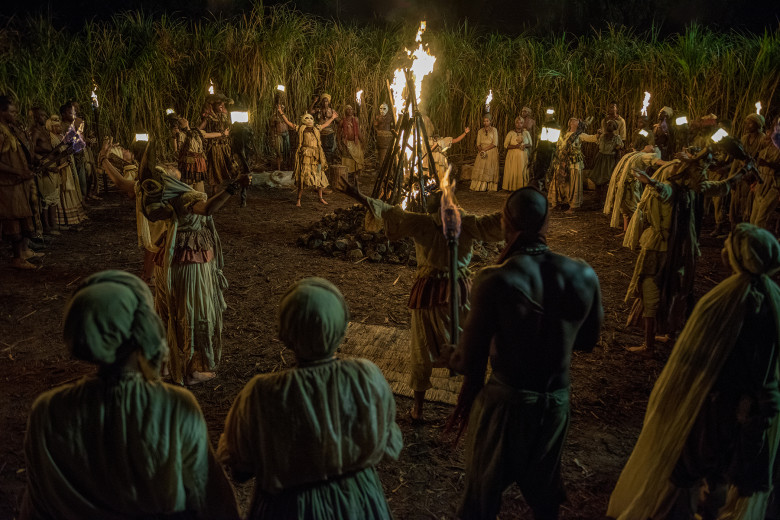 There are a lot of callbacks in this episode of Outlander.  The voodoo ceremony is a call back to the beginning of the series, and it leaves Claire feeling that everything is tied together.  Not only does fate seem to guide her, but also people continually cross her path at both the most opportune and inopportune times.  It’s almost as if she’s a video game character travelling through scripted levels of a game.  There’s some amount of choice and variation within each level, which allows her to alter her immediate present, but not enough to change the outcome of the end game, or story she finds herself inside of.  Clearly love has a big role in Claire finding herself in the past, but beyond her epic love for Jamie, is there a bigger role the universe has in mind for Claire?

The beginning of this episode shows Claire underwater, wrapped up in ship rigging, and seemingly dead.  Her voiceover pronounces the fact that she was dead, much like the first episode of the season shows Jamie in the aftermath of Culloden surrounded by mounds of dead soldiers.  He too voices the fact that he had died.  There are a lot of small moments like this that mirror each other.  When they encounter Margaret and Mr. Willoughby watching the voodoo ceremony, Margaret reads them both by touching their hands, and shows them they both once thought the other had come to visit them in animal form.  Jamie saw the rabbit he believed was Claire while he lay dying at Culloden, and Claire saw a bird at her window in Boston she thought might be Jamie.  These moments came when Claire and Jamie were in troubled circumstances, and they also made both of them feel better.  The love these two share transcends time, but what if it also transcends matter.  Could their strong feelings for each other appear in the others time of need, like a manifestation of their love? 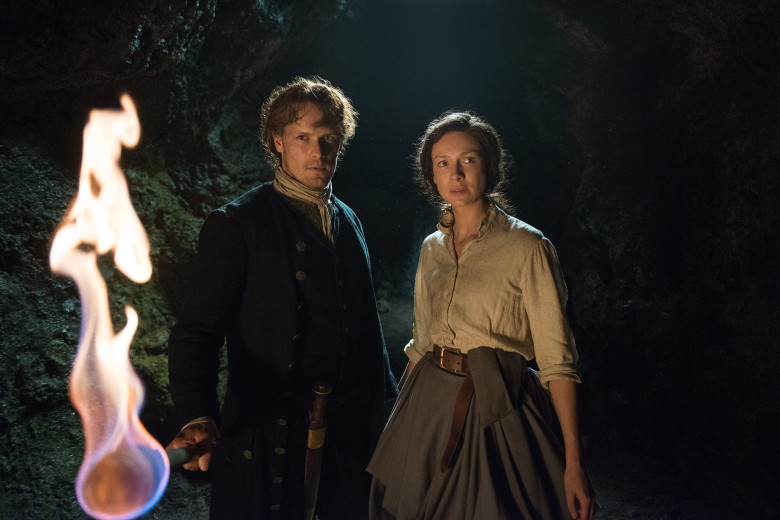 One of the performers in the ceremony point Claire and Jamie to Abandawe Cave, and they arrive just in time to see Geillis performing a spell with Brianna’s picture, while Young Ian is tied up, about to be sacrificed.  Claire realizes a pool inside the cave is the actual portal, and while Jamie fights Geillis’s enormous manservant, Claire confronts Geillis.  Right as Geillis is about to jump into the pool, Claire slashes her neck with a machete, nearly severing Geillis’s head.  As she lay dying, the pool begins to vibrate, almost calling for Claire to enter it again, and she finds herself in a trance.  She’s only stopped by Jamie’s touch.  They’ve rescued Young Ian and saved Brianna, but Claire also realizes this moment has touched her life somewhere else.  In Boston, Joe Abernathy and Claire examined the skeletal remains of a Caucasian woman found in a cave in Jamaica.  Those were Geillis’s bones, and Claire is the person who killed her.  This revelation unnerves her, but there’s also a coincidence that isn’t talked about in the show.  Joe’s last name is Abernathy, and Geillis married a wealthy plantation owner in Jamaica named Abernathy.  Is there a connection between Joe and Geillis or her plantation and Joe’s heritage?

With everyone rescued, and the warrant against Jamie withdrawn, they all head back to Scotland aboard The Artemis.  Claire and Jamie hope for a quiet life when they get back, but we know how things go for these two.  Their brief moment of lovemaking is soon interrupted by a storm.  They encounter a strong hurricane that batters the ship and breaks the mast.  Claire is swept overboard, which brings us back to the first image of the episode of Claire floating, presumably dead.  This time Jamie dives in after her, cuts her loose from the rigging, and pulls her back to safety above water.  For a moment they float in the eye of the hurricane, and then everything goes black.  Jamie awakes on a beach next to Claire, surrounded by the wreckage of The Artemis.  They are found by a family who tells them The Artemis is safely lodged in a mudflat, and they’ve landed in the colony of Georgia. 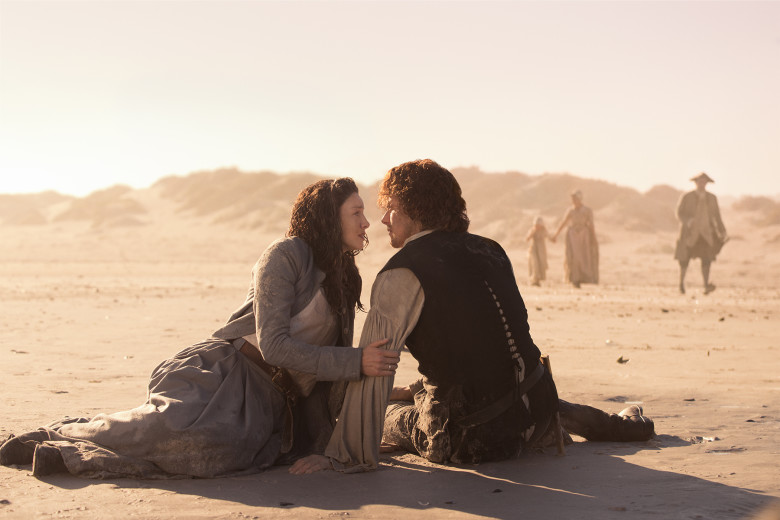 It’s clear in the final shot as the camera pushes inland past Jamie and Claire that their future will lie in America.  In a way this entire season was meant as a pivot from their old lives, to their new life ahead of them in America.  It’s as if this season is a bridge to the new direction Outlander is going.  Even though the season was intended as a way to change directions and set up the rest of the story, it still had wonderful moments.  It isn’t nearly as strong as the first two seasons, but I think in retrospect this season will fit perfectly in the plan of the series without taking anything away from it.  I for one am interested in seeing what part Claire and Jamie will play in the American Revolution and how their lives will change in America.