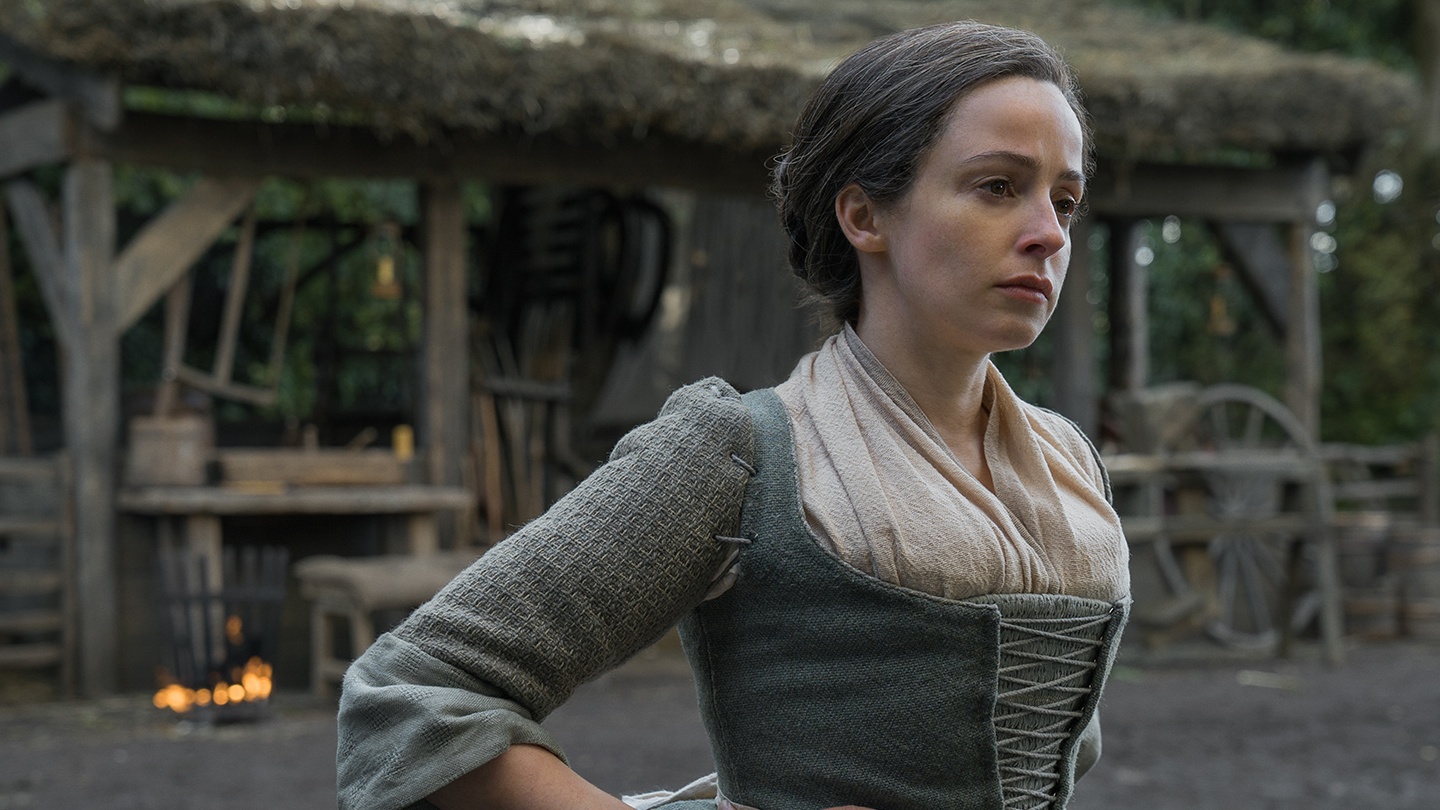 The twenty year gap between the last time Claire and Jamie were together continues to be trying for both of them to come to terms with.  There was a lot of yearning and half living while they were apart, and the solo lives they lived cause troubles and hurt feelings between the two of them as they attempt to get on the same page again.  They’ve both been living with the pain of not having the other person for so long that it’s going to take awhile for them to feel like they know each other once more.  Claire and Jamie are still mysteries to one another.  It’s not as if time stood still for twenty years and they can just jump right back in where they left off.  Both of them wish it were that simple, but it’s going to be hard, and it’s going to hurt until suddenly it isn’t anymore.

Claire really hasn’t had much time to acclimate to the past since she arrived back, which is something she also struggles with.  In Boston she was a respected and talented doctor, which is not something she can really do in Edinburgh, especially given the circumstances she finds Jamie in.  Before she even gets a moment to settle in, she’s attacked, kills someone, Jamie’s print shop burns down, and they are all on the run from representatives of the Crown who were blackmailing Jamie for bootlegging, but now know about the seditious pamphlets he published.  They run to Lallybroch to escape charges of treason, and to figure out what to do next, but they aren’t even given a breather there.  Twenty years hasn’t changed the fact that trouble follows Claire and Jamie wherever they go.

Claire finds that Lallybroch has changed in her absence, and Jenny is not all that happy to see her again.  There’s a coldness in the way she treats Claire, and a skepticism.  Everyone thought she was dead, and the story Jamie tells Jenny about how Claire ended up going to the colonies when she thought Jamie was dead doesn’t ring true.  The Claire she knew before wouldn’t have stopped at anything to find Jamie until she was sure he was dead.  Jenny isn’t just skeptical, she’s angry and hurt as well.  She and Claire were like sisters at one time, and the fact she’s been alive this entire time and didn’t send one single letter to let any of them know what happened to her seems rude.  Jenny is also not pleased with Jamie, since he always comes back to Lallybroch with his tail between his legs when something bad happens to him or he needs something.  It also annoys her that Jamie already has a wife, and now Claire has come back, throwing their lives into chaos. 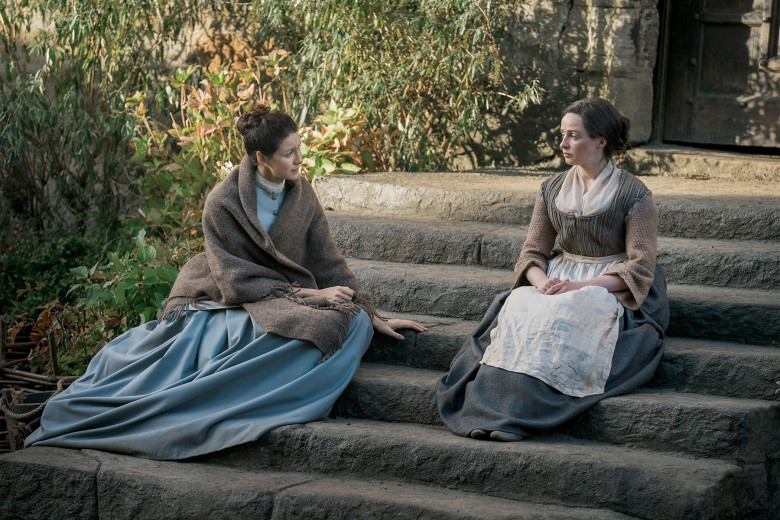 Jamie has been keeping this huge secret from Claire, hoping he can speak to Ned Gowan about it before he has to broach the subject with Claire.  He does have another wife, but there has to be a loophole to get out of his marriage contract since Claire is not dead.  It’s bad enough he’s been keeping a secret like this from Claire, but the longer he hides this information from her, the angrier she’ll become.  His attempt to hold of on telling Claire is thwarted by Jenny, who has her daughter send word to Jamie’s wife that he’s at Lallybroch and to come see him.  Right as he’s in the process of telling Claire, a young girl storms into the room and calls Jamie her father.  She’s confused seeing Jamie with another woman, and turns to her mother.  Jamie’s other wife is none other than Laoghaire, someone Claire has a history of difficulties with.

It’s bad enough Jamie has another wife, but if it were anyone other than Laoghaire it wouldn’t be so bad.  Laoghaire hates Claire and always has.  She blames Claire for stealing Jamie’s affections away from her when Claire first arrived, and to get back at her she had Claire and her friend Geillis arrested as witches.  Claire narrowly escaped with her life, but Geillis was burned at the stake.  Laoghaire wanted Claire dead so many times, that seeing her with Jamie again has stirred up all of her hatred for Claire all over again.  This revelation angers Claire so much that she and Jamie fight.  It starts out physical, she’s really angry, but then the anger turns into passion and they begin having sex, only to be doused with cold water by Jenny.  She tells them to “stop their fighting and rutting like wild beasts …” and by the morning things have changed. 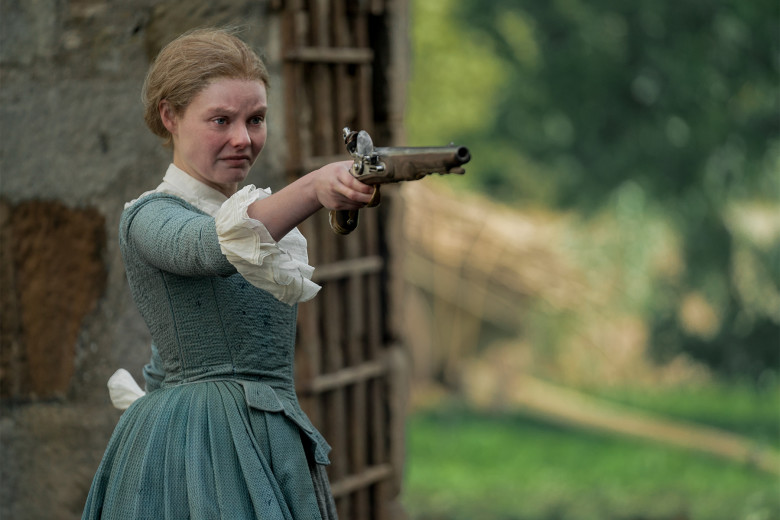 Jamie spent the night sleeping in the stables, and Claire slept in the guest room.  She’s come to believe coming back was a huge mistake, and has packed up her belongings so she can leave.  Jamie tries to stop her at the gates, but she’s really angry.  Their discussion is stopped short by Laoghaire.  She’s arrived to keep Jamie away from Claire, and pulls out a pistol, aiming it at Claire.  Jamie steps in front of Claire as Laoghaire shoots, wounding Jamie in the arm.  Claire takes the moment to knock Laoghaire down, take the pistol away from her, and force her to leave.  There are multiple wounds on Jamie since the pistol was packed with birdshot, and Claire grabs her utensils and pulls out each and every piece of metal out of his arm, including one that was close to an artery.  She’s still upset at him, but allows him to tell her how he ended up marrying Laoghaire.  He met her daughters at a Christmas feast at Lallybroch, and fell in love with them.  Laoghaire was a widow, and Jamie thought marrying her was a chance to have the family he never got to have with Claire.  Things didn’t work out though, and he went to Edinburgh and sent them money, while she stayed back home.  Claire comes to understand why he married Laoghaire, even though it still upsets her.

Ned Gowan arrives to tell them Jamie’s marriage contract to Laoghaire is void due to his previous marriage, but that Laoghaire has filed a civil suit against Jamie looking for a large lump sum of cash followed by yearly payments of support.  In order for her to drop the lawsuit, Jamie needs to find a lot of money quick, and he knows just the place.  When he was a prisoner John Grey had him question and interpret for a man they found wandering the road talking about a treasure.  The man told Jamie a white witch guarded the treasure on Silkie Island, so Jamie escaped from prison and swam out to the island looking for Claire, but only found the treasure, which he put back.  In order to pay off Laoghaire, Claire and Jamie take Young Ian to the island to swim out, grab the treasure, and swim back.  They will then take Young Ian to France, where they will get cash for the treasure, and return to settle their debts.  While they watch Young Ian from a cliff, Claire can’t look Jamie in the eyes.  She’s not sure they belong together any longer, even though Jamie tells her he’ll love her for life. 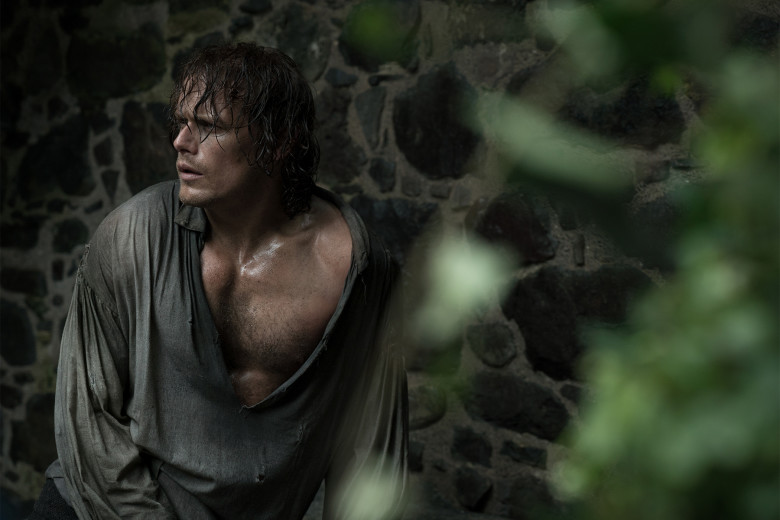 Their conversation is interrupted when they notice a huge ship has thrown anchor near the island, and a rowboat rows away from it toward the island.  Claire and Jamie run to the shore, but it’s too late.  Young Ian and the treasure are grabbed by the men in the boat and taken to the ship.  As it sails away with Young Ian, Claire and Jamie stand by the shore unable to do anything about it.  The camera pulls away from them on shore, heading out to sea, just as the boat begins to sail away.  Claire and Jamie get smaller and smaller as the reality of their helplessness to stop it sinks in.  Who has taken Young Ian and how will Claire and Jamie get him back?  They promised Jenny they would take him to France and return with him, so they can’t come back to Lallybroch without him.  Once again trouble has swept them up in its currents, will they be able to save Young Ian and mend their relationship while staying alive?