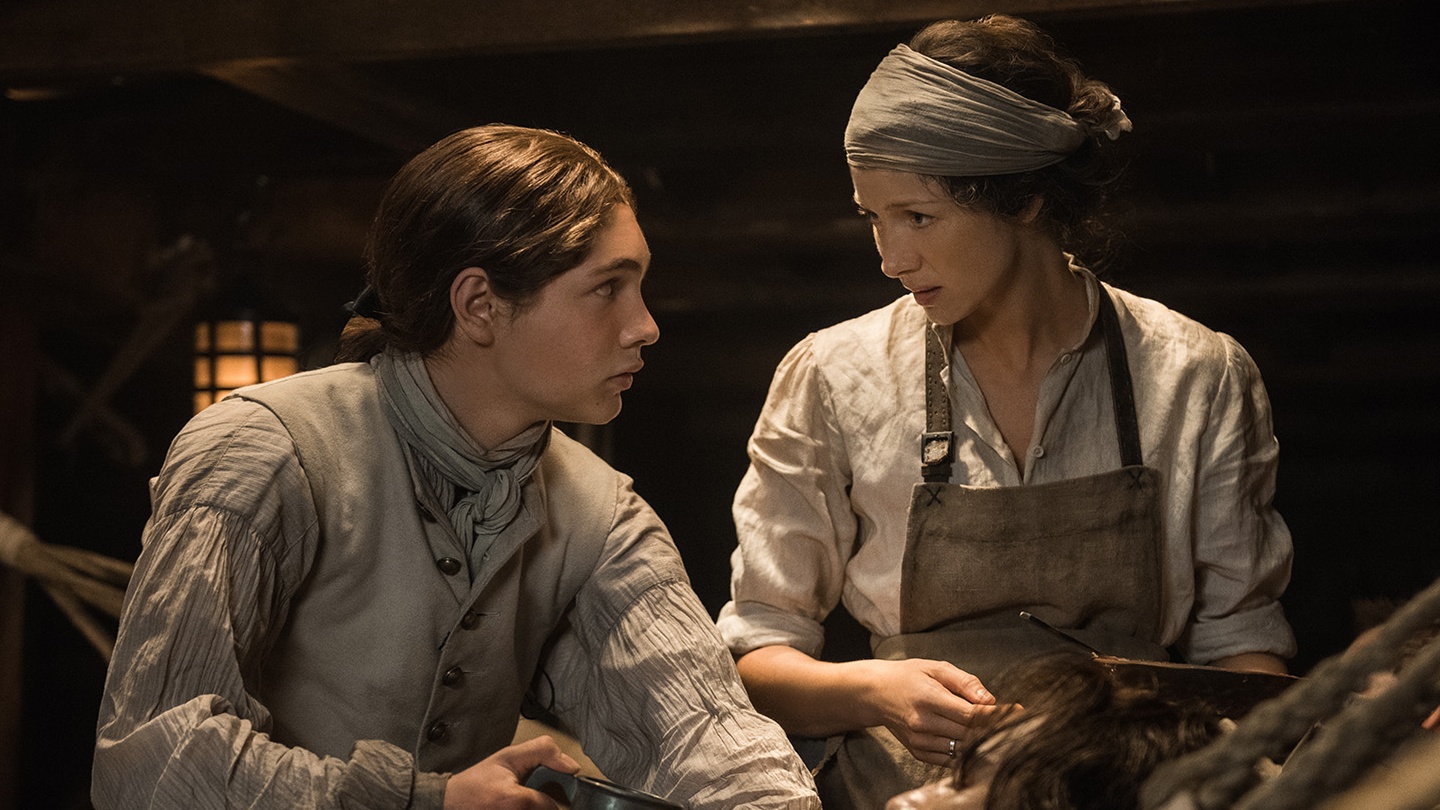 Last episode we saw Claire’s reaction to being whisked away against her will by the captain of The Porpoise.  This time we get Jamie’s point of view.  We witness the moments of idleness while everyone aboard The Artemis waits for Claire to come back, and then the sudden unfurling of The Porpoise’s sails, followed by Jamie’s immediate, angry reaction.  He wants to chase after Claire as fast as The Artemis can go, and without thinking starts giving orders as if he were the captain of the ship.  The problem is he’s not, and although nearly half of the crew are his own loyal men, the other half are loyal to Captain Raines.  The Artemis may be Jaime’s cousin’s ship, but that doesn’t mean anything to Raines, who has Jamie jailed in the belly of the ship in order to stave off the possibility of a mutiny. 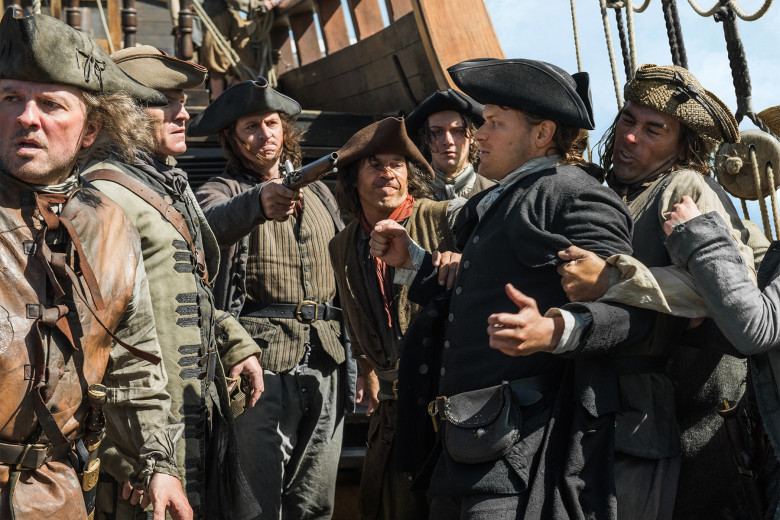 Separation from Claire makes Jamie desperate.  Without the aid of Mr. Willoughby’s acupuncture to keep the seasickness at bay, Jamie is back to puking his guts out in his cell.  Fergus brings Jamie food, and Jamie orders him to steal the keys to his cell in order to let him out so he can start a mutiny and take over the ship.  It’s a crazy idea, especially given he and his men are outnumbered, he’s sick, and he’s never captained a ship before.  Fergus refuses, thinking about what would happen if the mutiny isn’t a success.  Jamie lashes out at Fergus telling him he doesn’t know what real love is, which is why Jamie tells  him he won’t give his blessing to marry Marsali.  Jamie’s cruelty to Fergus is tough and unfair, and his bribing Fergus for his help by promising his blessing puts Fergus in an even more awkward position.  If something went wrong, and Fergus knows pretty well it will, Marsali would be all alone on the ship amongst strangers. The choice comes down to either going with his heart or with what his mind tells him is the best choice, so he refuses to help Jamie escape.  In a way he saves Jamie’s life.  Jamie realizes this after Marsali sweet talks Captain Raines into letting him free. He finally gives the couple his blessing.

Claire has her own struggles as she tries to control the spread of Typhoid fever on The Porpoise.  Her modern knowledge of germs and how they spread are referred to as “A cursed woman’s foolish notions” by the men of the ship, many of which openly mock or are resentful of her orders.  She has the Captain’s grateful ear, and carte blanche to do whatever she deems necessary to stop the sickness.  Getting the men to be sanitary is tough, but slowly things begin to turn around as her rules are set in place.  She’s given an assistant named Elias, a fourteen year old man-child who’s spent his entire life at sea.  He’s also a high ranking officer on the ship.  Elias is in awe of Claire and her abilities, and steps in to protect and defend her whenever her orders are questioned.  He’s the one friend she has on the ship, and doesn’t understand how she can keep so calm under pressure and in the presence of death.  She explains the ability and the necessity of compartmentalizing your feelings in order to do what needs to be done.  It’s how she can help everyone aboard The Porpoise even though they’ve basically kidnapped her. 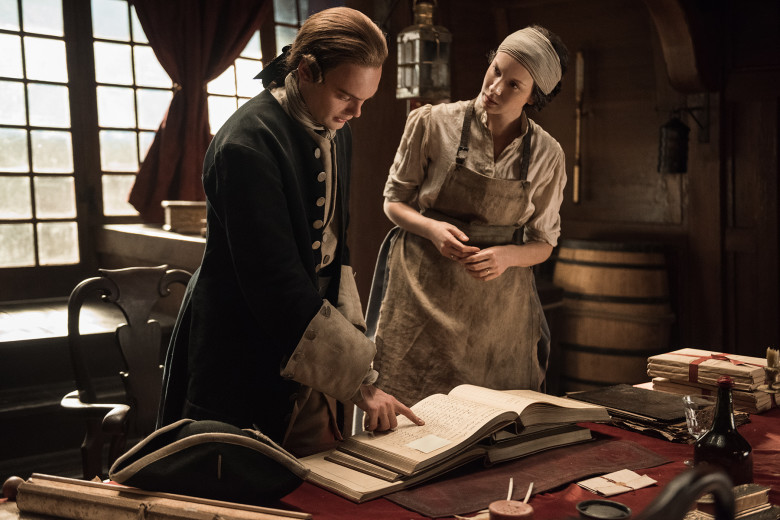 Thankfully, the former surgeon aboard the ship kept a very detailed journal, and Claire’s able to find out where the outbreak started, and who from that group is still alive.  It started amongst a group of carpenters, and when all but one of them died, the living man was reassigned and began working in the kitchen.  He may not be sick, but he carries the virus.  Since he’s working to prepare food alongside the Cook, he’s been spreading the virus and contaminating the others.  Claire has the man quarantined despite the Cook’s angry objections, and soon finds she’s made an enemy of the Cook.  Having all of the rum distilled to make pure alcohol also doesn’t win her many friends, but they need the alcohol to stop the spread of germs.

Claire is summoned when another sailor takes ill.  It’s the husband of Annekje, the woman he takes care of the goats aboard.  Her husband has drunk so much that he has alcohol poisoning. It’s the alcohol meant for killing germs.  Claire is so upset that she lets off a string of profanities that impresses and embarrasses Elias and the other men around her.  The spread of sickness is slowing, but there are many men still dying, including one of Elias’s friends.  To prepare for the burial at sea, a friend is supposed to put the last stitch of the burial shroud through the nose of the dead person.  Claire watches Elias do it to his friend.  The burial at sea is a solemn, emotional ceremony, and one Claire will have to repeat later in the episode when Elias falls prey to Typhoid and dies.  She puts the last stitch through Elias, and all the walls of her compartmentalization fall down.  Tears and sadness wash over her as she says goodbye to Elias, the only person on the boat she’s truly cared for. 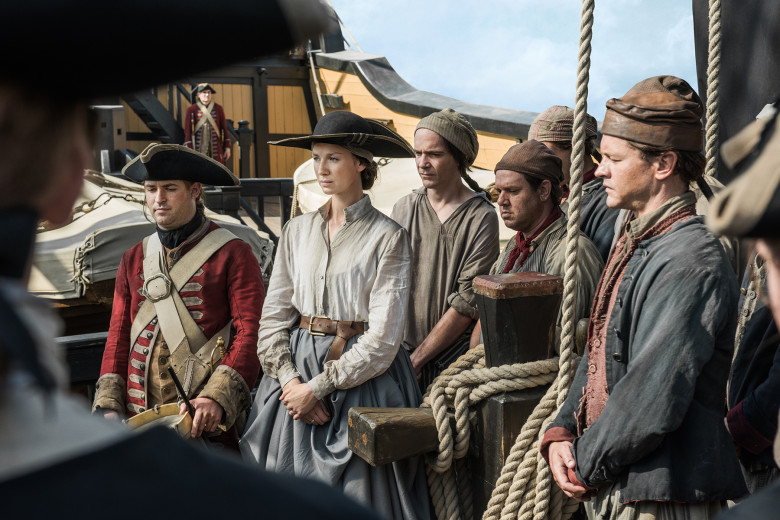 While Claire’s in the belly of the ship looking after the men, she notices a Portuguese flag stowed amongst the goods on board, and soon realizes The Porpoise may have boarded The Bruja, the ship Young Ian is on.  She goes to ask the Captain about the flag, but when he isn’t there, she looks into his logbook and finds it wasn’t the right ship.  Something else catches her eye in the logbook: someone recognized Jamie, and the Captain is going to have him arrested for murder the minute they reach Jamaica.  The Cook catches Claire reading the Captain’s book, and threatens her.  Claire tells him she has the Captain’s ear, and if he doesn’t leave her alone she’ll tell the Captain he tried to rape her.  The threat is enough to get the Cook to back off, but now she has to figure out how to warn Jamie, or escape so she won’t be used as bait to capture him.

A man named Mr. Tompkins is the person who recognized Jamie.  Claire tracks him down and speaks to him.  He’s none other than Sir Percival’s man responsible for burning down Jamie’s print shop.  Mr. Tompkins has somehow been pressed into service on this ship after finding the man Claire killed hidden in a cask of creme de menthe.  The murder has been wrongfully attributed it to Jamie.  This is the first time in all of Outlander where a connection between characters has been too convenient and unbelievable for me to swallow. The chances of this man being on this ship and recognizing Jamie are too slim for me not to think of it as anything but a ridiculous coincidence and lazy writing.  I’m not sure if this was Gabaldon’s work or if it was the Outlander writers, but it’s just too much to take.  I understand it’s necessary for someone from their past to recognize Jamie for crimes that took place while he was going by the name Malcolm Mackenzie, but it still just doesn’t sit right with me.

Claire’s work on The Porpoise succeeds, and soon the illness has stopped spreading.  Her problem is now how to get off of the boat without allowing herself to be used as bait to capture Jamie.  Claire has no one to talk to, so she unburdens herself on Annekje, who speaks little English and makes a cryptic comment about helping Claire because her goats need grass. It isn’t until they stop at Grand Turks island and disembark to feed the goats, that Claire understands Annekje’s meaning.  Claire makes a run for it, and just as it seems she’s gotten away, the Captain catches her.  He apologizes to her for what he is duty bound to report about her husband, but tells her there’s no way around it.  Jamie will be arrested and hanged for his crimes.  Claire’s escape is thwarted, but as they sail away from the island, Annekje urges Claire to jump overboard and cling to a small floating raft Annekje’s made for her.  The tide will take her back to the island, and the money Annekje gives her will allow her to hire a boat to help her reach her husband.  She jumps overboard that night into the dark waters of the Caribbean, hoping to save Jamie’s life.