Though there are moments in this season of Outlander where the excitement of the story comes into the foreground, and it should since Claire and Jamie embarked on a new life in the New World, the majority of the season is bogged down by Brianna’s storyline, and that’s unfortunate.

The feeling that something is off with season four of Outlander has been undeniable for a long time, but it’s been hard to put a finger on what made the majority of episodes so dull this time around, until Brianna’s storyline took over front and center. I’ve talked in the past about Sophie Skelton’s inability to carry the weight of the show on her shoulders, and it becomes glaringly obvious every time her storyline is up front and center in the majority of an episode. Either Brianna’s story or Skelton’s portrayal of Brianna’s story is unable to match the chemistry and the electricity of the Claire and Jamie-centric storylines that came before. Hell, there’s way more excitement with Roger’s story arc this season than with Brianna’s, and yes I know she’s pregnant and can’t go on adventures, but even her drawing room adventures at Aunt Jocasta’s are about as exciting as a deflated balloon. 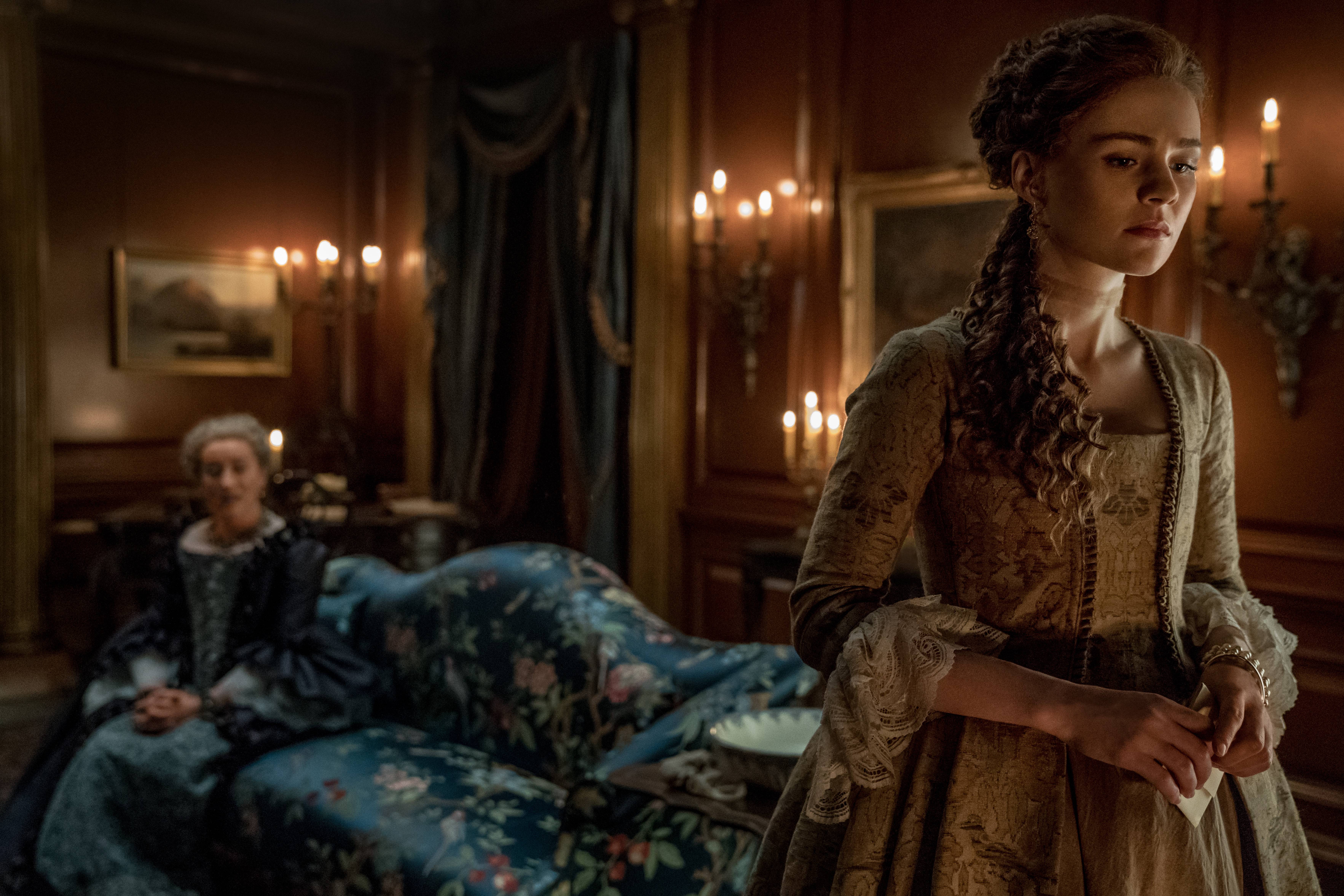 This predicament becomes even more problematic if future seasons shift away from Claire and Jamie, and become more about Brianna and Roger. Though Skelton is surrounded by a superb cast and crew, the believability of her performance, and the emotional resonance of her delivery just isn’t there like it is for Caitriona Balfe as Claire. The only time Brianna has had some emotional heft in a scene was when she yelled at Jamie that he’s not allowed to be angrier than she is when he found out about Stephen Bonnet’s raping of Brianna last episode. Other than that, it always feels like Skelton delivers her lines as if she’s reading them off of cue cards. It’s unfortunate that her delivery is so flat and wooden, because she looks perfect for the role of Claire and Jamie’s child. Hopefully these issues can be remedied as the show moves forward, but with only two episodes left in the season, it’s too late for Outlander to find its footing this season.

The episode starts off with Roger safely back in the future enjoying the modern conveniences of a shower. The moment is brief, and soon we find it was just a daydream of Roger’s. The Mohawk have recaptured him. It begs the question (that goes unanswered this episode) as to how he was recaptured, and what happened to him at the stone while he debated whether or not to pass through it. It seems like a missed opportunity, but hopefully it’s something that’ll be addressed before the season is over. With such a huge head start, there’s no way Claire, Jamie, and Young Ian will catch up. Their only hope is that when they reach the Mohawk village of Shadow Lake they won’t be attacked, and will find Roger alive and well. They have deep worries about this after finding the remains of one of Roger’s fellow captives. 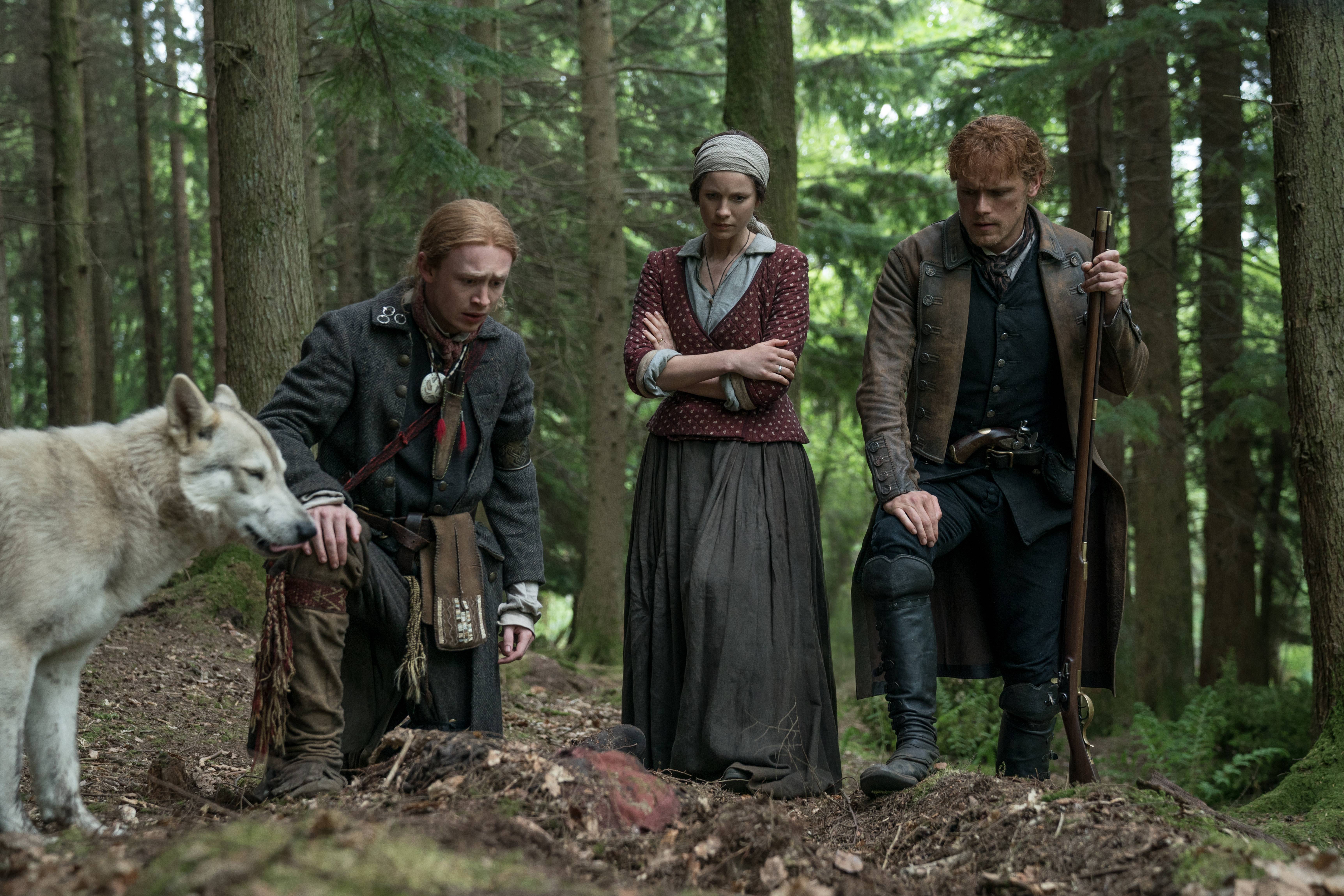 While Claire, Jamie, and Young Ian follow Roger to bring him back to Brianna and right the wrong Jamie and Young Ian did, Brianna is stuck bidding her time until her child is born at Aunt Jocasta’s. It would be one thing if Jocasta left her alone while she waits for Roger, but she insists to Brianna that Roger won’t return, and that she needs to find a husband before the baby is born or it’ll ruin Brianna’s reputation (something that shouldn’t matter since Brianna isn’t planning on staying in the past long term). Jocasta finds Brianna to be just as head strong and opinionated as Claire, but her love for Jamie pushes her to do what she believes to be the best for Brianna’s future. The party Jocasta throws for Brianna is like a revolutionary era version of the dating game, with all of the suitors jockeying for Brianna’s attention. The highlight of the group is an appearance by Peter Jackson’s The Lord of the Rings star Billy Boyd as suitor Gerald Forbes, a man who is desperate to ask Brianna for her hand in marriage. The late arrival of Lord John Grey takes the wind out of all of these men’s sails. 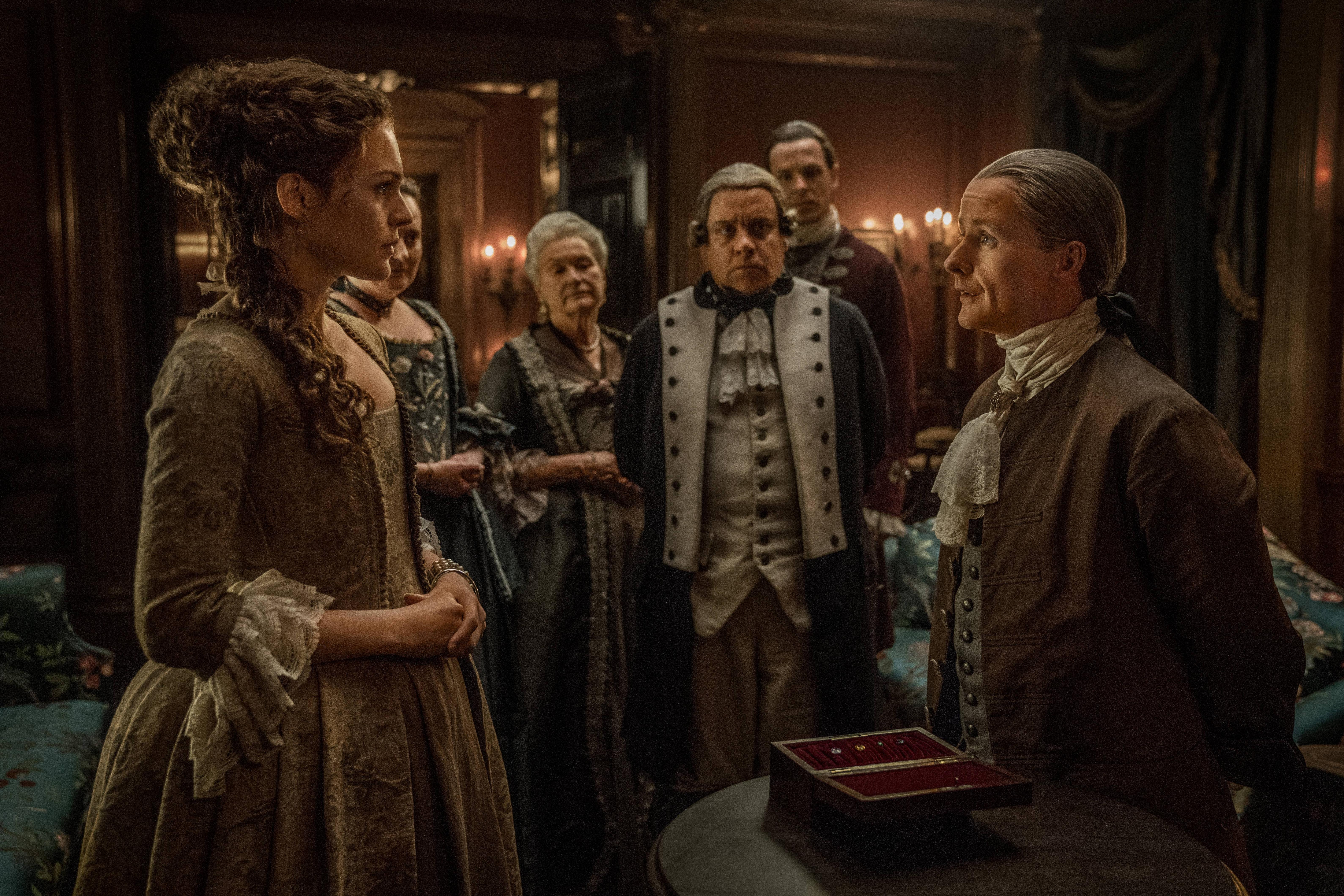 Jamie asked him to look in on Brianna and deliver a letter to her, but Grey has no idea why, and is unaware of her pregnancy at first. Though Brianna doesn’t want to marry any of these men, she uses her awkward discovery of Grey’s homosexuality against him as blackmail to get him to propose to her, and save her from her fate. It’s a dirty trick that she eventually apologizes for, but it feels desperate and is a dislikable thing to do. Grey saves Brianna at the last minute from a proposal by Billy Boyd’s character, and announces their engagement. Grey performs this grand gesture purely out of his love for Jamie. It’s a very nice thing for him to do, especially after Brianna’s distasteful threats, but it’s also a little sad. Lord John Grey has now become the caretaker of all of Jamie’s children, which has to be a constant reminder of the love he’ll never get to experience with Jamie.

Claire and Jamie’s relationship is still in an awkward place, but Young Ian pushes Claire to mend fences with Jamie. They do apologize to each other, but Claire still has no idea about Jamie’s plans for Stephen Bonnet. When she finds out will she be pleased, or angry with him anew? With Fergus’s help, Murtagh captures Bonnet, but is soon captured himself by the local militia who find him with Bonnet and arrest them both. Murtagh is a wanted man, which means he faces the gallows just like Bonnet. Will he hang fulfilling a promise to Jamie? When Roger arrives at the Mohawk village, he’s run through a violent gauntlet of beatings. It’s unclear if this is a hazing ceremony, or just a chance for the tribe to terrorize Roger. Will he survive this experience and be embraced by the tribe as Young Ian suggested, or will he be their slave and treated roughly by everyone? Will Claire, Jamie, and Young Ian rescue him, or find themselves in a peril equal to his own? We’ll hopefully have answers in the final two episodes of the season. 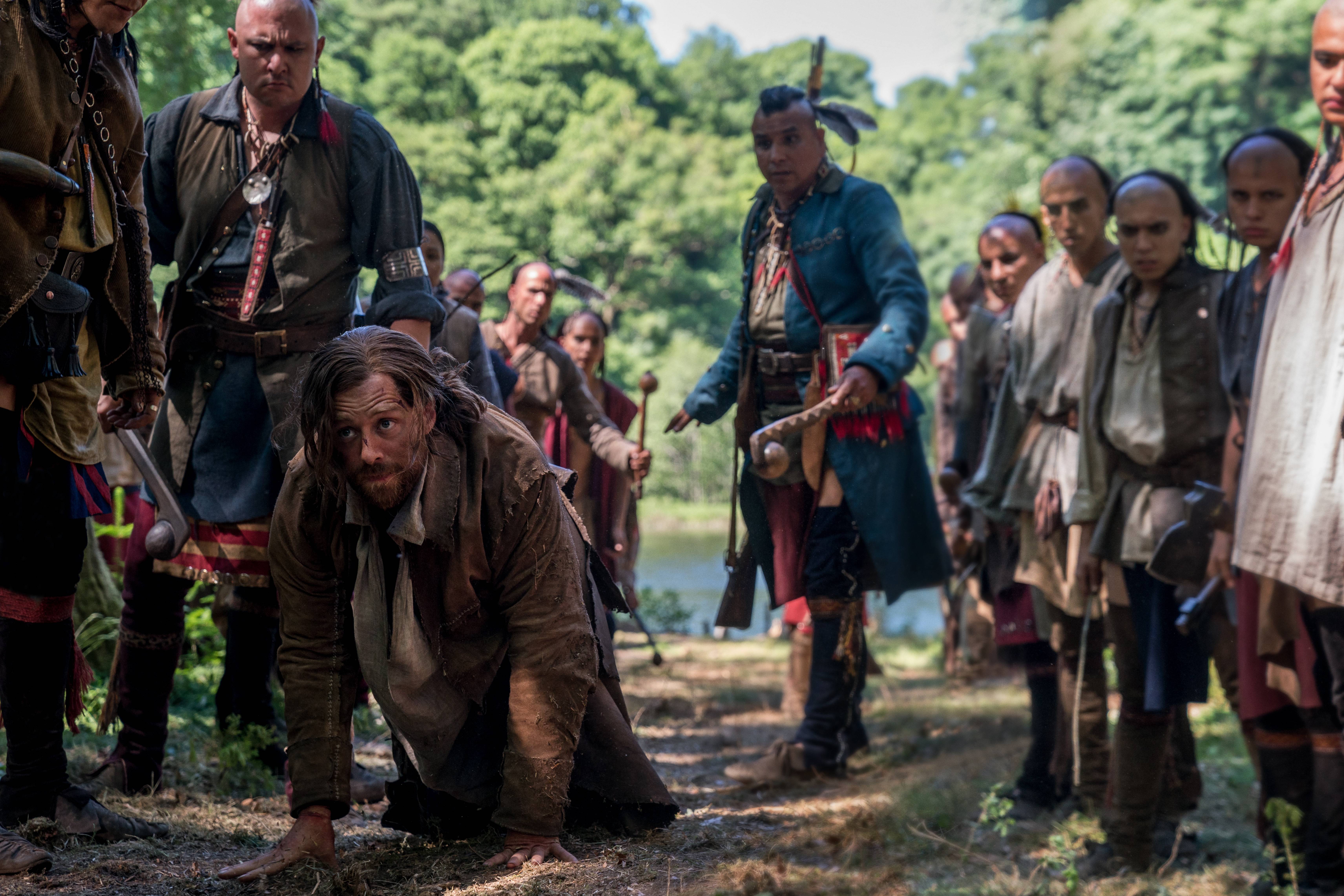