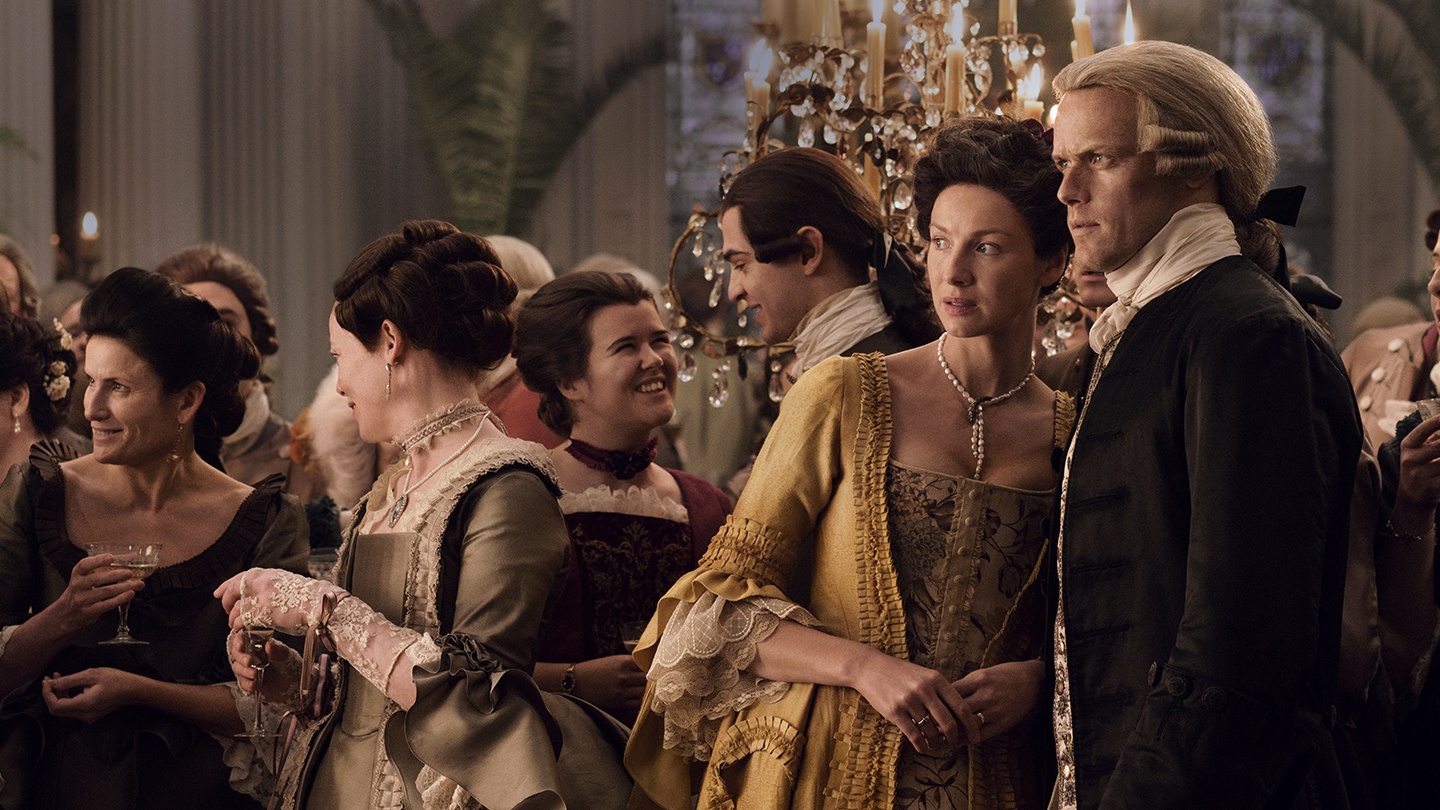 This penultimate episode of this season starts out from Young Ian’s point of view after being kidnapped by the sailors of The Bruja.  Instead of giving us all of the ins and outs of his experiences, we’re given an abridged version that fits snugly into the teaser before the credits sequence.  In it, the name The Bakra keeps coming up again and again.  This Bakra is both in charge of The Bruja, as well as someone the other young men Ian meets in the dungeon are fearful of.  Once someone is taken to the Bakra they’re never seen again, so when it’s Young Ian’s turn to go, he’s nervous and afraid.  In the biggest revelation of the season, the Bakra turns out to be Geillis!  She’s somehow alive, and clearly a very powerful person on the island of Jamaica. 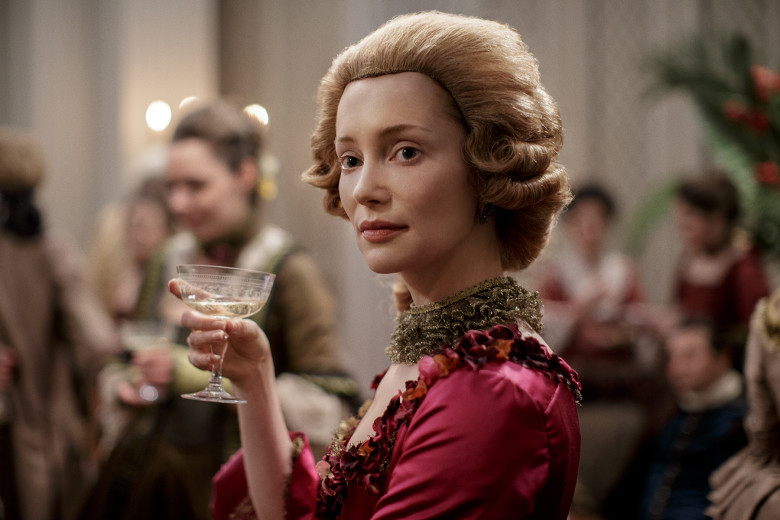 Young Ian first encounters Geillis when he’s brought to her bedroom, where she’s bathing in goat’s blood.  She emerges from the bath completely naked and covered in blood.  For Young Ian it’s both frightening and erotic.  She flaunts her body in front of the young man, seemingly trying to seduce him, but she’s after something else as well.  She feeds Young Ian and gives him tea, but there’s something about the tea that makes Young Ian unable to hide the truth.  Geillis knew about the treasure on Silkie Island.  It seems Dougal placed it there, and in the treasure were three sapphires that could be used by a seer to tell a prophecy about when Scotland will be free and independent again.  She has two of the stones, and wants to know what happened to the third.  Young Ian cannot help himself and tells her Jamie may know where it is, and that he’s coming to rescue him.  This news delights her.  She’s interested in having sex with Young Ian, who likely can’t help himself while under her spell.

Claire and Jamie arrive on the island, and it seems they’ve gotten to Jamaica before The Porpoise.  This gives them a small window of time to find Young Ian and leave before Jamie can be arrested.  Before they get very far, they run into Jamie’s cousin’s employee who helps them find lodging and invites them to the Governor’s Ball later in the evening.  They first search for Young Ian in the slave market, which is a gut punch of reality for Claire.  Young Ian is nowhere to be found, but Claire ends up witnessing the degrading and humiliating way the auctioneers treat the slaves being bid on.  When an owner exhibits a slave’s penis and attempts to make it grow so the ladies and gentlemen of the crowd can see his virility, Claire can’t contain herself and attacks the man doing it.  Her attack sends the crowd into a frenzy, and soon a melee takes place.  Jamie ends up buying the slave to appease the owner.  Claire and Jamie intend to set the man, Temeraine, free when the opportunity presents itself, but for the time being Temeraine will be instrumental in helping Claire and Jamie find Young Ian by talking to other slaves at the Governor’s Ball. 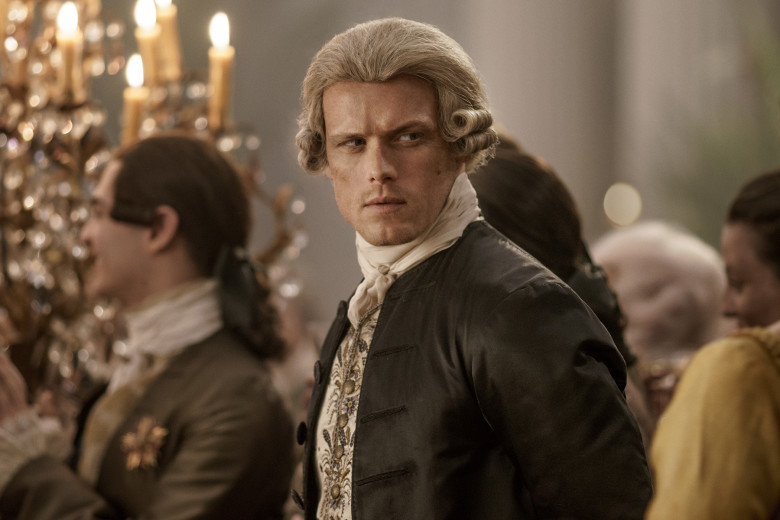 The entire incident with the slave market and Temeraine is a missed opportunity to confront the brutalities of slavery.  Sure, Claire see’s a woman being branded, and Temeraine being humiliated and treated as a nonperson, but Outlander skims over the atrocities and jumps right back into the story as if slavery is something it grudgingly must deal with before getting back to the main narrative.  In a way Temeraine is merely a prop Claire and Jamie use to help them find Young Ian, since Temeraine would be able to speak to the other slaves at the ball and find out information about Young Ian easier than they would.  Slavery and the living conditions of the enslaved are only given a superficial disdain in Outlander, and its problem is merely glossed over in the episode.  By the end they let Temeraine free to live with runaway slaves in the mountains, and the moral problem is quickly out of sight, and out of mind.  It’s a disappointing stumble for a show that’s usually had a very enlightening approach to dealing with the historical problems faced by both women and the other on Outlander.

At the ball Claire runs into Archibald, the man who’s sister Margaret was the fortuneteller she helped in Edinburgh.  It was clear at the time that these two would be integral to the story, and here they are in the employ of Geillis to help deliver the prophecy of Scotland once Geillis finds the third sapphire.  Claire, Jamie, Fergus, Marsali, and Willoughby are in line to meet the Governor, and to Jamie’s surprise it turns out to be Lord John Grey.  John is delighted to see Jamie, but there’s a tension between the two men Claire immediately picks up on, as well as a jealousy of Claire when John finds out she’s the lost wife Jamie spoke so fondly of.  John wears the sapphire Jamie gave him on his waistcoat in an ornate setting to remind him of their friendship, as well as John’s unrequited love for Jamie.  Claire and John’s private conversation dances around the obvious tension, but says everything needed using only insinuations.  Their conversation is interrupted by a glimpse of Geillis, and Claire excuses herself to chase after the apparition of her former friend. 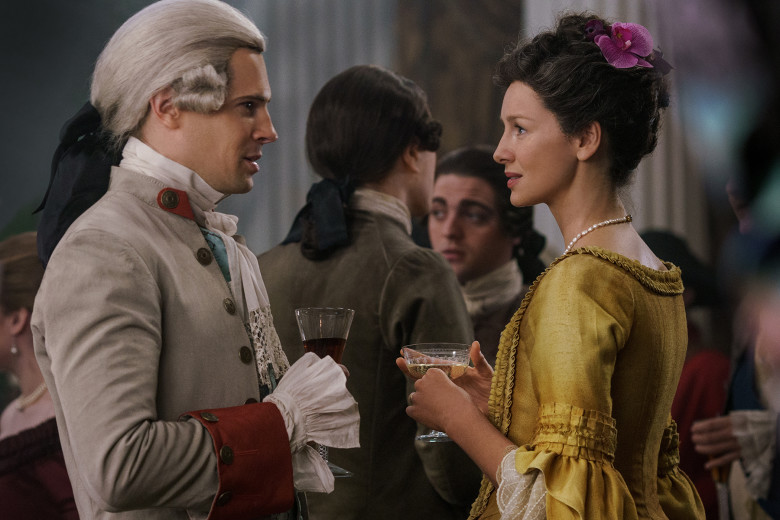 Geillis surprises Claire and quotes Casablanca, “Of all the gin joints in the world…”  They catch up, and Claire learns Geillis escaped her fate with the help of Dougal, arrived in Jamaica after hearing of his death at Culloden, and married a wealthy plantation owner who died and left her everything.  She’s now known as Mistress Abernathy now.  Despite her friendliness there’s something off about Geillis.  These two women are alike, but yet completely different at the same time.  What is it about them that allows them to travel through time to come here?  Are there more like them, or are they opposite forces in contention?  Geillis is friendly to Claire, and offers to help her find Young Ian, even though she has him captive.  When the two ladies go to find Jamie, he’s talking to John, and Geillis immediately notices the sapphire John wears.  She connives a way to get him to have his fortune told by Margaret, who has the other two sapphires in her hand.  When she touches the third she tells the prophecy of Scotland, and it’s a bizarre one both Geillis and Archibald will have to decipher later.

Fergus and Marsali see the Captain of The Porpoise arrive with soldiers, and warn Jamie. Temeraine has found out Young Ian was taken to the Abernathy plantation, so they all flee the party in a coach to go to Geillis’s plantation to save Young Ian, only the soldiers catch up to them and arrest Jamie.  I would wager once the Captain brings the charges to John Grey about Jamie, John lets Jamie go.  Young Ian is in danger.  It’s said that once someone goes to see the Bakra they are never seen again, so it seems Geillis is bringing these young men to the Abandawe Cave as either a sacrifice, much like her goat’s blood bath, or she’s sending them through time since the cave likely acts like a portal much like Craigh Na Dun.  Can Claire get to Young Ian before Geillis either kills him or makes him disappear?  If they save Young Ian, they won’t be able to stay in Jamaica or go back to Scotland.  Will they flee to the colonies to start a new life?  We’ll find out in the season finale next week.