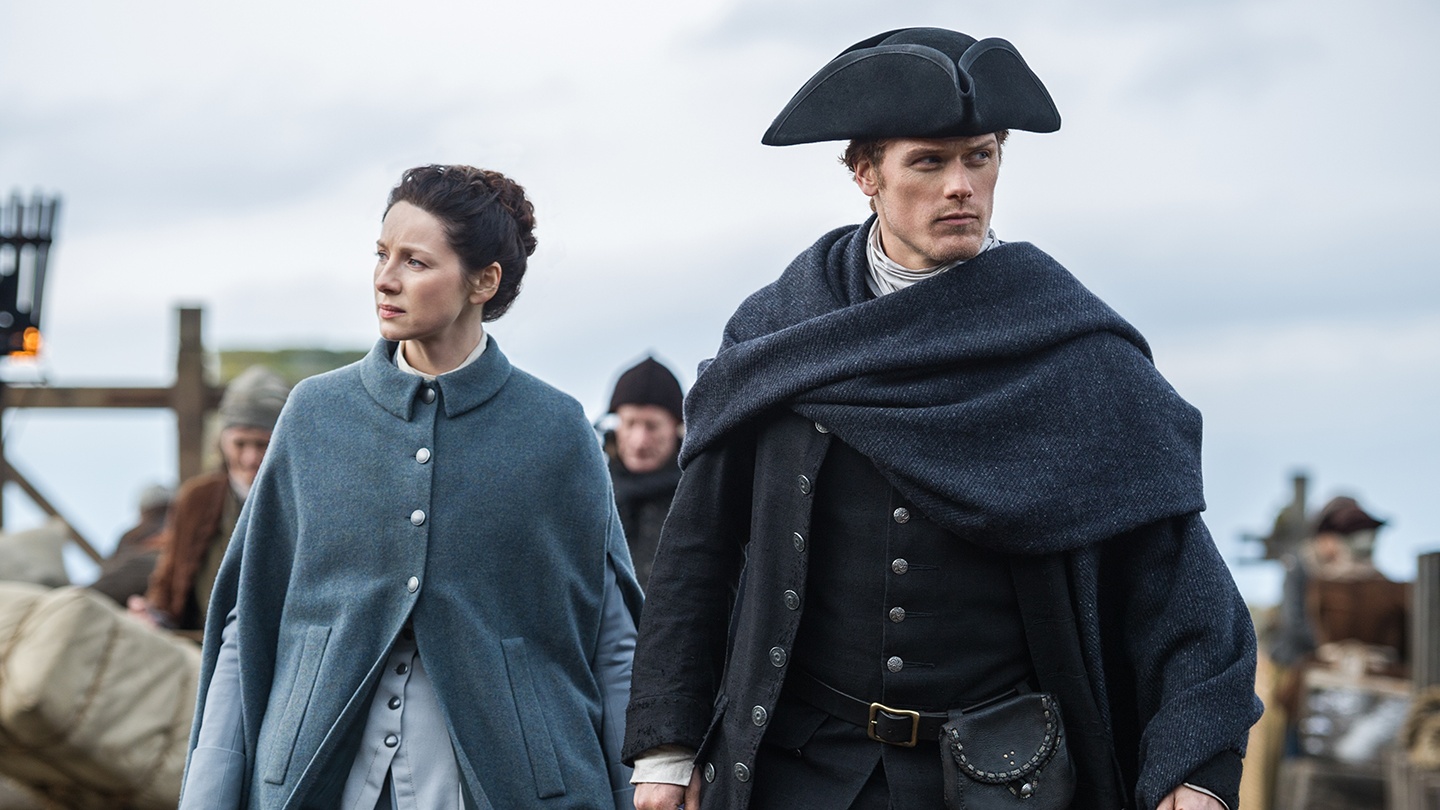 The title of this episode is “The Doldrums” and beyond describing a problem at sea, it’s also a fair definition of what many of the characters are feeling in their lives at this moment.  There hasn’t been much time for Claire and Jamie to reacclimate to each other since she’s arrived back.  Instead they’ve been swept along by tragedy and adventure, burdened with a twenty year gap as well as the life and secrets that filled their time apart.  It’s clear they still love each other very strongly, but the fear they don’t belong together any longer still weighs heavy on Claire.  Instead of dealing with these feelings, the abduction of Young Ian leaves Claire and Jamie racing to save the boys life. 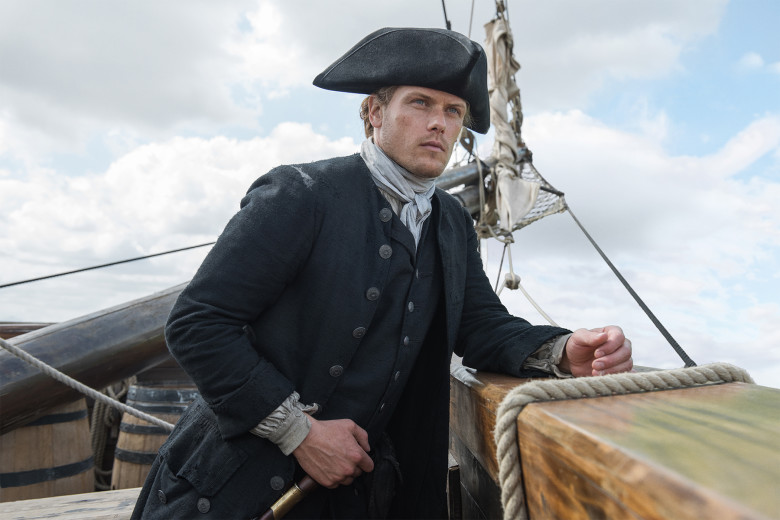 Everything is thrown for a loop with the disappearance of Young Ian.  Not only is Jenny going to kill Jamie for putting her son in harms way, but the treasure meant to pay of Laoghaire and get her out of Claire and Jamie’s life for good is taken too.  There’s a good chance Claire and Jamie can save Young Ian before he’s sold as a slave, but the treasure is probably gone forever.  This puts Jamie in a weird legal predicament with Laoghaire if and when he arrives back to Scotland.  In order to pay her off, nullify their marriage, and drop legal proceedings against him, he was supposed to bring the Silkie Island treasure to France, trade it for currency, and use it to break the shackles Laoghaire put on Claire and Jamie’s renewed relationship.  It’s unclear what happens now.

Their first priority is following the ship Young Ian has been taken on, which turns out to be a Portuguese ship registered in Jamaica.  Jamie is able to get himself and Claire taken on a ship, the Artemis, as well as Willoughby, Fergus, and several friends from his days in prison.  They head out to sea in pursuit of the other ship, with Claire acting as the ship’s doctor.  Fergus drops a huge surprise on both Claire and Jamie when he reveals that he’s brought along one of Laoghaire’s daughters, Marsali, who he’s married without telling anyone.  Jamie sees Marsali as a daughter, and is upset.  Marsali shares both her mother’s and Jamie’s stubbornness.  When he demands she go back to Scotland and says he won’t allow the marriage, she’s able to make a threat he knows she means.  Marsali gets her way for now, but Jamie still doesn’t condone the marriage, though there may be nothing he can do to stop it. 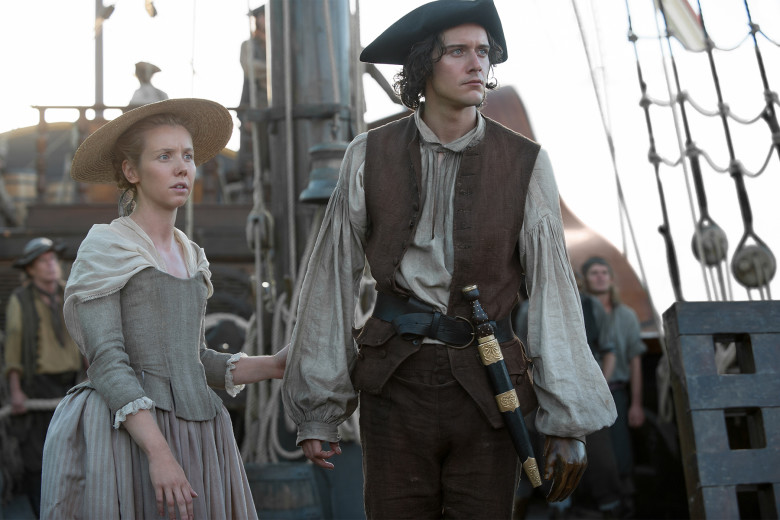 Claire’s talents as a healer are needed almost immediately since Jamie comes down with the worst case of seasickness ever.  While he wretches his guts out, drinking ginger tea she’s made to calm his sickness, she dines with the ship’s captain.  They talk about superstitions at sea. and how a woman is considered bad luck on a ship.  Claire doesn’t understand why he allows the superstitions to continue, but she doesn’t realize these strange superstitions help keep order and calm on a ship.  They are a form of unwritten rules or laws the seamen live by.  Touching the horseshoe as you board the ship doesn’t really bring good luck, but the men believe it does, and that’s what’s important.  Anything thought of bad luck weighs heavily on the crew, and the captain allows it so the men don’t mutiny.  Claire has had to deal with superstitions ever since she came to Scotland, whether it was being accused of being a witch for her healing knowledge, wrong medical assumptions blamed on fairies, or now being bad luck on the ship.  She doesn’t have to believe or accept the superstitions, but she does have to live with them.

The ship comes to a sudden and abrupt stop as the wind dies down completely.  The Artemis is stuck in the doldrums, a windless dead space in the ocean.  It’s not an uncommon thing to have happen, but as the days stretch to weeks without wind, the crew gets restless with talk of bad luck being the cause.  To add to the listless boredom of everyone on board, the water provisions have gone bad.  Salienated bilge water got into the barrels, ruining the drinking water.  Being on half rations of water and nearly a month motionless, has gotten the crew looking for a scapegoat to throw overboard to end a supposed curse on the ship.  The men believe someone didn’t touch the horseshoe as they boarded the boat, and this is why they’ve been windless for so long.  One of Jamie’s prison friends, Hayes, who already hates sailing, is blamed for the ship’s predicament.  The crew plan on using him as a Jonah to throw into the sea to repeal the curse.

Hayes climbs the sail to avoid the crew’s clutches, and a riot nearly breaks out when Jamie won’t allow them to throw Hayes overboard.  Jamie climbs up the mast to talk Hayes down since he’s threatening to throw himself into the sea.  The rational minds of Claire, Jamie, Willoughby, and the captain know Hayes has nothing to do with their predicament, but nearly all of them seem unable to stop it, except Willoughby.  Jamie’s friend knows a lot of things westerners still have no idea about.  It isn’t Claire’s tea that helps Jamie get over seasickness, it’s acupuncture Willoughby does.  At this moment in time, as Hayes life hangs in the balance, Willoughby notices a bird flying low against the water, and knows it means the air is getting heavier.  Wind is coming, he just needs to buy some time to save Hayes life.  He does something he’s refused to do for Claire earlier in the episode … he tells his life story.  It’s an emotionally moving and touching story about how Willoughby ended up in Scotland, dishonored and banished from his homeland for refusing to be a eunuch in the queen’s household.  Back home he was prized for his poetry, but here his language is mocked.  His love of women and desire to keep his manhood has been useless to him since not even prostitutes will sleep with him.  He’s sacrificed everything to keep his integrity, and now he sacrifices his story to buy Hayes time.  As he finishes his tale he throws his poetry into the sea, and the winds come back. 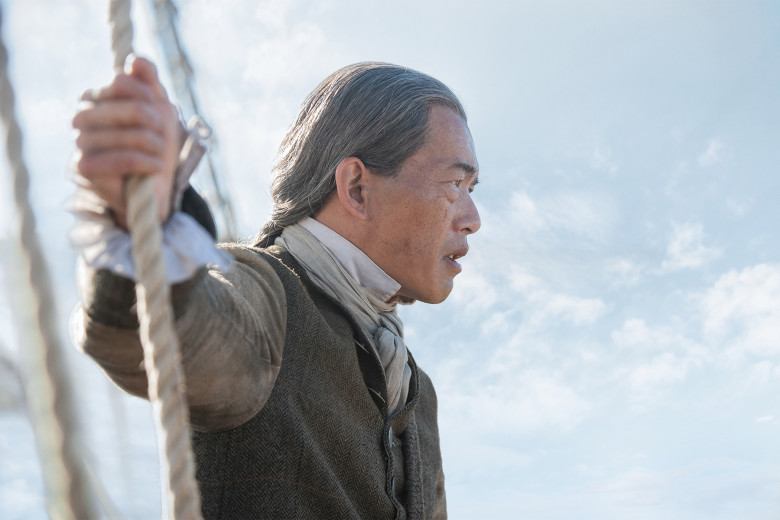 The excitement of movement is short lived, as a British ship signals the Artemis to stop.  The captain of the Porpoise rows over to ask for help.  A plague has broken out on his ship.  Out of a crew of 400 people, 100 are sick, and another 80 are dead.  Claire made a commitment when she became a doctor that she would help people, so she volunteers to go over despite Jamie’s worry about being separated.  She tells the captain she’ll go over and help as best she can, but then needs to get back to the Artemis.  Her modern knowledge recognizes an outbreak of Typhoid Fever, which she is inoculated against, and she quickly arranges for the sick men to be taken better care of.  Claire can stop the spread of the sickness, but the sick men have a slim chance of recovering.  The Porpoise suddenly sets sail without allowing Claire to return to Jamie.  The captain sends word to the Artemis that it’ll meet them in Jamaica, but now Claire and Jamie are separated, with no assurance they’ll end up in the same place again.