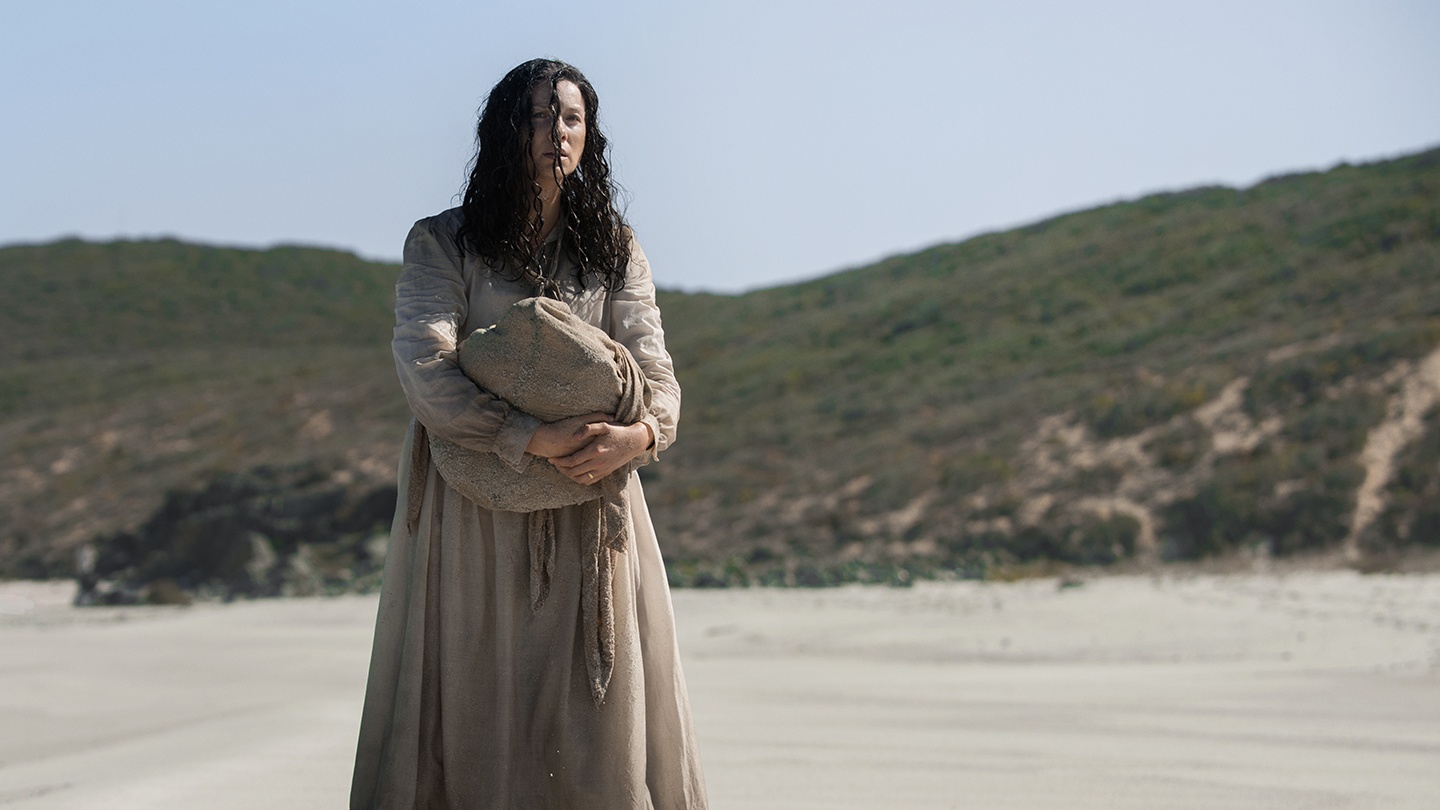 Claire is a survivor.  She’s lived through time travel, war, plague, witch hunts, and a broken heart, so there’s no doubt she can handle whatever’s thrown her way.  In order to take her life into her own hands, she jumps overboard to escape The Porpoise in the hope of reaching Jamie before he can be arrested in Jamaica.  The plan was for the current to take her back to Grand Turks so she could charter a ride to Jamaica and reunite with Jamie, but fate had other ideas, and she is washed up on a different, more remote island instead.

Humans can go three minutes without breathing, three days without water, and three weeks without eating, but Claire hopes it doesn’t come to this.  Her modern knowledge gives her a leg up, and it isn’t long before she finds water to drink in the recess of leaves, and flint to make sparks to start a fire.  The biggest problem is finding civilization in the hopes of hitching a ride to Jamaica.  Instead of following the beach around the island, Claire tracks inland through the thick jungle to try to find a road or path that may lead her to people.  It isn’t an easy journey, and she’s unaccustomed to the variety of nature and the perils of the jungle.  The heat alone would be enough to sap the energy of anyone, especially without any food.  After her first night she wakes up with ants and their bites all over her legs.  The bites are soon infected and blistery.  It isn’t long until Claire deliriously wanders into a small homestead where she sees a man preaching to some goats.  She faints. 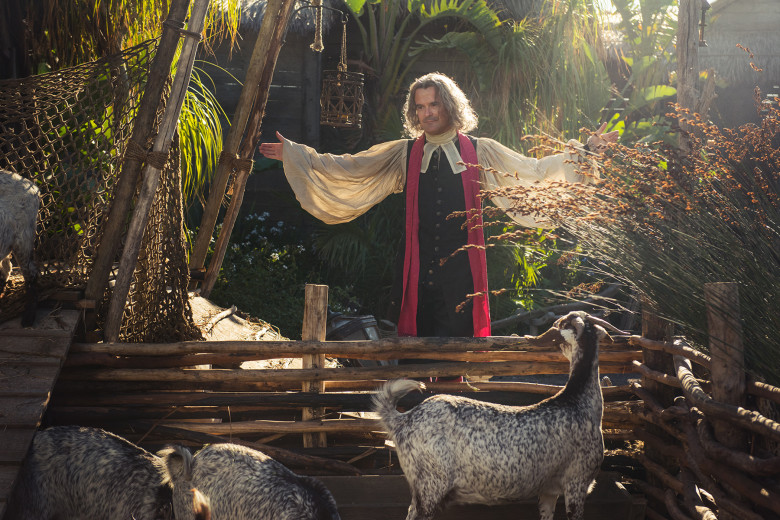 At first it seems like she’s happened upon the perfect people to help her out.  She wakes up in a bed, tended to by a Spanish speaking woman who’s tied her up so she can’t scratch at her legs.  Claire is weak, and drifts in and out of consciousness until she’s awoken by an English priest named Father Fogden.  He can help her get to a fishing village that’ll take her to Jamaica once she’s better, but her hopes soon fade to bewilderment as Fogden begins having a conversation with a coconut he calls “Coco”.  She’s unsettled by how unhinged Fogden is regarding the coconut, given he appears otherwise to have his wits about him.  Claire’s eyes give away her mistrust of Fogden, and you can see the gears spinning in her head about how to best extricate herself from this situation and get back to the task of finding Jamie.

The Spanish woman doesn’t like Claire at all, and is suspicious of her when she takes Claire’s clothes to wash and sees a zipper in her corset.  It’s soon clear she wants Claire to leave their house as soon as possible.  This is fine for Claire, since she wants to leave right away, but Fogden won’t hear of it.  There are runaway slaves living on the island, as well as pirates, and he tells her it isn’t safe for her to travel alone.  He offers his company, but has no intention of leading her to the fishing village for at least a week.  An argument breaks out between Claire and Fogden, and then another between Fogden and the Spanish woman, who turns out to be his mother in law.  Fogden was a priest in Cuba who fell in love with a married woman.  They ran away together and came to this island, but she died soon after.  Her death has had a huge impact on Fogden’s mental well being.  This loss coupled with Fogden’s penchant for smoking marijuana, makes it no surprise he’s befriended a coconut.  Claire even goes so far as to stage a conversation between herself and “Coco” in order to convince Fogden the coconut told her it was a good idea to leave the next day.  It surprisingly works, and Fogden agrees to take Claire to fishing village in the morning. 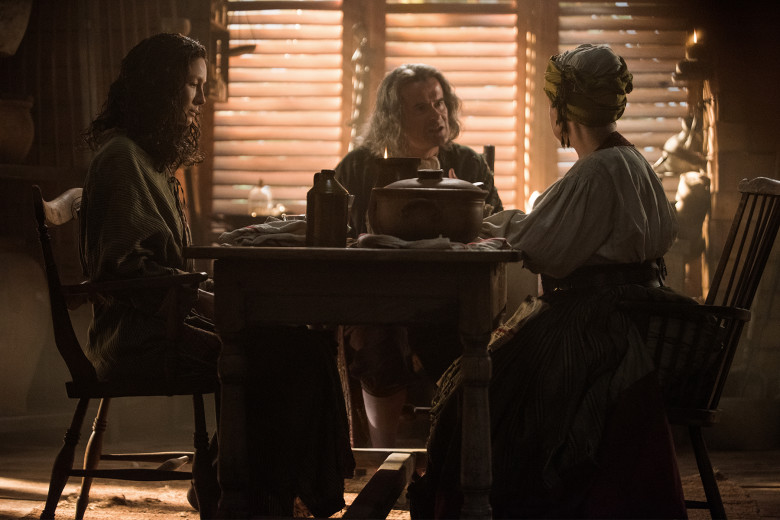 No one should be surprised about how fate intercedes into Claire’s life, though at times the coincidences are beginning to seem a little too convenient.  This season the convenient coincidences have been a little too heavy handed, and it’s making me worry about the direction Outlander is heading.  A little coincidence goes a long way.  It’s something I hope doesn’t begin to take me out of the story, crushing my suspension of disbelief.  That being said, I haven’t read any of Diana Gabaldon’s books, so I have no idea if these are things she’s written, or if the writer’s room of Outlander has taken upon themselves to concoct them.

Claire and Fogden’s journey is cut short by the discovery that a Chinese sailor has roasted and eaten one of Fogden’s prized goats.  This completely destroys Fogden, and it’s clear they won’t be going anywhere this day.  The Spanish woman has the head of the goat, which Fogden takes and places on a barrel.  He then goes and gets a jar full of insects which he dumps on the head of the goat, and explains to Claire they come from a sacred cave in Jamaica called Abandaway.  The cave has some magical qualities, and it is said that people disappear in the cave and are never seen again.  This name, Abandaway, strikes Claire, because it’s the same name the fortuneteller woman she helped earlier in the season said to her.  The woman told Claire that Abandaway will devour you.  Is there some mystical draw to the cave, or power in it similar to the standing stones at Cragh Na Dun?  Is it a portal in time?  Whatever it is, it’s clear Claire will end up there by the end of the season. 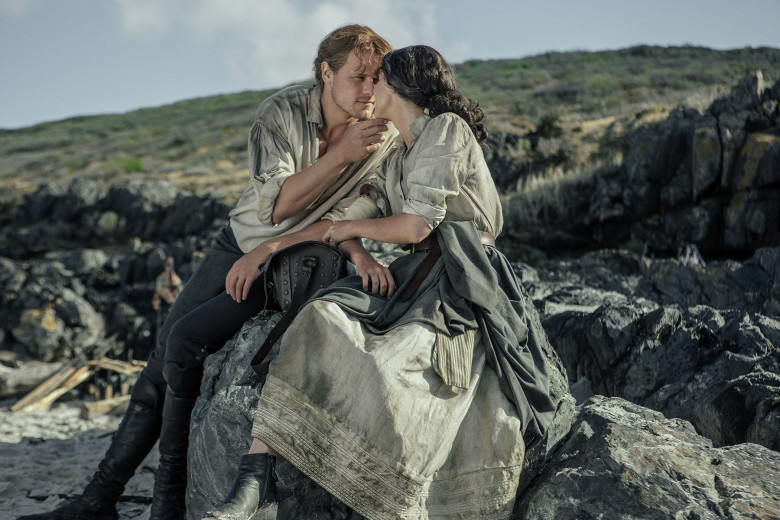 A hope springs within Claire when she hears of the Chinese sailor.  The Spanish woman discovered a ship with broken masts, and a bunch of sailors camped on the beach.  Claire runs for the beach, but is too late.  Jamie and the sailors have repaired the ship and are about to leave.  Claire pulls a small mirror she’s taken from Fogden’s house and signals the boat.  Jamie sees Claire through a spyglass and rows to shore.  They are reunited.  Jamie’s boat has suffered through a storm and lost many of their crew, including the captain.  Since Jamie has given his blessing to Fergus and Marsali, he wants to have a wedding for them to take the crews mind off of their recent calamity.  Father Fogden officiates the ceremony.  There’s a touching moment when Fergus is asked for his full name during the wedding. When he doesn’t have a last name to give to Fogden, Jamie tells the priest Fergus’s last name is Frasier, solidifying that Jamie sees Fergus as a son.  Fogden officiates with some bizarre flourishes, and soon everyone is happily back on the ship.  The happiness may be temporary, since the problem now is how to rescue Young Ian without being captured by the British when they reach Jamaica.