Tweetable Takeaway: John must confront his old actions for the CIA on #PersonofInterest
Tweet

PERSON OF INTEREST splits “Truth Be Told” half-and-half between John’s CIA days and Root and Harold uncovering some nefarious Samaritan plot. The episode is perfectly in keeping with the series’ style, providing a case of the week that’s deeply personal to a character and giving the stone-cold killer side of the dynamic a little screen time. After “SNAFU,” which frankly almost fried my circuits, this episode is a nice mental reprieve while still being engaging.

The thing with Person of Interest is I basically watched it all at once a few months ago so the more procedural episodes just felt like pleasant mindless blips. It’s different to watch week to week (or, as the bizarre schedule has it, day to day.) This episode is great, and a brilliant example of how to do a case of the week that’s engaging, provides character development, and advances the season’s overall plot. But my problem is that these episodes are a bit like cotton candy to me. They’re enjoyable but ephemeral. I don’t even have that much to say about it overall. To be honest, this is a great example of why I only review sci-fi shows anymore. Even when you give me all sorts of ethical debates, intrigue, and character history, the best I can muster is grunting things like “good!” “fun!” “liked it!” My brain just isn’t wired for stuff that doesn’t involve a little supernormal weirdness. 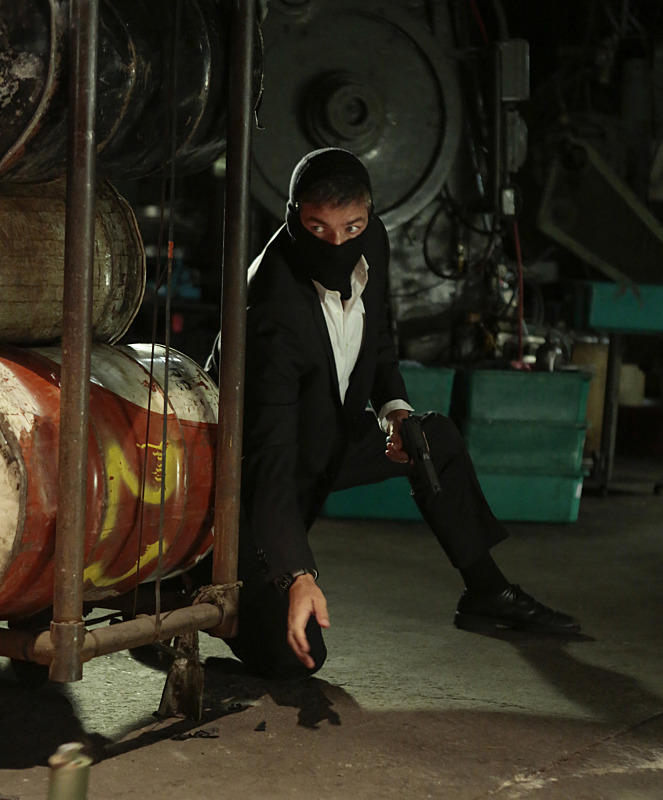 I always love what this show does with its opening. Finch used to do the same monologue about how “you are being watched.” When Samaritan took over, the whole aesthetic changed to its interface rather than the Machine’s. This time, half of Finch’s old monologue was replaced with accusatory statements from Samaritan’s creepy leader Greer. It directly confronts the audience and demands that they accept responsibility for their part in allowing mass surveillance to flourish in order to “feel  safe.” That’s always been the undercurrent that runs through the whole premise, but it’s just completely in your face with it now. This show makes me happy.

John was the star of “Truth Be Told,” not just on the action side of things but because the plot becomes about him taking responsibility for his own actions in a previous period of his life. For a while it looked like it would be about his culpability in the death of an innocent man, but ultimately it was about giving their number the closure that he needed to move on. I particularly liked John’s menacing old CIA boss saying “you always were good at doing what needed to be done.” That sounds like a phrase that should only apply to terrible things, but here it’s about telling a lie out of kindness. It’s that sort of subtle detail that makes this show stand out.

Oddly, I was always fine with John’s sweet girlfriend but I’m equally fine with the two of them breaking up. Especially since she was so understanding of the situation and he was sad about it. One of the things I generally love about Person of Interest is that it takes clichéd scenarios and never plays them to the expected script. John having a lady friend never created artificial drama between him and team members, she was never (or has never yet been) used against him by bad guys etc. There was once an episode where Harold and John take care of a baby that emphasized the inherent humanity of children rather than the “sanctity of life.” They acquired and continue to take care of a dog who watches over their secret base, for goodness’ sake. This series is just a generally pleasant experience. On the nerd side of the plot, Root and Harold tracked Samaritan’s goings-on and found a few clues that we’ll get to piece together later. My favorite thing about the episode was the Machine sending them Emily Dickinson poetry in binary. That’s a beautiful mix of eccentricity, sentience, and dorkiness. Like she couldn’t just give them the poem? Nope, it has to be in binary. Additionally, Root’s cover identities are always fantastic fun just because Amy Acker plays Root with so much glee and the covers are so incongruous with her previous life as an amoral psycho killer. Fusco wasn’t in this episode at all, but he didn’t really need to be. There wasn’t anywhere for him to fit. John carried it well.