There were two things going on in this episode of PITCH, one of which I liked and one which I thought was reductive annoying garbage. The awesome thing was Ginny participating in the team feud with the Cardinals, giving the episode its title of “Beanball.” The misstep was her former romantic relationship with a complete lying jerkface, and she didn’t even get to call him out on it. It’s a well-known fact that I can’t stand traditional romantic tropes and this was an unwelcome intrusion on the otherwise pitch perfect world of Pitch. 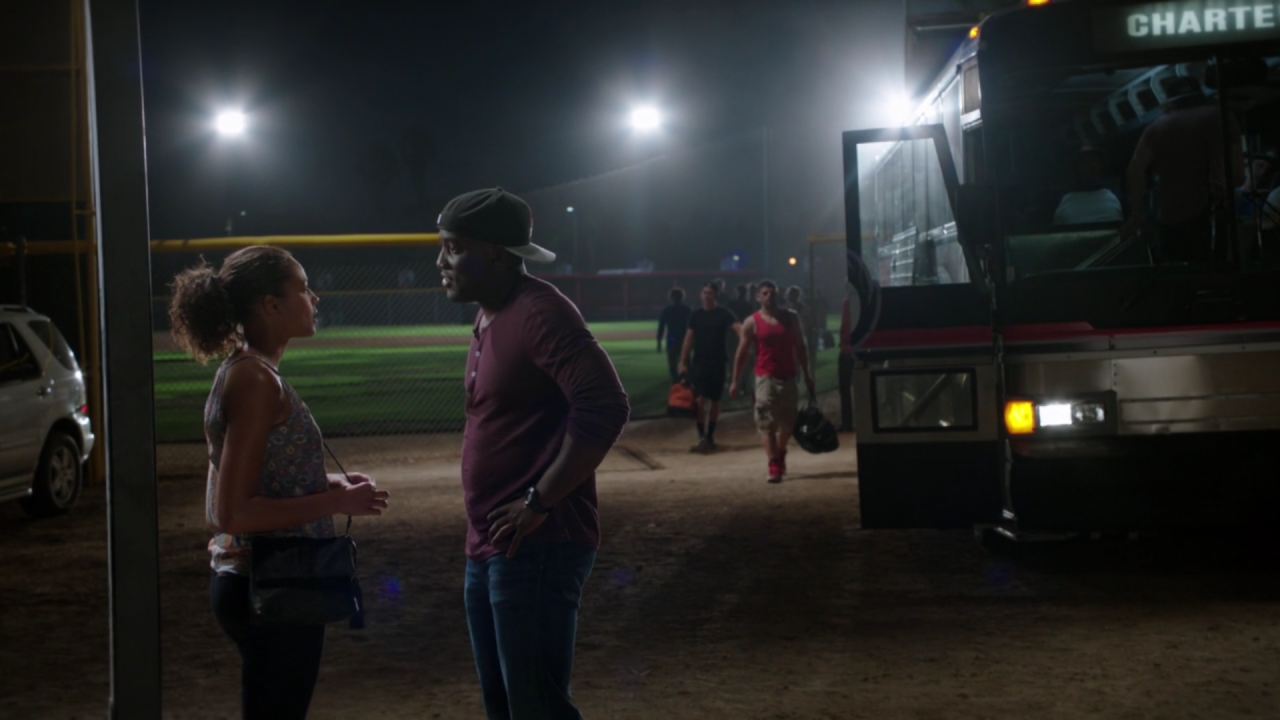 None of this is to say that Ginny can’t have romantic relationships or own her sexuality, but the whole storyline irked me. The man straight up lied to her about quitting baseball, slept with her, and then was like “sorry, I’m just gonna keep playing. Why aren’t you happy for me?” I wanted her to punch him in the face but all she got to do was be upset and walk away. That’s respectable, but it’s in no way satisfying. Additionally, he whined about how she never came to his games and sat in the stands watching “like the other girls.” Then she showed up at one. How the hell was she at this guy’s game? Starting pitchers in the Minors work on their off days. The day before their starts they dress out. The other three days off in their rotation they sit in the stands and chart pitches. Explain to me how Ginny managed to get time off during the season to go to another team’s game in the same league some unspecified distance away? That doesn’t even logistically compute. It was just a nonsense trumped up drama moment. So on top of feeding me gross romance garbage with a guy who is clearly not respectable, they messed up their baseball and I don’t appreciate that. Additionally, of course the guy has compromising pictures of her that got hacked. One moment of poor judgment haunts a woman for all time. I’m usually all for this show doing the exact thing I predict but in this case I’m not here for it. Poor Ginny didn’t even get to have a fun relationship, just a skeevy one. I feel dirty after watching this episode. However, there were elements of it that I enjoyed. I loved the manager Al and his political power play with one of the owners to keep his job. He’s so smart and so good at working his angles I was just grinning the entire time he was pleading his case. His spat with the umpire was fun and his dinner with Maxine was brilliant. The ownership/management machinations are an unexpectedly rich dimension of this show. They definitely take it from being a story about a bunch of jocks to a realistic representation of an entire baseball franchise and all the attendant craziness that comes with it. I also found it satisfying when, after the GM had run around the entire episode trying to find someone who spoke Korean, Al just straight up spoke Korean himself and could respectfully tell his player that he was being sent down. That was a little bit of a Tommy Lasorda moment there as Lasorda became fluent in Spanish so that he could directly communicate with all of his players. Also did they imply that the main owner guy and the owner lady are married or am I misreading that? Because that’s another Dodgers-esque moment, invoking the messy McCourt divorce scandals. It’s not too hard to find real-life inspiration for baseball drama I suppose. Regarding the actual gameplay storyline in this episode, it was well done. The pitcher Miller who’s been talking crap about Ginny the entire time was on the disabled list because the Cardinals’ starter hit him with a pitch and broke his hand. Ginny wants to get revenge but no one on the team will let her, essentially because she’s a girl. She takes it upon herself to bean the opposing pitcher anyway. The whole thing escalates until Ginny gets angry that the Cardinals won’t hit her back and she charges the mound. The nonsense with the Cardinals’ catcher was unnecessary (see above), but the rest of the plotline was great. It provided Ginny an opportunity to prove herself, was a great way for Miller to finally accept her, and let her demand equal treatment both from her teammates and from her opponents. I continue to absolutely adore Lawson. He’s not so much protective of Ginny as he is supportive and it’s touching every time he waits around for her to have a chat. Once her jerkface ex-paramour told her she needed to trust someone (yeah, like you can talk, buddy) I demanded of my TV that she go find her new catcher pal and put that trust there. And she did. I think this show is so satisfying not because it does what I want or expect, but because it’s honest when it does it. While every episode so far has some kind of eye-roll inducing “shock” moment, it never tries to do the most dramatic thing possible at the expense of character or logic. The team is presented as a team and not just a stage for drama that would tear a team apart. Also I’m going to need Ginny and Lawson’s relationship to stay strong but never sexual, ‘kay? Can you give me this one thing? Complete and utter sidenote: I adore the score for this show. I just looked up the composer and it’s apparently two people and a third person who’s done additional music. I guess that works? I have no idea how I feel about that, but then again I have a favorite TV composer who I revere as a cult figure so this is a new situation for me. Kudos to John Ehrlich, Jason Derlatka, and Black Violin who all are apparently responsible for this score.

Anyway, this episode was weird in the skeevy way I didn’t want to happen. But one plotline of one episode being off does not mean the whole thing is bust, plus I’m pretty sure this particular trope is one of my personal vendettas. It might work just fine for most other people. I’m still excited to watch this show every week and see where they take it. If it starts devolving into sexist drama every episode is when I’ll call foul.