I tried not to have expectations for Punisher because Frank Castle–particularly the incarnation of Frank Castle that we know from the Marvel Cinematic Universe’s Daredevil series–is one of my favorite characters in anything. Even so, this show has already put my worst fears to rest and given me a narrative that I’m utterly enthralled with. One-third of the way through I’m already in love with it.

To be honest, there are a few reasons why I was quite nervous about the Punisher series. The cultural and political issues inherent in the concept of the Punisher have been present in his character from his creation, but to place him at the forefront of a piece of mass media in our current political circumstances and cultural climate strikes me as fraught with risk. First, a show about a vigilante who enacts his own brand of justice through mass shootings is just inappropriate in American society no matter the time or day. Our country is far too saturated with guns, angry and entitled people, and with untrained gun owners who tie up their power and identity in that ownership. Presenting a gun-happy character to the American populace as a hero–no matter the context–is particularly dangerous as it’s easy to lose that context and wind up with people equating violence with heroics. Second, but stemming from the first issue, Punisher and the skull symbol associated with him are often co-opted by white supremacist groups and bands of rogue racist police. They take the surface concept of Punisher (white guy with guns putting down bad guys!), ignore the nuance of the character and storylines, and hoist him up as their champion. I adore the Punisher character but I often hate to say so because there is Frank Castle as he is and there is the way he has symbolically drifted in racist subcultures to represent causes that I am vehemently against (and he would be too.) Because I was bringing all of these concerns to my viewing of the show, I was fully prepared with my swiftest, harshest judgment if it should slip up. Fortunately, Punisher is shaping up to be one of the most excellent and self-aware entries in the MCU. 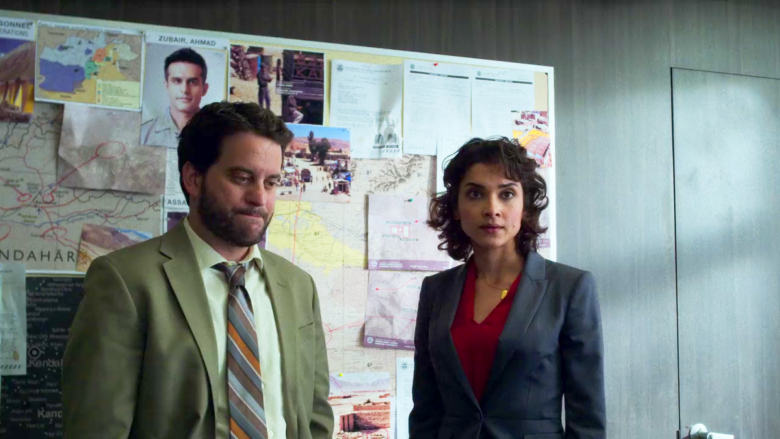 Almost immediately, this show took pains to address all of my concerns. Frank very specifically only goes after people who harm others. It’s demonstrated that he doesn’t want friends, thanks, payment, or even kindness. He just needs to punish those who the official judicial system cannot or will not catch. Mostly, he’s still preoccupied with the death of his family and, once it’s suggested that he may have been responsible for their deaths, the guilt gnaws at him constantly. In addition to explicitly stating Frank’s ethical code numerous times, there is also a veterans group whose members discuss their struggles readjusting to civilian life. One of the veterans is an NRA white supremacist gun nut who is constantly called out on his world views. Another veteran is suffering from severe PTSD and he demonstrates that keeping guns doesn’t make you any safer, it just makes you more dangerous to yourself and others. The inclusion of Agent Dinah Madani who is of Persian descent and whose Afghan intelligence partner was murdered by Castle and his old unit is a particularly nice touch. Madani is not defined by her ethnicity and she’s determined to see justice served for her partner’s death. I once wrote a thesis-length paper on how the Iron Man series of films refutes the racist and imperialistic rhetoric of post-9/11 America. Punisher is directly in line with that message.

It seems absurd to praise the straightforward narrative structure of each episode but it’s been sorely lacking in a lot of recent Marvel TV shows and I’ve missed it dearly. Every episode of Punisher begins with the characters encountering an obstacle to their goal. They have to work through the problem to achieve their goal and, in the process, the characters personally change. They experience growth. There are stakes. Every time I get handed an excellent fictional tale in this universe I am largely overjoyed, but a tiny part at the back of mind just gets more and more furious about how bad things like Iron Fist and Inhumans are. If source material as potentially disastrous to adapt as Punisher can be so acutely aware of its cultural context there’s no inherent reason that those other series couldn’t have been just as great. At any rate, thank goodness for good writing and basic plot structure! The premise of this series, and hence the structure that it follows, is that Frank did terrible things during his military service and they are coming back to haunt him. A Homeland Security agent is trying to find Frank while Frank is trying to find the people responsible for the deaths of his family. He gets help from some old and new faces including Karen Page and a computer hacker known as Micro who has had to fake his own death to protect his family from the same people who killed Frank’s. Karen and Micro provide a nice cerebral balance to Frank’s lone warrior persona, while Madani offers another source of tension in Frank’s search. 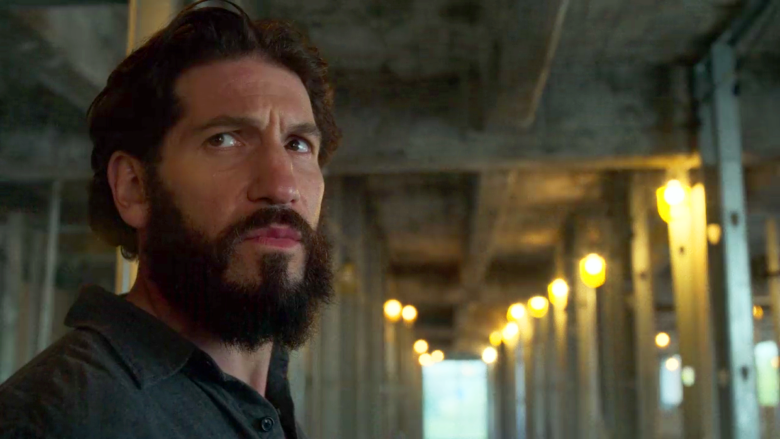 Aesthetically the series can get away with a lot by having violence just out of frame and giving many characters persistent intrusive flashbacks that help move the narrative forward. The hyper-violence of the series is mostly off-screen, with Frank smashing in skulls with a hammer or shooting people just out of our view, or even positioning the camera from the point of view of his victims, with Frank effectively rendering the violence upon the audience. I believe ratings often deal with how many blows actually visibly land and presenting the violence indirectly is a way to suggest carnage without making torture porn the focus of the show. The story is paramount, even in the face of piles of dead bodies in Frank’s wake and I appreciate that greatly. In addition, so many characters have dark pasts or traumatic histories that the flashback structure is a naturalistic plot device rather than a hacky one. The intrusive flashbacks are visualized and presented in a realistic way and I like the way that this story is tackling trauma, revenge, and trust without being too explicitly “touchy-feely.”

Because Frank’s “superpower” isn’t super in the least, the show doesn’t need to rely so heavily on science fiction worldbuilding or expository storytelling techniques. Instead, the focus is on Frank’s history in the Marine Corp and the unsavory things that he did in the line of duty. One of my personal criteria for judging pieces of the MCU is that they have to have appropriately detailed science that explains the logistics behind why the bizarre things in the stories are possible. Here, there is no need for science. Rather, the exposition is provided through Frank’s exploration of his time in Kandahar and Dinah Madani’s parallel investigation into his actions. Frank is an insanely skilled marksmen and a berserker-style fighter and none of that needs to be explained given his military history. What most tickles me is that Madani is an Agent with the Department of Homeland Security–an organization that the MCU already took a jab at when it changed the comic canonical SHIELD acronym to “Strategic Homeland Intervention Enforcement and Logistics Division.” It’s interesting to me that all of these real life intelligence organizations co-exist alongside SHIELD without anyone griping about SHIELD jurisdictional issues. Maybe my thirsty little heart is asking for too much on that one. At any rate, this is the most realistic of the MCU’s stories but also exists quite comfortably within that world with appearances so far by Karen Page and the black market dealer Turk. 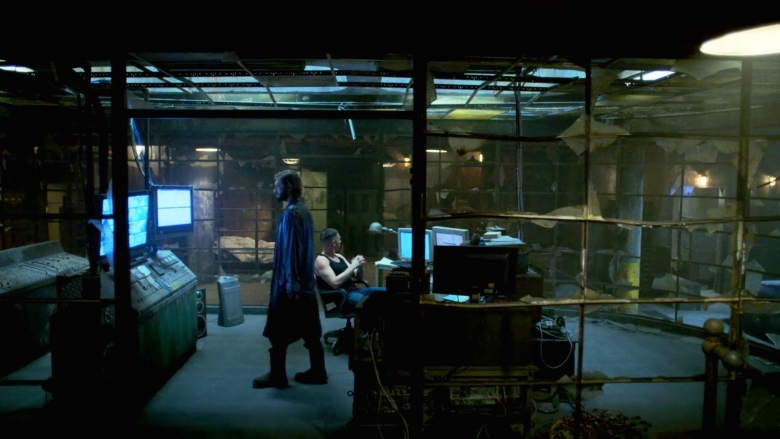 The majority of the characters in this series are completely new to the MCU, yet every single one of them is sympathetic and easy to emotionally invest in. I kept expecting Castle’s old war buddies to be into shady dealings as that’s what we’ve seen from basically every single member of the military in the MCU to date. Instead, they all (so far) seem to be genuine, kind, and trying to help. Castle’s friend Curtiss runs the veterans group, while his buddy Russo owns and operates a highly lucrative privatized military contracting firm called Anvil. They often speak cryptically and hand off large amounts of cash but it turns out that the sums of cash are donations to the veteran rehabilitation efforts and their mysterious meeting was to celebrate Frank’s birthday at his grave. I’m so used to every side character being shady and untrustworthy that I can feel the tension easing out of my body every time they prove how genuine they are. Micro is another character in that vein. He tries to enlist Castle as an ally but Frank tortures him for information. Eventually, Micro gets the jump on him and injects him with a sedative but, to Frank’s bewilderment, he truly did just want Frank’s help. Frank’s worldview might be that the world is awful and everyone is out to get you, but this series has already gone out of its way to prove that that worldview is fundamentally flawed. Even Madani and her partner Sam Stein prove that point. Madani is Stein’s superior and she is often rude to him and treats him dismissively, but Stein is always on board with her secret investigations and calls her on her abrasive behavior. This series is hyper-violent and harsh and yet I also find it one of the most comforting things that I’ve watched in a very long time simply because the drama doesn’t come from the characters constantly betraying each other. 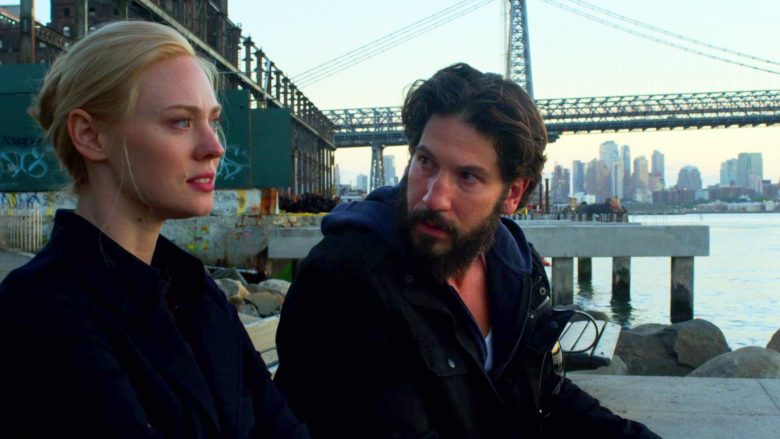 The final thing I have to mention is Frank and Karen because I love them excessively. The relationship between the two of them is caring, kind, and undefinable. Karen is one of the few people who held tight to Frank’s humanity while the world called him a monster and she is one of the only people who we have ever seen Frank trust. I loved the two of them in Daredevil and I love them even more here even though we’ve only seen Karen once so far. Karen also believes that Matt is dead so to have someone she cares about come back from the supposed-grave is an obvious relief to her. Seriously, y’all, when she hugged him I got that old fluttery sinking feeling that means I’ve fallen terribly for another strange fictional relationship.

In the first four episodes Punisher has gone out of its way to be anti-imperialist, anti-violence, and anti-war, even as the narrative is wholly concerned with those three topics. I love how cognizant this series is of what it is and the time in which it exists. Those few things instantly put me at ease and let me enjoy whatever else the show might have on offer. Fiction is always pushing a message, but in this case the series has gone out of its way to distance itself from the hateful conservatism you might expect to be associated with a white, male, gun-loving, war veteran protagonist. In addition to the fantastic way that it tackles sensitive issues, the story itself is well-structured and all of the characters are good people doing good jobs. I never knew I could find extreme violence so relaxing.