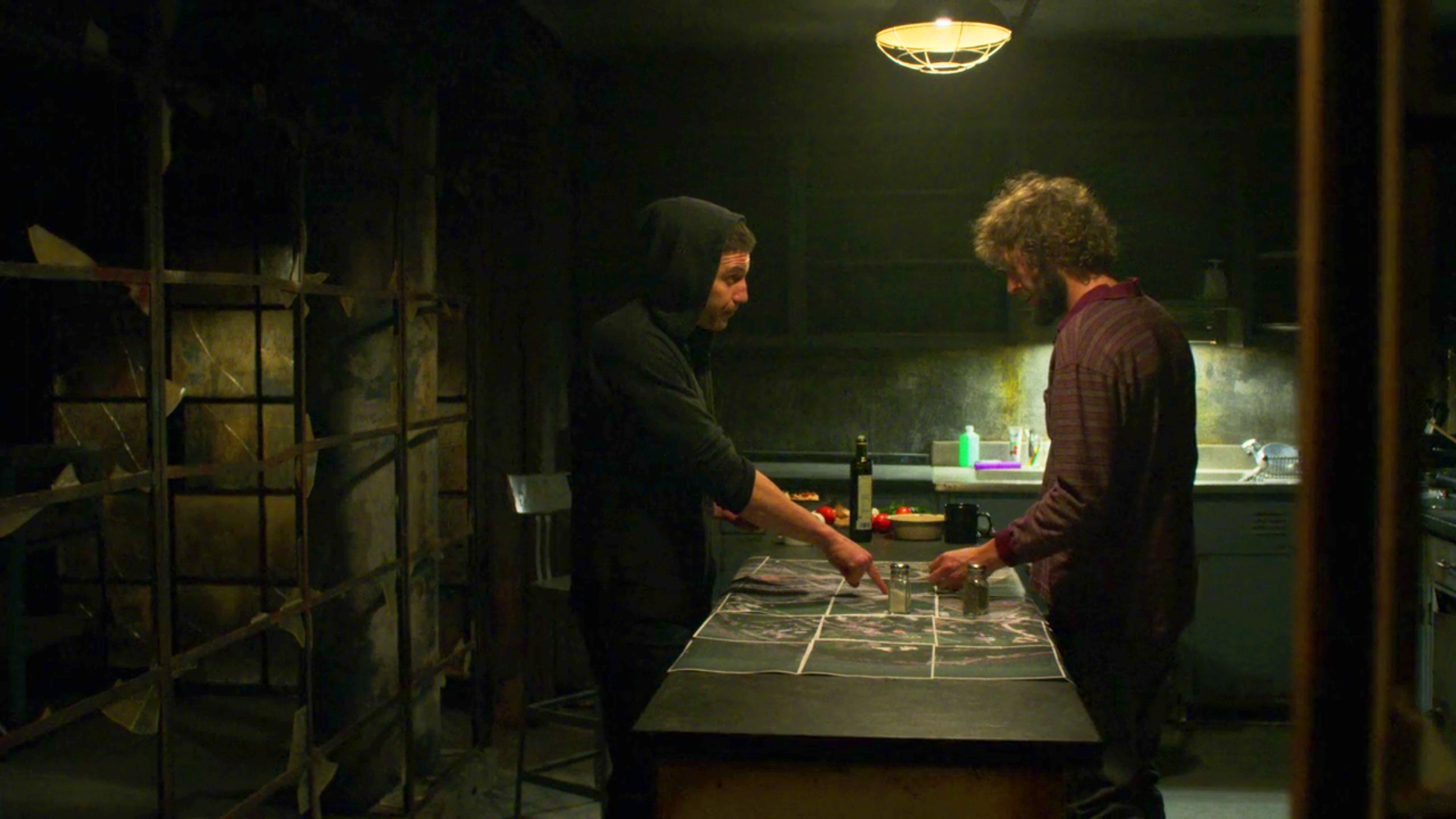 Through eight episodes, Punisher remains as well-paced and intriguing as when it started avoiding the mid-season lull that can happen during these 13-episode Netflix series. The big mystery and corruption storyline provides enough conflict to drive the story forward and the characters all have multiple ethical dilemmas and interpersonal issues to contend with which makes for a rich, engaging plot.

The major plot developments over this middle chunk of episodes are that the head of Covert Ops in the CIA is running unsanctioned operations on his own, Russo is colluding with him, they’ve got Madani’s office bugged, and they’re trying to take out Frank Castle so that he can’t give Madani the evidence that she needs to put them away. That’s a lot, it’s all interesting, all laden with introspection, and also all laced with extreme violence.

The relationship between Micro (whose real name is David Lieberman) and Frank is refreshing to me because they function on an equal level. Frank is the warrior and Micro is the “guy in the chair,” but they’re both well aware that they couldn’t achieve their goals without each other. Micro guides Frank through dangerous situations and saves his life when he’s bleeding out while Frank take Micro’s intel and does whatever dangerous, bloody, physical action needs to be taken to achieve their goals. I like that Micro himself has a personal goal and an empathetic storyline that keeps him from just being dorky comic relief or the butt of jokes. They’re both allowed to experience emotions and question their ethical frameworks without being emasculated but also without veering in toxic masculinity. They are beautifully complex. Frank’s association with Micro’s family is a particularly nice point in their relationship as it allows Micro to care for his family (through Frank) in his absence, but also gives Frank more insight into his partner. It’s Frank’s time with the Lieberman’s that lets him goad Micro into “getting his hands dirty.” Frank also bonds with Micro’s children, helping his daughter fix things around the house and giving his son to have an emotional outlet that he doesn’t have anywhere else. I think the key to Frank Castle is that he’s deliberately a loner because when he gets attached to people that attachment is so strong that if those people came to harm he’d be devastated. We see that in his interactions with the Liebermans and also with Karen. 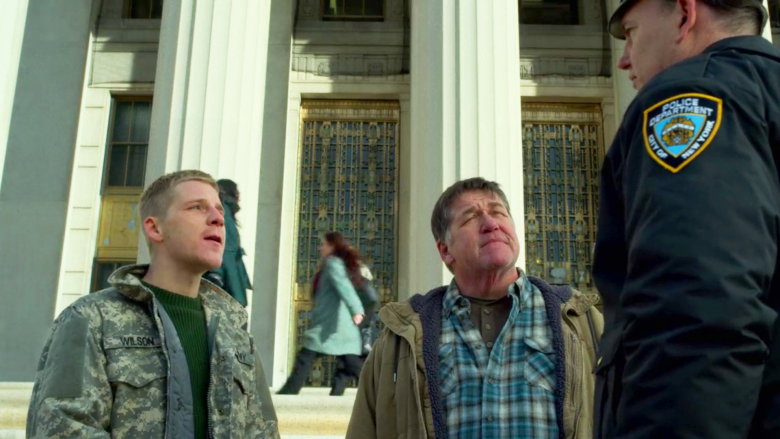 I’m particularly grateful for the side story about the two veterans from the meeting group: the right-wing gun extremist O’Connor and the young man Lewis who has severe PTSD. Lewis literally digs himself a foxhole in his backyard because it helps him sleep. His father is awkwardly trying to give him support and make sure that Lewis knows he’s loved but Lewis is too traumatized and lost to really accept it. He’s searching for purpose and O’Connor has easy answers and a lot of anger. Lewis is arrested for handing out guns rights pamphlets and bailed out by Curtis, Castle’s old friend and the leader of the support group. Curtis informs Lewis that O’Connor is lying about his service record and Lewis goes to confront him. In a fit brought on by wounded egos and a sense of betrayal, they fight and Lewis kills the man with his own knife. I think what I like most about this story is that it’s a story of homegrown radicalization that still somehow doesn’t stigmatize or judge the kid involved. Instead, it takes pains to demonstrate his isolation and the emotional hole that he finds himself in. The last we see of Lewis in these middle episodes, he’s building and IED for as-yet-unknown reasons. He’s a good person who is struggling and simply turning back to what he knows, but none of the skills of war are appropriate for civilian life. He’s willingly becoming a terrorist because of his pain, much the same way that Micro’s son becomes a bully just to make other people feel as bad as he does.

Now, there are a few things in these kinds of shows that always seem to happen: the good old friend is actually working for the bad guy and the sidekick partner of the main cop bites it. Both things happened over the course of these four episodes and, while I can’t say I’m mad about it, I am rolling my eyes a little bit. I feel like Ben Barnes enjoys playing unsavory but handsome creeps in television shows so I should’ve seen it coming but I wanted to trust him so much. He is, at least, interesting in that he does genuinely care for Frank Castle and Madani despite screwing both of them over constantly. He might care about them, but his own security comes first. He’s yet another character who is trapped in villainy by his circumstances. Well-rounded antagonists with meaningful backstories are important and I always love them, but I’d also like to see a story about someone with a terrible childhood who managed to escape it and worked towards being better. Being a villain is too easy when the world has always treated you poorly and, as real life has shown us in stark detail lately, true villains are never as sympathetic or as intelligent as fiction would have us believe. This series also did a great job of making Sam Stein lovable without him being too pure for this world. I hoped he’d make it through, as his loyalty to Madani and his goofy but practical take on his work were uplifting, but I’m not surprised he died. Hopefully that’ll give Madani a clue about Russo. 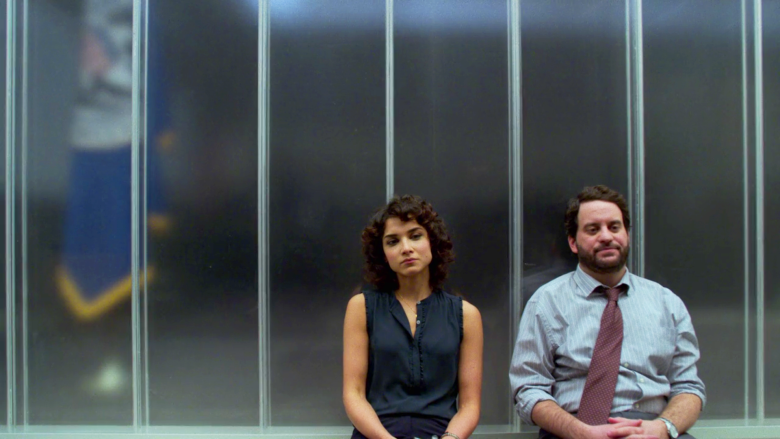 There’s also something that I find slightly ironic about the fact that Punisher has the most well-written relationships—romantic and otherwise—that I’ve seen in a long time. Some shows have one or two characters with really great chemistry. This series is careful to build out every single interaction. Madani and Stein developed trust, Madani and Russo’s mutual attraction makes sense and nothing needs to be forced, Frank and Micro fall into a begrudgingly domestic pattern—every single interpersonal connection is realistic and specifically stems from the characters themselves rather than from expectations and tropes. I’m enamored with the whole exercise. Of special note, the relationships between Madani and Russo and Frank and Karen are my particular favorites. Madani and Russo are both arrogant, antagonistic, closed-off pretty people and their attraction is, in many ways, exactly what it appears to be on the surface. They even both openly admit that they’re using the other for intelligence. That kind of honesty is refreshing, though it does get creepy when Russo murders Madani’s partner Stein and then helps wash his blood off of her body without even a shiver of guilt. Karen and Frank will be the end of me. They’re both damaged, lonely people who want to love but can’t allow themselves to. Their concern and caring for each other is something that I find more touching in almost direct proportion to how small their affectionate gestures are. I almost died one time when two characters held hands so I’m probably a miscalibrated judge, but it still gets me where I live.

I think part of what makes this show so comforting to me even beyond the excellent writing is that, yes, it’s extremely violent and deals heavily with trauma but it’s also cathartic. Frank’s quest for vengeance is pathological but he also gets to enact revenge for the things that were done to him upon the people responsible. No one should ever be the way Frank is, but as a lead character the audience can experience a feeling of closure denied to trauma survivors in real life. I don’t want to hurt anyone, but it certainly is nice to see bad people having to pay for their actions. Since Frank operates according to a strict moral code, it’s also comforting to know that the people being killed are only people who have maliciously done harm to others. An entire story based around his quest for knowledge and vengeance coupled with his protectiveness of the people he cares about makes you feel like maybe the good guys can actually win sometimes.