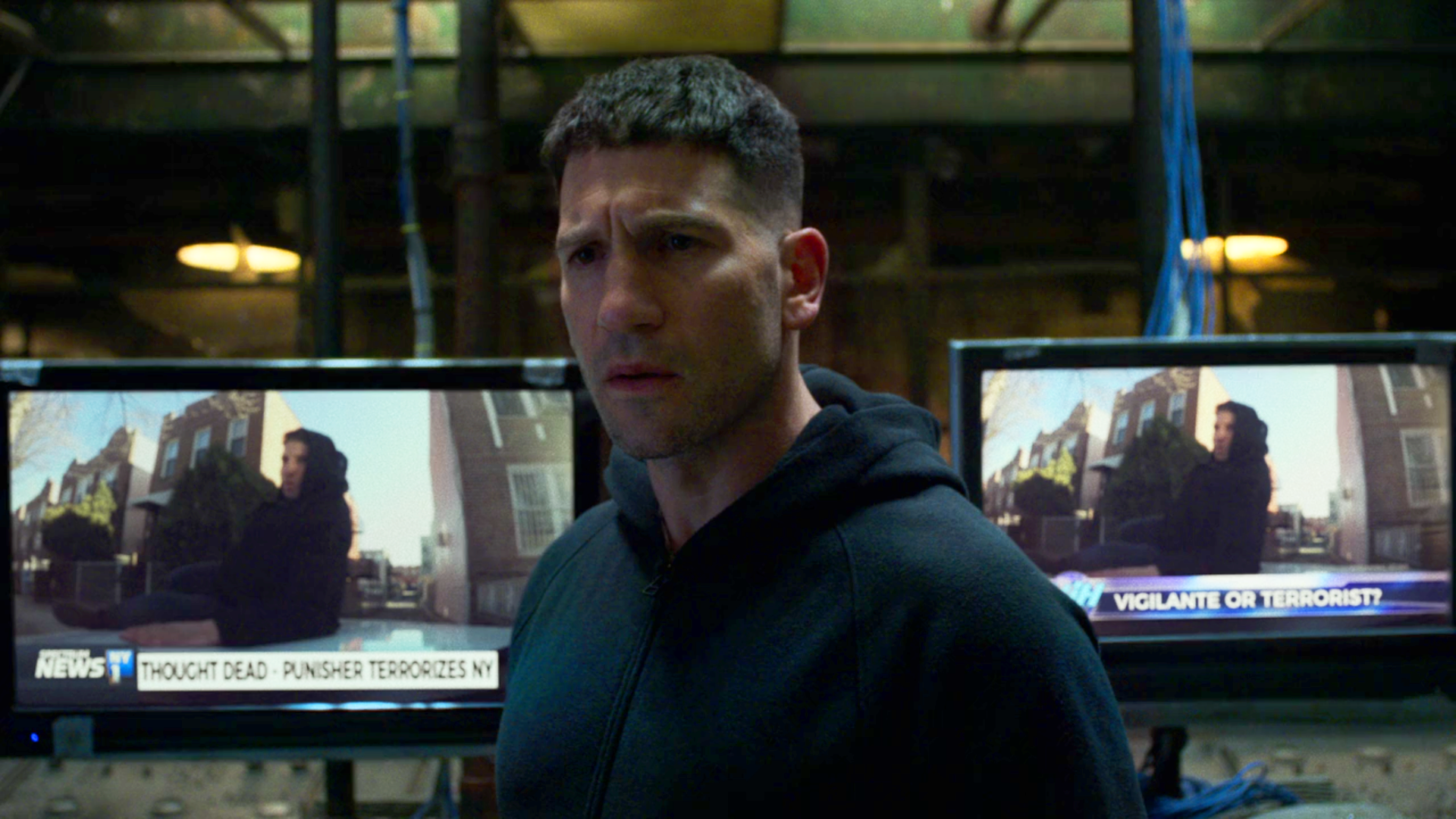 Punisher achieves the nearly impossible, running for thirteen episodes without a single slow spot, filler episode, or boring moment. It effortlessly weaves together multiple interrelated plots, navigates sensitive issues with care, and gives every character development. I’m comfortable saying this is the best of the Marvel Netflix series only barely edging out Jessica Jones.

One of the stylistic strengths of this series is that the moral and ethical issues of the character’s actions are the central focus of the story. There are lots of action scenes and episodes of violence but they always have a purpose in the plot rather than being the main reason the story exists. There are two kinds of action movies (or shows, in this case): those that are an endless succession of pointless choreography and those that are stories that focus on people who are often in action-packed situations. I find the first kind of action story boring but it’s unfortunately the most common. Punisher is the second kind of action story and it’s refreshing to see, especially considering how easy it would be to just turn this premise into torture porn. 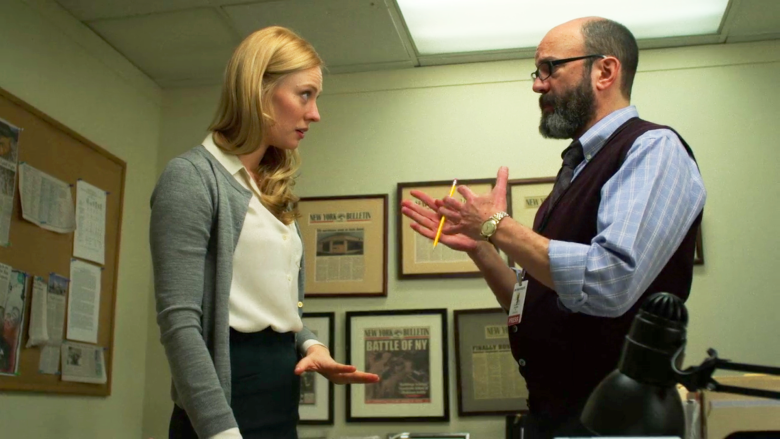 Plotwise, one of the most important elements of the last five episodes is that (amongst other things) the veteran Lewis turns into a full-fledged terrorist. Lewis serves two concurrent functions in this series: the first is that he demonstrates the dangers of radicalization in the United States even while the wars that he and Castle fought in were (in our world) predicated on white supremacist principles and the dehumanization of Middle Easterners and Muslims. Punisher largely avoids discussing the sociopolitical circumstances of the War on Terror but the undertones are there in Frank’s old death squad. The second function Lewis serves is as a contrast to Frank’s particular brand of violence. The Punisher is often co-opted by white supremacist groups as a symbol of taking justice into your own hands. The difference is that Punisher doesn’t enact violence to further nationalistic goals. Lewis does. Someone told Lewis that the ideals he fought for were being violated and Lewis channelled that into mass violence, championing himself as a vigilante hero. The line between terrorist and vigilante is paper thin and possibly non-existent, but in this case Lewis is a direct message to people who want to misappropriate Frank Castle for their own ideological aims. The message is basically: you think you’re a good person but you’re not; you’re sad and weak. Lewis even attacks a pro-gun control Senator as a tyrant and Karen Page as the representation of the “liberal media.” The situation is further complicated when the rest of the media decides Frank is allied with Lewis in his bombing spree, leaving Karen, Madani, and Brent Mahoney (the detective friend of Matt Murdock and Foggy Nelson) to debate whether Frank would kill innocent people in service to an ideology. This series constantly asks excellent questions and never offers definitive answers. The ambiguity is part of the show’s nuance and fits the Punisher character well.

The episode where Lewis goes after the Senator and Karen is probably the best in the series. It’s structured well, has a few unreliable narrators, and Karen gets to be just as awesome as Frank in helping to rescue herself from a bad situation. It’s hard to pick “the best” when the whole show is so fantastic, but that one definitely stands out. 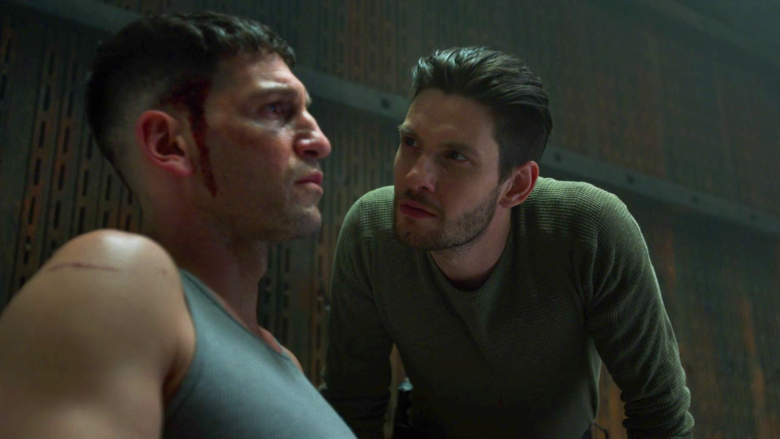 Once Lewis is dispatched, the rest of the season works on resolving the issues between Russo, Madani, Castle, and Micro. Micro goes to Madani with all of his information and he and Castle agree to help her catch the head of CIA Covert Operations Agent Rawlins and Russo who has been helping him since the beginning. Micro and Frank come up with their own secret plot to allow Frank a shot at killing Rawlins and Russo before Madani’s official justice can get to them. Rawlins and Russo are both responsible for killing Frank’s family in an attempt to get him out of the way and they also killed Madani’s partner in Afghanistan. The last three episodes are focused on Frank’s revenge and on the complications of keeping Micro’s family safe and trying to put his life back together. The Liebermans are kidnapped by Russo as leverage against Frank and Micro and the two of them make a deal to trade themselves for the Liebermans. Ultimately, Frank gets to go on like two separate killing sprees to take out all of the people who have done him wrong while Micro is reunited with his family in some very sweet scenes. Russo escapes Frank’s first round of justice and Frank has to track him down one last time. Rather than killing him he mutilates his pretty face which is a fitting end. The pacing, twists, and tension of the final three episodes is just as great as the rest of the series and provides a cathartic conclusion to the plot without leaving any loose ends or unresolved issues.

It’s ironic that there’s not much left to say about this series. What was excellent at the start stays great throughout. The conclusion of the plot that’s set up even as far back as Daredevil is deeply satisfying. The show is beautiful, well-constructed, self-aware, and expertly written straight through. What else can I tell you? 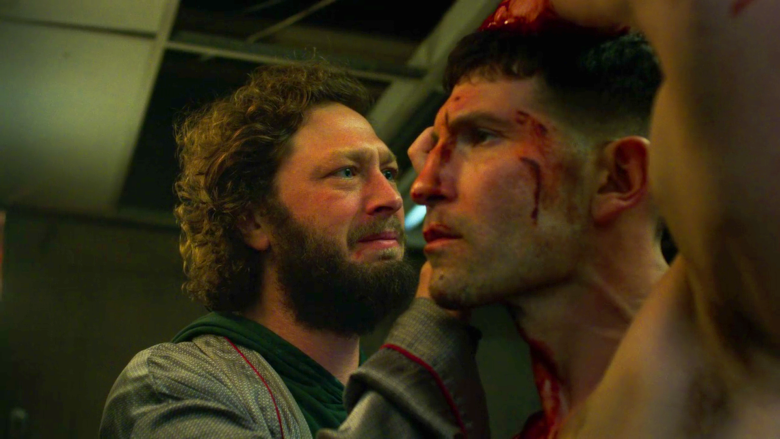 Overall, everything about this series is spot on. Sure, the basic premise is one of white male aggression, but the story takes pains to put all races and genders on completely equal footing. Frank’s violent tendencies don’t give him more value than Madani’s investigative skills, Karen’s research abilities, or Micro’s surveillance expertise. All of those things are of equal weight in this series. Without any of those other pieces, Frank’s violence is pointless as he wouldn’t have any reason to use it. Punisher does a great job of humanizing everyone–vigilante, terrorist, and citizen alike–and it imbues its mystery story with compassion and hard questions.