Tweetable Takeaway: Annie has a bubbly cheer that overstays its welcome with cartoonish characters.
Tweet

The moment that sets the newest adaptation of ANNIE in motion is when mayoral candidate Will Stacks (Jamie Foxx as the 2014 Daddy Warbucks) saves the titular character (Quvenzhané Wallis) from a truck barreling down the street.  Will’s campaign has so far been terrible, but lucky for him a bystander recorded the whole rescue on his phone and it becomes an instant viral hit.  As his campaign advisors play the viral video for him, we see the viral video’s angle change to another completely different placement across the street instantly.  Annie is the kind of movie that throws any attempt at verisimilitude or realistic characters out the window and instead screams every chance it can get, “I am a movie.”  Worst of all, nowhere is a wink to the audience to be found.

For the few that don’t know, Annie follows the story of a young girl living in a foster home under a cruel guardian when an obscenely rich man takes Annie under his wing and eventually a connection grows between the two.  And of course, all kinds of songs get sung along the way.  The most recognizable tunes remain for the most part intact (“Tomorrow” and “Hard-Knock Life”), if not with some additional beats and embellishments the movie feels necessary to tack on, just so we all know how updated this movie really is.  At least three songs were written for the film, but I couldn’t tell you what they were or how they sounded, which is a testament to their unnecessary inclusion.

One of the movie’s worst offenses comes in the form of its choreography.  Although, the choreography of the dance numbers might not have been so bad if the audience could at least have gotten a better view of what exactly is occurring in each.  Between the fast cuts and camera shots not fully revealing what’s going on, there’s often a frustrating sense of just wanting the camera to sit still and stay put.  Again, this is a movie that needs to let it be known it’s a movie, and so a glut of editing and camera shots is what we get. 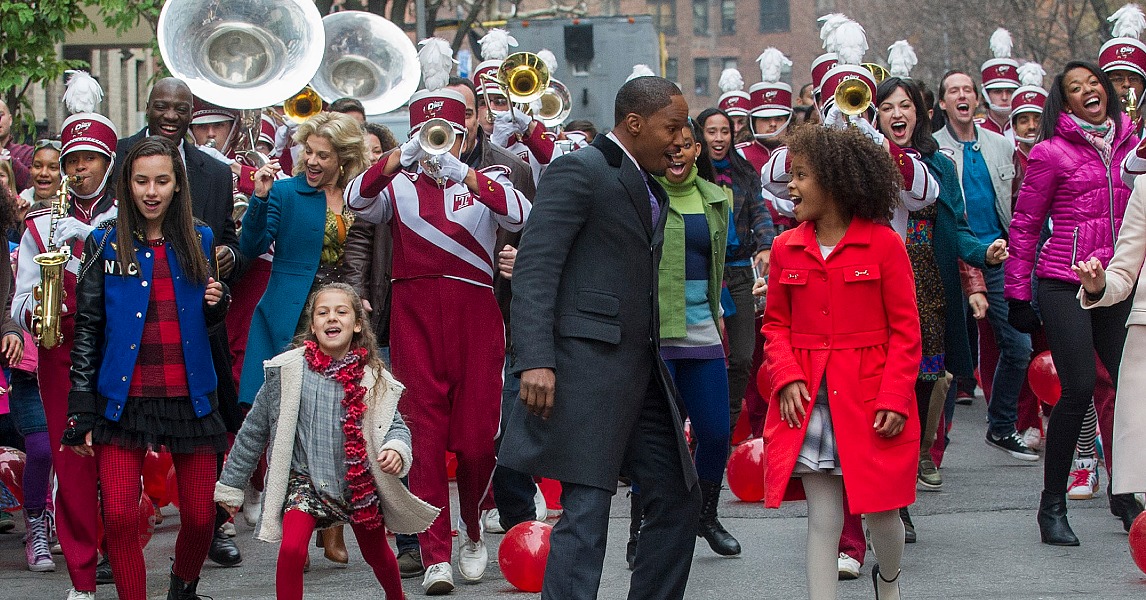 The first half of the movie has a bubbling optimism that’s hard not to get taken in by, but as the movie progresses, the cheery charms of it all start to grate.  Quvenzhané shines as Annie.  She’s cute, she belts out all her lines with energy, and she nails a role that is the quintessential big movie star role.  There’s a gnawing within that she returns to braver works as we saw in last year’s Beasts of the Southern Wild, a movie that is musky, textured tobacco in direct opposition to the sugary sweet bubblegum of Annie.  But she’s got plenty of time left.

The second of the movie’s worst offenses comes in the form of Cameron Diaz as Miss Hannigan.  Again, to the biggest degree imaginable, we get a character so character she’s caricature.  If the face can contort in a thousand different ways, Diaz’s face hits one thousand and one.  She deserves her own dictionary entry under garish.  The originally written character may be one of unrestrained cruelty toward the girls, but instead of giving the character some dimension or realism, here she’s played as a drunk cartoon.  That is, until the third act requires a complete change of heart and in the process, creates an entirely new character.

Additionally, Bobby Cannavale as Will Stacks’ aggressive campaign advisor is similarly one-note and Rose Byrne as the love interest mostly is played only for the love interest.  It’s tough to find oneself interested in the actions or fates of any of these characters when they all feel like nothing more than movie characters.  At 2 hours, the movie feels far too long, and by the time Annie’s “parents” show up to take her away, the movie feels as if it’s completely overstayed its welcome.  Annie coasts on its good feels for a chunk of the movie, but in the end there’s only an ill will toward the whole affair.  One just has to remind oneself to just stick out your chin, and grin, and wait for the ending credits.  I give Annie 2 pieces of bubblegum out of 5.