Tweetable Takeaway: Focus isn’t the best con artist movie ever made, but it entertains enough.
Tweet

In FOCUS, Will Smith plays a con man pulling off a variety of heists and deceptions. His biggest mission in the movie? Convincing moviegoers he can still pick good scripts, having come fresh off After Earth and Winter’s Tale. Does he succeed? Focus won’t mark a return to greatness for Will Smith, but it’s a passable diversion at worst.

The movie begins with Margot Robbie playing Jess attempting to pull a con on Smith’s character, Nicky. Official con artist nickname: Mallow. That’s right, Will Smith’s character takes his code name from a marshmallow. Nicky apparently comes from a long lineage of con artists and sees right through it. But he takes some pity on Jess, and shows her a few of his smooth moves in one of the movie’s slicker sequences. Jess is hooked, and tracks Nicky down to the Super Bowl in New Orleans where a group of 30 or so pickpockets are running a highly sophisticated operation, snatching watches, wallets, and all sorts of jewelry. Again, it’s another slick and fun sequence, involving what has to be the most honest gaggle of thieves working with one another in history. Seriously, the warehouse they all dump their hauls in has cash and diamond necklaces lying everywhere. Every pickpocket in that place has to be itching at his or her fingertips walking around all those valuables. Soon the work is done, and Nicky and Jess, both being the highly attractive human specimens they are, do the only thing possible and start sleeping together. 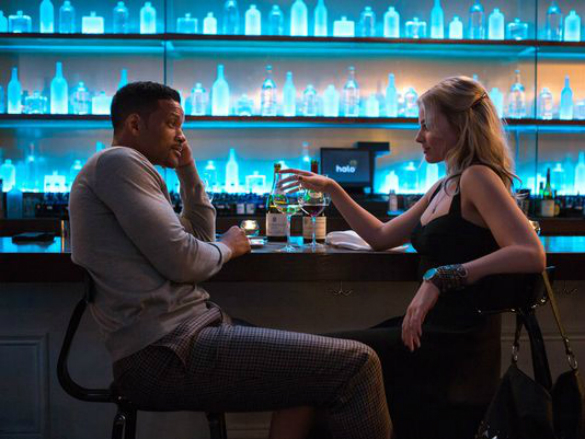 One more thrilling sequence involving a businessman and a series of increasing bets occurs before Nicky abandons Jess as soon as the job is done. It’s a move ostensibly done in order for Nicky to keep himself from getting too close to Jess. And in order for the rest of the movie to take place. But it’s a plot point that falls flat, since Nicky is at least as close to one other of the con artists, and still remains close friends with him. Granted, they aren’t sharing the same side of the sheets in the same bed, but it’s not handled as gracefully as it might have been.

Three years later finds Nicky meeting with a racecar driver, Garriga to help con other drivers with a false formula to help Garriga win. But wouldn’t you know it, Garriga has Jess hanging around his neck. There’s some great tension in their reunion that has the audience starting the guessing game: Who is gaming whom? Is anybody gaming anyone? Are they all just gaming us? It’s a tough waltz to dance, because in con artist movies there’s the pre-built expectation that there will be some grand twist at the end, and everything we’re watching is part of the long con. It’s just a question of who’s in on it and how far-reaching the con extends.

Making matters tougher for the audience to swallow, one twist already came early in the movie, revealing Will Smith’s character had been in on a con for a whole scene. So there’s a loss of trust that transpires, and when you can’t trust your protagonist or anything he’s saying or doing, there can be a loss of investment. Will Smith carries it off with his Will Smith charisma, but that distance from connecting with the main character still very much exists.

As for the final twist? It’s knotted over itself tighter than a giant pretzel, coming at the audience with at least four different twists. If you see one or two coming, there may still be one trick up the movie’s sleeve that catches you. It’s not entirely satisfying, but it won’t have you regretting the journey. Under increased scrutiny, the twists might not totally hold up. But in the con artist movie genre, Focus can hold itself up just fine. I give Focus 3 marshmallows out of 5.