Another Taken movie, another movie involving Liam Neeson kicking butt.  Who gets taken this time?  His pet hamster?  His left sock?  Either of those would be more thrilling than what ends up onscreen.  The title is more a formality at this point, with the only thing taken is the audience’s interest, until it’s squashed with quick edits into oblivion.

Neeson is back in TAKEN 3 as Bryan Mills, living a life strangely devoid of gratitude from either his daughter or ex-wife, who at this point he has rescued a total of 18 times.  Mills gets a text from his ex-wife Lenore (Famke Janssen) wanting to talk over bagels at his place, but when Mills arrives, Lenore is dead and the police show up to set off the reboot of The Fugitive.  It appears as if Mills has killed his wife, but instead of blaming the one-armed man, he runs.

The following chase scene sets the style for the rest of the movie.  Shaky camera work combined with quick edits ensures that not a single viewer will be able to tell what the hell is going on.  Important things like who is getting punched, or how far in distance each person is in a chase scene are waylaid in favor of close-ups of torsos and various body parts.  Whose parts they belong to, nobody will ever know.  There’s the sense that these fights and chases could be thrilling, if only the camera could stay put.  Whether it is to hide Neeson’s inability to convincingly land a punch, poor fight choreography, or interest in keeping the rating squarely in PG-13 territory by only showing the suggestion of violence, we may never know.

Forest Whitaker steps in as Detective Franck Dotzler and threatens to imbue the franchise with some gravitas, but luckily the most the movie lets Whitaker do is play with a rubberband and chess piece without explaining why he does either.  Maybe we’re supposed to take it as detective shorthand for his character being quirky but intelligent.  Also, Dotzler’s greatest revelation comes in the form of eating the bagels at the crime scene.  As he explains to Mills at the end, he always knew he was innocent because why would a guy about to kill his wife buy bagels?  He’s channeling Columbo in all the wrong ways. 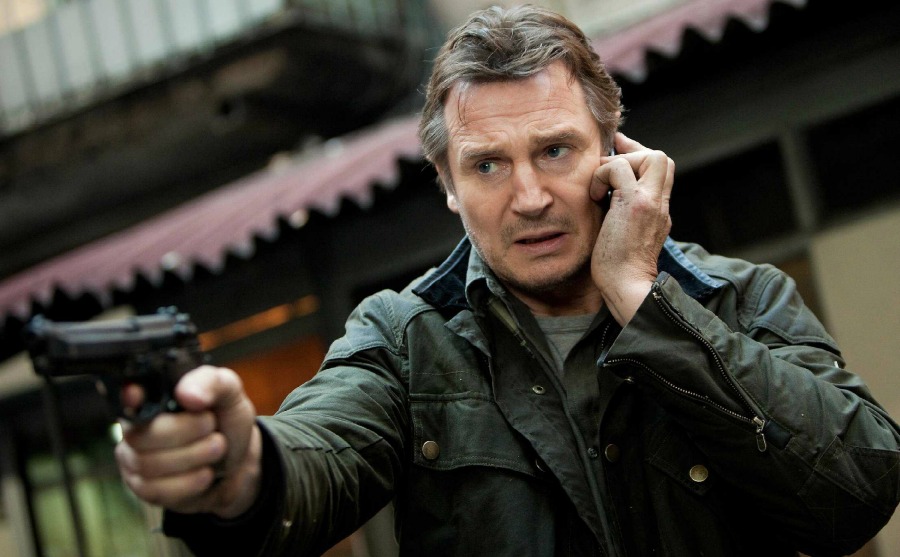 As Mills continues to evade the cops and finds out who really killed his wife, the plot brings convolution to a whole new level.  The only thing the audience has to remember is that if your ex-wife has a new boyfriend who’s Russian, and you all exist inside a Hollywood movie, there’s an 89% chance he’ll turn out to be a bad guy.  There’s enough twists and double-crosses for three more Taken movies.  Individual sequences within the movie bring their own convolution to the table as well.  One series of events has Mills’ daughter buying a yogurt that has a note telling her to drink it right away, only to have her get nauseous at school and go to the bathroom where Mills is waiting for her.  Never mind he could have written on the note where to go, or that he knew exactly which bathroom she’d end up in at the right time.  Or even that another poor girl wouldn’t come along and open the stall only to find a 6’3’’ Liam Neeson crouching on the toilet.  Though that might have made the price of admission worth it.

Somewhere within Taken 3 there’s a good movie to be found.  It just involves a movie with completely different cinematography, plot points, editing, and script.  Liam Neeson can stay.  There is more thought put into the action scenes than in Taken 2, but by no means should this be taken as an argument for a fourth Taken.  Even those looking for some simple, escapist action fare will be disappointed, as any action occurring onscreen is wholly incoherent.  One can only hope there is just one more Taken movie left in the franchise, as there’s only one family member left in the Mills family: his pregnant daughter.