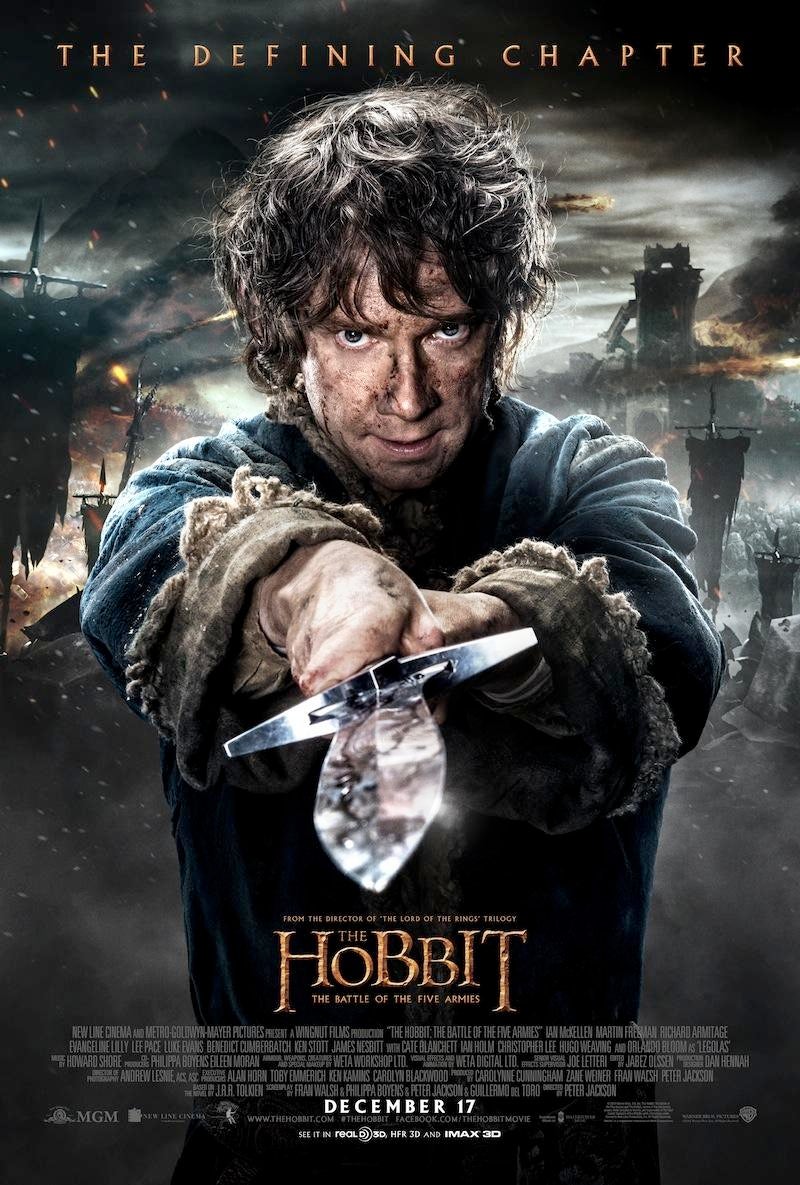 Tweetable Takeaway: The excess of the Hobbit movies comes to an end in a just barely entertaining enough fashion.
Tweet

We’re finally here.  We’re at the end of Peter Jackson’s film versions of Tolkien’s universe, first The Lord of the Rings, and now, the final chapter in The Hobbit trilogy.  That is, until Jackson tackles The Silmarillion, or much more likely, J.J. Abrams picks up the franchise for the next three movies.  THE HOBBIT:  THE BATTLE OF THE FIVE ARMIES is the weakest of the six Middle-Earth films, but still worth one watch, if nothing more than to finish the whole affair.

When we last left Bilbo and the gaggle of dwarves at the end of The Desolation of Smaug, Smaug was flying off to wreak havoc upon the lake town known as Lake-town.  This picks right up as the destruction begins.  After perhaps ten minutes, the destruction comes to an end, and the people of Lake-town want the gold that was promised them by the dwarves in order to rebuild their home.  The dwarves meanwhile have holed themselves up in the Lonely Mountain with its piles and piles of gold almost as large as the United States’ national debt.  Thorin, their fearless leader, has gone stir-crazy in trying to find the Arkenstone, a shiny stone that, if I have my Marvel Universe timeline correct, we last saw in Guardians of the Galaxy.  Thorin now assumes the role of antagonist; his character is a complete 180 from the first two movies.  In doing so, Thorin loses all relatability or empathy from the audience.  In short, Thorin goes full Noah.  You never go full Noah.  There are no shades of good or bad; he has completely become a bad guy, which leads to predictability, which leads to boredom.  He is an unmovable pillar of stubborn evil motives, no conflict, no suspense.

As the people of Lake-town approach the mountain, they’re joined by elves, who also want a cut of the gold.  Apparently there are some really shiny jewels in there that belong to the elves.  Then James Cameron comes along, apparently that giant jewel from Titanic is also in the mountain. There’s no denying it, everyone is going to go to war, but not before talking about going to war for the first third of the movie.  Bilbo and Gandalf attempt to mediate, but everyone is here to fulfill the promise in the title.

Just as the war between the men, elves, and 13 dwarves is about to begin, another army of dwarves shows up, led by an unnervingly computer-generated Billy Connelly on a warthog.  And just before that war is about to begin, some gigantic earthworms reveal some tunnels full of orcs.  But before that war can begin, a horde of mall Santas arrive on the scene, riding flying talking goats.  Okay, well maybe that last one doesn’t actually occur, but the viewer is left wishing it had.  The ensuing war between the armies continuously borders on tedium.  Now, I’m not one to ever complain about a giant war between orcs and elves or whoever, but Jackson appears to be only going through the motions this time around.  In the epic battles of The Two Towers and The Return of the King, there are multiple jaw-dropping, just really cool moments that have you leaning forward.  This time around there’s about 1.5 of those moments.  And when the entire movie is a battle, that’s at least 8 too few.

There’s also the classic prequel problem of invoking suspense when we already know the character’s fates.  At one point in the movie, Gandalf appears close to death.  Another has Legolas in a battle that adds a little bit more suspense to the mix.  But it’s curious Jackson follows characters with a foregone fate instead of ones that don’t show up for three more movies later on.  It’s also hard to stay invested when all the parties involved are just fighting over a mountain with a bunch of gold inside.  The battle is still held with the gravitas of good vs. evil found in The Lord of the Rings, but it’s a bunch of coins, for God’s sake!  Since they’re all acting the part of the greedy miser, there’s not much incentive to root for any side of the five army coin.

The movie entertains just enough to be tolerable, but one can’t help but think this final movie is just an addendum, an add-on that needed to exist because of all the other add-ons to the book’s events.  Cutting out the Sauron parts alone could easily have turned a three-movie slog into a tighter, more focused, and ultimately more enjoyable twosome.  I’m always up for investing the time in the epic journey that The Lord of the Rings trilogy promises, but I can’t say I’m too keen on reliving the journey in The Hobbit.  I give The Hobbit: The Battle of the Five Armies 2.5 earthworms out of 5.