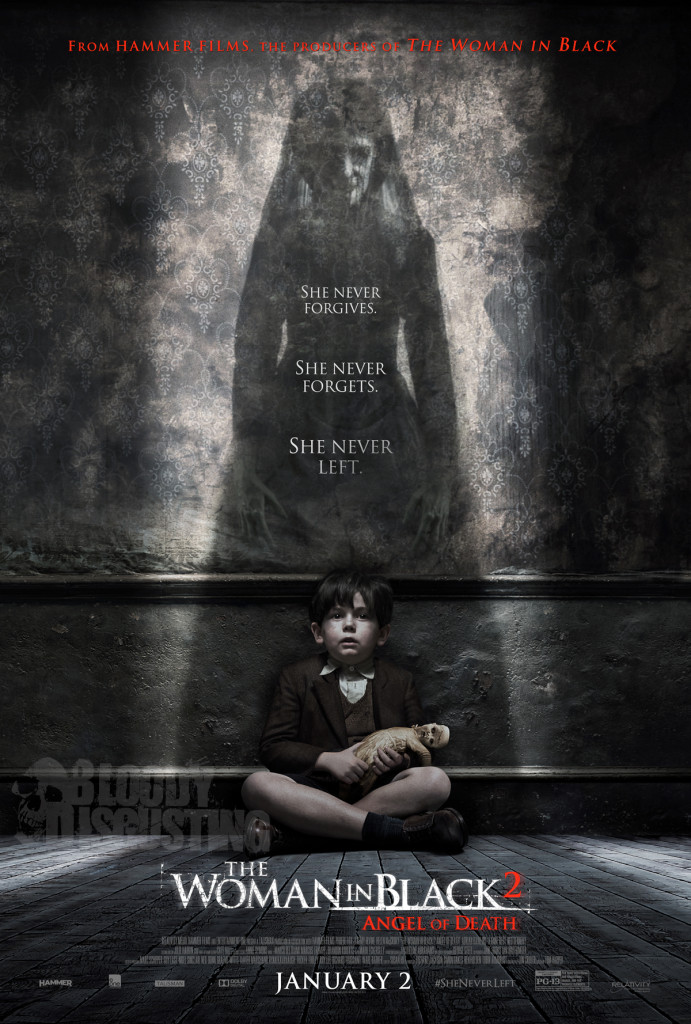 Tweetable Takeaway: Anyone looking for a $10 nap will find this movie willing to deliver on every penny.
Tweet

Nothing warms a moviegoer up in the cold winter month of January better than a good old-fashioned horror movie.  However, THE WOMAN IN BLACK 2: ANGEL OF DEATH will better serve to put moviegoers into a deep hibernation rather than provide any real scares.

The movie begins with teacher Eve Parkins (Phoebe Fox) along with a second teacher taking a group of children to an abandoned creepy house in order to avoid the blitzkrieg bombing of England in 1941.  As luck would have it, the darn place is haunted.  The titular woman in black is still hanging about the house, fixing its eyes on one chubby little mute boy in particular, Edward.  It’s never really explicit in the movie exactly what this woman of the dark garb wants.  Eve seems certain at one point in the movie that the woman wants to take little Edward to get at her, but why it wants to get to Eve, or what she wants to accomplish is continuously confusing.

It’s tough to get scared of an antagonist when its motives are never clear.  If this woman in black has an ambiguous goal, how can the moviegoers get behind the actions of the protagonist?  At one point Eve and the children run away from the house, but that doesn’t seem to work.  Eve goes back to confront the woman in black.  And that brings us to the second set of problems this movie presents.  There are no rules set for how the ghost operates either.  The woman in black seems to be able to travel anywhere she likes, at one point command a legion of dead children, and possess Edward as well.  There really seems to be no limit to her abilities, so how do we know what Eve and the rest of the children can do?  It doesn’t seem plausible that the woman in black can be defeated by any stretch of the imagination.  The one time the ghost is foiled is when the teachers and group of children form a circle and chant the prayer said right before bedtime.  Too often the movie simply feels as if it’s making up its own rules as it goes along.

The movie also offers the false promise of building its plot methodically, slowly elevating the dread instead of giving away the big scares right away, a technique practiced by at least two other horror movies in the past six months.  It’s refreshing, until one realizes that its not dread creeping in, but instead utter boredom.  There is drawing out tension, and then there’s watching a person walk through a hallway and down stairs for five minutes with nothing happening.  The balloon of suspense isn’t being inflated and popped at its apex, it’s inflated slowly, and then the air is slowly let back out until it’s a lifeless piece of rubber that the movie halfheartedly prods.

The torch unfortunately falls upon Phoebe Fox in the main role to continue the tradition set forth by the two leads in Annabelle a few months ago of crafting a bland and uninteresting protagonist.  No doubt a good deal of blame falls on the script, but even within the confines of the mediocrity, this is not a performance that shines.  Daniel Radcliffe in the previous Woman in Black had the charm of riding out his Harry Potter goodwill; here we’re left with a character that makes vanilla look like a flavor most exotic.  Even the title alone is mediocrity to its maximum potential.  Why not a woman in mauve?  Or perhaps, the angel of laserdeath?

With no set rules for its supernatural elements, boring stretches, and dull characters, there’s little to keep moviegoers invested in anything happening onscreen.  Even the tweens seeking out the jump scares will find themselves disappointed.  In the first hour the only sudden fright to be found is a raven flying into a window.  So who does that leave?  Anyone looking for a $10 nap will find this movie willing to deliver on every penny.  I give The Woman In Black 2: Angel of Death 1 deflated balloon out of 5