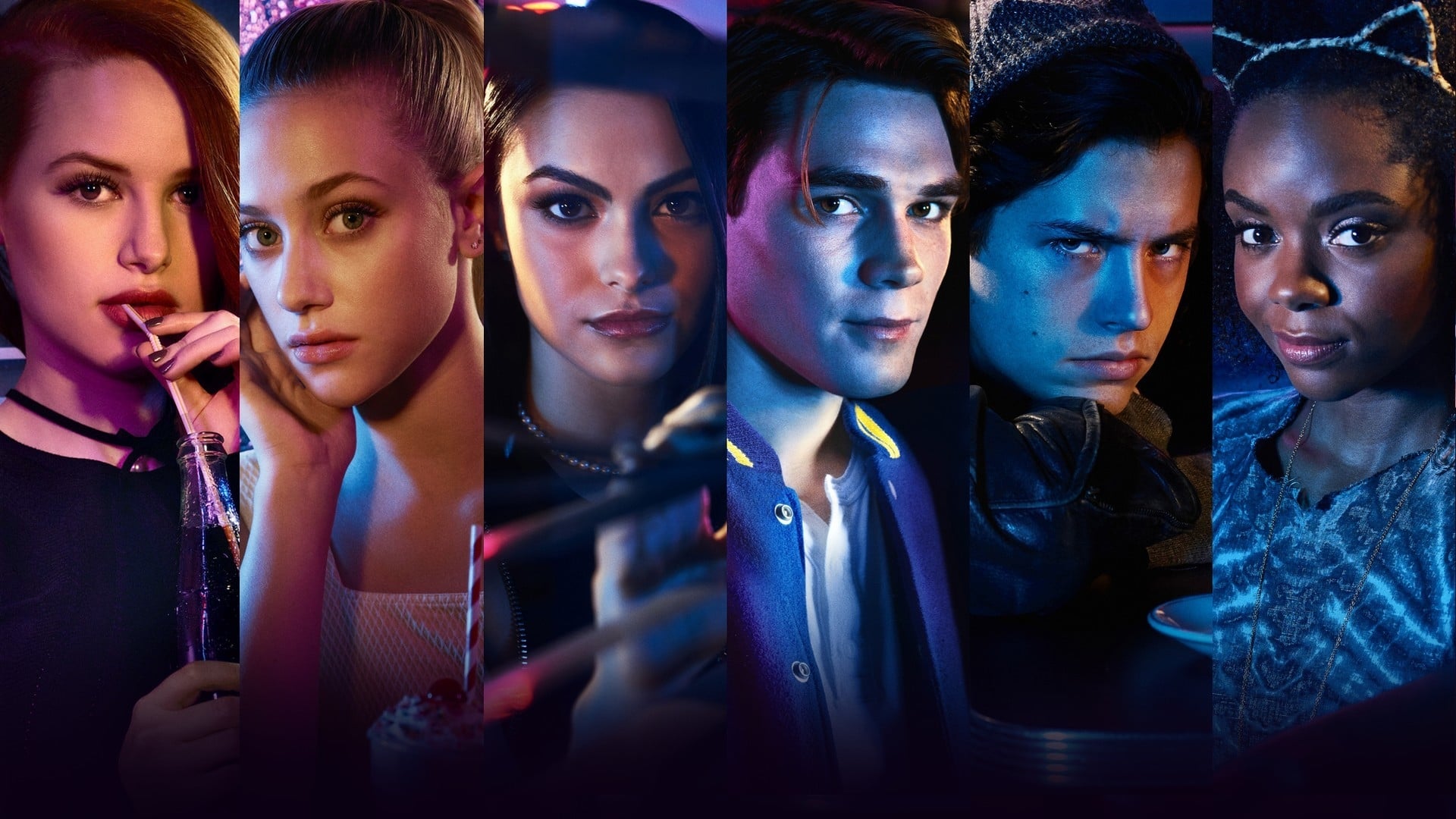 It’s red and black in this week’s episode of Riverdale, “Chapter Sixteen: The Watcher in the Woods.” This season of Riverdale seems to be shaping up to be a strange melting pot of the darkly comedic and uber serious. Three episodes in, I’m still not quite sure how to feel about it.

On the one hand, it’s of course a teenage show, and therefore entitled to its bits of melodrama, as mostly played out by Archie, who’s still a young enough actor that you can’t blame him for diving in, elbows first, in every scene. Once in awhile we get gems from Cheryl and Betty, too, and lately it’s been nonstop from Veronica as well, but Archie definitely takes the cake on melodrama, and this episode is no different. With his determination to stop the hooded killer by forming a non-gang gang he calls “The Red Circle” – which sounds like a horrible period-related women’s wardrobe malfunction – and his young, impressionable naivety, Archie manages to drizzle a little extra of that awkward ‘charm’ that really makes this show exactly what it is: awkward, cheesy, and very intriguing. 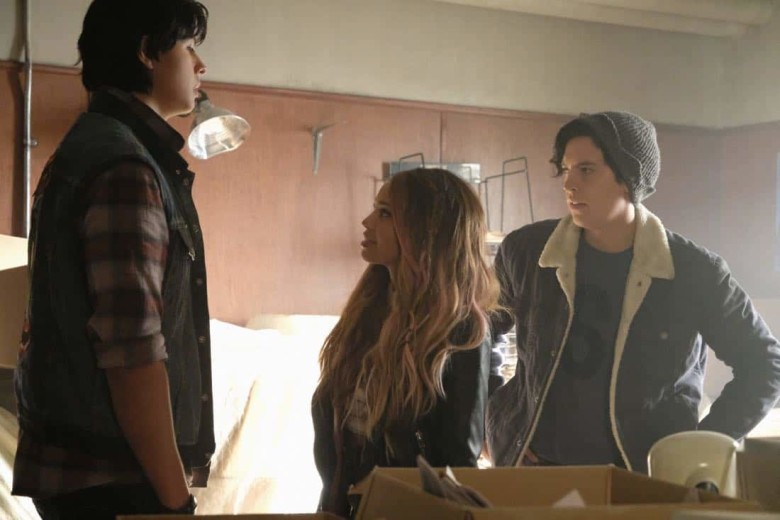 On the other hand, the show manages to explore some deep, emotional, real-world problems in a way that’s actually really relatable to its audience, despite the ridiculous names and the ridiculous drama.

I have to admit, I was really angry with Hermione Lodge when she allowed Veronica’s dad to come back into their lives. I aired my grievances about it in last week’s review. But I might have been too harsh on Hermione. At the end of the day, she’s simply a woman trapped in an emotionally abusive marriage, with a man powerful enough to take everything from her if she ever betrayed him. Her inability to keep her relationship with her daughter comes from her complete desperation to get Veronica to heed her warnings about her father and save her from the very same cycle of emotional abuse and manipulation that Hermione suffers from. When that backfires, she resorts to drunken outbursts. And, if I haven’t said this before, RIP Smithers. (We don’t know that he’s dead, it was just implied in last week’s episode.)

While all of this is silently being conveyed by the looks Hermione gives to the mirror, Kevin Keller is all up getting down in the forbidden forest. With the Zodiac killer on the loose, Betty is worried about baby KK getting killed. Instead, she wants Kevin to use Grindr “like all the other gay guys do.” Sure Betty, because in the 50s-esque, mostly white, little town of Riverdale, there’s definitely plenty of fish in the sea for Kevin to tinder a flame while bumbling around on Grindr. 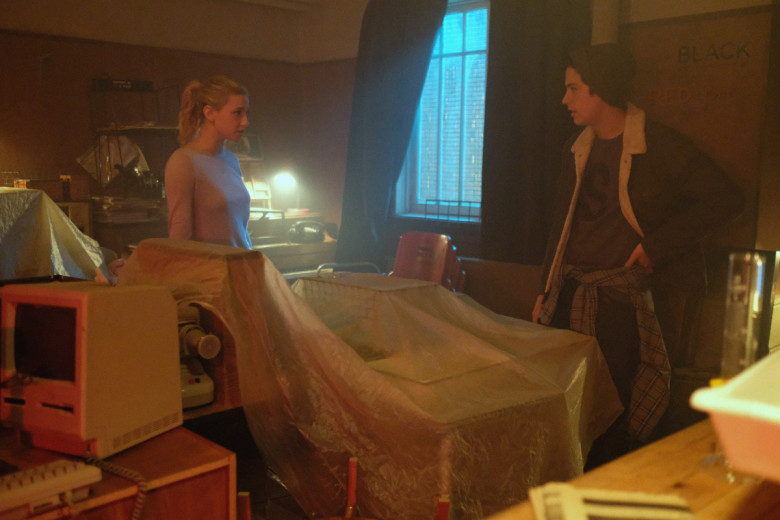 When Kevin tries to explain to Betty her cis straight privilege, Betty doubles down in that weird, girl scout morally way of hers, where, if she’d just left it alone, Kevin was coming around. He wanted to change, but he needed support, not whatever weird, misunderstood, nobly-intended interference Betty ran. It’s a good lesson for all of us, that we all need to work on gaining some perspective and becoming a little more self-aware of our privileges and how they shape the way we think about others.

Finally, on a third hand – because in this review, Riverdale is an entity with three arms and only one leg to stand on – despite the truly resonating parts, despite the guilty-pleasure “teen tripe” (as I’ve heard it once called), some parts of this show are just utterly ridiculous in a completely comical way. So comical, in fact, that I genuinely can’t decide if the writers put these things into the scripts to challenge the actors to keep straight faces, for their own whimsical pleasure, simply as a way to incorporate more the comics, or to sincerely add a layer to the depth of Riverdale. 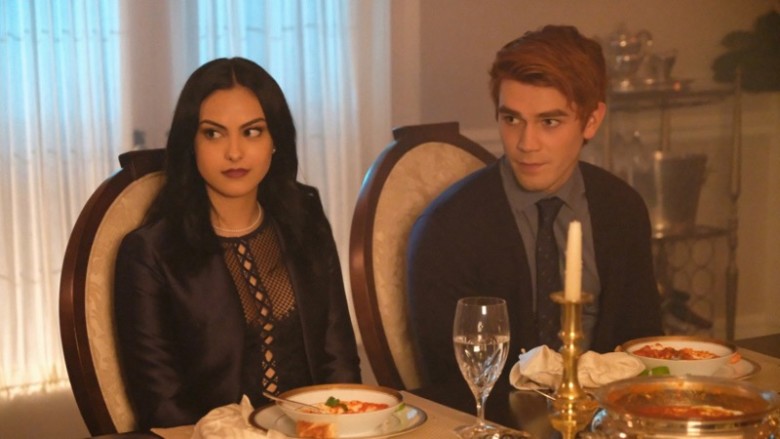 I’ve been asking and trying to find the answer to this question since “Jingle Jangle.” This episode was no different: with Jughead now attending school on the southside, he’s meeting new characters, including a girl named Toni Topaz (which sounds like the alter-ego to the pink power ranger) and the head of the Southside Serpent’s high school group, a menacing boy named Sweet Pea… Which is also what my dad called me when I was six.

But, none of that compares to the ultimate offense in this episode (I’m talking like this was such a bad episode, but honestly, it was pretty good, I promise); the final scene of the show, which – surprise surprise – is a YouTube video of Archie threatening the black-hooded figure, surrounded by what appears to be red-hooded male strippers. I don’t know, Archie probably didn’t recruit a bunch of Chippendales dancers to his non-gang gang, but that’s sure what it looks like. Why are all of Archie’s ‘menacing,’ masked friends shirtless? What’s the point in that?

Overall, though, the episode was entertaining and brought some more character study into the light while offering a tiny smidge of extra development towards our masked killer. So, the show continues to do what it does best: entertain us with a dramatic show set in a silly place with characters who live somewhere between mad and melodramatic.