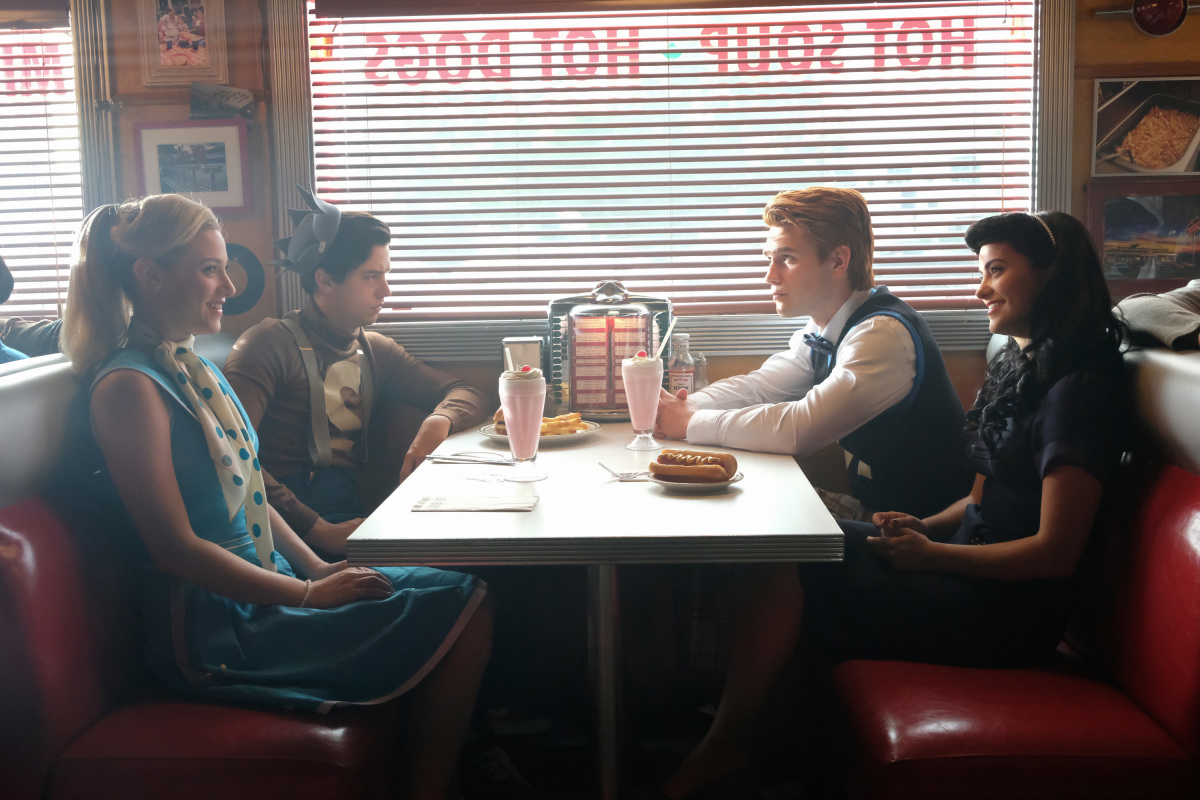 RIVERDALE is coming back, and more mystery and teen angst abound.

To prepare you for the further adventures of Archie Andrews and his friends, here’s a quick catch-up on where we left off and everything we already know about the upcoming season.

Where we left off
… with a brand new (potential) murder mystery. In the Season 1 finale, a masked gunman burst into Pop’s and took aim at Archie’s dad Fred.

Elsewhere, Cheryl burned down Thornhill and tried to take her own life after the dark secrets of the Blossom family became too much for her to handle, but she was saved by Archie and the gang, proving she has some true friends who have her back.

Meanwhile, the respective pairings of Archie and Veronica and Jughead and Betty solidified their relationships, using the dreaded s-word – that’s right, “soulmates.” Do these kids not realize they’re only in the first season of a teen drama? Has Dawson’s Creek taught them nothing?

Of the two couples, it appears “Bughead” may be in more trouble, as Season 1 left off with Jughead agreeing to transfer to Southside High and putting on a Serpent jacket – seemingly agreeing to join the gang that his father was a member of – in front of Betty, who rightfully looks disturbed at the development.

So what can we expect in Season 2?

Fred’s fate will be revealed quickly.
As the opening scene of the Season 2 premiere shows, the show is picking up immediately where Season 1 left off, with Archie racing to get his dad to the hospital, driving a car he doesn’t even have a license for yet. So, Fred Andrews is alive – for now. 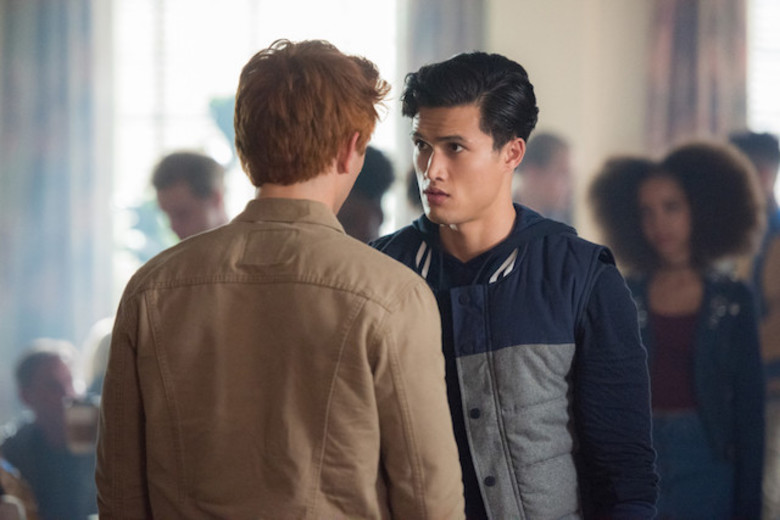 New faces, new love triangles.
Veronica’s dad Hiram Lodge is finally making an appearance after being discussed in ominous tones all season long, and will be played by Mark Consuelos. Meanwhile, Reggie is going to look different going forward, as original star Ross Butler exited the show and was replaced by Charles Melton.

Meanwhile, classic Archie comic book character Toni Topaz (Vanessa Morgan) is also coming to Riverdale. Remember the aforementioned trouble for Bughead? The actress teased recently that, “there might be a little love triangle” with her character coming into the mix.

That’s not to say it will be smooth sailing for Archie and Veronica as a new face shows up to challenge them a bit too: Veronica’s ex-boyfriend, Nick St. Clair (Graham Phillips).

“Nick is an old classmate of Veronica’s from New York, and despite his parent-pleasing veneer, he is a wolf in sheep’s clothing: a hard-partying Lothario with dark desires and an unchecked sense of privilege,” showrunner Roberto Aguirre-Sacasa described the character when he was cast. “His arrival in Riverdale will threaten Archie’s relationship with Veronica, and may even put some of our characters at risk.”

To throw even more turmoil at Betty, her long-lost brother Chic (Hart Denton) is also set to appear this season. And in the comic books he was a secret government spy, so it’s anyone’s guess how he’s going to shake up this formerly sleepy little town.

An even darker tone.
Riverdale already distinguished itself from the typical teen soap by being atmospheric and creepy with a touch of Twin Peaks and centering its first season plot around the murder of a popular high school student, but Season 2 will be even darker than that, according to Aguirre-Sacasa.

“The stakes for more of the characters are going to actually be life and death,” the EP said recently, also describing Season 2 as more of a suspense thriller than a straight-up murder mystery.

“It’s almost like a completely different show,” added KJ Apa, who plays Archie. “So much more subversive, so much more dramatic and intense.” 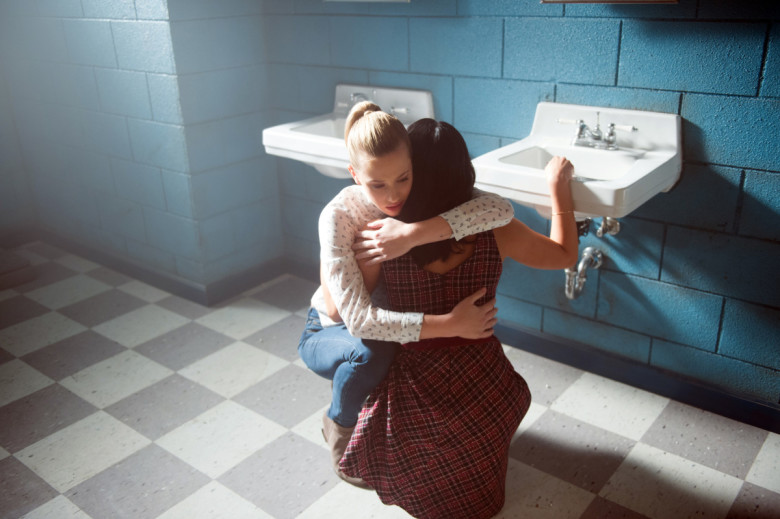 Conflict for Betty and Veronica?
The BFFs were undisputedly the highlight of Season 1. Everyone went into Riverdale bracing for a love triangle and two girls fighting over Archie, but what we got was so much better, as Betty and Veronica emerged as strong, supportive through-thick-and-thin besties. But will there be something – not a boy, never that – coming between them in Season 2?

“Episode five has some conflict,” Camila Mendes, who plays Veronica, said in an interview. “It’s not the type of conflict that you would expect considering what the comics are about, but it is a conflict because Betty has a secret and she can’t share it with Veronica.”

More romance – for everyone.
Just because Bughead and Varchie are all set up for their respective romantic dramas this season doesn’t mean the rest of the Riverdale gang will be left out. Kevin will have a new love interest following the exit of the Serpent Joaquin, Casey Cott revealed at Comic-Con, and Josie (of the Pussycats) will “bat a couple eyelashes” at the new Reggie, according to Ashleigh Murray, who dons the cat ears weekly as Riverdale’s resident songstress.

And yes, even Cheryl Blossom will have a new love interest, and maybe stop being defined by “twincest” accusations.

“I’m excited to finally get a love interest,” actress Madeleine Petsch told Forbes about what’s to come for Cheryl, adding that her new romance is “nothing that anybody expects.”

Some have speculated that Cheryl could be paired with Toni, since the character is bisexual in the comic books and executive producer Sarah Schecter has already hinted that will be explored on the show, saying that the character’s sexuality creates “an opportunity for more, different love triangles and love stories.” 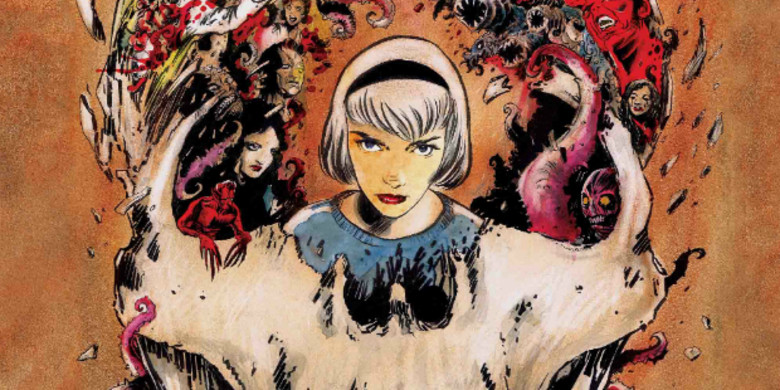 And as for Sabrina the Teenage Witch…?
She was supposed to show up last season, but for now, the iconic supernatural teenager remains ever elusive, even as the anticipation for her introduction continues to build. Her arrival could be more imminent than ever as The CW has officially began developing The Chilling Adventures of Sabrina, her own Riverdale spinoff series, but there’s still no word just yet on if or when she will show up on the flagship show. But we do know casting is now underway for the character.

Riverdale premieres Wednesday, October 11 at 8 p.m. ET on The CW.