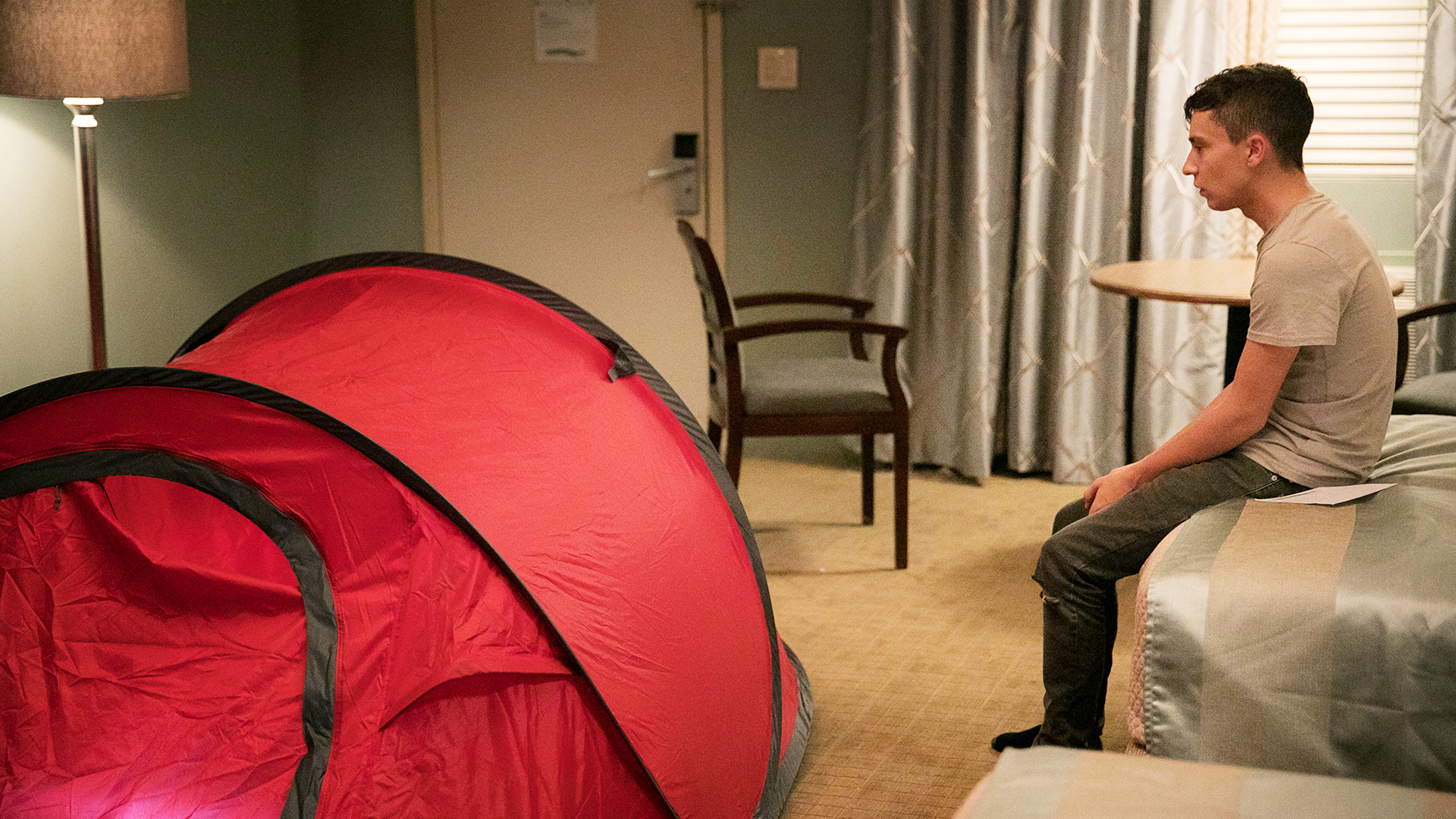 A young political dissenter Alex (Keir Gilchrist), is prepping something in a red tent. It could be a bomb.

His partner makes small talk outside, talking about the Green Bay Packers being the only community-owned pro sports team, although the San Diego Padres’ owner tried to sell his team to the public in 1984, but the MLB wouldn’t allow it.

We discover that they don’t know each other’s names.  The partner (Brian Hostenske), wearing a striped polo shirt, enters the tent, complaining of the heat. He hasn’t been able to get the AC working. The young man in the t-shirt  warns him to be careful maneuvering around the item he’s working on.

Alex showers and, nude, preps for his night. He re-enters the main area of the room, only to find an AC repairman, Steve (Hugo Armstrong) already working. Shocked, Alex sprints back into the bathroom. The repairman explains that his anonymous partner let him inside. The partner, it appears, has gotten severe cold feet about their mission and abandoned Alex, though this is left a bit vague.

Though Alex tries to call off the repairman or at least postpone his repairing, the repairman insists that he’ll just be a minute, persuading Alex to let Steve linger a bit.

The AC repairman asks if he’s in town for the convention,  Alex explains that he’s just there for the “afterparty.” The AC repairman, who’s clearly a fan of the presidential candidate in town (never mentioned by name, though we can assume it’s a Trump-esque figure based on the repairman’s anti-immigration, anti-NAFTA, and anti-gay marriage stances), begins to question Alex about the red tent. Steve assumes that Alex’s tent was the construct of his kid. Alex latches onto this seed and begins to spin a prevarication, explaining that his son is with his wife at home, but that he enjoys bringing the tent with him on the road so that he misses the kid less. It’s unclear whether or not Steve has noticed that Alex doesn’t wear a wedding band. The easy response, that Alex is going camping after his stint at the motel and was brushing up on his tent-building skills, somehow eluded Alex here in the heat of the moment. A forgivable transgression, all things considered.

Suddenly, the sound of a burner phone alarm blares from inside the tent. Alex darts inside to fix it, while Steve, trying to be helpful, offers to fix it, saying he has prior experience as a phone repairman. The proposed assistance is innocuous enough, but it terrifies Alex as he tweaks the burner phone, a crucial element of his home made bomb. He is able to make the adjustment and returns to greet Steve outside the tent, still repairing the motel room’s AC unit.

Calming down a bit, Alex posits the question at the crux of the entire episode to the AC repairman: “If you had a time machine, and could prevent Hitler from being Hitler, you’d do it, right?” The repairman initially says that he would kill Hitler.

The repairman proposes a counterargument — what if killing Hitler didn’t prevent the deaths of 6 million Jewish people and 5 million others? Hitler himself wasn’t personally responsible for murdering all those innocent civilians, his disciples were behind the violence, technically. What if Hitler’s violent message was going to get through anyway?

The parallel of course is clear. Would killing this Trump-ian candidate figure prevent his message from being conveyed? Would his murder, by bomb (which would kill many innocent people by proxy), be justifiable? Alex ponders this for a while. Steve the repairman rescinds his initial answer, and elects instead that he might let Hitler live, rather than have a man’s murder on his conscience.

They share a bottle of whiskey from a flask Alex has been nursing to quell his anxieties. Steve insists on getting his in a separate cup, in the name of hygiene. Alex relates that it derives from his friend’s homemade batch of Kentucky bourbon.

Steve takes a call from his wife and steps outside. Jared scrambles back inside the tent, carefully removes the bomb and stuffs it inside a suitcase, then dons his convention attire — a suit and a tacky patriotic tie, plus a “Convention Access” passport — and slicks back his hair. Alex is locked, loaded and ready to go.

The AC repairman mentions that his son Jared, part of a school group attending the convention, was invited to the same afterparty Alex plans on patronizing. This sends Alex anxiously scrambling back to the latrine, where he splashes water on his face and glares at his reflection for a while.

He returns and makes for the door — but Steve has finally fixed the air conditioner. He insists that Alex stand where he’s standing (Get it? You get it) to properly feel the air conditioner’s effects. Alex, running a bit late for the after party, nevertheless honors this request. They sit together, eyes closed. Steve requests another swig from the flask, and Alex preps Steve’s cup — but Steve, now trusting Alex, drinks straight from the bottle. We close on Alex, ruminating pensively.

Directed by Anna Boden and Ryan Fleck, the writer-directors of the great movies Half Nelson (2006) and Sugar (2009), “Red Tent” stands as an intriguingly ambiguous entry in the Room 104 oeuvre. The episode itself is skillfully made and engages us in a challenging and intriguing conversation with capable performances and good pacing. But its open-ended resolution (a recurrent theme in the universe of Room 104) left this critic wanting.

Will young idealistic Alex take out this Hitler-esque candidate? Or will Alex’s now-humanized opposition, in the personage of Steve and Steve’s progeny in attendance at the convention, convince him to not risk unnecessary superfluous bloodshed? As is typical of Room 104, “Red Tent” opts to end here, rather than actually answer that question. But that choice actually works, because the characters are all hypothetical figures, really. They exist to pose this question to the viewer — how different are all of us, really?

My answer, though, is that we’re all quite different. Trying to dress up the cruel, genocidal instincts of the alt-right into the personage of a congenial repairman feels somewhat like a cop-out. Just because some Hitler supporters may have been decent air conditioning repairmen, does that make the hateful bile they spew any less wrong?