“Night One” of ROOTS brought us from West Africa to Virginia. Tuesday night’s episode, meanwhile, brought us to the next generation. That’s quite a distance traveled. But while night one mostly felt well-paced and plotted, night two feels almost too jam-packed with action. This time we begin in the midst of the Revolutionary War. Kunta is yet again on the run, but when he’s confronted by the British, he convinces them to let him pass. However, this means that he has to fight for them. Kunta actively questions whether he should fight for the same people who enslaved him, and has a number of great one-liners. He shares some of these zingers with his new slave allies who are also fighting for the British in exchange for promised freedom. But he also directs some of these at the Redcoats themselves. It’s great to see a slave character so active and so bold, resisting not just with his body but also with his mind.

Of course, the British promise for freedom is a lie, and the slaves are forced to take a bridge without any guns. A heroic and yet doomed task that reminded me a lot like the end of Glory, where there’s a lot more at stake than just the immediate battle. Kunta finds himself back in the clutches of the Wallers, but not before his foot is cut off, presumably choking off his spirit (not to mention ability) to run. 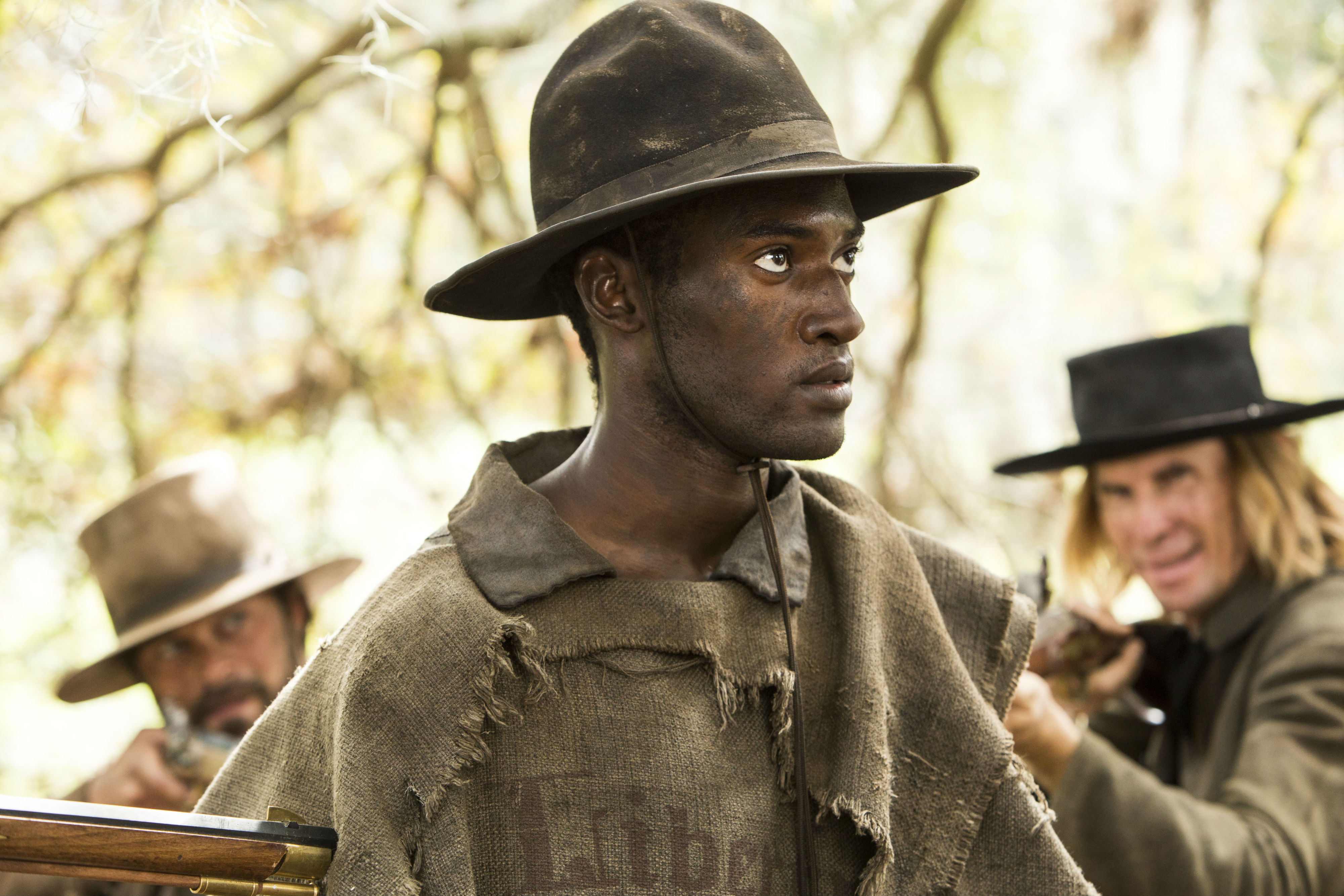 Kunta is nursed back to health by Belle (Emayatzy Corinealdi), who is patient and yet firm. Kunta has lost desire to live but Belle won’t let him give up. It’s a beautiful pairing and it’s not long before the two are married. The new couple bear a daughter, Kizzy (Emyri Crutchfield), who becomes close with Missy (G. Hannelius), the Wallers’ daughter. Kizzy and Missy develop a friendship, but it’s a mangled one, too. For instance, in the midst of innocent play, Kizzy has to fetch Missy lemonade, before going back to the fun. Underground also explores similar themes in my favorite episode of that show to date, but Roots also has insights about how otherwise natural childhood friendships are marred by this unnatural system. Though initially disappointed about having a daughter instead of a son, Kunta passes along all he knows to Kizzy. He teaches her how to ride, how to fight, about about her ancestors. Kizzy also learns how to read from Missy and passes along some of that knowledge to a romantic interest, Noah (Mandela Van Peebles), who’s eager to escape like Kunta.

A storm brews, threatening to swallow up the entire Waller plantation. This was probably my favorite sequence of the Roots reboot so far. The forces of nature affect not only the nuts and bolts of the story, but also work in a more symbolic sense, too, like in Zora Neale Hurston’s Their Eyes Were Watching God. When the dust settles, Noah is gone and Kizzy’s literacy is uncovered. Relationships are damaged, including Kizzy and Missy’s, as is the plantation itself. Kizzy is sold away, while Kunta and Belle are left behind.