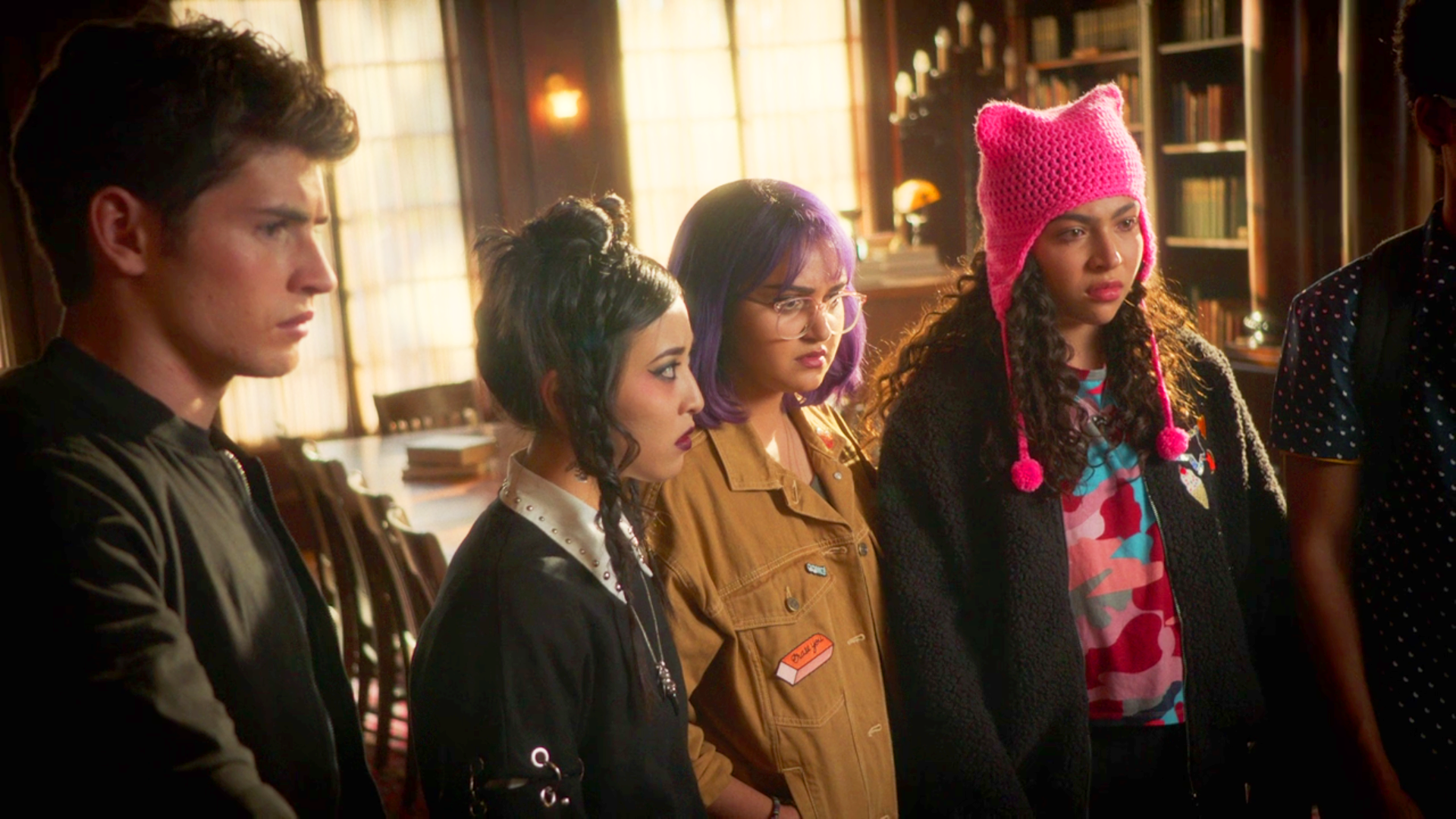 It is truly impressive how well Runaways balances all of its pieces–a trend that continues expertly through “Doomsday.” There are the adults who are in over their heads with shady alien-man Jonah. The kids are all trying to stop their parents from destroying the world, and in doing so they all discover they have some kind of power. On top of having evil parents and superpowers, they also have more traditional teenage troubles that naturally flow from their individual characterizations. They’ve all got abandonment issues, depression, relationships, cliques, and host of other problems to deal with and yet those problems flow effortlessly with the rest of the story rather than being forced or artificially becoming the focus of the narrative. I love this show so much.

The basic premise of this episode is that, even though Chase destroyed the evidence they were going to use against their parents in the previous episode, Molly’s video gives them enough information that they know Pride is essentially trying to destroy the world. They all use a school dance–the quintessential teen-film climax–as cover for trying to stop whatever Pride is planning in a great riff on genre convention. 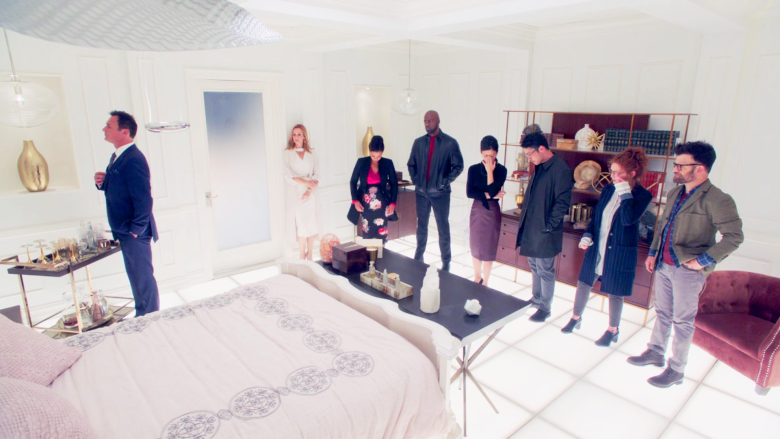 The biggest twist is that clueless Frank, Leslie’s failed movie star husband and face of the Church of Gibborim, betrayed Karolina’s trust and has thrown himself in completely with Jonah. Karolina tried to enlist Frank in helping her and her friends take down Pride, but instead he took what Karolina told him immediately to Jonah in exchange for power and influence. He’s still playing Karolina like he’s on her side but I suspect he sold out everyone but himself to Jonah. Frank has been portrayed as useless and bumbling since the beginning and I did think he was actually kind so his sudden turn genuinely shocked me. I’m at the level of jaded where I can see most twists coming so I find it impressive when my expectations are undercut at this point. There were a few other big surprises as well. It turns out that Leslie is more evil than anticipated and Tina is much more sympathetic. It’s still unclear what Amy was up to that got her killed or who it was that knew about her hacking Wizard, but Tina is no longer the main suspect in her death. My other favorite thing amongst the members of Pride is that Stacy is a beast. She cusses out Jonah and openly defies him even while her husband keeps trying to appease him. I’m sure it surprises no one who knows anything about my MCU obsession that Dale and Stacy are pretty much my favorite thing in this show. I love all the scientists and these two are fierce, silly, and brilliant all at the same time. I mean, why would it even occur to anyone to make themselves a guard dinosaur?

I’ve got a theory that one of the reasons this show can balance all of its pieces so well is because of how each episode is structured. There’s always a mystery or goal related to the over-arching sci-fi themed plot that is the backbone of the episode but in the course of working towards that goal each character encounters some kind of personal crisis that complicates things. This episode did well with all six of the teenagers in that regard. Molly brought the VHS tape to her friends and learned that her parents were good people who loved her while they also all got more information about what Pride is up to. I loved the cold open that suggests how Molly got her powers as well! Alex and Niko are still trying to figure out what happened to Amy while Niko also completely refuses Alex’s romantic advances. Gert and Chase–the quintessential nerd and jock–have both reached points in their respective journeys where they can admit their feelings for each other. Meanwhile, Niko and Karolina also have a moment that’s finally possible thanks to Niko’s clearer interpersonal outlook and Karolina’s life-and-death desperation. I legit hate 99% of romantic relationships in fiction and every single one of these made me wrinkle my nose in delight. Even if this show had nothing else going for it, such excellently written romances and realistic familial issues are a huge weight in its favor. 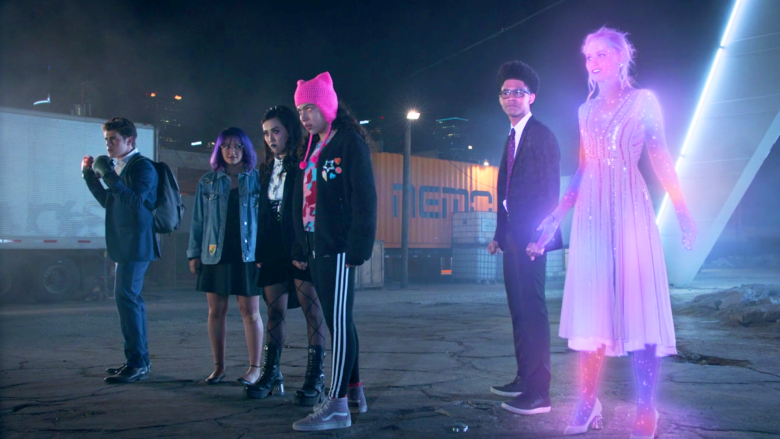 Also, I doubt this will crossover, but currently Agents of SHIELD is set like 70 years ahead in a future where the earth was destroyed by a massive seismic event. They’re claiming that a SHIELD character with earthquake powers is responsible, but Runaways is giving me another perfectly legitimate reason that the world could have splintered into a million pieces. If a ridiculously bad season of SHIELD is actually caused by how awesome Runaways is I’d definitely be inclined to forgive the first show a lot more simply on the virtues of the second. Frankly, too much is financially at stake at the film level of the MCU for anything but Thanos to be the reason the world is destroyed, but I still love it when the television shows get to play around a little.

There is only one more episode of this show! No! That’s the only thing I’m upset about, but the limited number of episodes is probably a contributing factor to how tightly written the series is on the whole so I’m not going to bemoan the length too much. As a penultimate entry in this season, “Doomsday” excels in every plotline and on every stylistic front. The different stories come to a head, all the opposing forces are poised for major confrontation, and each character got plenty of attention and development. Through nine episodes I’m still solidly impressed with Runaways.