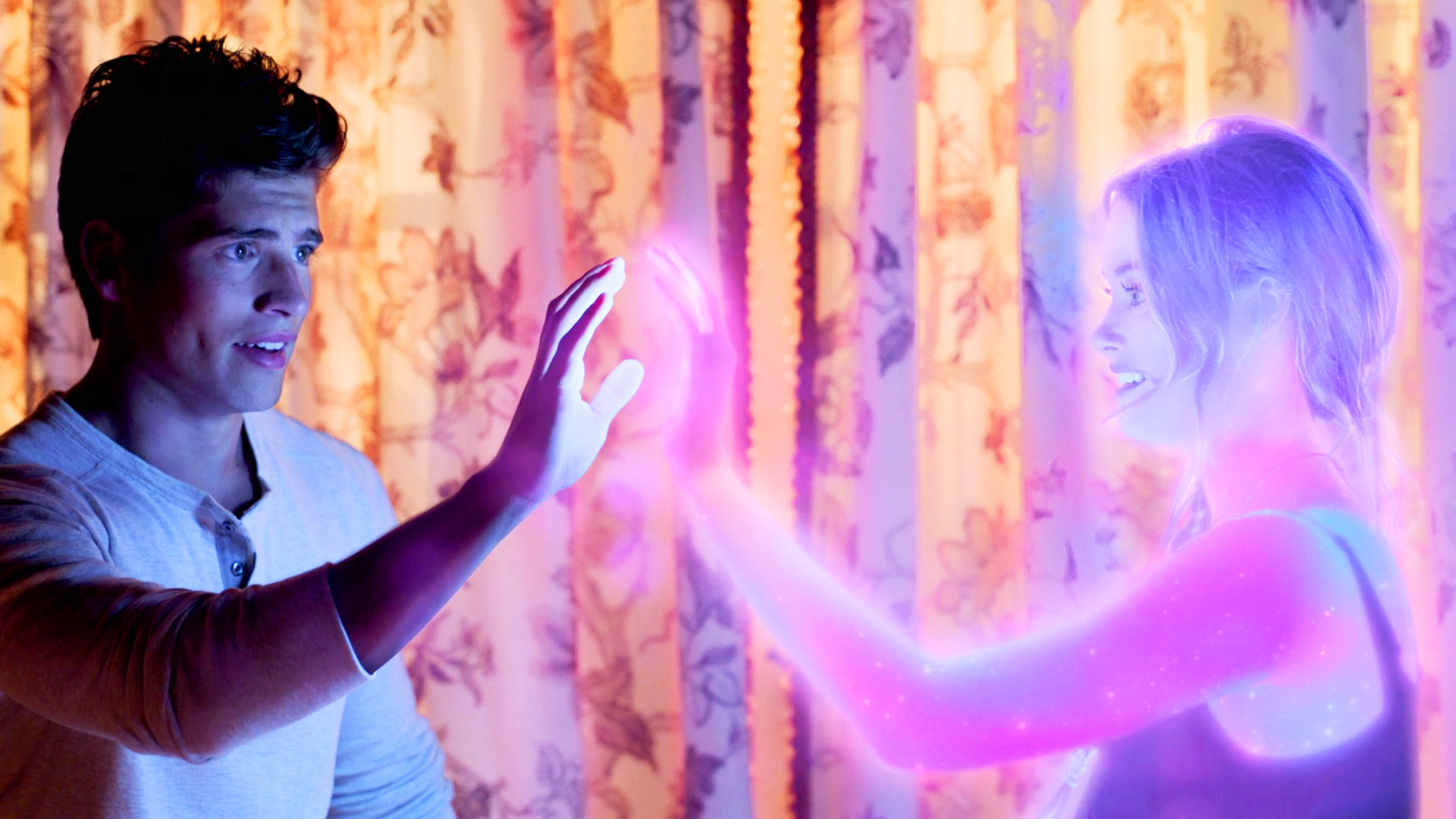 I’ve spent the past week trying to get everyone I know to watch Runaways. So far, no takers, but maybe I should stop selling it with “it’s so cute, and their parents are all in like a devil cult!” The fourth episode, “Fifteen,” continues the wonderful mix of cute and dark that made those first three episodes so enjoyable and moves the story forward on every front.

I’m genuinely impressed with how well this series balances the storylines of six kids and their parents, gives everyone equal time, and manages to make each character fascinating in their own right. It would be enough of a feat if it was just the kids who were interesting, but all of their parents are fully realized characters as well. On top of everyone having their own stuff to deal with, the interactions between all of the characters are tailored to those specific people. Karolina and Gert’s relationship is completely different (but just as rich) as Karolina and Chase’s or Chase’s and Gert’s for example. With a story that’s crammed so full of characters, it’s an accomplishment that it doesn’t feel overstuffed. Not a single piece of this show is lazy and all of that effort shines through.

All of the kids have various goals in this episode and a lot of them have multiple ones depending on who they’re teamed up with. That said, I’ll focus on what I think are the coolest bits, but keep in mind I’m undoubtedly neglecting so many other things. The two whackiest tales belong to Gert and Karolina. While the two of them are trying to exonerate their parents by digging up evidence they hope will prove their innocence, they also both (separately) figure out they have some kind of superpower. Gert can control a genetically engineered dinosaur that her parents created as a guard dog while Karolina glows and sparkles when she removes her church bracelet. Both of these things happened before, but the girls get to explore their powers in somewhat safer and more controlled situations this time. In addition to their powers, Karolina learns that her mother seems to be preying upon runaways that end up in her church while Gert’s anti-patriarchy club unexpectedly has people show up to the meeting. Gert forgot about it completely but I hope it keeps coming back up because her blatant social justice crusading is one of my favorite things. I’m also curious how the politics of our world fits into the politics of the MCU. Niko previously mentioned the Obama administration and Gert’s club members were wearing modified Clinton campaign shirts. One could argue Obama served one term in the MCU before Ellis was elected (possibly post-Avengers) but that’s a side-rant for another day. 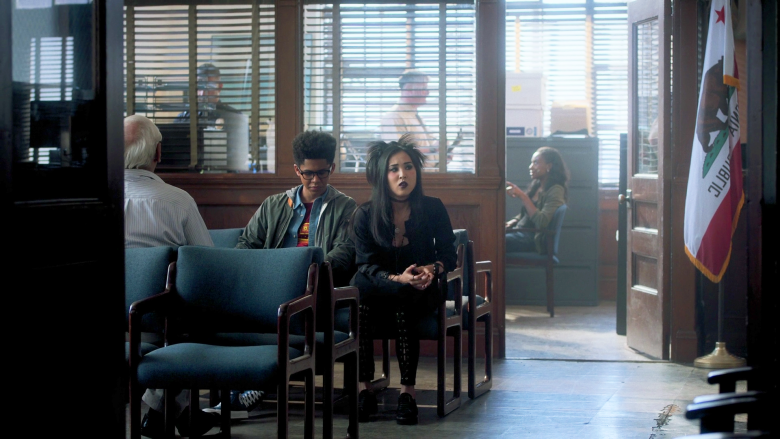 Niko and Alex spend the majority of this episode together working on a variety of things. Firstly, the cold open showed Niko finding her sister Amy’s dead body the morning of her alleged suicide. Niko becomes convinced that their parents killed Amy in one of their cult-like ceremonies and she and Alex team up to take their information to the police. While there, they discover that their parents have the police in their pocket and there’s no use reporting anything because it would likely only endanger them. Alex and Niko clearly have an attraction but it’s very low-key and more grounded in their friendship than in any prescribed notions of romance. I like that sort of thing. The two of them trying to navigate a world together that’s suddenly fallen out from under them is heartwarming and it allows whatever their relationship is time and space to grow. Gert also gets Alex an encrypted file from Karolina’s mother’s laptop and Alex and Nico crack it to try to figure out what the weird church has to do with the crime they saw all of their parents commit. They don’t have much time to work on the case though, as Alex is kidnapped by unknown people for unknown reasons right at the end of the episode. That’s a great hook for the next episode as it provides even more mystery and a clearer goal for all the teenagers than “find out what’s happening.” Now they have to find Alex while we figure out who is responsible and why they did it.

The two who are fairly removed from the action this episode are Molly and Chase. Chase quits the lacrosse team because he doesn’t want to be associated with date rapists and when he goes to tell Karolina what happened she asks him to help her with her sparkle situation. His quitting lacrosse also gives him enough time to work on his engineering project. His father discovers the gauntlets that he’s making and immediately sits down with him to help him work on them. His father is such an authoritarian jerk that I don’t have much hope for that being a decent relationship, but if the two of them have something to connect over then maybe things can be halfway okay. Additionally, his father seems to be completely losing his marbles–seeing things that aren’t there as if they are and vice versa. I love it, but I’m a James Marsters fan of old so I’m possibly bringing some of that latent love into the equation. The last of the teenagers to discuss is Molly. Molly’s super strength is the most blatant power right now and she’s handling it fairly well. Her real conflict here is that she’s trying to figure out what she wants to ask Alex’s mom about her parents. The list of questions she writes up is hilariously blunt with things like “did either of my parents have super-strength?” and “did they do experiments on me?” Those are my exact questions too, Molly. You get it, girl. 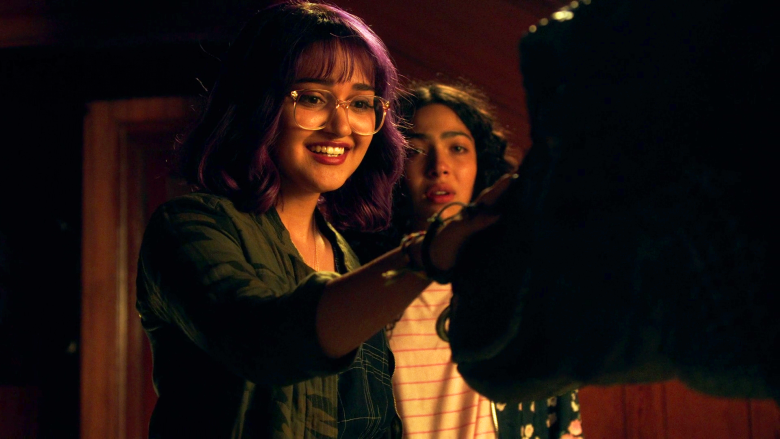 The only other big plot development not related to the teenagers is that the Yorkes (Gert and Molly’s parents) are trying to run away from the Pride and Niko’s mother Tina indirectly threatens them. Tina also hired a white supremacist thug to do some kind of unnamed dirty work and it’s unclear if that’s to kill the Yorkes, kidnap Alex, or some other crazy thing. A lot of scheming goes on amongst these people and it’s definitely fun to watch them all navigate it. To be honest, some of the characters are presented as so evil and domineering that I’m genuinely hoping they turn out to be nice-ish but motivated by some kind of unknown danger. Tina, Chase’s dad Victor, and Karolina’s mom Leslie are probably the most devious ones. Tina, in particular, is framed as hardline evil, especially in contrast to her sweet husband while Leslie is automatically suspect as the head of a nutty religious cult. Clearly there’s more to all of these people and I like the way the show is teasing us about it.

It would be hard to choose a favorite here because I love everyone and everything about this show. It’s a testament to the care and attention that the entire creative team has put into this series that such an eclectic mix of high school stereotypes and murderous occult parents all have an equal measure of empathy and interest. I like the murder mystery aspects of this series; I like the mysterious superpowers and teen tribulations; I like how naive it is without being shallow or dismissive. Tonally, this series is on the more light-hearted end of the spectrum but it’s still allowed to be serious and deal with difficult subjects. Taken all together, the strange mix of elements makes Runaways enjoyable and thoroughly unique.