It was only a matter of time before RUSH HOUR finally wrapped up its Quantou storyline. Problem is, the show waited until its last episode to do most of this work, resulting in what feels like a rushed treatment. Moreover, in the intermediate episodes, certain things that were set up weren’t really followed up on. Lee and Carter once vowed to take down the Quantou gang, even if it meant crossing a line. However, apart from bugging an apartment that doubles as a gang meeting location, we don’t get any other instances of our Detectives taking steps to close in on the crew that seems to have ensnared Lee’s sister, Kim.

In Rush Hour’s series finale, “Familee Ties,” these serialized elements return with a splash. Or better put, with gas. At a bank downtown, a teller tries to charm his female coworker. Apparently he asks her out every Friday, and this Friday is no exception. Just as she politely declines, bank patrons around them start collapsing. Before the teller can make sense of anything, his crush is out cold, too. When he too succumbs to the gas, a bunch of masked robbers enter and clean out the bank.

A little while later, the Quantou start showing up at the doorsteps of prominent gangs around the city. They rough up a few henchmen, and then leave bags full of cash along with a note attached. An invitation. 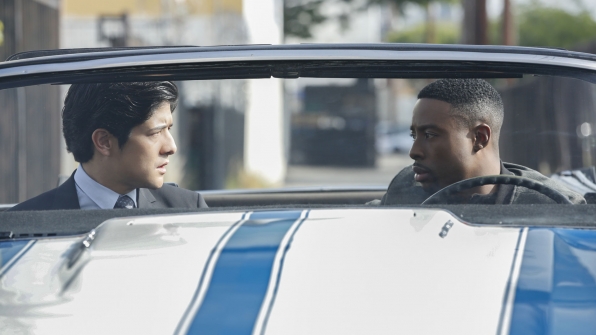 Detectives Lee and Carter are called in to investigate and a lead takes them to a hip cardio studio, where a woman says that she was with a Ukranian gangster. Back at headquarters, Captain Cole reveals that they’ve gotten hits on the stolen bills from other gangs. This doesn’t really add up, though, since it’s not likely that these disparate gangs would work together to pull off a heist. As Donovan puts it, “it’s like the cantina scene in Star Wars… an array of different races and species, all coming together in one intergalactic watering hole.”

Thankfully, it doesn’t take too long for Lee and Carter to realize the Quantou are behind this, and security footage hints that Kim might have been part of the heist herself. Carter and Lee continue their illegal wire tapping, and discover that the Quantou are planning a summit of all the biggest crime lords in the city. The Detectives confess to Cole what they’ve been doing, who’s a mix of skeptical and upset. In the very next scene, though, oddly, she storms into a CIA office and demands a seat at the table. She’s rebuffed and told that she’s not a part of this investigation. Later at a bar, Cole reveals that Kim is working undercover as part of a joint international force. 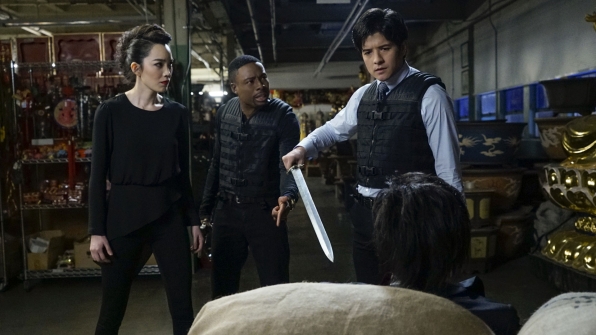 Lee and Carter track down Kim who acts as her usual uncooperative self, shooting the wheels of Carter’s beloved car. The summit begins in a huge warehouse in a desolate section of town. One issue I had with this sequence is that the various gang leaders just waltz into that warehouse, and hand over their guns at the door without much resistance. Inside, the Dragon appears and basically tells these gangs that the Quantou are taking over the city. Without their arms, the other gang leaders aren’t exactly in the position to negotiate.

The episode does get a shot in the arm late when Lee and Carter corner a Chinese agent who was at the CIA earlier, and now strangely has some of that stolen cash in his possession. The agent sold Kim out and told the Quantou that she was a spy. This really solidifies why Lee and Carter have to find the location of the summit and fast. When Carter and Lee do locate the warehouse, Lee is at his most vengeful. The Dragon reveals that he killed Lee’s parents and Lee draws his sword. In the end, Kim puts a sword through the Dragon’s chest, ending his reign.

After the Quantou storyline is wrapped up, Lee and Kim finally reach an understanding, and Lee finally seems to be at home with Carter, Didi, and the rest of his new L.A. friends.