There used to be a time when I got on RUSH HOUR for letting its more serialized elements go by the wayside for too long. Yep, I’m talking about Lee’s sister, Kim, and her interesting turn to the darkside with the Quantou gang. Since Rush Hour’s return from hiatus, though, the show has pretty much stayed in the procedural lane. Now, with one episode remaining in the series after this week’s “The Dark Night,” I’m hoping we’ll see a satisfying conclusion on that front.

Anyway, this episode is another case of the week. Luckily, it’s a pretty interesting one that features a disgruntled genius professor seeking revenge. It all starts when a televangelist gets caught on camera in between the sheets with two women. The not so pure man has ties to the mayor and so Lee and Carter are brought in to investigate who might want to embarrass him. It wasn’t really believable that Carter and Lee would be assigned to a case like this, but thankfully things get messy fast. When the televangelist maintains his innocence in front of his congregation, he’s gunned down from his perch. Our Detectives pounce on the gunman and have him in their clutches. As soon as they’re outside, though, that gunman is taken out from up above by a sniper. This quick reversal was one of the best and most surprising of the series.

Prior to being gunned down, the televangelist received an email to “accept his guilt.” Obviously he did not. Other than that, though, Didi and Donovan don’t have much to provide our detectives. The first gunman did place a call to his girlfriend in Redondo Beach. The two head down to the beach to investigate. Carter sees a suspicious man in a mechanic’s uniform talking on the phone by a circuit breaker. The man flees when Carter confronts him, and knocks Carter out cold. The man doesn’t do anymore than that, however, and claims that he remembers Carter. When Carter comes to, he’s in a hospital, surrounded by a concerned Didi, Lee, and Gerald.

Meanwhile, another prominent figure in L.A., this time a real estate developer, turns up on live news in only boxers telling people he’s a criminal. The developer confesses that he violated building codes to make a profit, and one of his buildings collapsed, resulting in loss of life. When the developer refuses to continue with this spiel, the mystery man from earlier gives the signal and the developer is gunned down on live TV! 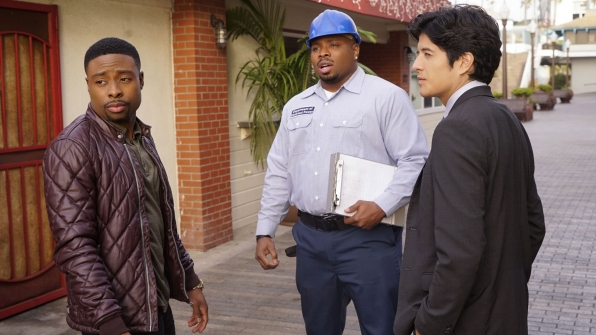 Carter and Lee enlist the help of Gerald, who dresses up like a technician and heads back down to the circuit breaker where the Detectives originally confronted the mystery man. The man takes the bait, and Carter receives a phone call instructing him to head down to the pier. When Carter arrives, he’s instructed to stay out of the way or else he won’t be spared this time. Carter racks his brain and tries to remember where he might’ve seen this man before.

Eventually Carter connects the dots and tells Lee that when he was still in his early days on the job, he rescued a man from a burning car. The man’s wife and kid, though, were killed in the crash. Moreover, the crash was caused by faulty equipment that should have been recalled, had the company not cared about the bottom line. That company’s executives just so happen to be coming into L.A. Our Detectives are finally getting somewhere. 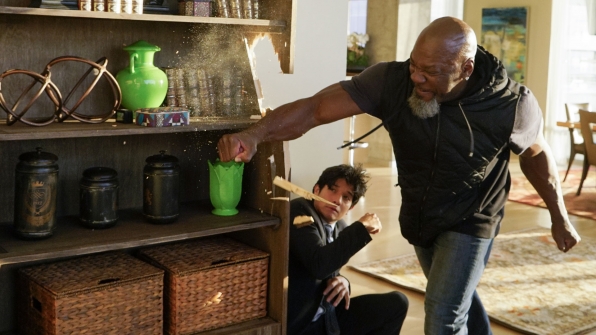 At this point, our madman professor cuts power to the entire city and ferries all the executives into a cleared out office building. The man just wants to know who was responsible for letting the defect that killed his family slide by. He douses the executives with gasoline, and interrogates them one by one. The Detectives arrive on the scene. Lee takes on the burly henchman again, and this time gets the best of him. Carter, meanwhile, tries to talk down the professor and ends up having to take him down.

With one episode left in the Rush Hour reboot, I’m curious to see how the series ends.