Tweetable Takeaway: The sophomore ep of #RushHour sends the detectives all around L.A. without traffic
Tweet

RUSH HOUR returned with its sophomore episode last night. To briefly recap the pilot, Hong Kong Detective Lee comes to L.A. to investigate the disappearance of priceless statues, and his sister Kim’s apparent death. By the end of the episode, Detectives Lee and Carter officially partner up at the LAPD and we find out that Kim is alive and likely working for the bad guys.  This week’s entry “Two Days or the Number of Hours Within that Timeframe,” largely uses a procedural framework. The ongoing mystery with Kim is touched upon, but this is pretty much a “Case of the Week”.

What’s the case? Well, a series of robbery-homicides that are ripping through Los Angeles’ swankiest neighborhoods. Yikes. One couple is just trying to watch a scary movie from the 1950s, when the power goes out. The husband reassures his wife and goes to the fuse box. Just then, several men in modern horror film masks appear and force the husband to open his safe. He obliges but somehow they still shoot him and take his nice-looking watch. (Don’t forget about this watch.) The wife’s hiding in a pantry and leaves when she thinks the coast is clear. But it’s not. She screams and the next thing we know we’re hearing Detective Carter’s screams, too.

Carter’s wails are for a different reason, though. He’s in a top down with his partner Lee, enjoying the California sunshine and the beautiful women in the city. This is a funny transition, the kind that feels straight from the Rush Hour movies. I noted in the pilot that a lot of that humor was missing. I still think Rush Hour the tv reboot needs more of these moments.

Back at the precinct, Captain Lindsay Cole briefs her team on this string of robberies and killings. Lee and Carter hit the town to investigate and soon run into a hooded man. Literally, their car hits him. They give chase and Carter corners him first. Good thing, too, because it’s his cousin Gerald. Not only that, he’s wearing the watch that our masked robbers stole! No way Gerald’s a skilled robber and killer, though. The fact that both of our detectives have family members who flirt with the other side of the law has potential. But why is Carter so keen on helping his cousin stay clean?

Gerald is taken into the precinct, but Carter has no intention on letting his cousin pick up his third strike. Carter gets Gerald out on the “48 hour rule,” hence the name of this episode. Obviously, there’s no real rule, but that’s what Carter tells Lee to explain why Gerald is now part of their crime-solving team. At the precinct, Gerald mentioned a watch dealer in Venice. Gerald’s story has plenty of holes, but it’s a lead, and it just might help Carter get his cousin off the hook, too.

Gerald’s lead is a dud, sending our crimefighting trio on a wild goose chase around the City of Angels. They make it to a weird movie lot and later, an exclusive nightclub. Compared to last week’s international mystery, this week’s story feels a lot more low-stakes. What’s more, I’m not sure if it was the right choice to have Gerald be such a prominent player so early in the season. For one, he and Carter bring the same kind of motormouthed but lovable energy. It starts to feel overcrowded. And more than that, it takes away from Lee’s screen time and the dynamic he and Carter are supposed to have. We were barely getting used to Lee and Carter in the ring together, when a third character comes in breaks them up. No fair.

For instance, in that nightclub scene, Lee is told the wait in the car while Gerald and Carter go inside. In the club, Carter and Gerald immediately get separated. Carter is thrown into a lonely room by some bouncers. Gerald tries to help but fails. Finally, Lee comes in and save the day. 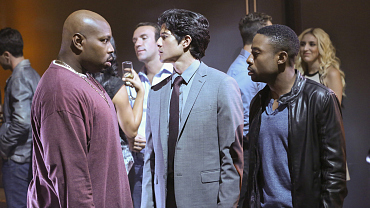 It’s at this point that our heroes find another lead, a thief named “Sticky J.” He tries to flee but Lee acrobatically swings from some chandeliers to catch up with him and stop in his tracks. Cool. They bring Sticky J outside, but it’s clear that he’s not a killer either. Sticky J actually stole the watch from the likely robber,  a blue collar guy with a white collar watch.” Finally, something to work with. Kind of.

Meanwhile, another robbery-homicide happens. Time is running out and Lee finds out that Carter lied about the 48 hour rule. By the books Lee is  upset.  There’s a break in the case when Lee realizes the homes that have been robbed might have been worked on by the same “blue collar” painter. With Didi’s help, they close in on a location. Lee is forced to fight with Gerald cuffed to him. This was fun. After the bad guys are busted, there’s also a good moment when Carter explains to Lee that Gerald took the heat for something when they were kids. This explains why he feels so indebted to Gerald.

Here’s to hoping, though, that episode three mostly features our two detectives.