Tweetable Takeaway: Carter’s smitten with a witness that he and Lee are ordered to protect on #RushHour
Tweet

Carter’s smitten this week on RUSH HOUR. P.L. or “Pre Lee,” as Carter calls it, he helped protect a witness named Nina (Janel Parrish), who used to work with Emmett Perry (Boyd Kestner), the CEO of a shady security firm. Now, months later, Nina is holed up in a safe house about to testify against Emmett and it’s up to Lee and Carter to bring her safely to the courthouse. Naturally, this isn’t as simple as just enduring traffic on the 101. As soon as Carter and Lee enter their loaner car with Nina (which Carter assures her isn’t really theirs), it gets obliterated by a drone outfitted with missiles. A fun teaser! 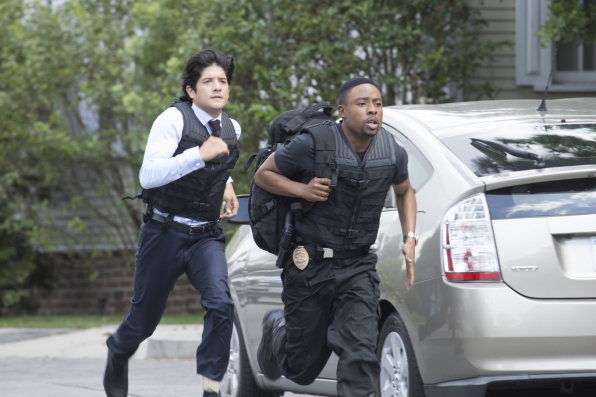 Back the precinct, Captain Cole and Didi try to figure out how someone else knew about Nina. The only conclusion is that it’s a leak in the department. They bring in Officer Donovan, a character I haven’t really mentioned much in my reviews, but who’s a steady source of solid one-liners. This week, his mustache is a “bushy badge of virility.”

Carter, meanwhile, explains the hallowed concept of a wingman to Lee, who clumsily talks Carter up to Nina. The trio makes their way to the home of a guy who Carter recently caught streaking. Yikes.  The guy lies and calls the detectives bowling buddies but his wife is too smart for that. There’s also a clever scene where Carter pretends to be a lawyer (though the funny voice he takes on sounded more like a boxing promoter to me) and gently prepares Nina for the case. Lee steps in and plays the other angle, grilling Nina without the kid gloves. Sure, this is a spoiler for Carter’s romantic aspirations, but it does bring us to an important revelation: Nina admits that she had an affair with Emmett, a married man. 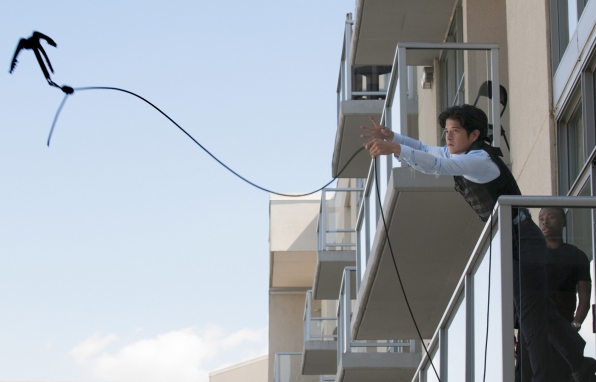 Carter, Lee, and Nina soon flee their streaker friend’s apartment via zip line. Emmett’s goons are back on the hunt. While the initial scene with the drone suggested that this episode would really play with the kind of high tech gadgetry that an underground security management firm might have, I was disappointed that the rest of the episode didn’t come back to any of this.

The pressure mounting, Nina runs away from the protection of Lee and Carter, which forces them to go after her. To make matters worse, the trail starts and the judge doesn’t seem too keen on waiting for witnesses. Flanked by his lawyers, things are looking good for Emmett. The Detectives enlist the help of Gerald, who’s a school bus driver now (a part time job). There’s a good action scene with Lee and Carter taking out Emmett’s goons with various parts of the bus. Definitely coming out of Gerald’s paycheck. 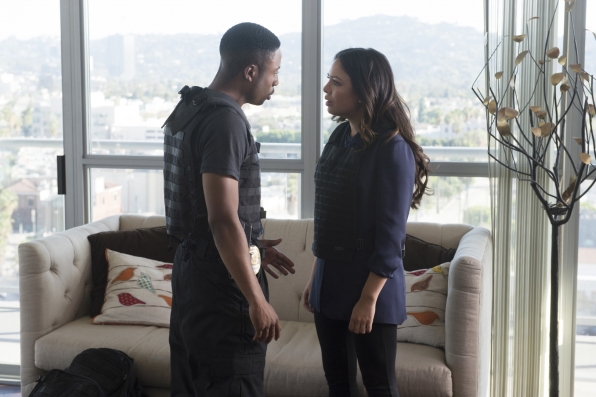 The Detectives track down Nina and realize that it’s not Emmett but his wife who hired hitmen to go after our heroes. They all eventually make it to trial and Carter breaks the case to the judge. Later, Carter tries to go 2 for 2 and asks Nina out. She’s interested but wants to get out of town for a bit. You win some, you lose some.