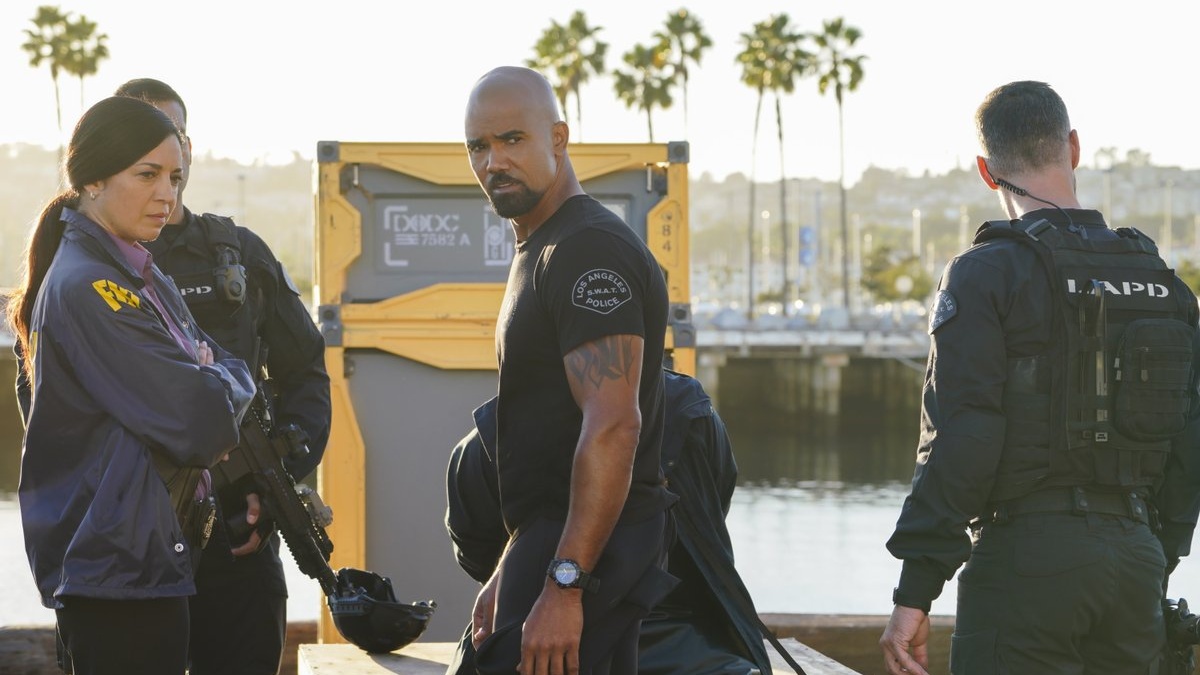 S.W.A.T. deploys to save Los Angeles from a deadly cyanide attack in “Contamination.” The “A” story is a dramatic, pressing, time clock attack that could ill or kill millions in Los Angeles. The “B” story is a mission statement that could upset Jessica’s co-workers but ultimately save lives and millions of tax payer dollars. It sounds weak because it is weak, but if you gotta, you gotta (CBS).

Hondo leads his and Mumford’s team in a Bond-like water sneak to catch a man smuggling federal contraband into Los Angeles on his commercial boat. There is a brief slick action shoot and take down sequence. The boat operator surrenders to SWAT. He was paid to bring the stuff in, that’s it, he doesn’t know any names. Usually, on non raid days, two guys pick it up. Description goes; two white males, 40’s to 50’s, driving a blue van. They find one barrel of liquid cyanide, Boatman claims he knew nothing of the cargo. If turned to gas, very lethal. This is a promising start. The FBI needs to know where the three missing barrels are. 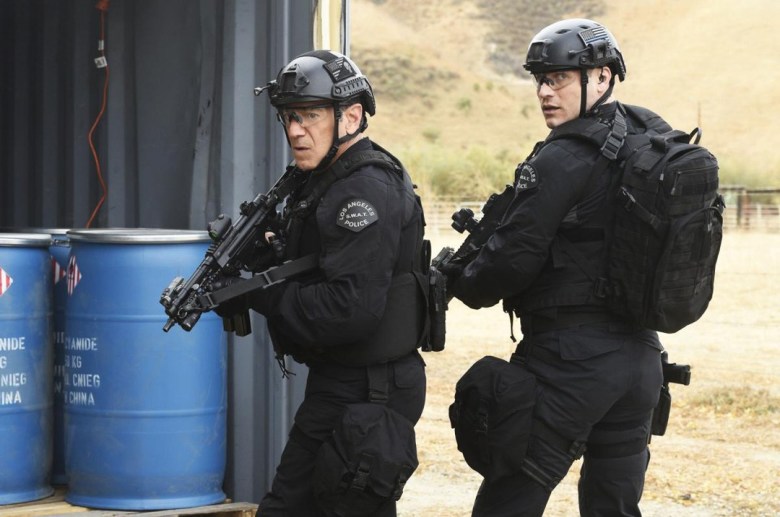 Meanwhile, LAPD officer Donna Gentry stops the blue van for an illegal lane change. Donna’s no lightweight, she scored just as high as Chris on her SWAT trials. The two white men 40’s to 50’s in the cab aren’t interested in talking to her. They make some sort of lame attempt to claim sovereign citizen status but Donna isn’t falling for it. She presses the issue when they refuse to show ID so the passenger shoots her. Donna’s body cam captures the incident right to the point of being destroyed by the bullet. The driver is shocked and calls out his name, “Crockett,” but Donna is already down.

While Donna is clinging to life and others sleuth to find the missing cyanide barrels, Commissioner Plank tells Jessica he’s ready to submit her proposals for police reforms. He even offers to have her name taken off it. Rank and file cops will turn on her. Brave Jessica doesn’t care, the people and the department need those reforms. Donna may have more bullets in her guns but Jessica has another terabyte of space on her hard drive to polish her Word docs and Powerpoints. 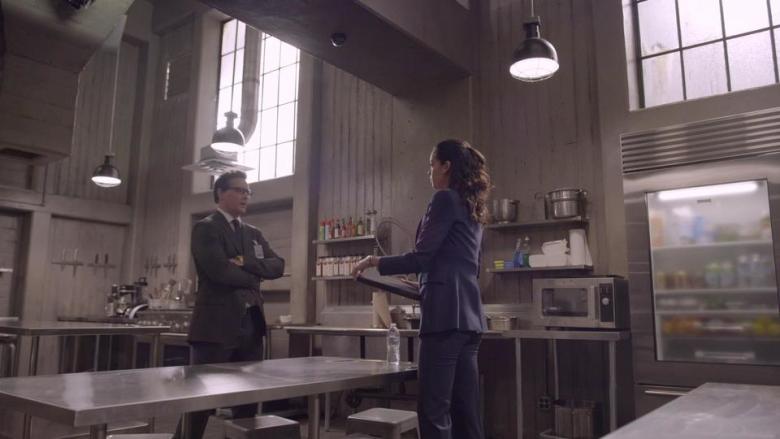 The driver is Harley Stone, he has some minor property tax related offenses and belongs to a local sovereign citizen movement; an anti-government type of group. Harley’s wife, Lara Stone lives in an apartment building close by. Hondo leads most of SWAT in a surveillance and search operation, disguised as cable guys, while Chris drops in on Donna at the hospital as she recovers from surgery.

Hondo’s apartment operation must go off without a hitch. If Lara shares her hubby’s views of the corrupt government, Hondo needs to protect her rights while squeezing information out of her. They sneak into her apartment, in accordance with their warrant, looking for equipment to process liquid cyanide to deadly gas. They don’t find any of that, but they find a bunch of unused and sad baby shower gifts. Lara returns home and Hondo takes her in for questioning. Tough Donna is recovering well and even remembers what Harley said after she was shot, “Crockett.” That’s incredible stuff, most people would have a blank spot where that memory should be. Clearly, Donna is all cop.

Hondo takes a compassionate approach with Lara. “No,” she doesn’t trust cops or the government. They took her house, a lengthy three day deposition pushed her to miscarry, and her beloved husband lost everything. That said, they would never hurt anyone. Hondo shows her the footage of Donna’s shooting.  Harley didn’t pull the trigger, but Crockett has him driving down a road with no return. Lara can’t believe Harley would support a cyanide attack, she tells Hondo about a ranch house Crockett uses for his secret meetings (and probably some secret PPV). 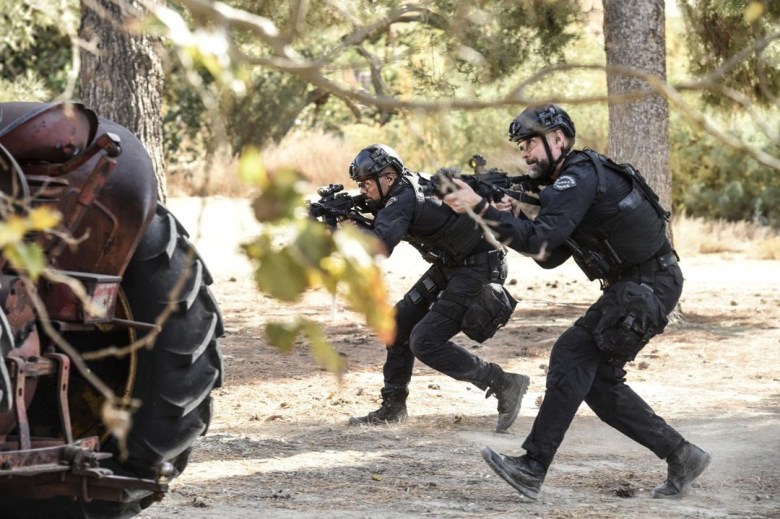 Hondo teams up with Mumford’s squad again, the ranch house is a tactical nightmare with advanced security all over the place. The sovereign baddies spot SWAT on the approach and open fire. This is another great action sequence they do well. Shoot out turns to smoke out, some of the hench surrender but Harley holds strong. They take him alive, but he doesn’t go easy. Hondo can’t get him to talk either. He lets Lara in on the interrogation and she softens Harley into spilling the plans about the cyanide attack. The target is the city’s drinking water facility and Crockett is already on the move with two other hench.

Hondo leads his hard-working crew to the city water facility.  Deacon leads one team to take the control room and save its hostages. Hondo, Street, and Chris close on Crockett and the other low hanging hench. There is another well choreographed fight and chase which culminates with Chris getting the hero shot; for Donna! Nuff said.

Back at the station, Hondo tells Jessica he read some of her proposals. He agrees people will be angry but he vows to support her reforms. Hondo – all hero, all the time. Hondo was chosen in the pilot because it isn’t his nature to walk from the hard decisions. S.W.A.T. wraps his character and action story in the best way. Hondo has a lot of good people around him, and one or two lazy administrators to keep him busy.