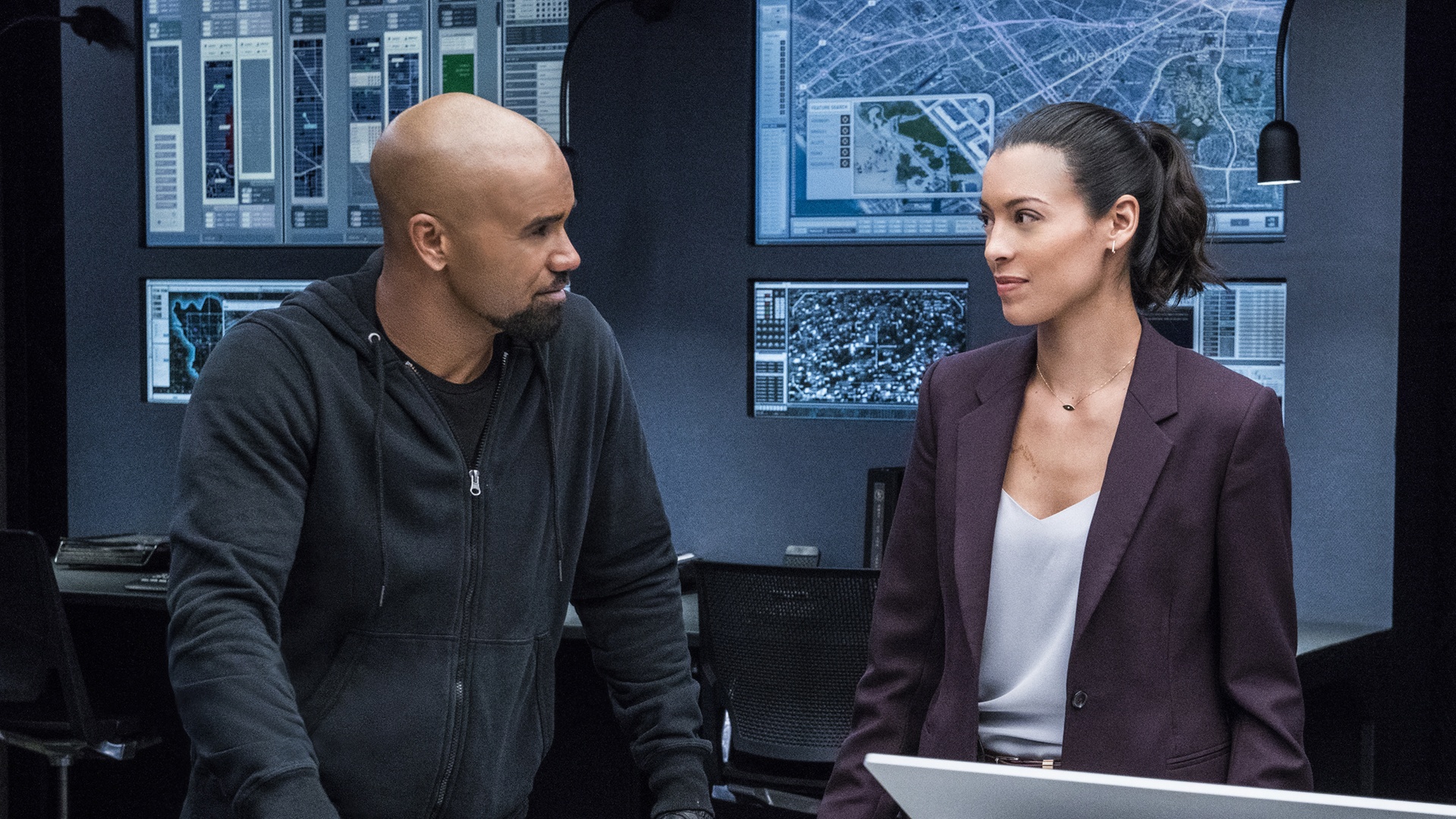 S.W.A.T. returns with one of its most well put together episodes yet. It lacked on the action that Hondo and his team so wonderfully execute in most episodes, but was big on emotion, and touched on some hot button issues our country is facing every day. It also impressed me in looking at a side from both angles, and how there could be good and evil present no matter where you stand.

The episode began with a bunch of Latino men riding around Los Angeles in a car, eyeing various people on the streets. A woman at an ATM, a guy walking a dog, a city worker working on a pothole in the street. This is a gang initiation. You may have heard that some gangs in and aroudn Los Angeles will have their members kill a random person on the street to get into the gang. Blood in, blood out, and all that. Well the young guy in the car gets out and shoots the city worker in the chest, killing him. Marilyn Manson’s “Killing Strangers” playing in the car was a little on the nose, but nice touch.

We then cut to a federal raid of a housing project in Van Nuys where the feds are rounding up suspected members of a gang working under a man named Ochoa. When one of the men swings a knife at a federal officers and the twelve people go running, S.W.A.T. is around the corner to stop them. Street chases one down and tackles him to the ground. The man immediately claims he didn’t do anything and is innocent, but Street tells him he shouldn’t have run. Cuffed, he gets him up and people are already on the street filming this with their phones. When an ICE agent asks for the suspects I.D., Street hands him his wallet. This is a no-no. 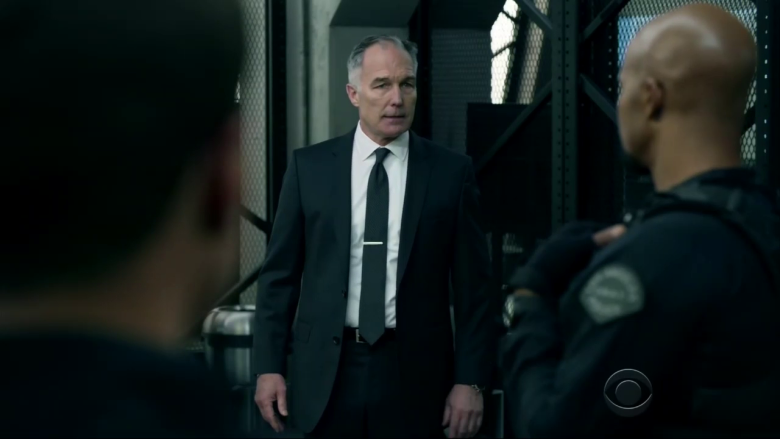 Why? Because Los Angeles is a sanctuary city. And Carlos Acosta (the suspect Street nabbed) is an illegal immigrant. By handing a federal agent the man’s information, Street was violating the oath L.A has to not hand over illegal immigrants to federal forces such as ICE. And it was captured on camera. Soon there are protestors outside headquarters causing a ruckus, and Commander Hicks is screaming at Hondo to get his team together and to capture Ochoa to give people something else to talk about.

There is other trouble on the horizon. In previous episodes, Jessica had won over Police Commissioner Michael Plank with a new policy regarding police accountability. They hadn’t enacted it yet or even gone public with it, but somehow the documents were leaked. This is not good for Jessica, as police see it as her blaming things that go wrong on the actions of the police themselves. This leads to some targeted harrassment, specifically in the form of her tires being slashed and window shattered. When she and Hondo take a look at it together, he hugs her and kisses her head. Problem is, Commissioner Michael Plank happens to spot this from his car as he’s driving by.

Meanwhile, on the hunt for Ochoa, the team first hears that he is a big heavy metal fan, so they go to a bar on the East Side that plays a lot of heavy metal. The women there don’t want to give up too much information, but tell them about a prostitute Ochoa brought in the other night who works on South Figueroa. They apprehend her, and she is bruised aroud her neck. Tearfully, she tells S.W.A.T where Ochoa was last holed up.

Heading THERE, they encounter something they did not expect, though. A couple of white guys from Oregon carrying weapons. They are part of a group of citizens called The Promise Guards who routinely try to apprehend illegal immigrants, especially ones that cause problems, and place them under citizens arrest, then have them jailed or deported. 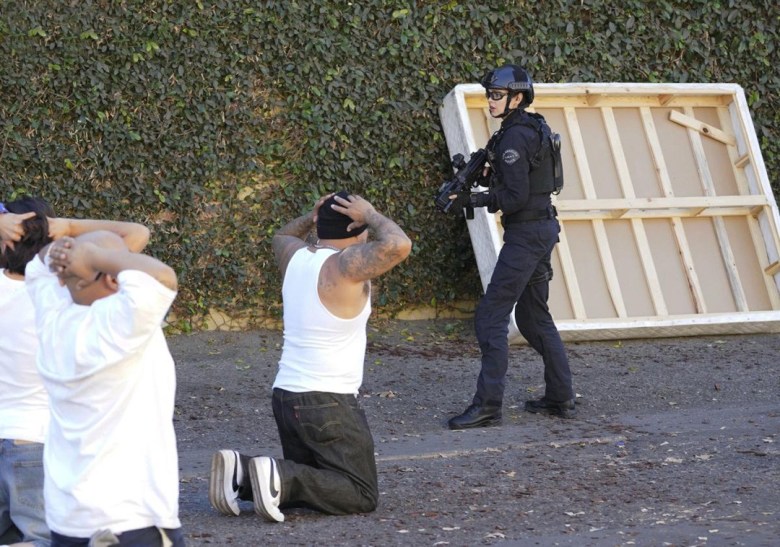 Jessica goes outside HQ to meet the protestors and pulls Carlos Acosta’s sister in to talk one on one with Street, the man who arrested her brother. She claims that they came from El Salvador to escape gangs. She was twelve, and her brother has supported her through everything. She’s now a med student at UCLA. He is innocent. Well, not long after, the feds provide photo evidence that Carlos was in fact pretty chummy with Ochoa.

They take the photos to Carlos and he is forced to admit he has talked to him before. When they ask him where he thinks Ochoa is, he explains that because his sister is DACA, and due to today’s political climate, he had inquired about where a safe place for her to hide would be if ICE ever came snooping around. Turns out there are a whole underground network of people willing to hide and house DACA people. Carlos had all that info in his phone, and one night his home was raided and robbed by Ochoa. He thinks that he may be in one of these DACA friendly homes.

They get the info of the one Carlos had specifically and sure enough Ochoa is there. They raid the home and Ochoa is arrested! Big win. However, it’s a downer when Michael Plank confronts Jessica about her relationship with Hondo. He tells her that she has to make a decision about her career or her lover. When she hesitates, Michael also goes to Hondo, who makes the decision for Jessica. He tells her that they have to break up. They both say “I love you” for the first time. And he walks away.

There are other problems arising though. Turns out The Promise Guards are planning to raid the protest Carlos’ sister is holding, kidnap her, and throw her across the boarder. S.W.A.T. moves in to stop them and of course successfully does. I like this because we so often get the brown (especially Latino) bad guys in the show. It was nice to flip it to show how people who are staunchly anti-immigration can be evil monsters as well.

Overall, it was a solid episode and one that packed an emotional punch with Hondo and Jessica finally calling it quits.