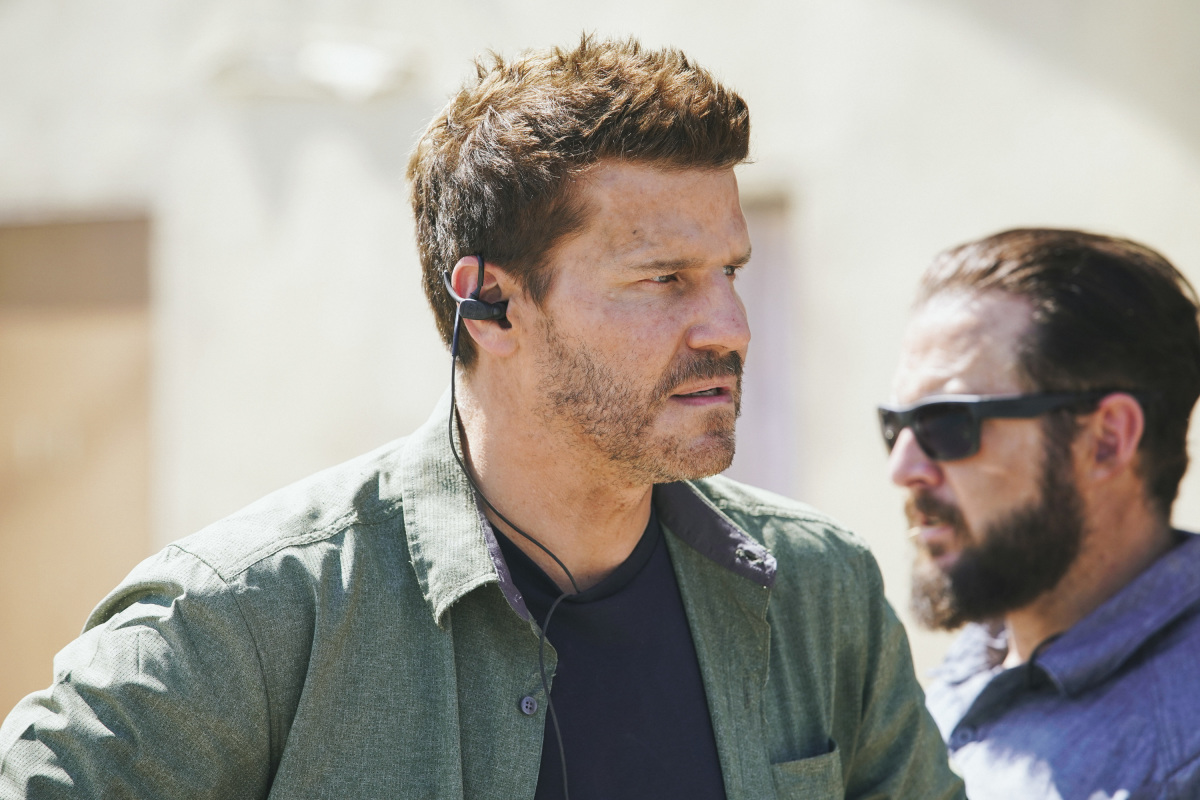 I really need SEAL Team to stop with the “wink wink nudge nudge we get your language, liberals” dialogue, because without that, it would be a totally enjoyable watch. But every time Clay cracks a joke about violating Stella’s safe space or somebody makes a joke about how not racist things are it immediately takes me out of the show, because it’s weird and vaguely offensive and, most importantly, just bad dialogue. Not at all clever. C’mon, people. Do better.

This week the SEAL Team gets sent to South Sudan. The country is heading toward civil war after the recent election, thinking fraud was to blame for the results. Because of this, they want the Americans out, and start to protest outside of the Embassy. Jason and company need to evacuate everybody they can from the country before the dam breaks, but Crowley, the acting Ambassador, refuses to give the total evacuation call, feeling it would show a lack of commitment to a positive relationship between South Sudan and the US.

Jason and the other SEALs are sent out to collect people here and get them out, but Crowley, wanting to get Jason off his back about ordering the evacuation, sends Jason to pick up a couple of American aid workers who definitely were not planning on and will not agree to leave. This sets off Mandy, who’s furious when she finds out Crowley wasted the team and put them in danger on a fool’s errand. She yells at him and threatens to “burn” him if he doesn’t give the evacuation order, and he does.

Don’t get me wrong, I’m super here for Mandy throwing her weight around and getting shit done, but… she doesn’t actually threaten him with anything specific. I’m not even totally clear on how much power or influence she has, so I’m not sure how Crowley, who seems at best mildly incompetent, would. Jason basically gave Crowley the same spiel, and Crowley clearly has no shame or remorse about putting the team’s lives in danger to get them out of his hair, as he voices the opinion that they did, after all, sign up to put their lives on the line. So I’m a little unclear about why this moment is what turns him, but whatever. They get their evacuation order. 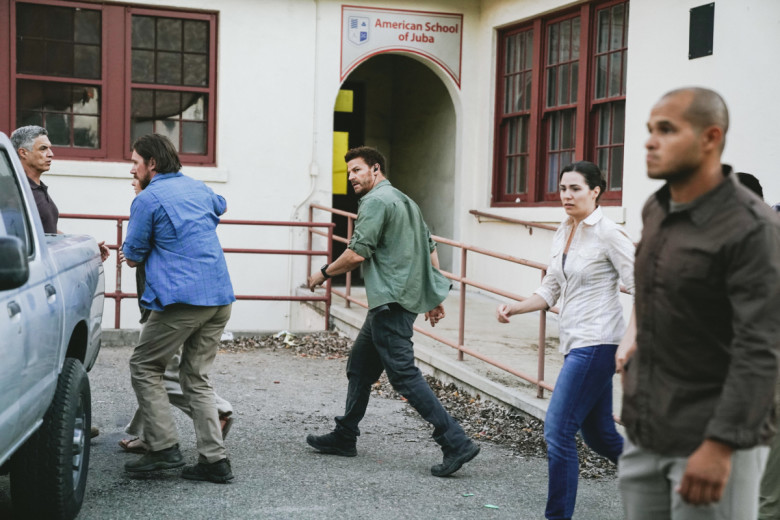 The SEALs struggle to get back to the Embassy, having to reroute several times to avoid angry, dangerous mobs. As they get nearer to the Embassy, they realize they won’t be able to get in, as the crowds have moved up to, and occasionally over, the gates in protest. Inside, Ray and Davis have stayed behind with an Embassy worker who was knocked out, and is in pretty critical condition. And if the SEALs can’t get in, they can’t get out. So they unlock the gate of the Embassy, letting the protesters rush in the front door, and freeing Ray, Davis, and the other guy to get out and into the vehicle through the back door.

They confront the acting Ambassador once they’re all safe, with on of the SEALs lookin’ to fight him, though he’s held back. Jason just gives him the folded up American flag he presumably salvaged from the Embassy, telling him that he forgot it. It’s dramatic and so red-blooded American I was waiting to see some steaks and football jerseys.

Back home, we spend most of Clay’s portion of the episode watching him hanging out with his hot friend, Brian. Stella invites them to a party at her place, where there’s the required confrontation where one of Stella’s ~hippy liberal friends~ tries to shame Clay for being in the military and out Stella as having problems with the military-industrial complex. And Clay’s like yeah, cool, I knew this, proving that liberals are silly, or something. I don’t know, this dialogue is so weird. I know a lot of hippy liberal people who can occasionally put their foot in their mouth, but I’m hard pressed to envision even the worst going up to a Navy SEAL and trying to rip on them for their service. The whole scene is very low key, but it’s somewhat shockingly rude, I think. 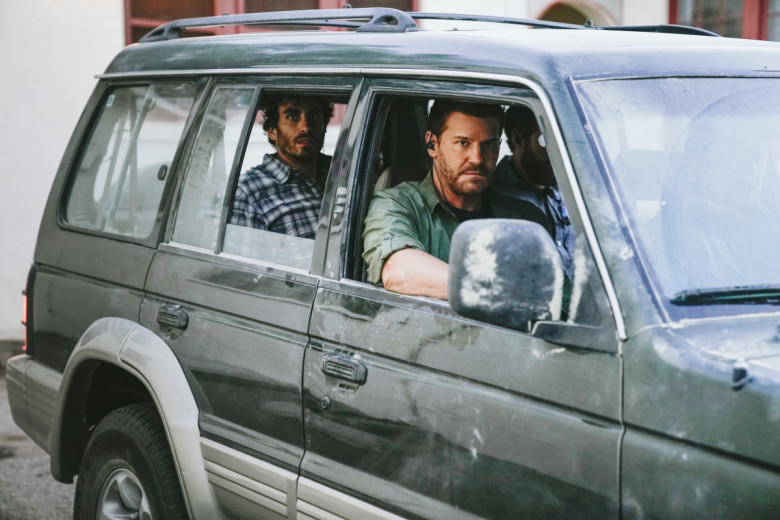 We see a lot of Clay and Brian bonding, which, if they were on the other end of this plotline I’d be totally expecting one of them to die before the end of the episode. Since we’re at home, it didn’t even occur to me — but apparently, SEAL Team wanted to bump up the stakes on all fronts. There’s a parachuting exercise, and all but one of the guys land — one parachute doesn’t open, and the guys have no choice but to watch their friend plummet to the ground. It’s a viscerally awful scene, just watching them watch this body spiral down toward the ground. Really, really horrible even without any kind of manipulative emotional close-ups or blood and gore — it’s actually pretty well and subtly done.

When the five out of six guys who made it to the ground from that group reach them, everybody takes off their masks one by one. And none of them are Brian. Since you see his parachute totally detach in the air, and him freefall to the ground, it seems unlikely he survived. Didn’t see that one coming at all.

The last facet of this episode is Jason digging into Nate’s life. He keeps being encouraged to drop it by everybody, citing the fact that once your dead, your secrets should be able to go with you. Unfortunately, Jason has matched the woman he saw at the address he visited through Nate’s GPS to a picture of SEALs on a motion. He asks another SEAL about it, who was also on the mission, and Sonny tells him that the woman died. Which we obviously know isn’t true. So clearly Jason is investigating this.

Jason also gets it together enough to clear out Nate’s locker, finally. Although Nate’s letter asks him to just burn everything, Jason finds in it a bunch of fake passports, for the woman, with the name Eva. Not sure why Nate felt like his locker on government property where he’d no doubt be subject to search at any given moment if they felt like it was the best place to keep fake passports — unless this is a navy conspiracy, rather than a Nate one — but now Jason’s definitely going to keep at this.

SEAL Team continues to be fine. It still has some weird beats, but mostly it’s pretty neat and simple and perfectly entertaining, so, y’know. Could be worse.