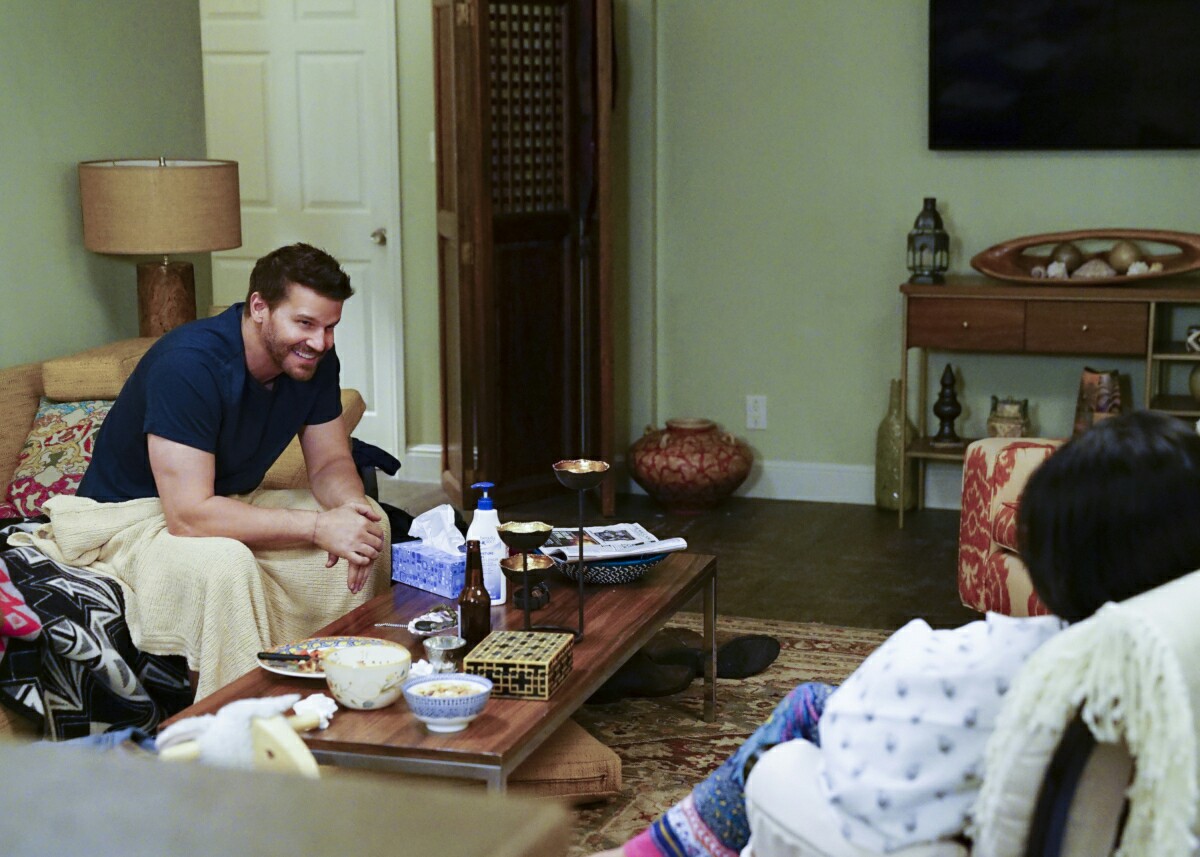 Finally, we’re merging the two plot lines on SEAL Team. Clay is now officially a member of Bravo Team, so this week we’re mostly sticking with him on his first day on the job. It’s kind of nice that we don’t waste a lot of time with Jason being resistant to Clay, but it obviously makes sense — they’re going into some seriously high tension, high risk operations, and for Jason to hold onto his resistance to having Clay on Bravo Team would just put everybody in danger. Still, as per the usual with this show, they do really simple relationship things that I end up enjoying a lot because they’re mostly quite kind, and feel genuine.

The mission this week is in China. A plane carrying a Russian doctor who was trying to defect to the US went down, and the Russians are moving in to execute him. So Bravo team has to go in, locate him, and pull him out before the Russians to get there. However, the Russians beat them to the crash, and take a lot of the useful information — they’re also the Russian equivalent to Bravo team, so the stakes get a little higher. But Bravo team has one thing that the Russians don’t have, and that’s the sniffer dog.

They use the dog to find the doctor, and convince him to trust them. But while they’re tending to his injured wife, he runs off, and they have to seek him out again. Jason takes Clay with him, leaving the other guys with the wife. By the time they find the doctor, however, the Chinese are getting closer, and it’s going to be light soon, so they have to hunker down during daylight hours so they’re not seen.

Clay and Jason have a nice bonding chat, and as we were reminded at the beginning of the episode, Jason’s hesitation with Clay has a lot to do with Clay reminding Jason of Nate. I sort of expected a little more resistance from Jason to Clay, because his last mentee died in a way that obviously still haunts Jason, but Jason steps into that role pretty quickly, making it clear to Clay off the bat that Jason might give him some shit, but he’s going to be supportive and compassionate and all around The Best or maybe I’m just projecting because of my long, long crush on David Boreanaz. Whatever, he’s so gosh darn likable. I won’t apologize for it.

Anyway, Bravo team reunites by nightfall, and start heading for the Afghan border. But they’re stopped by Russians en route, and need to move quickly because the Chinese are getting pretty close as well — Jason decides to set off some kind of flash bomb (is that a thing? Who knows) to temporarily blind the Russians who have night vision goggles on, and while they’re blinded, the team runs across the border. 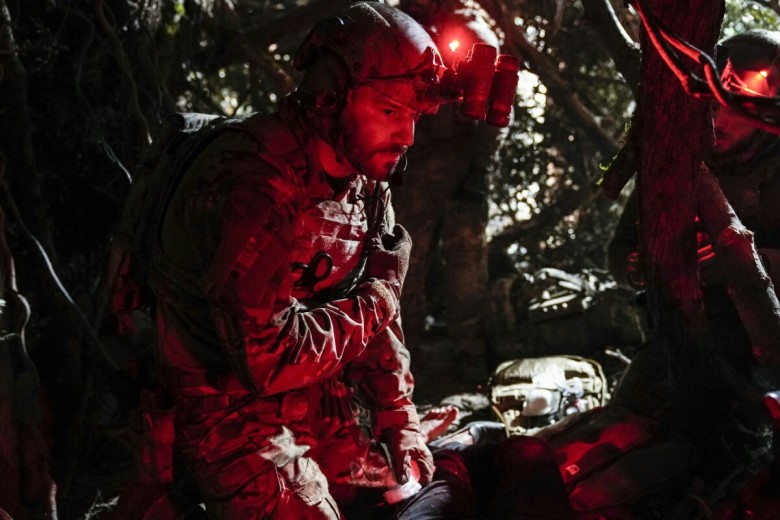 Clay gets through his first mission, mostly without a hitch. Throughout the process he made a couple of suggestions or offered insights that quickly got thrown out or shut down, but they were all very clearly things that just come with experience. For example, Bravo team takes for granted that they know where the doctor’s going — west, toward Afghanistan, because he won’t know the route but he’ll have a compass — but that fact doesn’t occur to Clay. Other than some light hazing where the guys tell Clay he’s going to owe them a case of beer any time he does some arbitrary thing, everybody is mostly nice to him about it. Again, it makes sense, because life-threatening situations that could potentially start World War III are not the place for pettiness and bullying, but since television by nature is so saturated with people acting like nutcases to generate drama (I love Dynasty, guys, I’m not ripping on this as a thing — I mostly enjoy it), it’s sort of… weirdly relaxing to watch a show where everybody behaves like a reasonable adult, 99% of the time.

On the home front, Jason has been crashing with Ray and his wife. After the mission, Ray and Jason come back a little bit drunk, it seems, and intending to go out again, but Naima, Ray’s wife, is asleep on the couch after staying up late with the baby, so Ray just puts her to bed instead. Jason, left alone, is clearly struggling a bit — probably to do with the introduction of Clay to his life on a permanent basis putting Nate on his mind a lot. He takes out his phone and opens it to Alana’s contact, but in the end decides not to call. He also takes the chain his wedding ring is on around his neck off. I’m not sure if this kind of ham-fisted bit of filmmaking is meant to communicate that Jason is going to actually tap out of this marriage or if it’s supposed to be him withdrawing into himself again after opening up a bit to people in his life the past couple weeks, but either way, it’s not good.

Sort of on that note, I’ve been kind of waiting for this marriage to resolve/dissolve because it’s always seemed like we’re going to get Mandy and Jason together at some point. I have hesitations about this for a lot of reasons, but like, look how cute they are. (This is a very important academic point.) 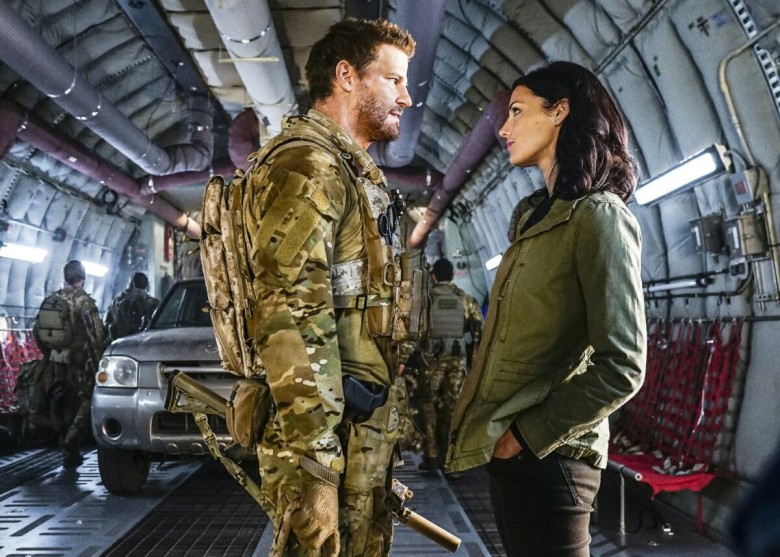 Alright, back on topic. We also get a bit of Sonny’s personal life. He’s been trying to reach out to Danny, his colleague whose injury biased him on the mission last week, but Danny isn’t responding. Sonny talks to Davis about Danny, and we find out that Sonny wasn’t necessarily there for Danny when he was injured. He clearly regrets it, now.

Clay and Stella are more or less living together, and we get something that I’ve really been wanting from this show, mostly out of curiosity — Stella points out to him, when he gets back, that his first day on the job turned into a week. I’ve been wondering this whole time exactly how time passes. It’s not hugely problematic, at least for me, because I don’t mind being like “eh whatever” on that front, but they’re flying halfway around the world on a regular basis and spending an undefined amount of time on travel and on missions and then they come home, and till now it’s sort of seemed like they’re only gone for a day or so, which makes no sense. The stress this job places on the spouses of Bravo Team makes a lot more sense now, realizing that a mission could be a day or could be a week or possibly more, where somebody you love is who knows where doing who knows what. No doubt this will be an issue for Clay and Stella going forward.