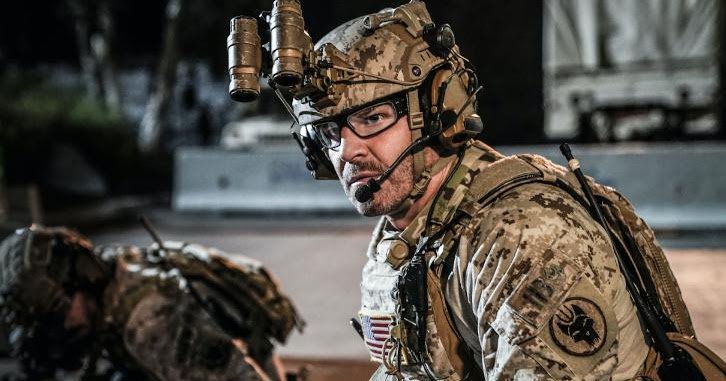 Somewhat grudgingly, I have to admit, SEAL Team has become a fairly solid show. It’s not going to change the game or change any lives or shift your entire perception of the universe, but it’s got a solid cast of characters who occasionally say something meaningful, it’s got some emotional depth, it’s got a larger conspiracy, and it’s got the week-to-week operation. There are things about the show I still don’t particularly like, and I still don’t feel like it’s something I’d voluntarily tune into every week, but now that we’re well into it, all the parts seem to be working well together. No one is more surprised than I am that I don’t really have a lot to be angry about in this show, believe me.

We mostly split the episode between Jason and Clay. Before we split off, though, we see all the guys at lunch, commenting on how listless and out of it Clay looks, following the death of his friend. There’s some interesting (for me, at least, but then I’ve only ever worked in creative fields, so this whole lifestyle is foreign) conversation about it. At first, it feels a bit heartless — a lot of the guys on Jason’s team are pretty hard on Clay’s obvious heartache, especially Jason. But Jason goes on to point out that if Clay can’t handle losing a friend, he’s in the wrong line of work, because it’s something they have to deal with. And if he can’t emotionally handle losing a friend in a training drill, he can’t be trusted in a combat situation — you can’t have a soldier who goes catatonic if his buddy is killed in action. The conversation just struck me because I was ready to be hardline annoyed with or angry at Jason and company for being so harsh on an obviously grieving man. But they have a point.

To soften Jason’s practical sentiments, as he gets up to leave the cafeteria (is that what it’s called? Whatever, you get what I mean) he pauses, making eye contact with Clay, and giving him a manly nod of solidarity that makes Clay smile a bit. It’s quite a nice moment, actually.

Once we split off their stories, Clay’s becomes about delivering the news of Brian’s death to his next of kin, as designated in Brian’s paperwork. Clay knew Brian well, and so he’s heard quite a bit about Brian’s family, or so he thought. But the next of kin listed on Brian’s paperwork is a Lucy Denise, and when they go to the address, they find a diner called Lucy’s, and a waitress named Denise. She’s not Brian’s mother, but she remembers him, because his mother used to use the diner as free daycare while she went out and did whatever shady stuff she was into.

They look into Brian’s biological mother, and find she’s dead. After some investigation, they find out his father is as well; killed shortly after being released from prison. They visit a foster home Brian stayed in at some point, and then circle back to the diner, where they ultimately deliver the news of Brian’s passing to Denise, the waitress. She’s clearly impacted by his death, and sad for it, but she didn’t know him, or raise him, and expresses how sad it is that there’s no family to tell what happened to Brian. Clay points out to her that although his family may have been difficult or at best, simply not present, he had people who looked out for him — Denise, namely, and the guy who ran the foster home. It’s paltry, but it’s something. The superior officer who’s with Clay points out to Clay, later, that his unit is his family. Clay sort of scoffs at this, but this is clearly a central issue for Clay he needs to work out, and Brian presents a nice foil to Clay, even posthumously.

While Brian pieced together a family to support him from what he could find, Clay, who was also more or less abandoned by his parents, became an island. Since one of the issues we learned Clay has in the first couple episodes is being part of a team, hopefully he’ll learn something from his brief look into Brian’s life.

Jason, meanwhile, struggles with this week’s mission, as his team is combined with another team, lead by Beau Fuller, a rival of Jason’s. The mission is going to be in Saudi Arabia, but since they’re one of the US’s main oil partners, this extraction has to be quick and quiet and with minimal if any casualties so as not to jeopardize the relationship with an ally. The first plan presented comes from Beau, and Jason immediately rankles at this new authority. There’s some back and forth over the proper way to enter a room — Beau wanting to do it by the book, which potentially risks the life of civilians, and Jason wanting to do the riskier move for the mission that has a lower chance of catching anybody in their crosshairs.

Neither Jason nor Beau’s plan works, in the end, and the mission is called off. Beau and Jason get into a massive fight, where Beau implies that Jason’s fly-by-the-seat-of-his-pants approach and tendency to improvise is what got Nate killed. Jason and Ray, once they leave the situation, also get into a fight. Beau’s a black man, like Ray, and Ray has a great speech where he points out to Jason all the ways in which black men in the navy have it harder — how when you’re looking for someone to yell at during training, and you’ve got a sea of white faces and one black guy, he’s the one whose name you’re going to yell in reprimand. How Ray was picked for the team because he was the absolute best there was — which is what you have to be, to succeed, as a black man, whereas white men just have to be very good. Jason doesn’t really respond to it, and Ray couches it as a “Beau’s still an asshole, but you need to consider where he’s coming from” but it’s a really great conversation, that eventually translates into a little more compassion from Jason. 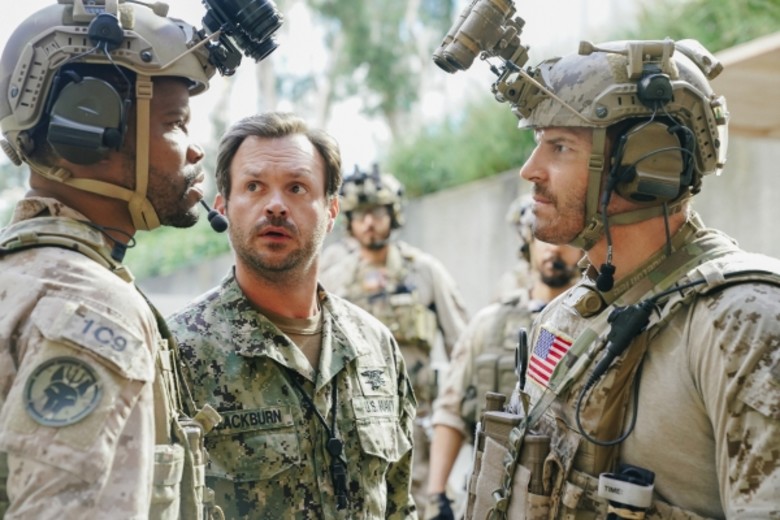 Jason has an epiphany about the air ducts on the bunker they’re meant to be infiltrating, and they find they were added after the fact. They rehearse the new plan, courtesy of Jason, and he and Beau get along. I would’ve found this whole thing more effective if it were Beau proposing the new, improvised plan, and Jason supported it and worked with him, showing that Jason now understands the systemic prejudices preventing Beau from going off book in the way that he does, and that they’re both willing to work together. So I was more than a little disappointed about that.

Even though they run the new plan successfully, the mission gets called off in the end, because their target was relocated before they could get there, because of a combination of bureaucracy and how long it took them to find a workable route. Though they’re slightly disappointed, we’re left with the guys from both units agreeing to go to a breakfast buffet in a gentleman’s club together, showing team unity, etc. etc.

We also see Jason go to visit the woman who Nate had a passport for, just to talk about Nate, since Jason is still clearly haunted by Nate’s death, but refuses to see a therapist. That’s another point on which I’m a little disappointed; I get who the target audience is and I get that Men Don’t Talk About Feelings or whatever, but it seems like for both of those reasons, it would be a pretty great thing to have Jason admit he needs help and seek therapy. But I guess therapy comes in many forms.

Could’ve done without the gentleman’s club, but all in all, it was a pretty solid episode, well-balanced between emotional character beats and some fairly entertaining action sequences as the guys rehearse for their mission.